Tropical birding is not for the impatient.  For the most part you're working to pull out birds in ones and twos from dense jungle vegetation.  However, now and then, a person can come across a mixed flock, and there is no more exciting a mixed flock than an antswarm.  I'd never found one before, but that was about to change as we headed back to the trailhead in the heat of the early afternoon.

A pair of Bicolored Antbirds heralded the flock, flying out from the undergrowth to land next to the trail, give a couple of harsh call notes, and then dive back in. 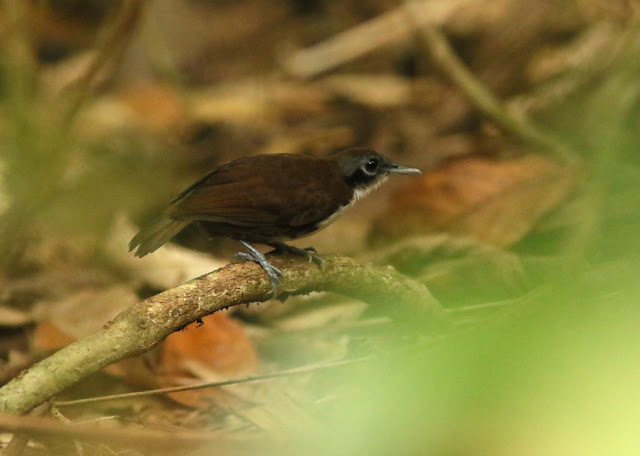 Unlike the Chestnut-backed's we'd seen earlier in the morning, Bicoloreds are professional antswarm birds, only uncommonly found without ants.  When a couple Song Wrens started beat-boxing we knew we were onto something good. 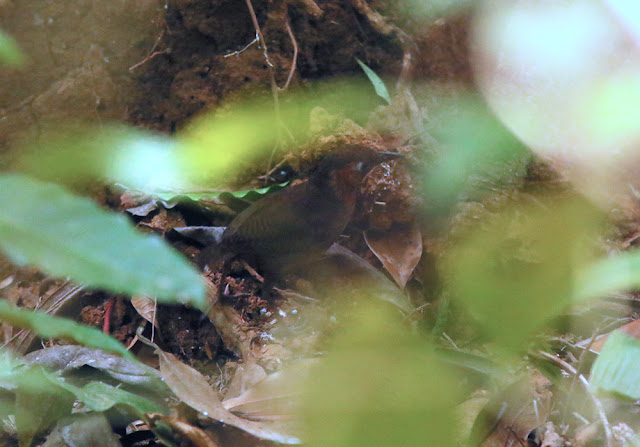 Song Wrens are unique creatures.  The book describes their song as a haywire cuckoo clock, which is fairly apt.  They alternate clear Beet-Boop whistles with a rollicking soft buh-duh, buttah-buttah base line to create a song that really is like nothing else.  It's well worth pulling up on Xeno-cantu if you haven't heard it.

I'm not sure I can really paint the picture of the antswarm.  Different species worked the forest floor, mostly staying at the periphery and then darting into the area that the army ants must have been scouring.  A Black-faced Antthrush ran atop the leaf litter while the Song Wrens would actually duck under to forage rapidly beneath the leaves.  The antbirds moved much more methodically, stopping to preen or remaining in a secluded dark perch before dashing out after an espied disturbed insect.  Our lifer Ocellated Antbird favored the latter approach, staying well hidden. 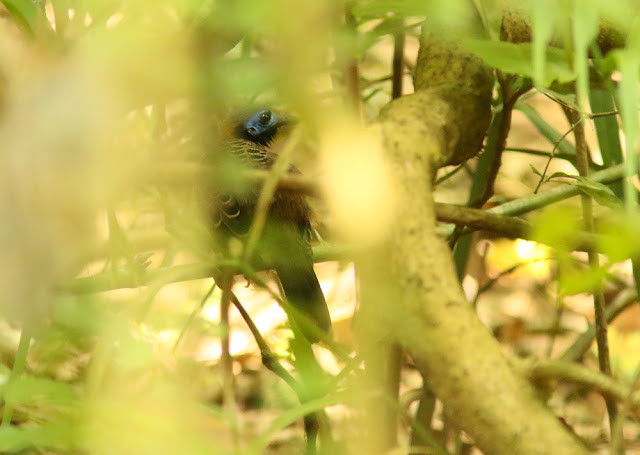 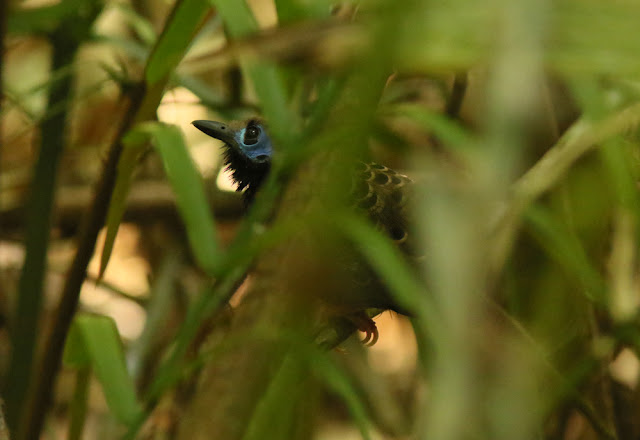 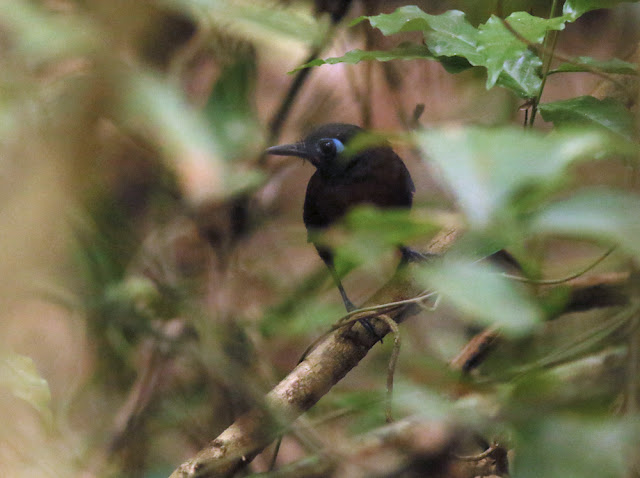 The sounds were a study in contrast between the harsh alien cries of the Bicolored's, the semi-manic Song Wren, and the slow crescendo-decrescendo song of a hidden Streak-chested Antpitta singing up and down a clear clean minor-key scale.  The pipsqueak calls of antwrens added a layer to the visual and aural experience as they moved about the midstory. 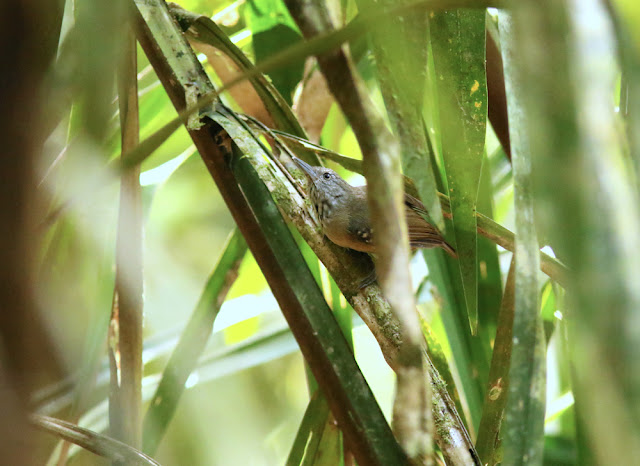 This is a fairly freshly fledged juvie. 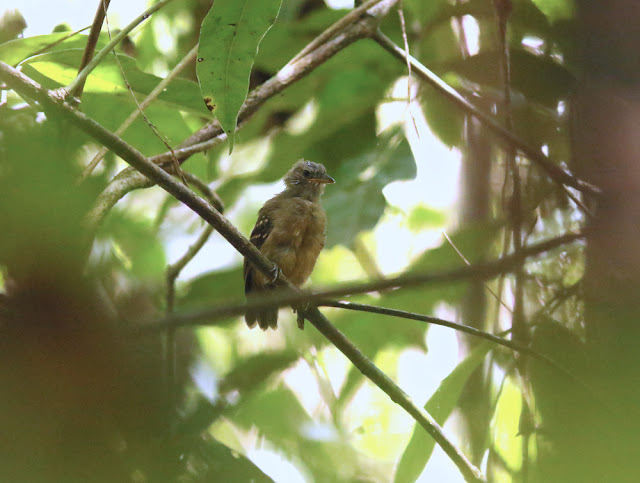 We wouldn't encounter White-flanked Antwren again until the last full day of the trip. 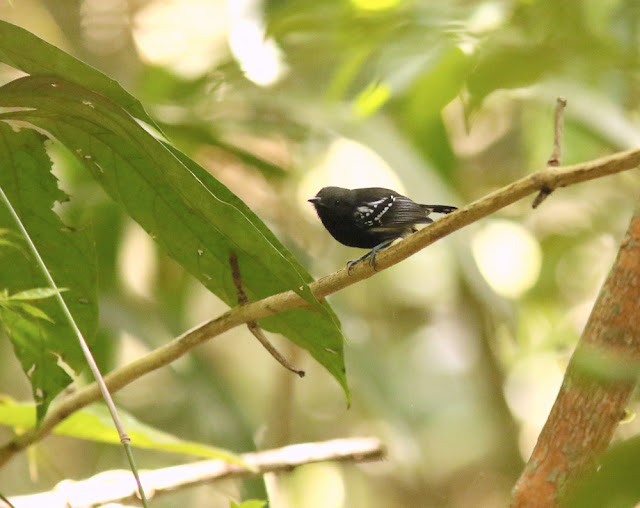 A Barred Woodcreeper was about triple the size of the antwrens. 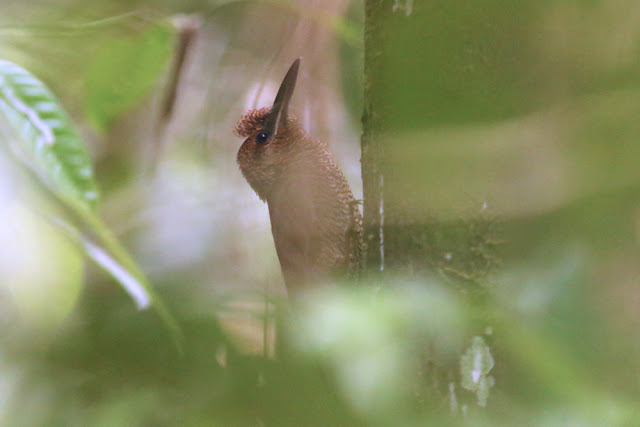 And above the mid-story, interior forest flycatchers peered down looking to snap up insects attempting to completely bug-out.  This odd little bird is a Ruddy-tailed Flycatcher. 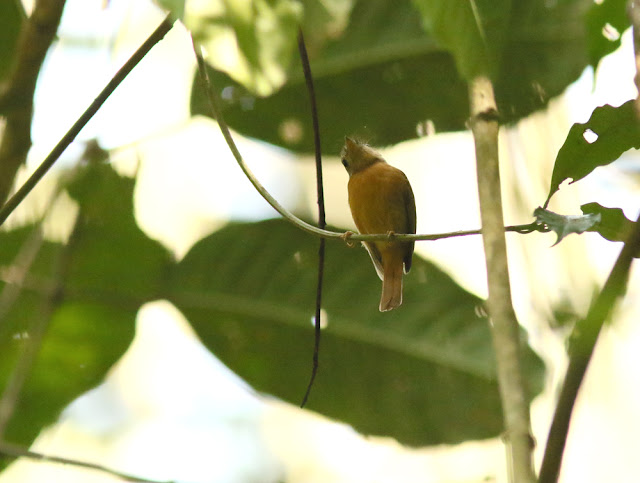 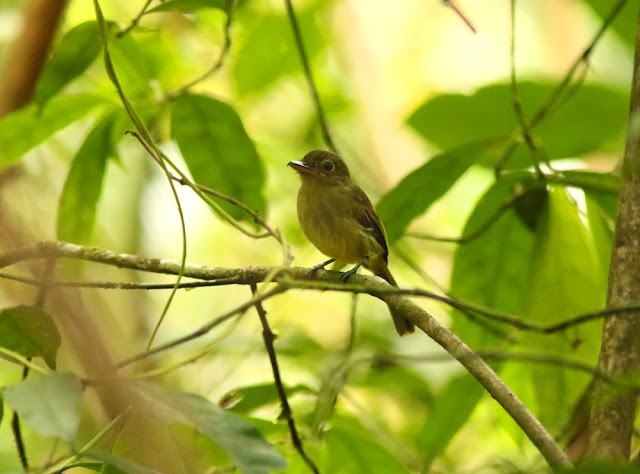 While the Antpitta would remain hidden for this day at least, and there was no Ground-cuckoo miracle (though you're as likely to find that rarity on Pipeline as just about anywhere in the world), the hour or so we spent with this antswarm before it dissipated was one of the most rewarding experiences I've had in the natural world.

Thanks for recommendation on listening to the Song Wren. It really is a different sounding bird.