or peregrination, if you will.  Clearly it's lost.

Do you ever wonder where the birds you see came from?  Certainly we get our share of high arctic birds with shorebirds and jaegers winging south.  Can't you just imagine a Peregrine high on some cliff overlooking the tundra?  Here's an adult Peregrine from Tiscornia last month. 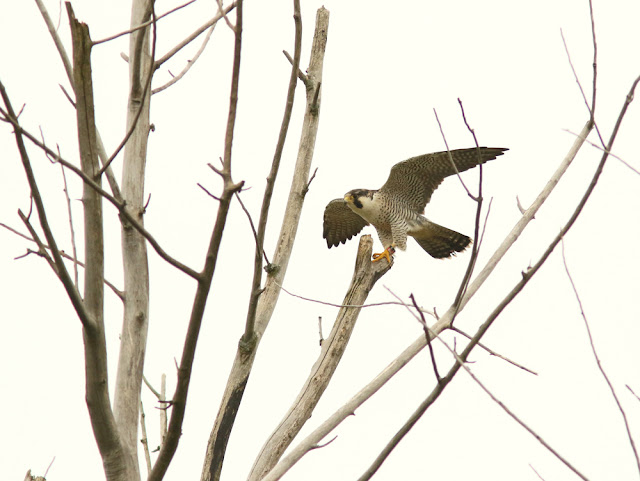 And if you look carefully it's banded... black over red on the left, D83 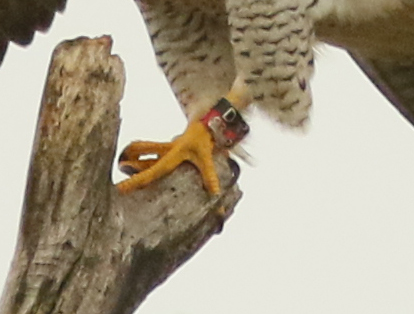 Another look as it flies off 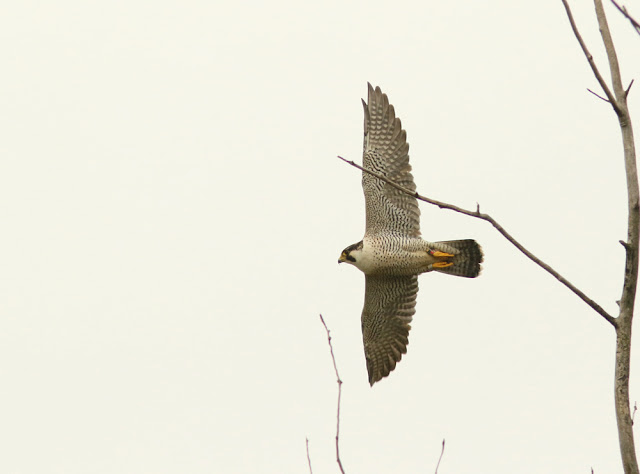 But from what farflung crag did this bird originate?  Where was its aeyrie sheltered from the sting of polar winds? Uhhh, well, after researching the band, that would be a steel mill in Gary, Indiana.  Oh well.

Not surprisingly there weren't a ton of shorebirds hanging out on the beach that day.  There've been a few since, here a first-fall Greater Yellowlegs, not a super-common species at Tiscornia. 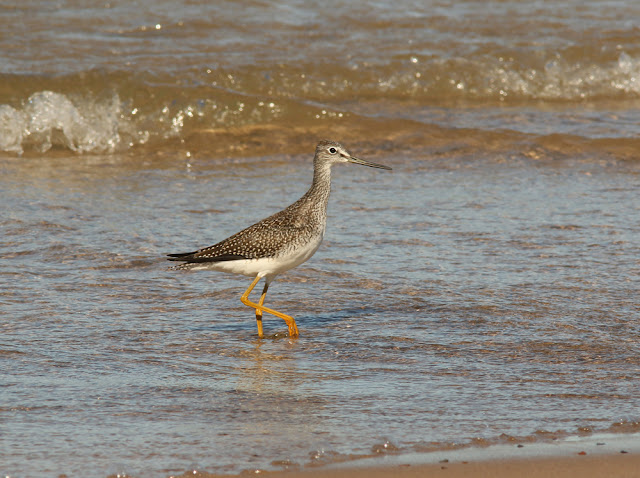 I waited for the sun to rise to illuminate this young Black-bellied Plover a few days ago, it flew just before however. 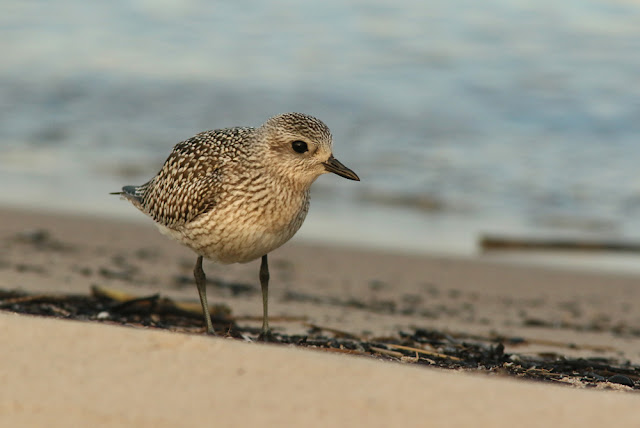 I think a different bird in full afternoon sun actually turned out better. 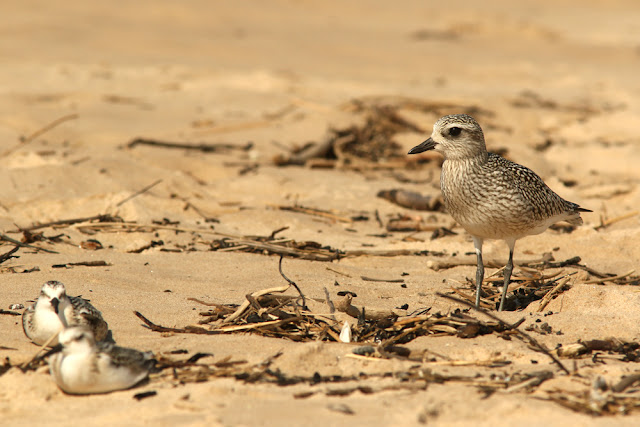 1000. Give or take a few (with one documented by Satellite imagery).  But 1000 is what my spreadsheet says.  Of course Tim's number is probably at least quadruple that.

It was a pleasant morning, highlighted by a flyby Parasitic Jaeger that I think Josh Kamp picked up.  It was fairly close as far as jaegers go. 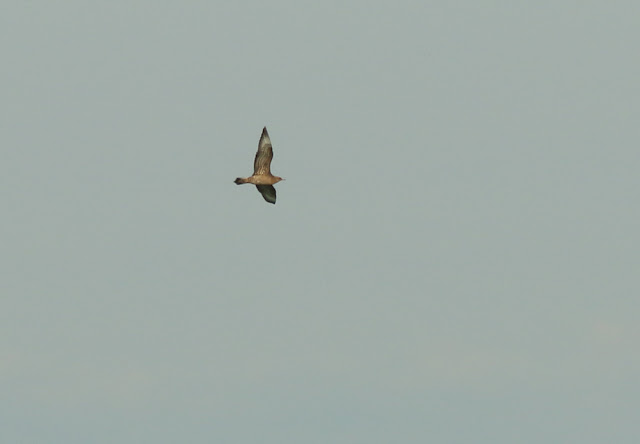 They aren't great portraits, but you can get a sense of the overall warm coloration of the bird (wrong for anything but Parasitic), the tail projection, and the bill length (too long for Long-tailed), among other features.  The next pic shows pale terminal edging to the primaries which Olsen and Larsson state is diagnostic for Parasitic when present. 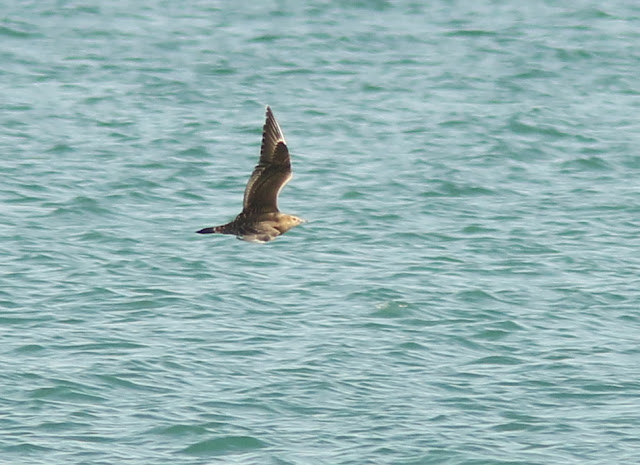 Jaegers are one of the hallmark birds of Tiscornia, so it felt right to have one this morning.  I've seen the other 2 species but never photographed them definitively enough for the committee.

An immature Great Black-backed Gull has been hanging out for about a week as well, fairly early for them here. 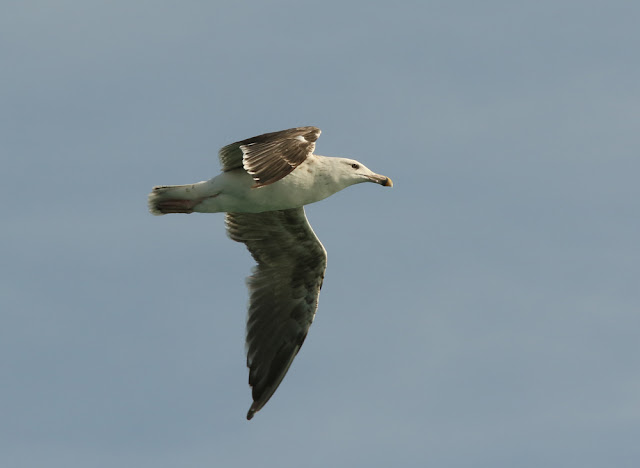 I've photographed 16 species of gulls at Tiscornia, highlighted by singleton Glaucous-winged, Black-headed and Sabine's (a bird I would have predicted I'd have had more frequently), Little Gull and Kittiwake a little over half the years, and Franklins and Laughing most years.  I probably had a Black-tailed once in February several years ago but it was too distant to be certain of.

Sanderling is surely the most common shorebird at Tiscornia, one that's quite rare any distance inland. 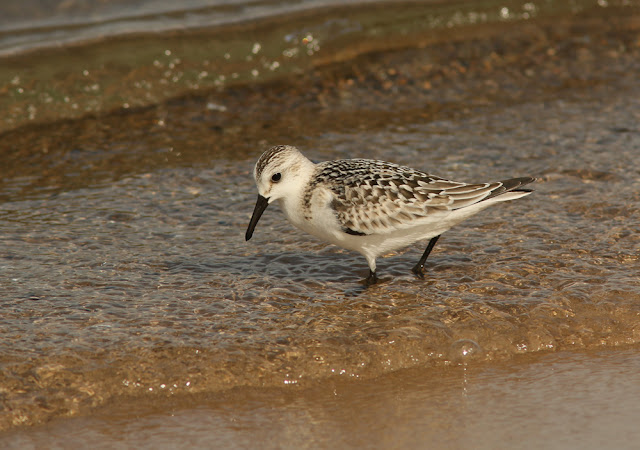 I'm missing a few odd ones since there isn't any mudflat.  Solitary Sandpiper has the opposite water preferences from a sanderling; I've never seen one at Tiscornia.  All 3 phalaropes are on the list though.  Upland is another that Tim's had several times and others have had at least once that I still need.

Warblers are moving; there's a few brushy corners that have had good birds over the years.  We had a Chat once in the tangle this Magnolia was in. 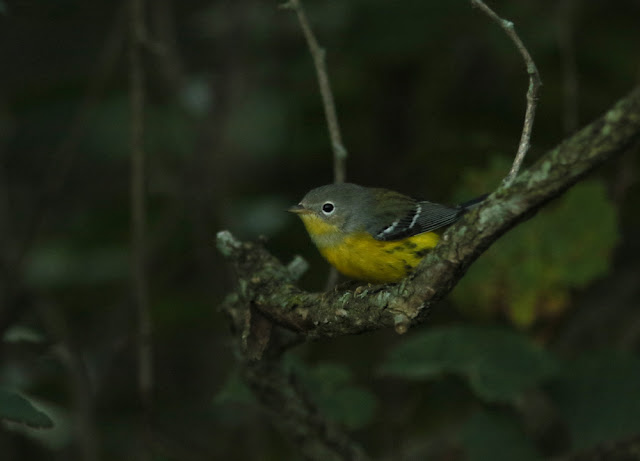 I've had 26 warblers at Tiscornia.  Blue-winged is probably the most common one missing.

All told I've had 254 species at Tiscornia.  The commonest one missing?  Probably Hairy Woodpecker; they just don't seem to explore outside the forest the way Pileated will.  I would have predicted I would have had White-fronted Goose (I have it from New Buff harbor), and that an eider or Barrow's Goldeneye would be on the list, but I guess maybe I'll have to go back once or twice more.  Or a thousand times.

The bird was Magnificent, the photos...

Tim picked up another Frigatebird (the 3rd for each of us at Tiscornia, involving 4 different birds over the years) at the base of the pier and called those of us on the end to tell us to look back for it.  It was a much tougher spot than I expected, about 600 yards away, backlit, and frequently below the tree line.  Eventually it popped up above the trees. 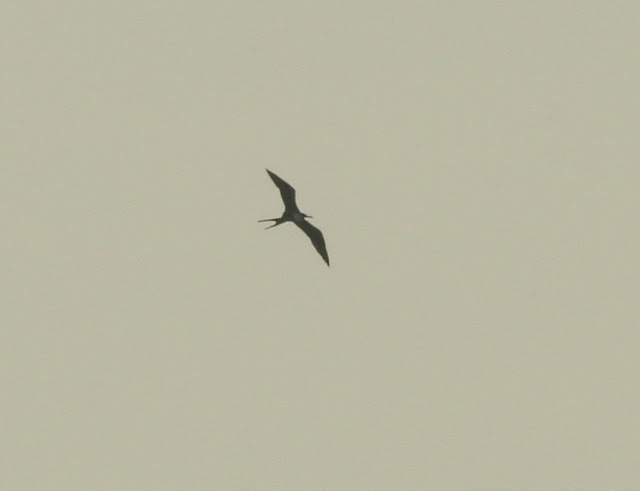 What to do with not-so-great distant photos? Make a montage of course.  You can get a sense of the alar bars though it's pretty backlit. 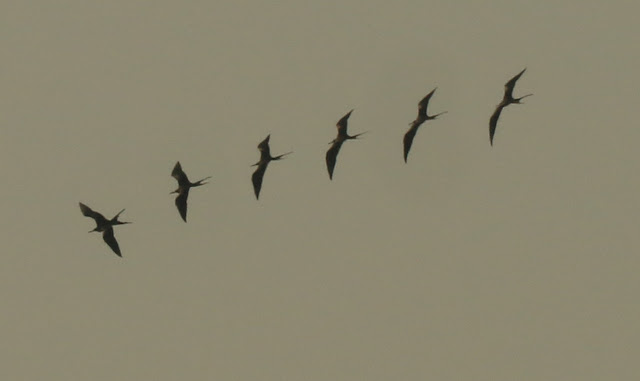 I had the presence of mind to thumbwheel it up 2 F-stops to compensate for the backlighting trying to document the pattern of the underparts better.

I would say that the white underparts do not extend significantly onto the underwing, eliminating Lesser.  It would be hard to eliminate Great on these photos, but Tim's from a quarter mile closer has a nice pointed throat/bib; sub-adult Great Frigatebirds have the black of the head cut off where the throat meets the breast rather than extending in a point onto the breast.

My first Frigatebird at Tiscornia followed Hurricane Ike (which came out of the Gulf a couple weeks before), the 2nd (the bird that we watched land on the lighthouse) was not long after an Atlantic hurricane (but was photographed in Kansas before it arrived at Tiscornia); the previous Berrien records had followed Gulf Hurricanes.  This bird follows the tropical storm that flooded Louisiana a couple weeks ago and likely follows the Gulf pattern.
Posted by Matt at 3:25 PM 1 comment: