Got out on the boat for a half day today. It wasn't quite calm enough to be able to find a lot of loons on the water; we had considerably more success chumming in the gull flocks. One contained an adult Thayer's Gull. It made a number of circles around the boat. 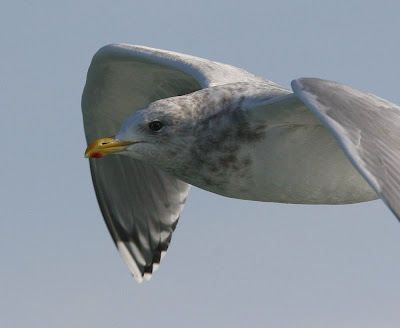 They average neater shorter bills and more head smudging than the Herrings.
The eye in full sun in the photos is flecked smoky gray, though appeared dark in the field. 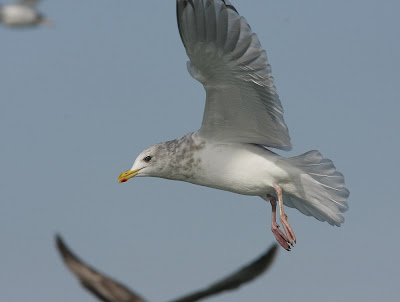 The bird stood out most as being a white-winged gull on the underside of the wings. 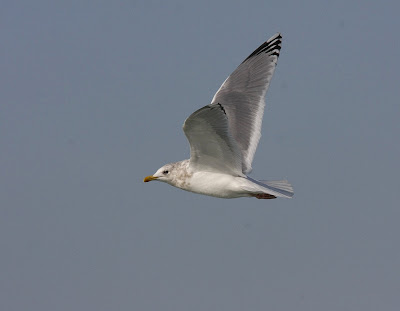 Here's the famous Venetian blind pattern to the upper primaries. Per the books Kumlien's and Kumlien's-Thayers integrades generally do not have a completely black leading edge to P9, and most lack any black on P5. This one has more black on the leading edge of P9 than our Thayer's gull at Tiscornia this winter. 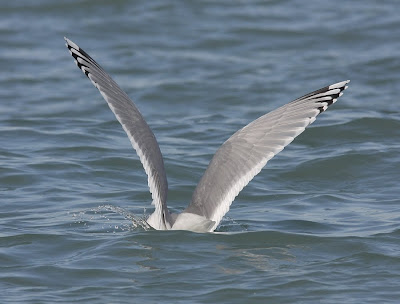 Juvenile/first winter plumaged birds are the other most common age group to see. Here's a first cycle Thayer's with a first cycle Great Black-backed at Tiscornia from a week or so ago. 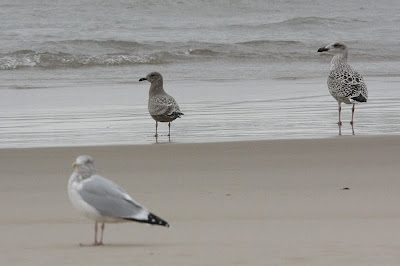 Note again the small bill, as well as the primaries much paler than a Herring would show.
Again, Thayer's is a whitewing from the underside. 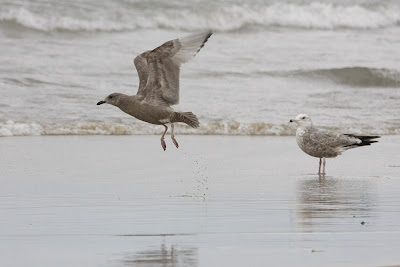 The first cycle bird also shows a Venetian blind pattern to the primaries to some extent. 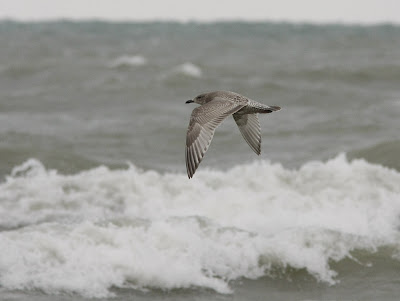 The darker secondary bar is a good mark to separate Thayers from a dark Kumlien's.
Now the trick will be to try to find a 2nd and 3rd cycle Thayer's.
Posted by Matt at 5:57 PM No comments: 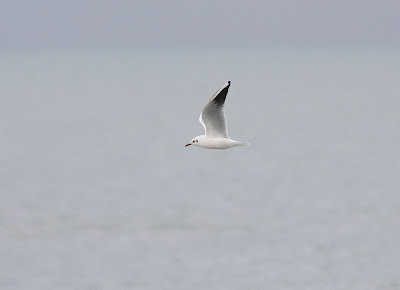 From above the bird has a Bonaparte's wing pattern with a leading white triangle. The black under-primaries, however, are unique. 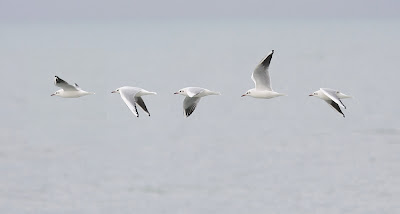 Here's what the bird looked like as it appeared in my scope flying towards me. 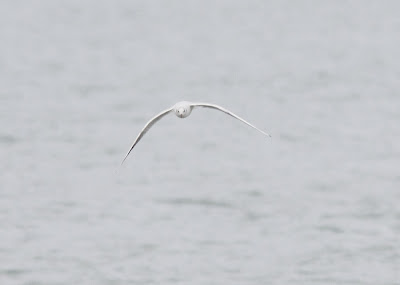 I could pick up some slight reddish at the bill base, and the black ear spot seemed finer than a Bonaparte's would be, but flying head-on I couldn't convince myself of the black primaries. In hindsight, I could have called it out immediately; adult Bonaparte's don't have reddish at the bill base (I'm gonna say I was thinking of Franklin's since they can show a reddish bill base this time of year). 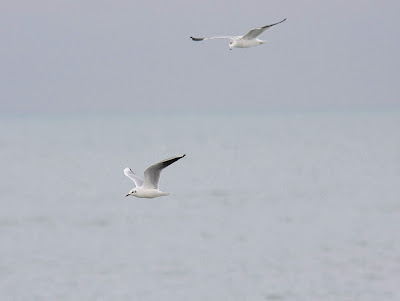 It flew in with a Ring-billed (which briefly harassed it). The only other Black-headed that I've seen was an over-wintering bird along the Chicago lakefront. That bird, also an adult, was hanging out with Ring-billed's, so maybe they're not as tightly associated with Bonaparte's as we thought. They're certainly closer in size than one might expect.
Posted by Matt at 11:14 AM No comments:

I swung by the New Buffalo area a couple days ago. While quickly scanning through the gulls in the howling wind I fairly quickly picked up the hybrid dark-mantled gull that's been kicked around as a Chandeleur Gull, Great Black-back x Herring, or who knows what. 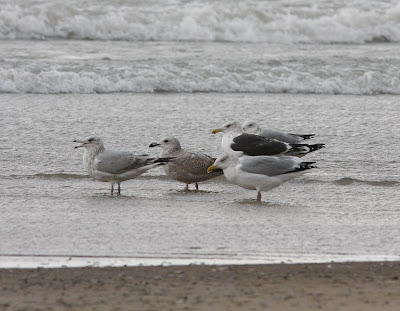 We haven't seen it at Tiscornia this year and thought he might have joined Hughie. He hadn't. 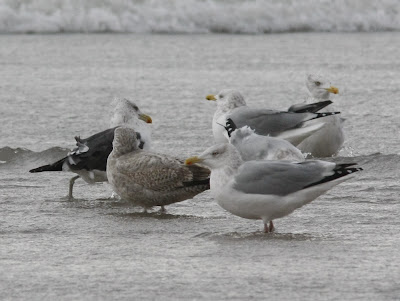 There's always some semi-odd gulls in the New Buffalo flock (though with 300 Herring Gulls, simple probability says that 1% of them will be outliers). This first fall bird (no longer a juvie with first winter back plumage) is a lot more white-headed than the average first year HEGU. 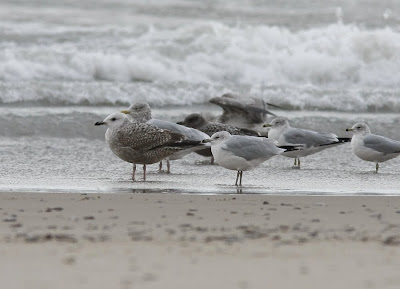 If this bird was on the other side of Lake Michigan I bet a whole bunch of people would be desperately gripping for a Euro Herring Gull, especially if you compare it to a recently arrived juvenile Herring Gull in fresh dark plumage presumably from the high arctic. 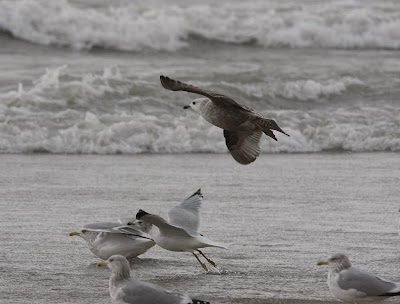 From my extensive experience in chucking a gull book in the air and seeing what page it falls open to randomly for ID quality assurance purposes, Euro Herring Gull supposedly has a much whiter rump among other points. 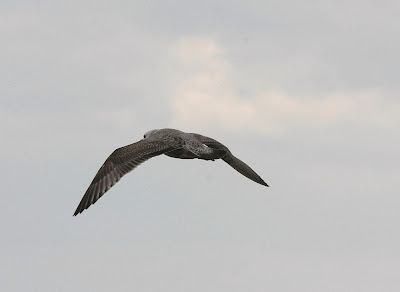 This one looks pretty normal.

Despite seeing triple digit numbers of Red-throated Loons every year, I'd never had a good look at one in breeding (or near-breeding) plumage. This bird appeared off the pier a few days ago (the same day as the Arctic Tern in fact). A few white feathers are starting to appear in the face, and the bird is moulting all of its primaries (it can't actually fly at present). Pyle states that Red-throated Loon does indeed moult all of its flight feathers prior to its pre-basic moult into winter plumage, usually in staging areas away from the breeding grounds. 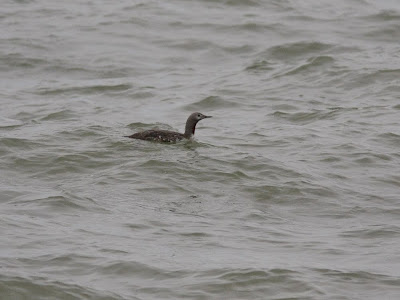 This is the more traditional look to Red-throated Loons. This bird was actually calling, it sounded more like a Caspian Tern than a Common Loon. 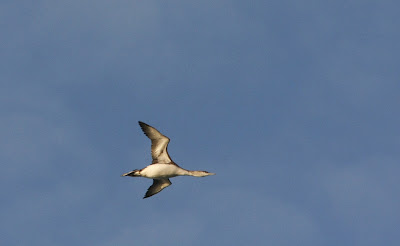 This Common Loon flew past the pier at close range. I'd never noticed the vent strap before. 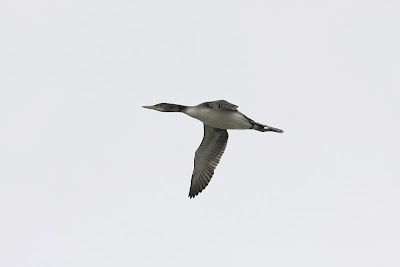 A couple White-winged Scotors also made a close pass that day. 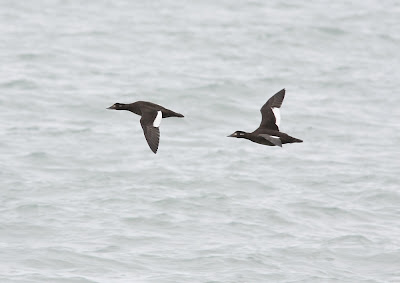 Finally a montage of a flyby White-winged Crossbill in Warren Dunes. It was the second day in a row I'd gone up into the dunes hoping for Goshawk or Golden Eagle and gotten a different year bird (Tundra Swan the day before).