A Sabine's Gull was seen yesterday for about an hour or so about 5 miles north of the BBC field trip and 10 miles south of where we were sitting on the end of the pier.  It was a muggy day and nothing was moving around.  But, word of the bird didn't get out until the evening, leaving one of my biggest nemesis and most desired birds firmly anchored its status quo.

I walked the section of beach where it was seen yesterday under much different weather conditions, I didn't really expect to see it.  I didn't.  At times the mist and fog were making it really difficult to see and I was about 15 feet from this Baird's before I saw it as it flushed.  Its flight call sounds like a Sanderling giving the call through clenched teeth.  I found the bird a little further up the beach at Tanner's Creek. 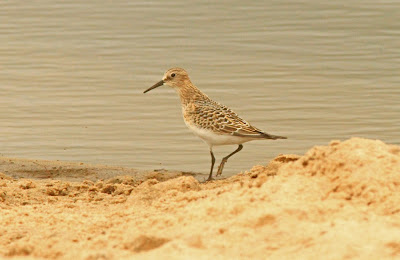 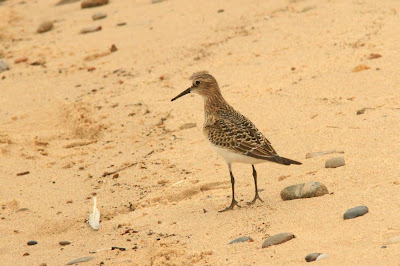 The biggest differences between it and Semipalmated Sandpiper (below from Tiscornia today) are structural:  a longer bill, longer neck, and primaries that extend beyond the tail.  They have much more of a scaled look at distance than the Semi's do though you wouldn't know that due to the distance differences between the two pics. 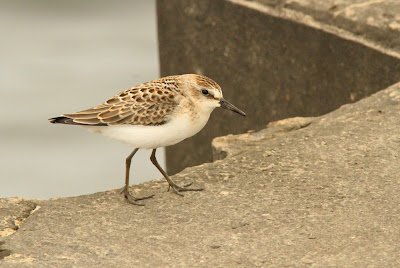 The semi's shape is a little off hunched into a north wind.

The Sabine's was with Bonaparte's.  I saw 4 Bonaparte's along the Warren Dunes - Weko stretch and we had a few yesterday go by Tiscornia. 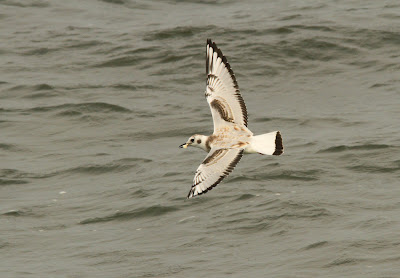 Above is a juvenile, below an adult from a few days ago. 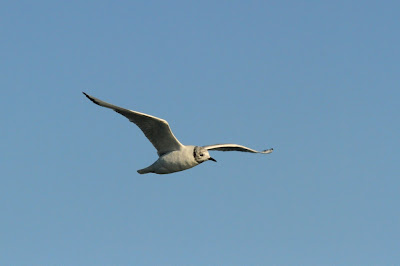 Light south winds made it a perfect day to get out on a smooth lake on the boat.  While we had vague hopes for Long-tailed Jaeger or Red-necked Phalarope we had to make do with a few groups of juvenile Black Terns.  We've had them out there both times we've gotten out on the lake this time of year.  The blue sky background was harder to montage than I expected. 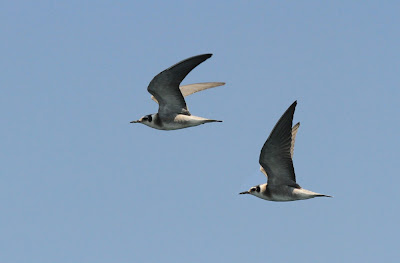 Next is two views of another bird which had richer brown scalloping to its juvie back feathers. 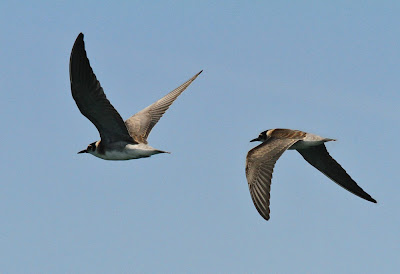 Black Tern (and Bonaparte's Gull) flocks often will do this erratic slip-slide downward.  The Bonapartes frequently follow it by landing on the surface though I've never seen a Black Tern land in the water.  I didn't notice what the stimulus for it was. 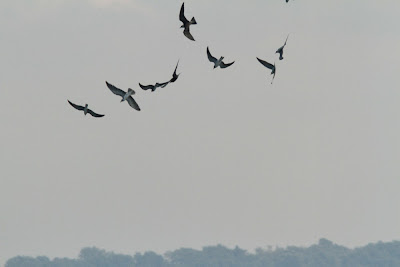 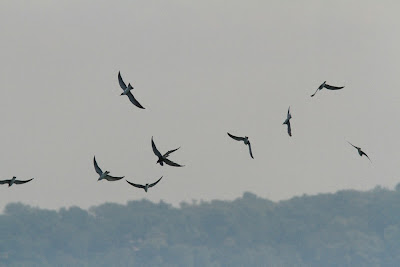 We saw a total of 24; this is the most I managed in one frame. 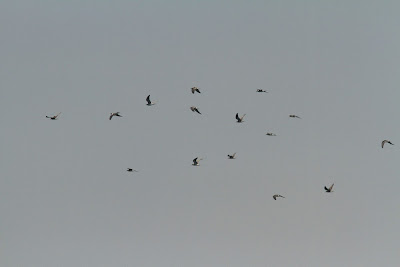 A couple weeks ago Rhoda and I found a whimbrel on a hike between Cherry Beach and Weko.  We've tried a couple more times recently, repeating that hike as well as the slightly longer New Buffalo to Cherry Beach stretch (ok "slightly" is in the eye of the beholder).  I've made a few Tiscornia to Klock or Rocky Gap walks too.  The results? Limited.

A few more juveniles of various species are showing up.  Today was my first juvie Forster's Tern and Bonaparte's Gulls of the year. 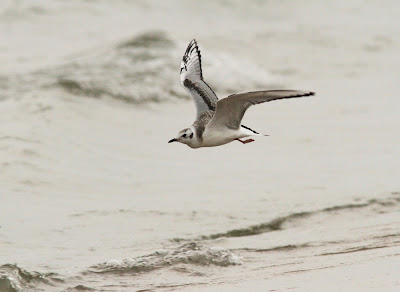 The Bonaparte's is from Klock this morning, the Semi Plover from Tiscornia I think Sunday 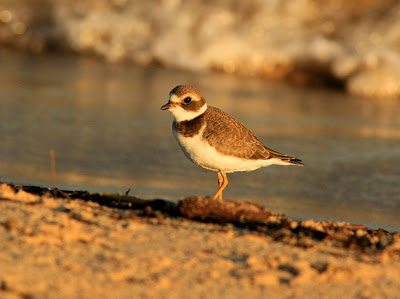 We covered about 7 miles in the south county this morning.  There was a Willet in the New Buff harbor, but after several more miles the best we could manage was a year-old Lesser Black-backed Gull. 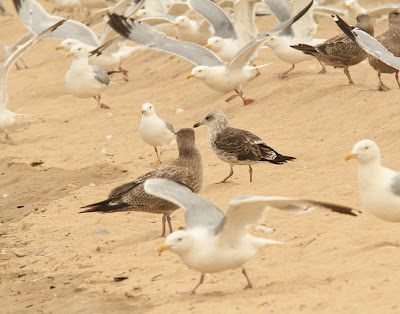 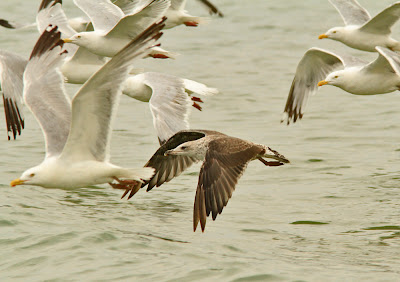 It's adding the black mantle it will carry into 2nd winter plumage and starting to get some darker primaries and primary coverts.

This evening a last check of the Tiscornia to Klock stretch revealed a Greater Yellowlegs in the gull flock.  I don't recall ever seeing a yellowlegs on the beach before though they do fly by now and then in varying numbers. 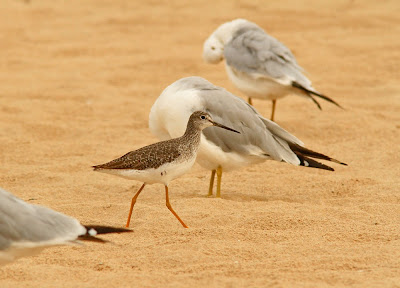 One of the juvie Herring Gulls decided it looked weird too since it made a pass at it flushing it right past me. 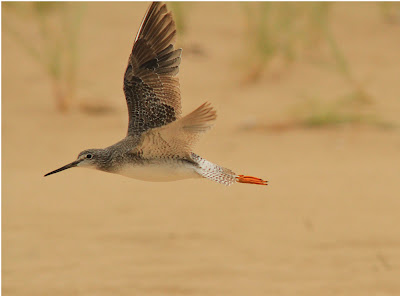 It's in wing moult too.  Sibley notes Greater moults in migration whereas Lessers moult afterward.
Posted by Matt at 7:00 PM No comments:

With the breeding season winding down but migration not going in earnest yet I've been carrying a net when I've been inland.  Tim and I waded out into Brown recently.  It was rank sulfuracous muck that I sat down in once.  I think this Marsh Wren was rooting for the tar pit. 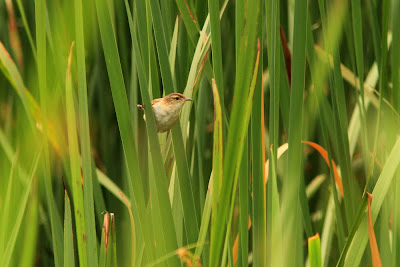 We caught a few odes, Common Green Darner, Slender Spreadwing, and White-faced Meadowhawk.  The Meadowhawk was a lifer for me, though it's the best represented meadowhawk in the specimen record for Berrien Co.  He got released. 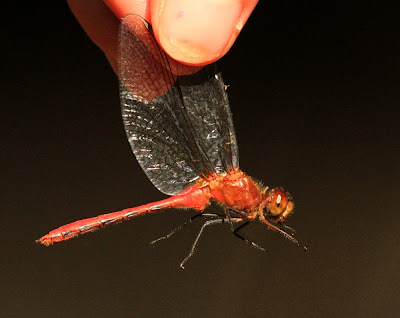 Also released was this Wandering Glider I snagged at Sarett Prairie.  Last year I made about 4 trips and spent a decent amount of time at the Harbor Shores puddle where there were a lot of gliders before I finally snagged one.  This is the first one I've seen this year and was caught on the first swing. 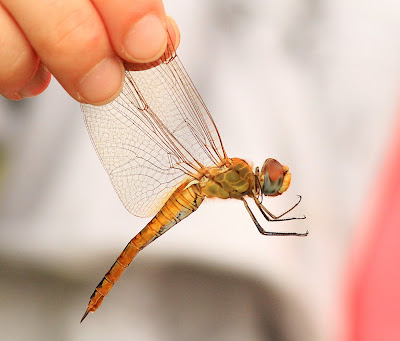 The kids were excited to hold this one, much larger than the meadowhawk.  Check out the broad trailing edge of the rearwing allowing it its namesake flight.  Hazel netted a Tawny-edged Skipper butterfly as well that we released after identifying.

Finally a mockingbird that popped up by the airport that Tim had mentioned has been around.  I didn't notice until I edited the images into a montage this evening that it was carrying food.  Perhaps breeding season isn't quite done after all. 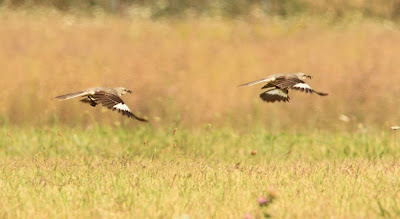 Willets aren't quite common enough long enough to get their own season (i.e. Merganser, or Ambiguous Grebe) but they're pretty regular along the beach presently.

This adult was on Klock this morning. 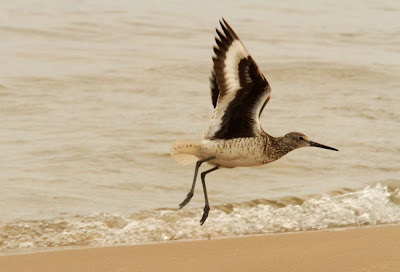 It wasn't super-excited about an approaching poodle and flushed right in front of me. I went back to the beach front with the kids in the afternoon, there was a distant Black-bellied Plover instead.  Like Hudsonian Godwit, they're most impressive with underwings flashing.

There was a group of about nine earlier this week at Tiscornia. 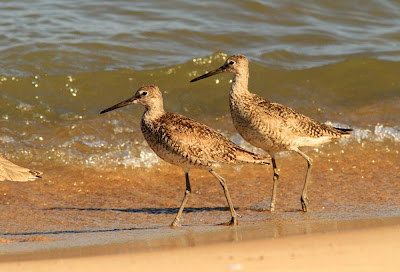 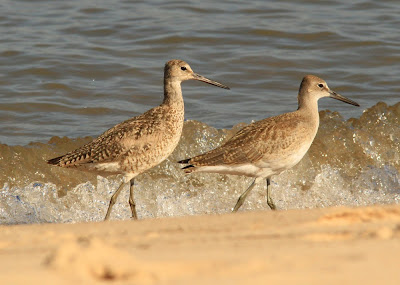 Juvenile shorebirds can be quite confiding, one of them walked toward me feeding unconcernedly before returning to the group. 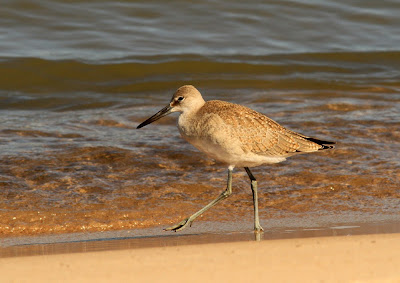