I missed a Long-tailed Jaeger by 10 or 20 minutes this morning at Tiscornia, but I'd hate to use up all my luck a week before the aftermath of a hurricane gets here.
Depending on this young turnstone's flight path s/he may need that bit of that luck as well.﻿ 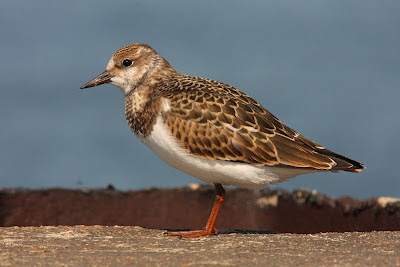 There were 2 juveniles working the pier today for the midges.  I took one photo of a midge's last millisecond just before it disappeared down the turnstone's bill, but it was kind of blurry.

Sometimes they needed a few balance checks while walking on the 3/8 inch balance beam of eroded steel that probably cost them a few tenths on the judges' scorecards. 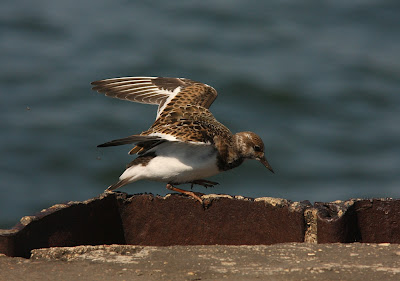 Their wingstripe is somewhat intermediate between a Sanderling's and a Baird's, not that I would know anything about that.

After a while the noon pier walkers pushed them right past my chair, inside the 1.5 meter focal distance 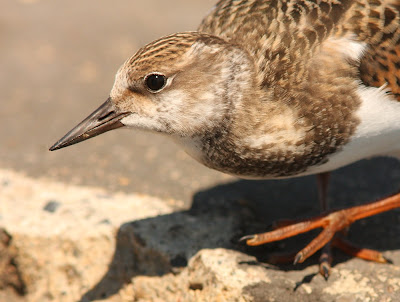 They're not quite as bright as the adult turnstones a week or so ago. 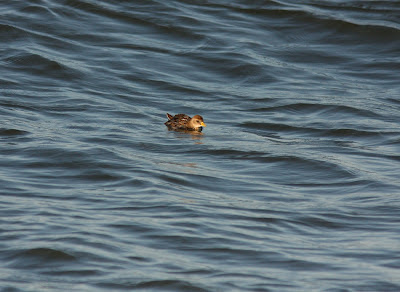 and one of ultimately 3 avocets that moved between the beaches 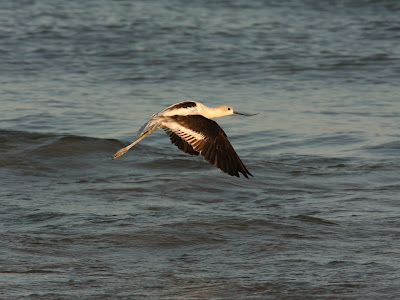 Peeps continue to trickle through along the beach.  Baird's Sandpipers have arrived on schedule (though last year I saw only one the entire fall).  I've seen Baird's about a third of the time on about 30 visits to Tiscornia in the 2nd half of August over the years. 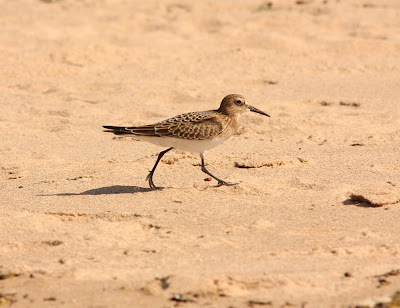 While buffy juvenile Semipalmated's do exist, they don't approach the overall buffiness of the entire head and breast of a fresh juvenile Baird's.  The scaliness and long primary projection also help the ID.
Here's another semi for comparison: 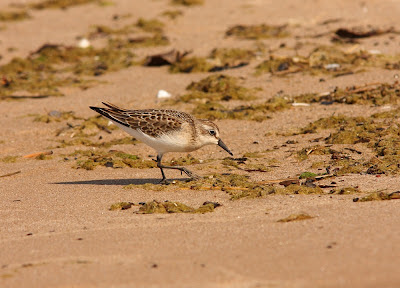 It has a shorter bill, primaries that stop at the end of the tail and less overall scaliness.

There was an adult Semi, I think the first one I've seen recently. 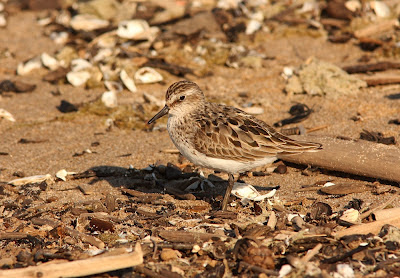 It's still in mostly worn breeding plumage with old wing coverts and a lot of worn scapulars, though there're a few gray winter scapulars starting to fill in.

An adult Semi Plover was in similar condition, 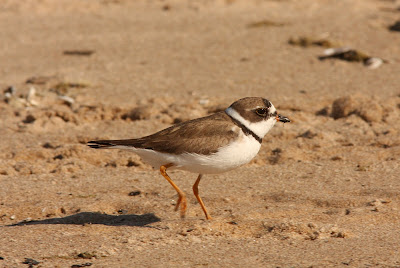 a lot of worn wing coverts, but brighter legs and bill base than the fresh juvenile... 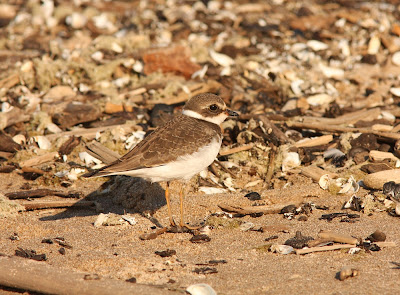 I couldn't find any shorebirds on the beach this morning.  I walked out on the pier to look at the cloud of swallows foraging in the lee of the lighthouse and discovered the reason why.  A large midge hatch covered the lighthouse with mosquito like bugs that the shorebirds were feeding on.  There were about 10 Semipalmated Sandpipers, probably as many as I've ever had at Tiscornia. 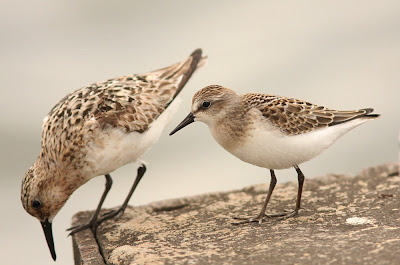 The above Semi was a pretty average looking one, but they're pretty variable.  Some of them are quite buffy in fresh juvenile plumage. 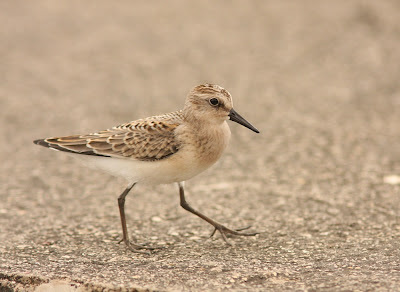 The next one (also quite buffy) has a remarkably dinky bill for a semi. 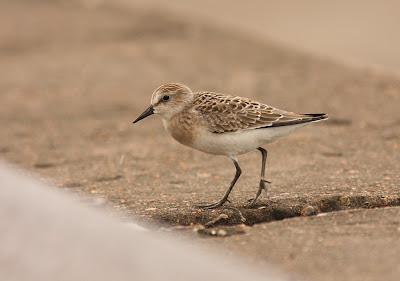 I think its bill is shorter than this Least's:﻿ 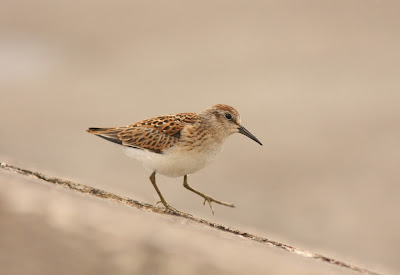 Finally a larger billed individual that in sunlight doesn't have any buffy tones.  It's bill is in that Semi group that starts to approach a Western's in length (but lacks the droop).  With its feathers sleeked tight in the heat it gives a longer legged look which also could make a person think Western.  Note the evenly scaled scapulars that lack much rufous in the upper ones or black anchor marks in the lower ones. 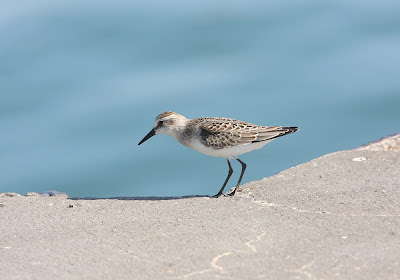 There were also my first juvenile Bonaparte's Gulls, Forster's Terns, and my first adult Common Tern flock of the fall.

Here's what the birds were feeding on.  Note the cutoff at the base of the lighthouse at about the max of a Sanderling's reach: 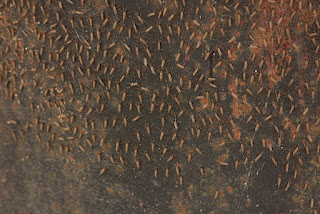 I had 7 species of shorebird at Tiscornia earlier today.  It usually takes a pretty big front to produce diversity of numbers (I think our max was double digits in the aftermath of the record breaking low in October of 2010), and a big storm did come through 36 hours ago.  Unfortunately yesterday was a Sunday bringing crowds of people to the beach and at least 2 swimmers were fatally swept away in what reportedly were 6-8 foot waves.  Today the lake was calm and birds had accumulated on the rip-rap that had washed in.  They felt like a cosmic 30 pieces of silver.

Unlike the juvenile Buff-breasted Sandpiper from last fall, this adult was not as confiding. 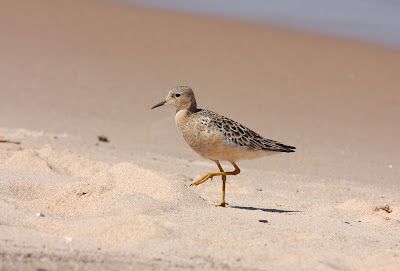 You can tell by the replaced scapulars and the worn wing coverts it's an adult. 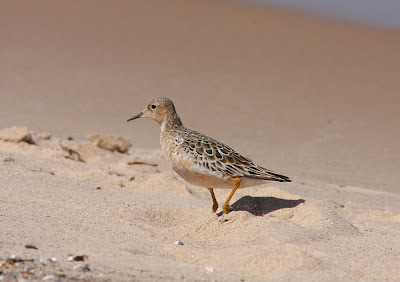 It took me several tries to guess which direction it was going to work its way towards for it to get even reasonably close.

No such difficulties with the birds foraging in the scum lines, here a juvie Semi Sandpiper 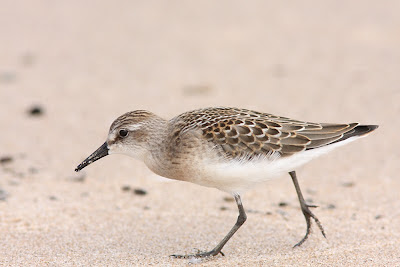 There were 2 Turnstones mixed in with the Sanderlings as well 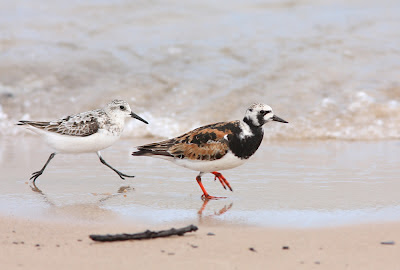 One of them (the lead out of focus bird) was missing much of a foot though it didn't slow it down very much. 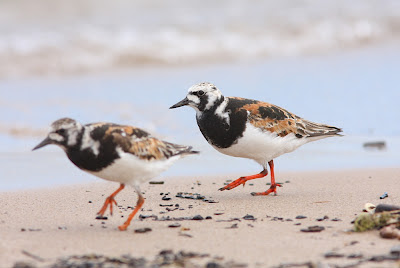 True to its name, the turnstone picked, probed, and rotated one of the shell clumps: 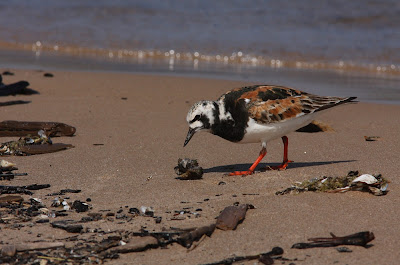 A juvie Least Sandpiper was on the pier, this was probably the best shot I've had of a Least in nice fresh plumage 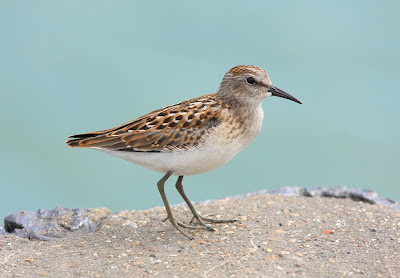 At close range it has a bit of a split supercilium.   All it has to do is wander 100 miles west, get some mud on its legs, and let stint psychosis explode the Illinois forums.

Finally a bird from last week, one of two Piping Plovers that didn't really fit into a post. 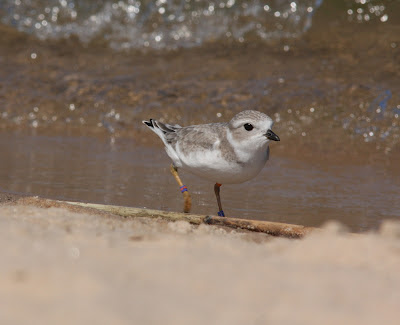