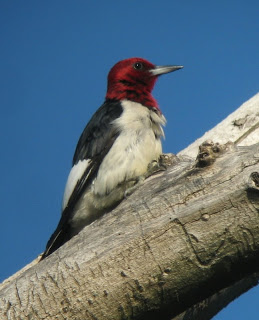 Well, June has been a pretty rough month on the bike. I did try for the pelican about a week and a half ago, biking out to Tiscornia only to find the winds still wrong. I went up to Jean Kloch to photograph red-headeds with some success, definitely my best images of the species. However, when we drove back in the afternoon to let the kids play on the swingset and stuff, what's on the beach but a willet. Grrrr.

Two nights ago I biked over to Grand Mere SP, starting at Lincoln Twp Beach. A chat was singing prominently, clearly doing themes and variations on some of the local birds, some robin-like tup-tup-tup sequences, some wood thrush intro notes, and most annoyingly a Virginia Rail sequence. I still don't have Virginia Rail and I didn't get least bittern there either. I did get a ton of mosquito bites while waiting and pacing along the edge of the marsh.

I moved on to the main entrance and biked down one of the trails into the sandy blow-out and started whistling whip-poor-will. I startled some marsh wrens into song (another species like chat, that is MUCH easier to find in Berrien than in Washtenaw), but no sign of a whip. From there I had to decide whether to continue on to Warren Dunes to go for the whip-poor-will there or to turn back. I wasn't sure that I would get to Warren Dunes before first light, but I figured I'd have a shot at nighthawks over Stevensville or the Rambo Rd ponds even if I was a little late so continued south. I did indeed arrive just as it was starting to lighten and the first wood thrushes, pewees, and tanagers were firing up. I got no rise out of the whip-poor-will there (though the mosquitoes again appreciated my efforts). Nighthawks no-showed as well. A few dickcissels on the way back in various places included my first for Lake Twp, but weren't really worth the 35 mile ride.

So, for the month I think I've added 2 species to the Bigby list, yellow-billed cuckoo in the back yard and dickcissel half a mile from my house. The other 70 miles were for naught. Ah well. I've got other spots for most of the birds, but it'd be nice to pick up some momentum here soon.

Dedicated to my little girls... 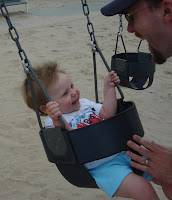 Well, maybe tomorrow the brown pelican in Lake Michigan will hook back south on the north winds predicted for tomorrow but today is all about my girls.

Anyway, today was Father's day, and my Wooga Bear (Hazel)'s 2nd birthday. Hannah (whose 1st birthday is fast approaching) enjoyed all the hullaballoo as well.
Also included is a picture from Hazel's first birthday party last year of a red admiral perched on one of her cupcakes. Last year there were swams of red admirals about, this year I haven't seen one. Not sure if that's just weather related or population cycling or what. 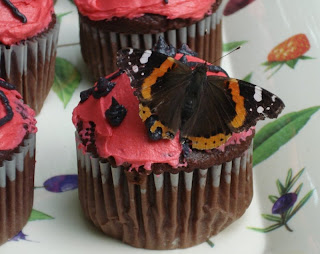 Triumph of the the Wing(nut)s

Well, maybe triumph is an exaggeration but the Wings did just win the Stanley Cup (ok a little background to the title, back in my Washtenaw days the local rag did a feature on Roger Wykes, one of the local birders in Ann Arbor who would typically rack up more species on an annual basis than anyone else, and called him a "Wingnut" in the headline. Someone then gave him a "trophy" at the end of the year with a wingnut on the top of it, and ever since the Wingnut award has been given to the Washtenaw county birder with the highest annual total... ). Anyway, led a trip for Washtenaw Audubon hoping to feature some of the local southern specialties that are much more difficult in Washtenaw than in Berrien. Ideally this trip would have been run at least a week earlier, but that was my anniversery and you have to draw the line somewhere right?


We started out in the morning down at Forest Lawn for the yellow-throated warblers. Since I expected them to be hard I figured it'd be best to start there with the coolest part of the morning to give us our b 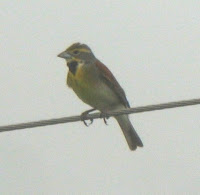 est shot. It nearly back-fired when our first pass down the road produced nothing; we headed back towards the cars when I heard one which we got a few unsatisfying backlit views of. We again headed back to the cars when the bird started singing again. This time it was more cooperative and nearly everyone had at least a brief view of it through the scope as well as binocular views. After watching an acadian flycatcher at really close range through the scope we headed north into areas traditionally good for dickcissels and I picked one up pretty quickly. This bird was very cooperative, perching up on the wire and singing away, a lifer for several members of the group.

We headed next to Warren Dunes SP where the prairie warblers were surprisingly un-cooperative. My general experience with prairies is that they tend to sing from a perch and, while difficult to find initially, will tend to sit and sing. This was not the case today, we heard the birds well, but only a few of us had a fleeting view of one. Interestingly there was a bird at the periphery of the blow-out that sang ta-ta-ta-ta-ta-ta-weet-eo, starting out with the typical prairie song, though maybe a little thinner, and then ending with a hooded warbler turn.


After stopping for lunch we headed up towards Sarett, starting at Brown where we had brief views of a prothonotary which I hit a couple times with a tape, getting a view of 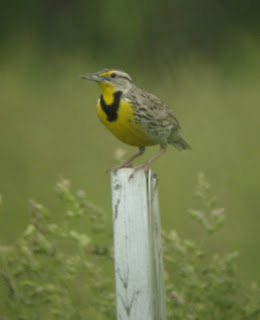 the bird as it flew past and then sang from a thicket. The Sarett Prairie had a good numbers of bluebirds perched up, a willow flycatcher for the scope, and an orchard oriole at the entrance, but the ammodramid sparrows were no-shows (though both Henslows and grasshopper can be found in Washtenaw). We ended at Anna Lane where after some waiting, we were rewarded with a perched-up view of the western meadowlark there, another lifer for a decent proportion of the group. This was my first chance to get a good study of the bird visually; the first time I saw the bird at the end of April I could see some white on the malar (more of an eastern mark), the second time I saw the bird a few weeks ago it seemed quite sandy in appearance. This time a decent view revealed that while there is an edge of the malar that is pale, most of the feather tract is yellow, which is indeed what Sibley and Peterson illustrate.
Posted by Matt at 2:11 PM No comments: