I've managed to go the entire month so far and find no year birds at Tiscornia, quite possibly an unprecedented feat.  Last year during September (despite having an appendectomy) I saw 10 birds that would have been year birds this year.  Ah well.

Passerines will drop out onto the pier at times giving much closer looks than they typically do in the woods.  I've seen Grasshopper sparrow, sedge and marsh wren, several warblers and other sparrows, and who knows what all else that was un-ID'd.  This BT Green is un-cropped, just about my only photo in the sequence that doesn't chop off the tail. 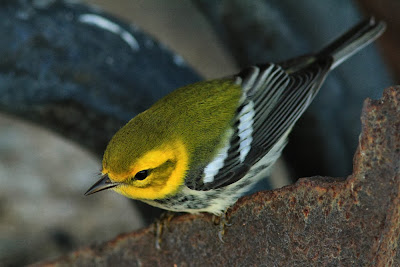 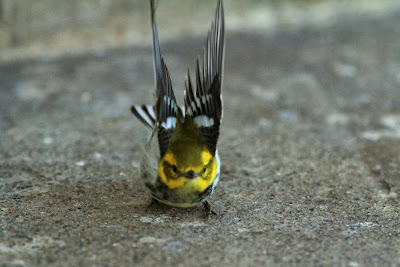 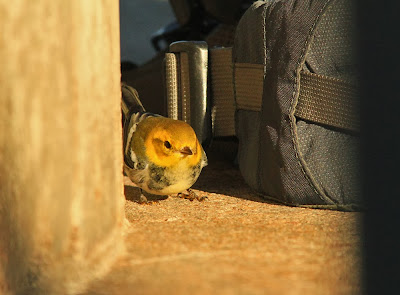 Tim noticed a pipit a couple feet away earlier in the morning, almost certainly my best pic of one even if it is backlit. 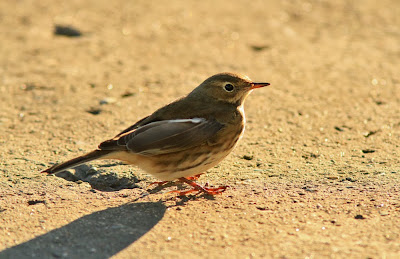 The friendly neighborhood Merlin was attentive to the buffet line too.  It (or maybe a couple) have been hanging out for most of the week. 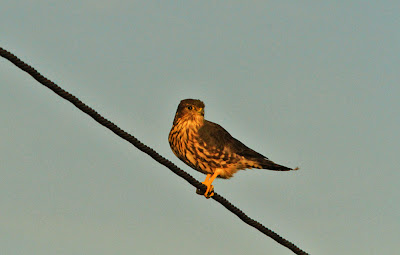 The wire got in the way of the take-off sequence.  It's moulted in fresh underwing coverts in an irregular line. 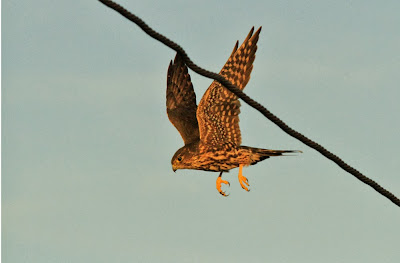 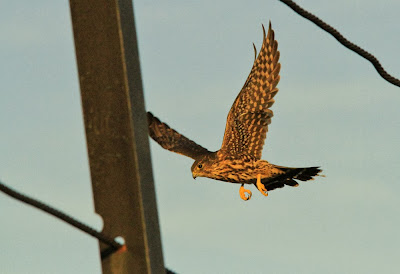 I saw it take a pass at a sparrow class thing that evaded it easily before the sun rose above the dune.
Posted by Matt at 10:49 AM No comments:

not the Holland jaeger

Here's another bird that pre-dated the blog, a dark dull young Parasitic that was originally called a Pomarine from 2007.

When jaegers are perched their bills can look pretty small 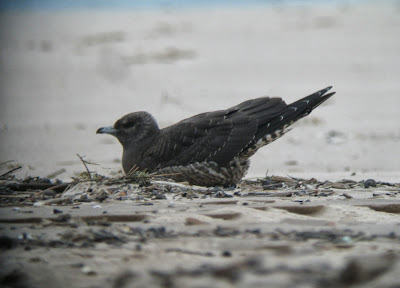 Parasitic per the books is the most likely to have pale outer chevrons to the folded primaries.  The undertail coverts are a lot warmer colored than the rest of the bird.  The shape of the tail projections are the key to the ID. 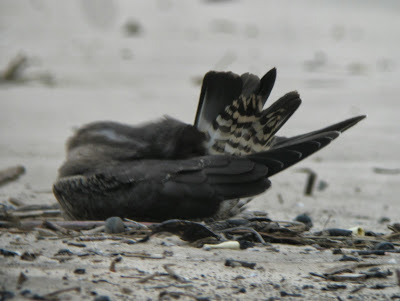 Here's a sense of the underwing.  This bird has more of a hooded effect than I remembered. 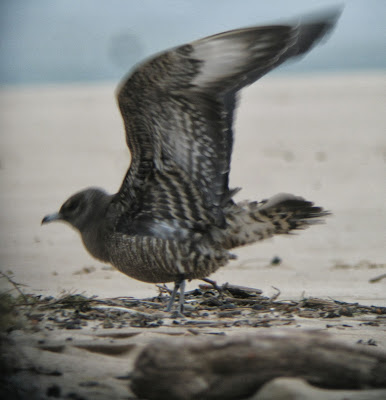 I've been hurting for shorebirds this year.  Out of the godwits, avocet, buff-breasted, the 2 reasonably possible phalaropes, red knot, stilt sand, and less common plovers I've seen about half of what I've averaged (frequently with much less effort) in the past.  I still need White-rumped and Purple Sandpiper too but their windows haven't peaked (or even started wrt Purple) yet.

This juvie Baird's was on the beach earlier this week, it's the closest I've come to seeing a Buff-breasted Sandpiper this year.  In the past I've usually either had Buff-breasted on calm sunny days in August or brisk-strong N wind days in September.  The Baird's appeared on a brisk N wind. 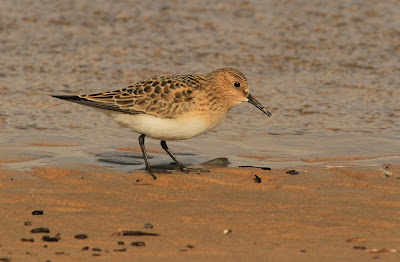 I may have had a shot at 280 this year with some rarity luck if I'd had an average number of shorebirds, I have virtually no chance at that barring some crazy luck with rarities at this point.

Here it found some micro something or another to eat. 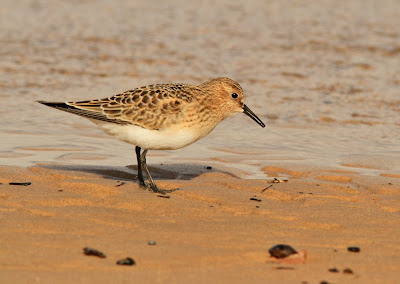 Note the pale scalloping to the scapulars marking this bird as a juvie.  The long wings that extend past the tail eliminate all other peeps except the fairly dissimilar White-rumped.  The bird has a more cleanly cut off buffy breast than does Semi-palmated in addition to a slightly heavier and more drooped bill. 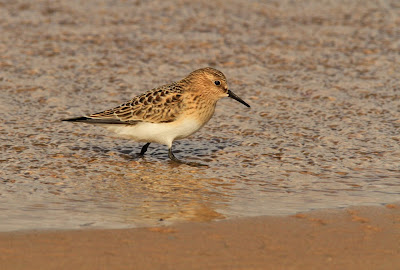 I don't see Baird's in the water very often, this day there was a large puddle on the upper stretch of the beach where it was foraging on a fairly gusty day.

I had hoped to do a pelagic today but the storm and rain put a pretty emphatic crimp on those plans.
Posted by Matt at 11:06 AM No comments:

I had fairly high hopes for today, not least of which was that I could actually go birding.  The first North winds in some time were considerably less than predicted and though I ended with exactly zero yearbirds, the most interactive Parasitic Jaeger we've had yet more than made up for it.  Most of the jaegers that go by are a couple or several hundred yards out.  Sometimes (like last post) one will cut by maybe a hundred yards away.  This one did considerably better, attacking the gulls at the end of the pier.  We were impressed. 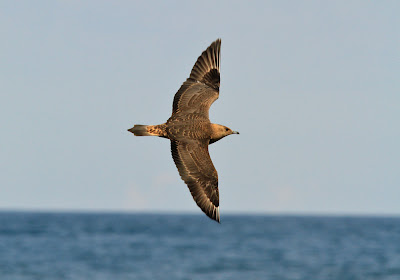 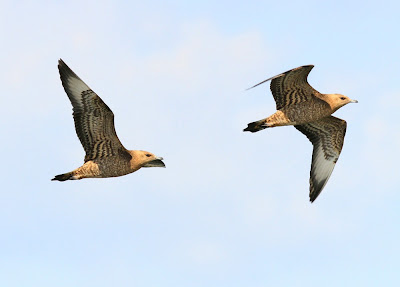 The bird went into full attack mode a few times, mainly targeting the Ring-billeds though it did tail-chase a Bonaparte's well out as well.  The jaeger would seem to try to match the wingbeats of the target, perhaps gaining additional aerodynamic advantage.  The Ring-billed is craning its neck down to look at the jaeger.  I thought it was interesting they've both turned their heads the same way as they lean into their turn. 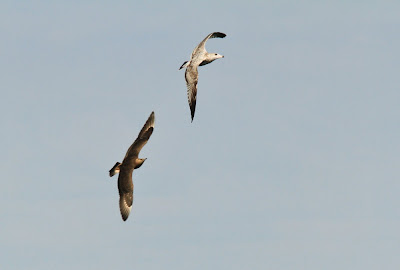 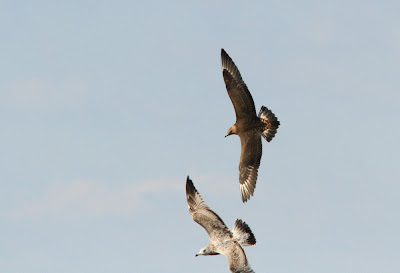 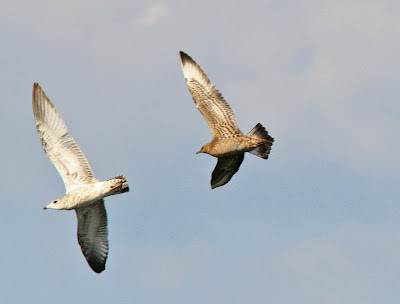 Proof that turnabout is fair play, a young Herring Gull seemed to take umbrage at the jaeger harassing its Ring-billeds.  Only it gets to harass the Ringbills. 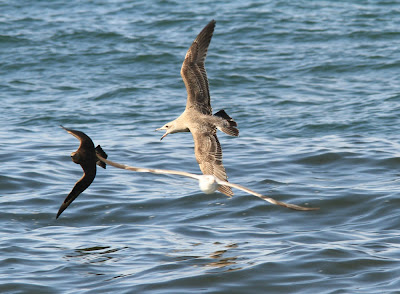 Finally, one less display of how low the bird was, 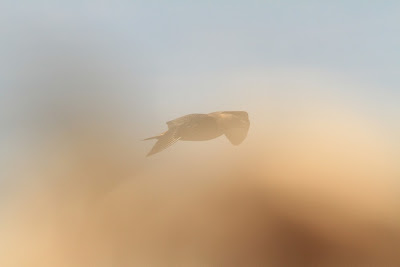 The days I've been out this week have been s-l-o-w.  We were well into the second round of football talk when this Parasitic materialized in front of us.  It's the closest I've had one at the pier in some time (though we had a fairly close one with the boat a few years ago). 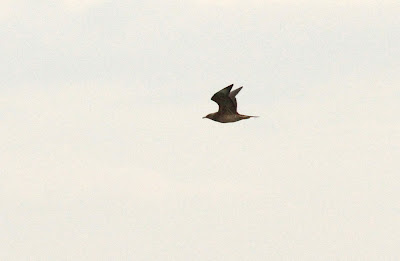 I'd just adjusted the settings on my camera (for gulls or terns) and the much darker jaeger was under-exposed.  I had to do more post-processing with the exposure than I'd like. 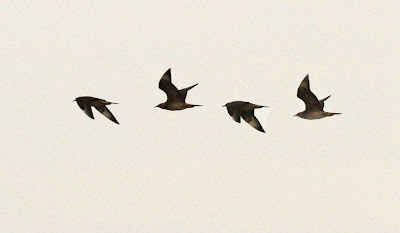 It's a pretty typical looking young Parasitic with some warm tones (though they vary a decent amount in terms of light-dark spectrum and degree of warm tones), fairly heavy white flash to the underside of the wing (and an average flash to the upperside).  The bird has typical proportions with medium length hand, somewhat belly heavy and a typical length tail.  Long-tailed's have a longer hand giving  longer thinner wings, and a somewhat longer tail.  While you'll certainly see warmer colored Parasitics (and the underexposure doesn't help), it is certainly warm enough to eliminate Long-tailed just on that point alone.  Some young Parasitics will have an even stronger upperwing flash, per the Olsen and Larsson book a strong upperwing flash when present is virtually diagnostic of Parasitic.  It's too early to start really thinking about Pomarine; they're shorter-handed and lack tail extensions.

Here's a distant shot after I'd adjusted the settings on the camera.  It gives a little better sense of the warmish tones.  You can just see the pointed central tail feathers protruding an inch or so past the end of the tail. 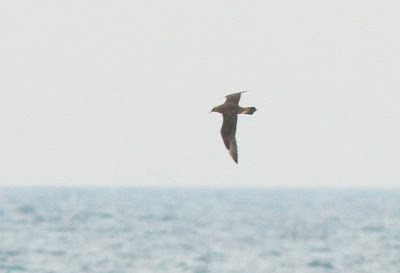 Given that I've been so hard up for yearbirds of late I figured I'd take the blog down memory lane.  In 2006 when we moved here Chris Barrigar and Tim had been seeing  Little Gulls at Tiscornia the last week of August.  I had a lot of holes on my Michigan list in the gull section since they're just so hard to chase.  I'd made a couple trips to the beach hoping for the Little Gull (and missed one by about 10 minutes), but the luck turned around Sept 1 when a cracking juvie landed on the beach behind me. 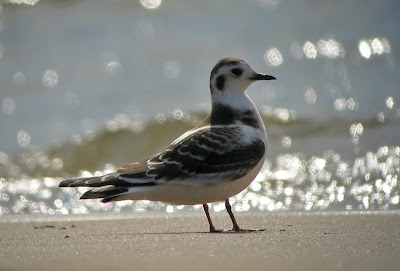 It was hanging out with a flock of Common Terns that would fly in and fly out, back and forth from the river water to the beach (kind of like what the terns were doing earlier this week too). 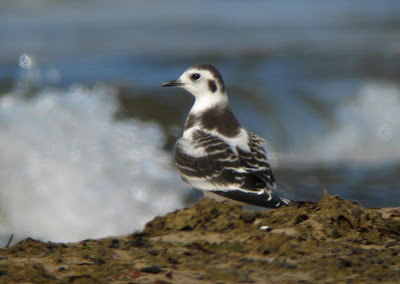 This was back in the days of digi-scoping and I took what (for then) was a lot of pics, probably 30-40. 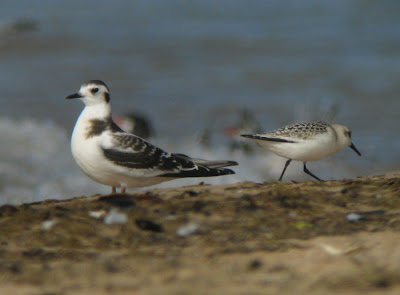 You just don't see them in this crisp of plumage very often, if a bird cooperated like this now I'd come home with at least an order of magnitude more pics.  Flight shots were tough back in the digi-scoping days. 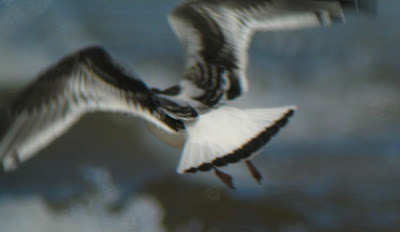 Last year my only Little Gull was a year ago tomorrow, I'll keep my fingers crossed.