I got home from work and Hazel (the nearly 2 year old) was running around in the yard with Ginger. She ran up to me and soon was pointing at the bike saying "ride? ride? ride?" I said "OK," and we were off, I decided to check a little flooded field that will soon become the rest of a subdivision that wasn't bad for shorebirds last fall. We rode over, I could tell there were shorebirds present and the first bird I put the binoculars on was the plainest Wilson's phalarope I've ever seen. Finally a decent bird for my Bigby year and a county lifer at that (leaving clay-colored sparrow and yellow-bellied flycatcher as my remaining most regularly occurring birds still needed for Berrien). At first I thought it had retained juvie plumage but it appeared to be just a very dull (probably first spring) male with only the faintest trace of color to the neck. I scanned back and forth and found the female a few feet away. She was in full breeding plumage in gorgeous light. They fed in typically frenetic madcap fashion, little shorebirds on speed, dashing about, picking back and forth at the water, thoroughly frustrating any chance of a decent photo. The female skidded once as she slid in the mud. They worked their way around the flooding, pausing once to add themselves to my c-list before continuing back around. 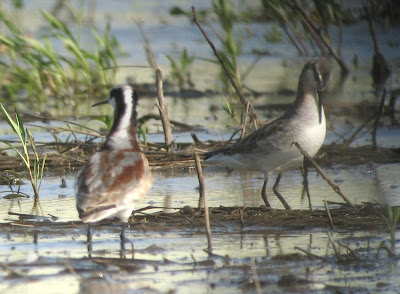 WARNING: to any faithful readers of this blog, the following post contains primarily bird-related content. I know that's probably shocking after all the flower posts, but hey, gotta get back on track sometime. 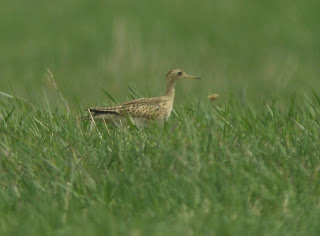 check out a few areas to the north (because you should NEVER go somewhere you've never been on a big day), starting in Allegan SGA on a warm day with heavy SE winds making it hard to listen for grassland birds. There was indeed a pair of upland sandpipers foraging in the short grass SE of the 118th and 59th street intersection along with a 3rd bird farther west on 118th. I couldn't, however, locate any true grassland sparrows (there was one vesper in the road), bob-white, or mockingbirds. There was one pine warbler on 46th as well.

the wind in the more northern parts. I'd never been there before and found the ambiance not unpleasant. There was definitely less of the "smell of victory" that the typical landfill has (though a landfill does abut the treatment plant so you can take the pepsi challenge for birding noses so to speak. It honestly smelled like the old microbiology lab in college by nowhere as intense. Anyway, I hadn't been there 15 minutes before I rolled up on a naked-eye eared grebe in full breeding plumage. Despite the fact it was more or less holding its position in the water, I couldn't get anything more than a record-quality pic with the rolling waves and strong backlit overcast. I continued on, eventually finding a second eared and about 7 horned grebes. The

second eared grebe had slightly shorter ear plumes than the original bird. In addition to a group of turkeys, a rough-legged hawk, and some cormorants, there was one goldeneye with a very Barrow's-shaped head, not at all with the triangular peak that the commons typically have. Rather, the bird's head peaked in the forehead and swept back from there (despite wind from its back). That being said, it seemed to be a female-type bird but with an all dark bill so I left it as an odd common or perhaps just a common with an odd posture. There were 3 more uplands in the grassy areas on the way out, one of which was calling. Hopefully tomorrow I can find an Upland actually in Berrien.

And finally, a nice example of squirrel corn from yesterday behind the house, a close relative to the more common Dutchman's breeches. 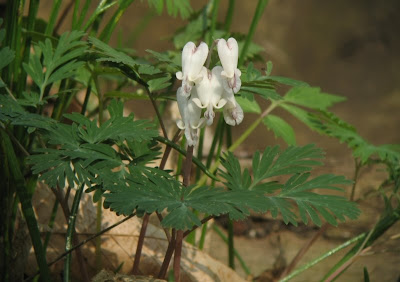 Snow Trilliums ... or not 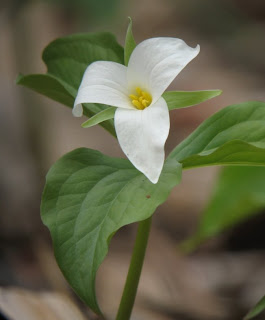 I bicycled down to Grand Mere State Park hoping for some good migrants (i.e. purple finch, Louisiana waterthrush, etc) but didn't have a lot of success. I heard or saw several year birds, savannah sparrow, field sparrow, white-throated sparrow, blue-gray gnatcatcher, rufous-sided towhee, but didn't find anything of listable interest. I ran into Jan at the North lake where we watched a faded WW scoter with a quite pale brown tail and she told me she'd heard a Louisiana earlier, but it had quieted by the time I arrived.

The highlight of the morning (actually more like midday) were some small trilliums that I was fairly excited over as I thought they were snow trilliums as they were short and small-flowered. I spent a fair amount of time trying to get a good picture of them in decent light. However, when I got back and pulled a book out I found that the leaves were shaped just like the usual large-flowered trillium and that these must have just been somewhat runty early ones. Oh well.

One of the common new arrivals made it 100 for the Bigby year. Last year I hit 100 on the last day of March. We'll see how things even out in May. Typically I hit 200 for a county in Michigan early in the peak migration somewhere between May 10 and May 15 or so. It's taken about 225 miles of biking to get this far. How many miles will it take to reach 200 this year? I hope it's before mile 1000.
Posted by Matt at 7:12 PM No comments:

Beauties and a beast 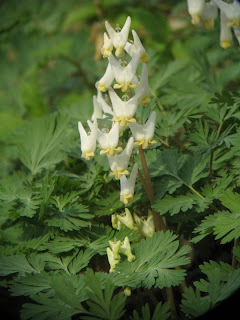 Took a walk down below the house again this morning. The wildflowers had progressed considerably since last time. Early spring is definitely the best time for them around here. The bloodroot have been out for a few days but today the Dutchman's Breetches were out in full force.

Spring beauty, the beginnings of springwort and cut-leaved toothwort, as well as a couple trout lilies and some really gorgeous hepatica rounded out most of the flowers. The hepatica varied from snow white to lavender to bluish.

As for the birds, they weren't as cooperative, ruby-crowned's had more or less replaced the golden-crowned kinglets and were singing profusely. A few hermit thrushes, sapsuckers, and increased numbers of yellow-rumped warblers were about, but none perched very well. Chipping sparrows were newly arrived. The only thing that did perch was this big-ol' turkey vulture which peered down at me from its roost before eventually spreading its wings, hesitating, then taking off. 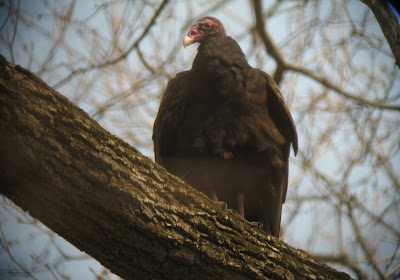 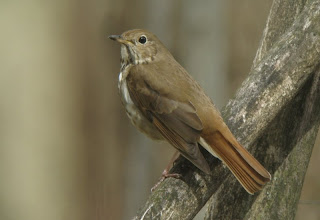 Walked down below the house this morning at last finding decent numbers of hermit thrushes tup-tupping about in the pines and edges of the woods. They certainly seem to be more social than the other catharus thrushes. None were singing yet. I hunkered down at one point along the path where a neighbor had cut their portion of the woods causing the birds to bottle-neck as they foraged north. I slowly followed a group of 3 birds without getting very close when after a few minutes another bird flew up within feet of me then moved back on a clear branch for by far my best pics of them yet. 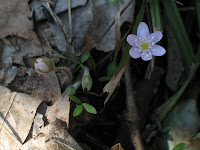 brown creepers with varying degrees of success. Remarkably the creepers were year birds for me, a marker that I havn't been getting out as much as I should have (also that I didn't get the suet feeder going this year either).

The other day took a decent picture of some hepatica which, along with the tiny harbinger-of-spring, were the only wildflowers up, but today bloodroot was open, along with some of the cut-leaved toothwort. The Dutchman's Breetches aren't far away.
Posted by Matt at 12:27 AM No comments:

Well, we've finally reached that happy time of year when the phone can ring and instead of being the boss seeing if you "want" to come in to work an extra shift, or being informed of the latest family time with the in-laws ;-), it can be news of a bird worth chasing. I had considered biking to Tiscornia this morning but was just too tired to go and see what might be there on Lake Michigan, BUT, when Andre called about midday saying he'd found a moorhen a block away from his house, (in essentially the same location as he'd found my county-lifer bittern last year) suddenly my legs felt much more willing. Moorhen is probably slightly less than annual in Berrien county and this one was just over 10 miles from home so I felt like I HAD to go. The route was just about straight south and with a nice north wind I made it in less than an hour. It didn't take long to scan the lake and spot the bird foraging with a coot on the first pass. The ride home was into a decent head wind and took me close to an hour and a half though I did stop for a few blackbird flocks to try to pull out a rusty.

Another sign that spring is finally here were butterflies yesterday, a morning cloak as well as several Eastern Commas, such as the one below (in the in-laws' defense, this was in their backyard). 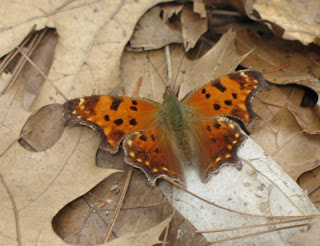