Walking for a whimbrel

As evidenced by my lack of blogging, I haven't gotten much birding in lately.  But, with my family off camping and me having an actual day off, I wasn't going to let the need for a winter coat in July dissuade me from the lakefront.  I started at Tiscornia where a rain shower quickly chased Rhoda and me.  We went south based on the radar and ended up walking from Cherry Beach to Weko, about 5.5 miles if I'm interpreting Google maps correctly.  It's about the peak time for Piping Plover and about the beginning and the end respectively for Avocet and Laughing Gull.

We had seen a pair of Turnstones fly by Tiscornia, it wouldn't surprise me if this was the same pair at the main beach at Warren Dunes. 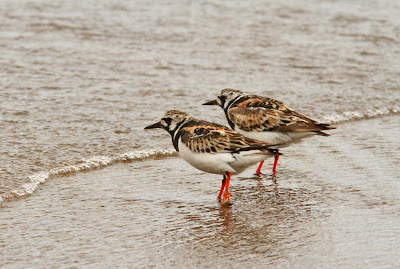 We saw one group of Sanderlings and the first mixed dabbler flock of the fall, though honestly fewer Sanderlings than I was expecting, this adult with just a few winter back feathers is from Tiscornia earlier in the week. 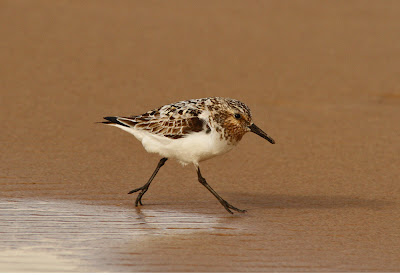 We were getting towards the end and I was starting to come to the conclusion that most of the shorebirds that hang out are probably in the same areas as the big beach areas that hold the gulls when this bird appeared in front of us.  With the naked eye I thought it would be a Willet. 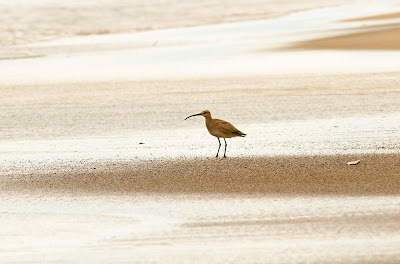 Nope, a Whimbrel!  I've had Whimbrel in the county about 2/3 of the years; this was a yearbird, my first in a few weeks and my first self-found one this month.  I think Rhoda may have digi-scoped better images than I managed.  It's a bird worth a flight montage though. 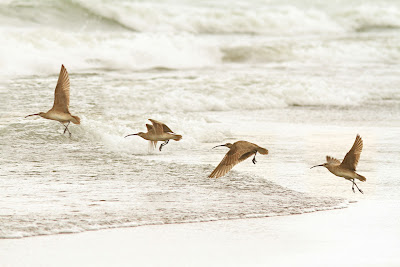 The lighting was pretty tricky with the water reflecting back all the light present in the overcast, I had to really push the exposure to keep the bird from being completely back-lit.  It's kind of an interesting monochrome effect though.
Posted by Matt at 4:45 PM No comments:

For many people, robins and RW blackbirds are the first signs of spring.  In Berrien large adult shorebirds mark the onset of fall (making me even more acutely aware that I still need chat, moorhen, and laughing gull for the year).  Tim found a Marbled Godwit on Jean Klock; I was able to get there about an hour later.  The bird was hanging out with Berrien's much more common large shorb, a willet. 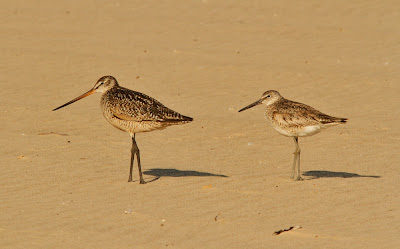 The Godwit is a lot less worn than the fairly raggedy looking Willet.  It still has a lot of breeding plumage barring in the breast however, meaning that it hasn't moulted the body feathers at least.  Per the orange Shorebird guide females average longer bills with more dark.  The birds were fairly content to rest loosely affiliated with the gull flock.  The godwit stretched once though. 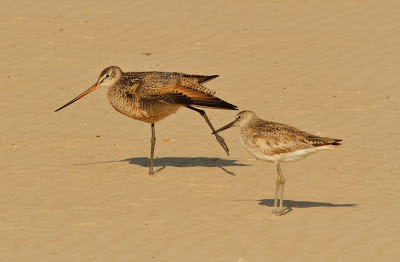 Bringing the high drama of this theatre to a close, the birds then switched places.  The composition of the pic benefits though. 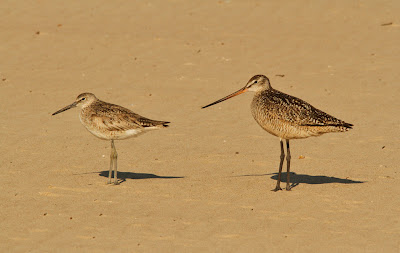 Marbled has been somewhat of a bugaboo for my annual listing attempts, this is only the 2nd one I've seen in Berrien since we moved here.

We got back yesterday from camping near Baldwin at Nichols Lake, in the western central LP.  The birds were about what one would expect.  I didn't see the Common Loons I've seen there before, but July 4th weekend boat traffic may have had something to do with that.  Work kept me from getting up there last year and I was curious to see what the red dragonflies I remembered from past years were.  I was mostly expecting meadowhawks; they turned out to be Calico Pennants, a species I don't see very often down here. 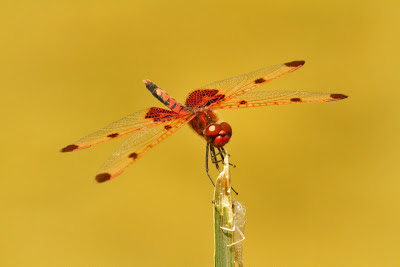 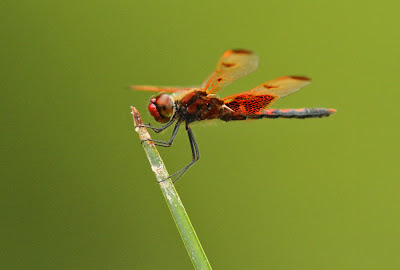 I ended up wading out and hunkering down in the water for those shots.

I pretty quickly noted a clubtail on the sand at the beach, the appropriately named Common Sanddragon. 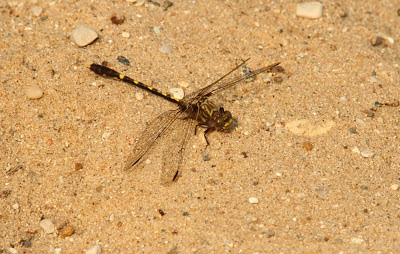 I tried to catch one to look at it closer, and unfortunately whacked it with the side of the net, destining it to be a specimen.  As it turns out it's a first county record (all hail the lack of effort at odes), so only the end of the world for it to be soaking in acetone.  ID points for this species seems to mainly be the pale tips protruding from the end of the abdomen.  This is one that's needed for Berrien as well, I'll have to think about sandbars by inland lakes that could be checked since they were common up there right now.

I think this is an Emerald Spreadwing damselfly.  You need really good hand lens to do these things justice and I didn't bother netting one to confirm the ID. 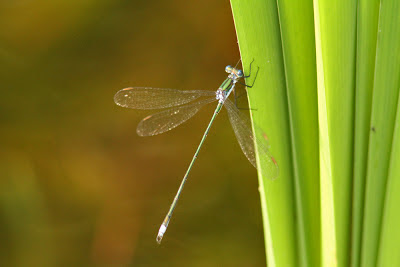 Here's a tandem pair, I really had to play with the settings to try to get a decent depth of field to make both reasonably in focus. 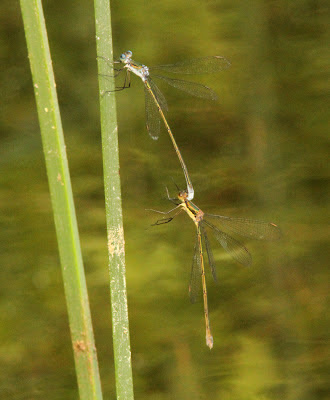 Finally a Variable Damselfly, a species I've seen but never gotten a decent pic of in Berrien. 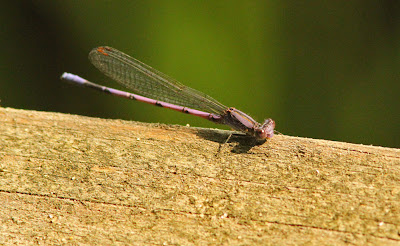