Who wants to go to Costa Rica?

I was a little late getting word about this winter's CR trip out so a lot of people already had made plans ... which means I have a couple spots left on an 8 person trip for Jan 25 - Feb 2.

So the question you have to ask yourself, would you like to see a quetzal? 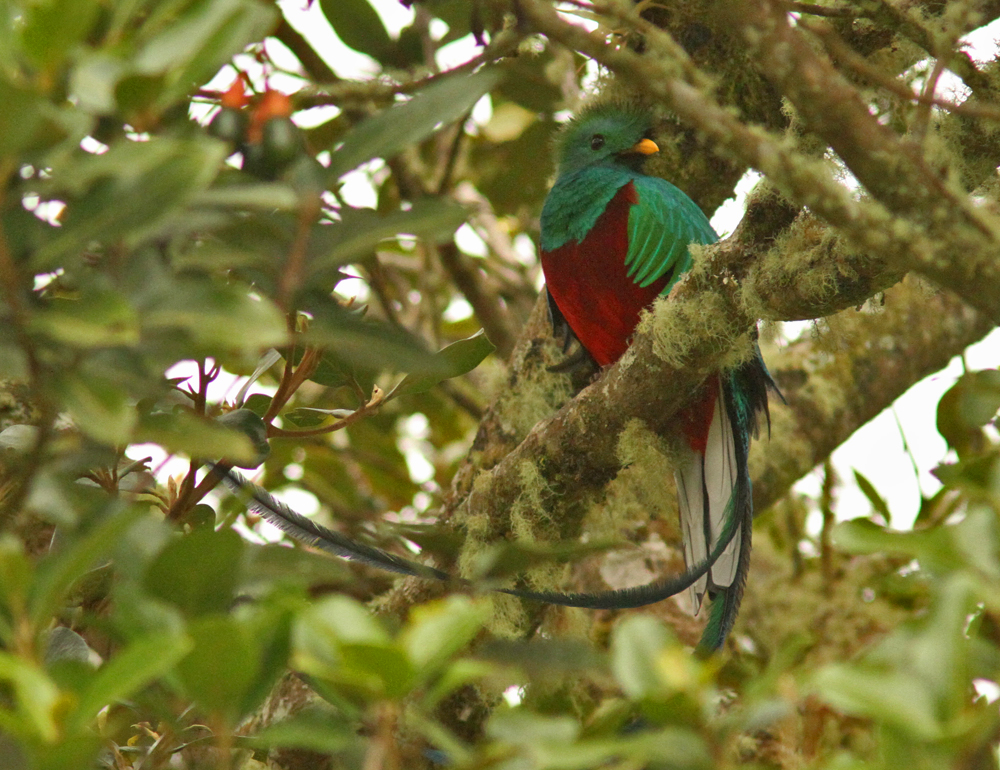 How about half a dozen species of highland hummingbird?

Along with a bunch of other birds endemic to the Chiriquí highlands only found in Eastern Costa Rica or Western Panama? 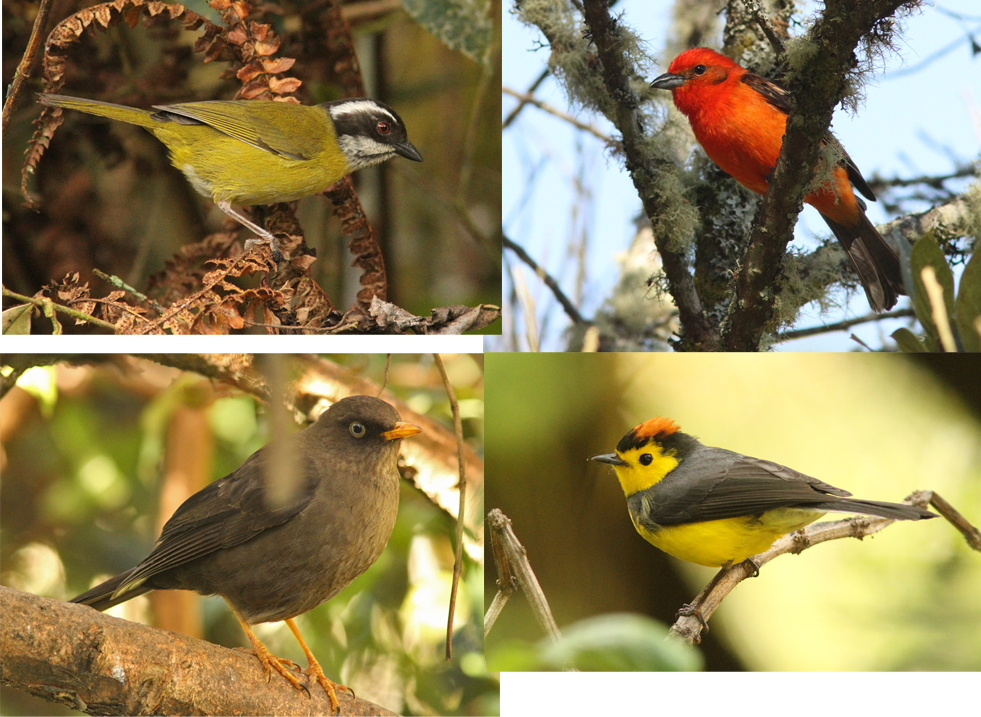 Would you like to see a bunch of mid-elevation tanagers in and around Tapanti National Park? 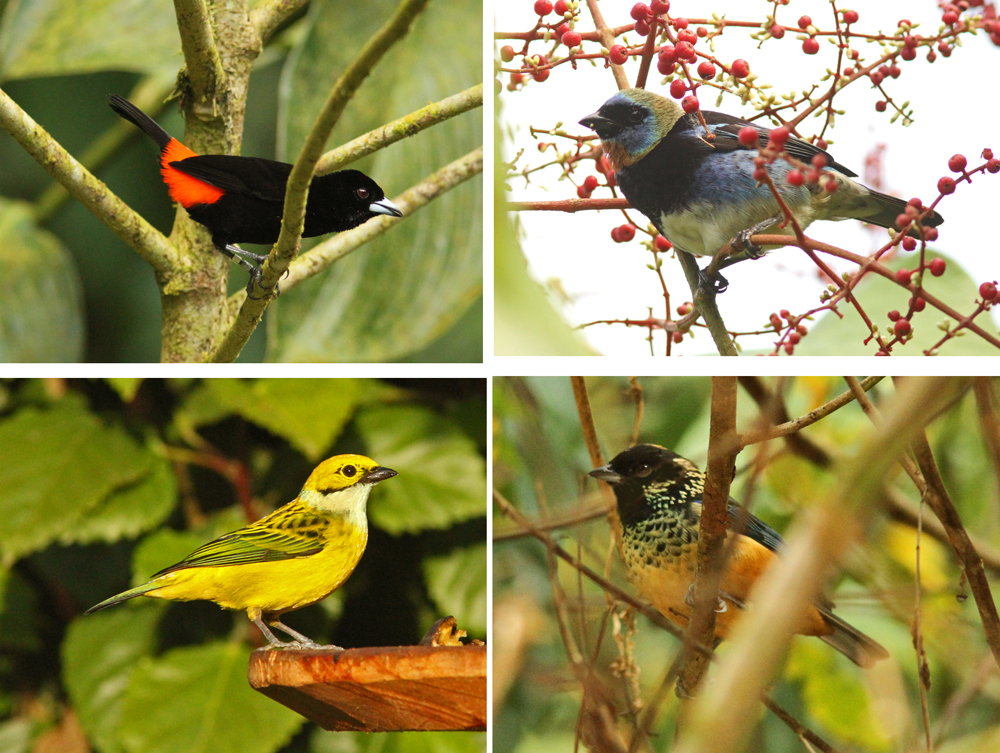 There's a lot more than tanagers though, for starters about another 10 hummingbirds ...﻿ 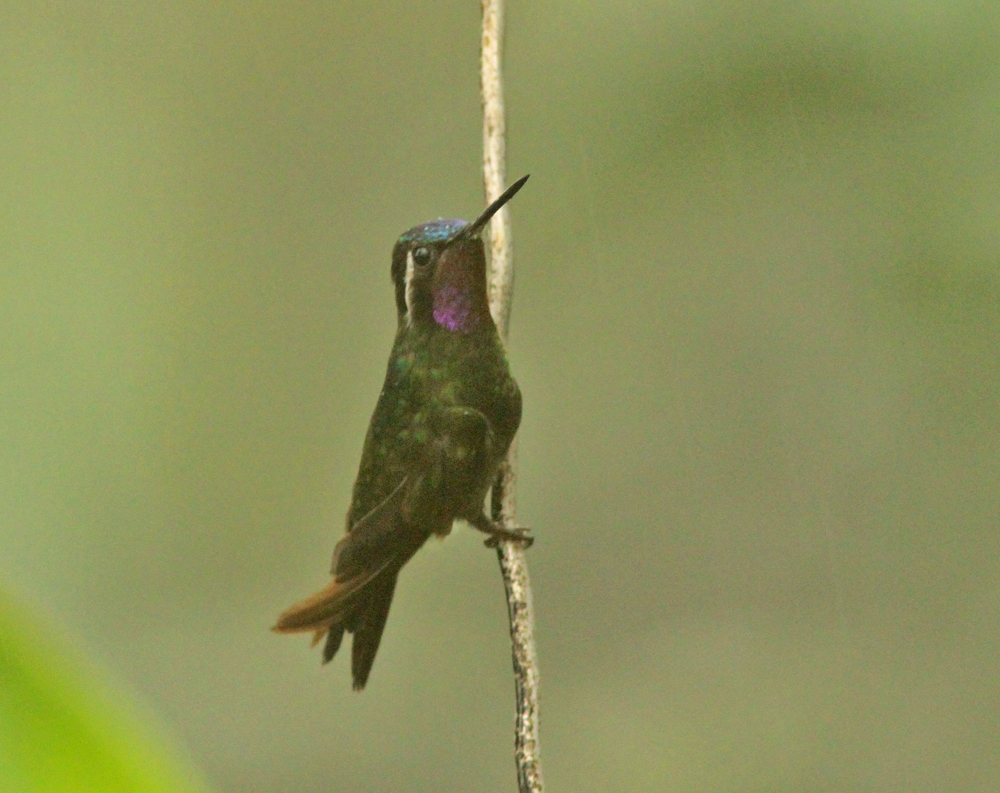 ... and any number of other fun birds. 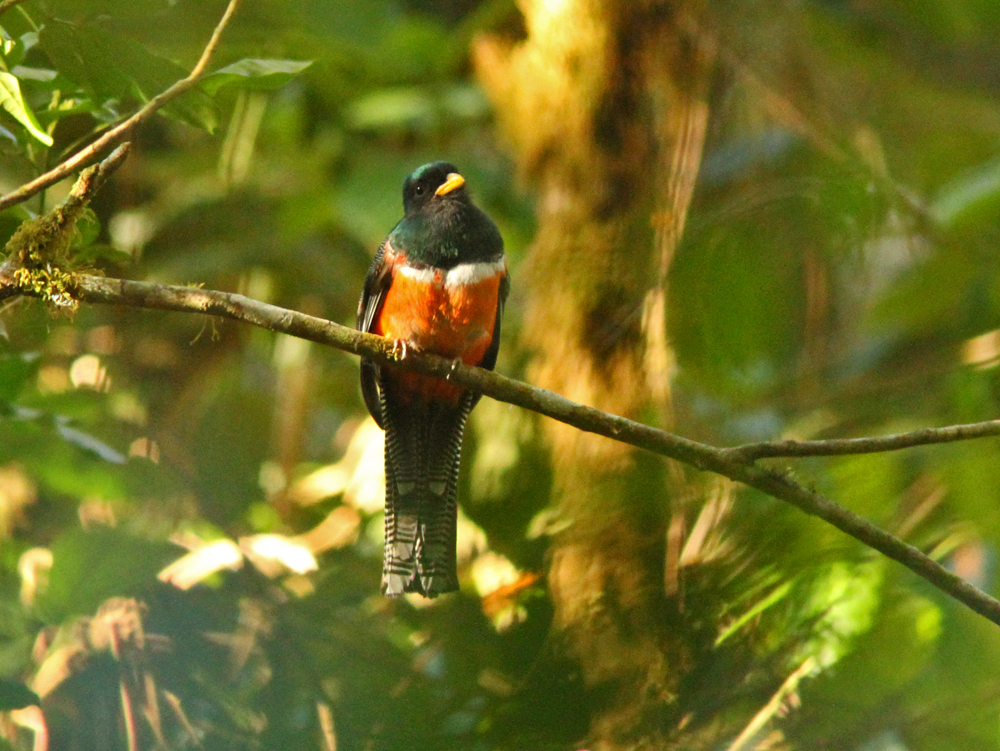 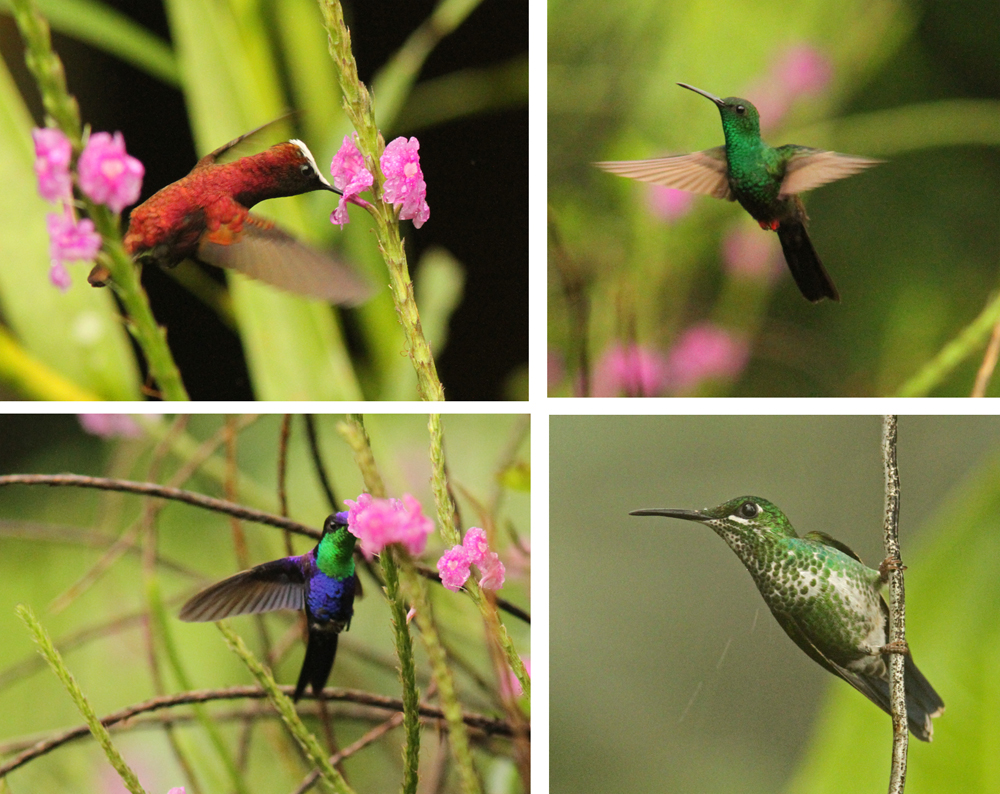 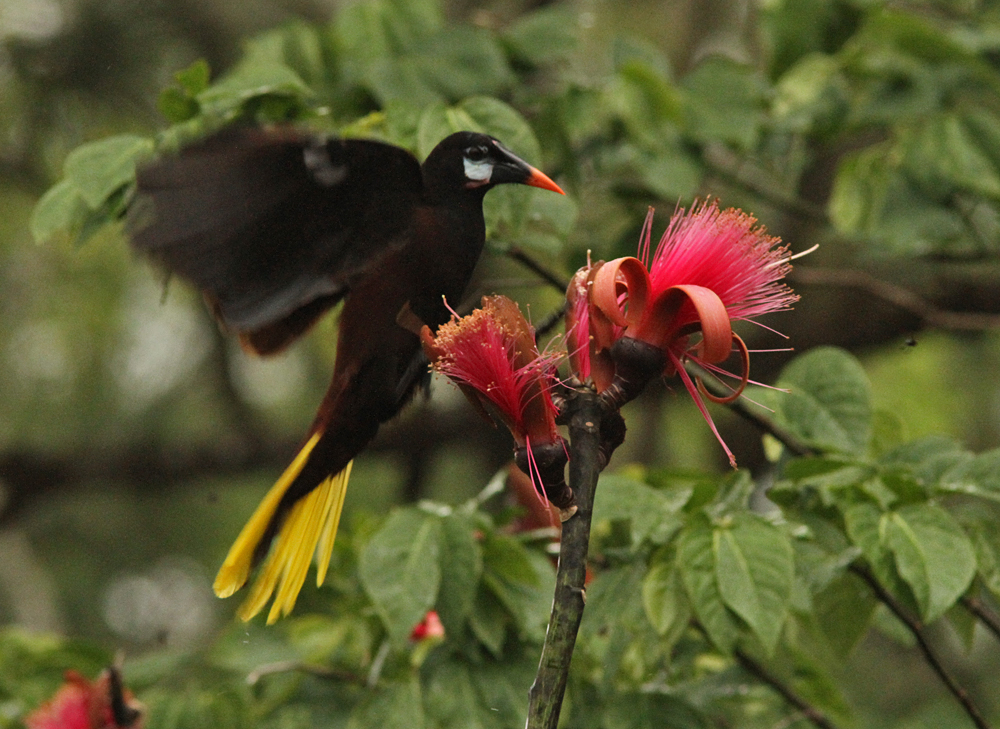 And likely Sunbittern and who knows how much more?
All this for a little over $1500, arranged through Costa Rica Gateway.  If you want to comparison shop, here's a very similar tour through Field Guides that's literally twice as expensive.  Each of my last 2 trips there (through CR Gateway) have tallied a little over 300 species with 20-30 species of hummingbird each time.  But don't wait too long, I don't have many spots left!
Posted by Matt at 9:15 AM No comments:

Work schedule's been incredibly dense of late and I've barely gotten out.  Last week I went with the kids to Sarett prairie to see what odes were about.  There've been darners in some of the corners at times during the summer and apparently this is the time of year they're most prominent.

Fairly quickly we found some largish colorful ones, though they evaded the net for a firm ID.  Hazel spotted where one landed after I swung at it and I took a few pics of the out-of-reach ode. 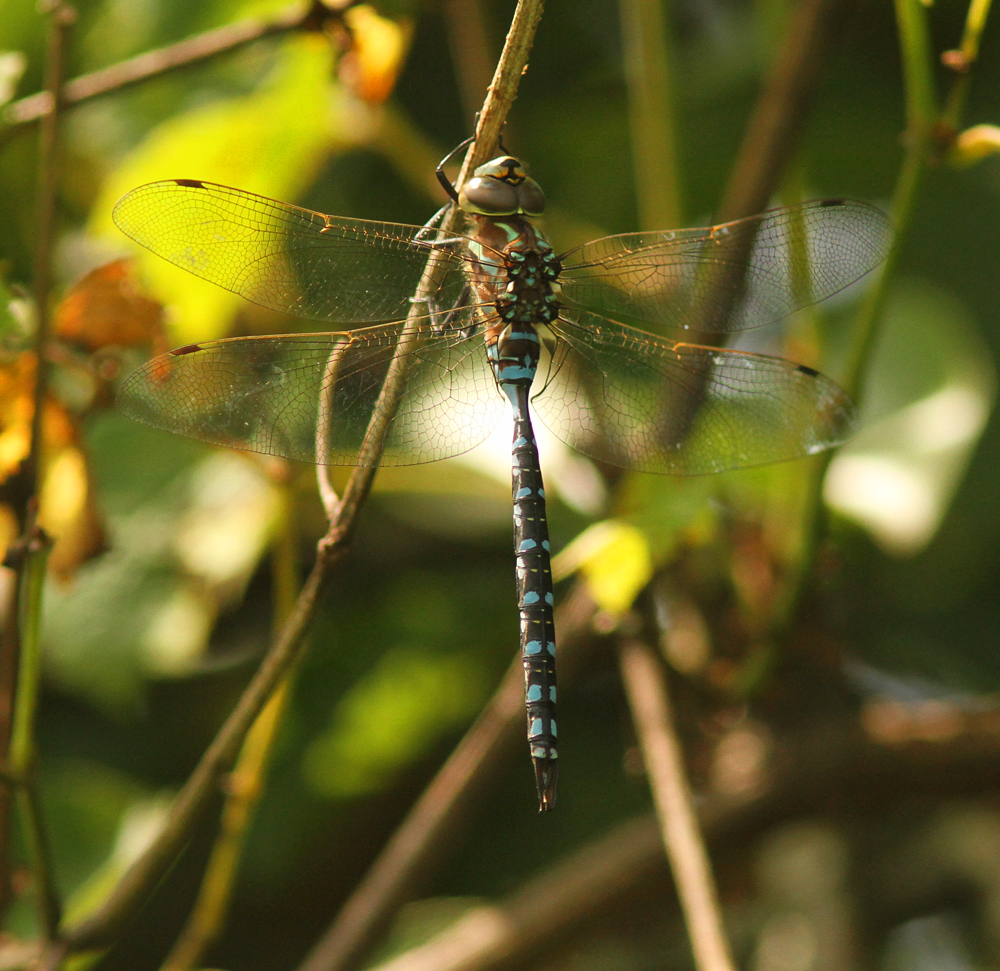 I think that based on the pattern of striping on the sides that it's a Green-striped Darner, though Canada Darner is very similar.  It'd be nice to see one in the hand to be certain.  [See comment below about why it's probably neither of those, but Lance-tipped instead].

Next is a Fawn Darner, an ode that's fairly widely distributed in Michigan but that I'd never encountered before. 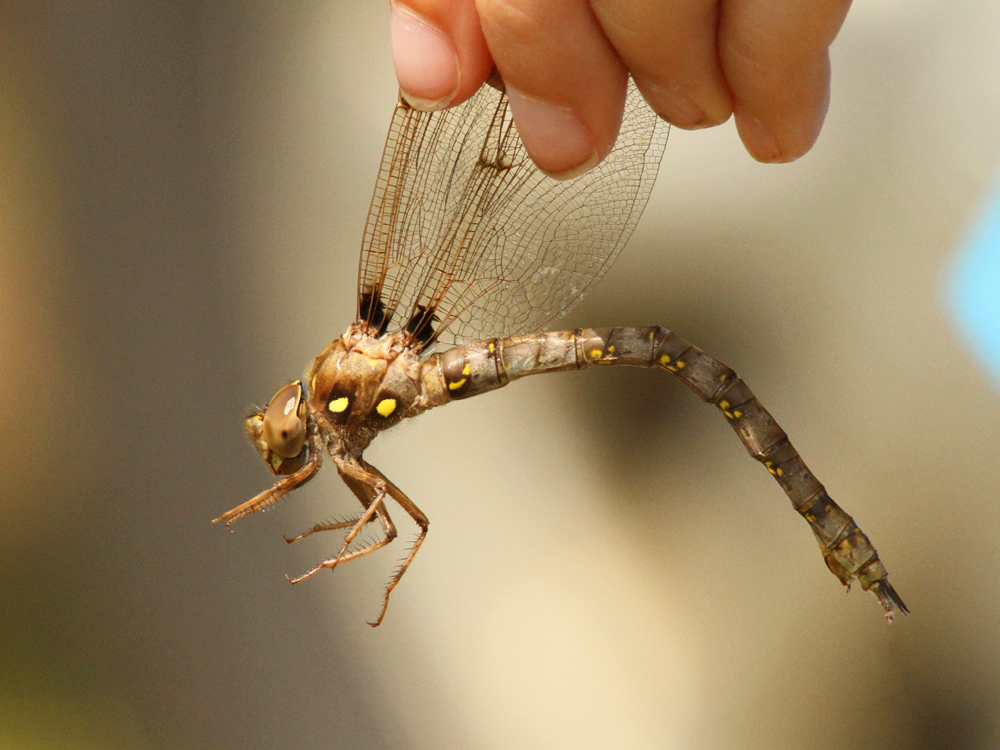 It remained on the twig we set it on when we let it go long enough for a few more pics. 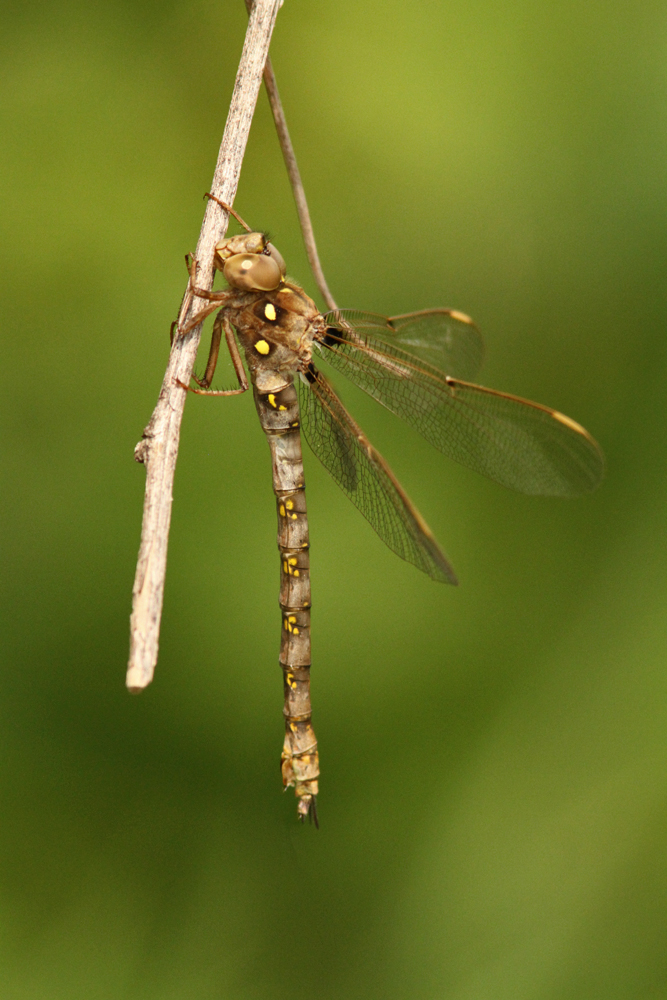 Finally Hazel with a meadowhawk.  Both girls think it's high humor to release them from their noses. 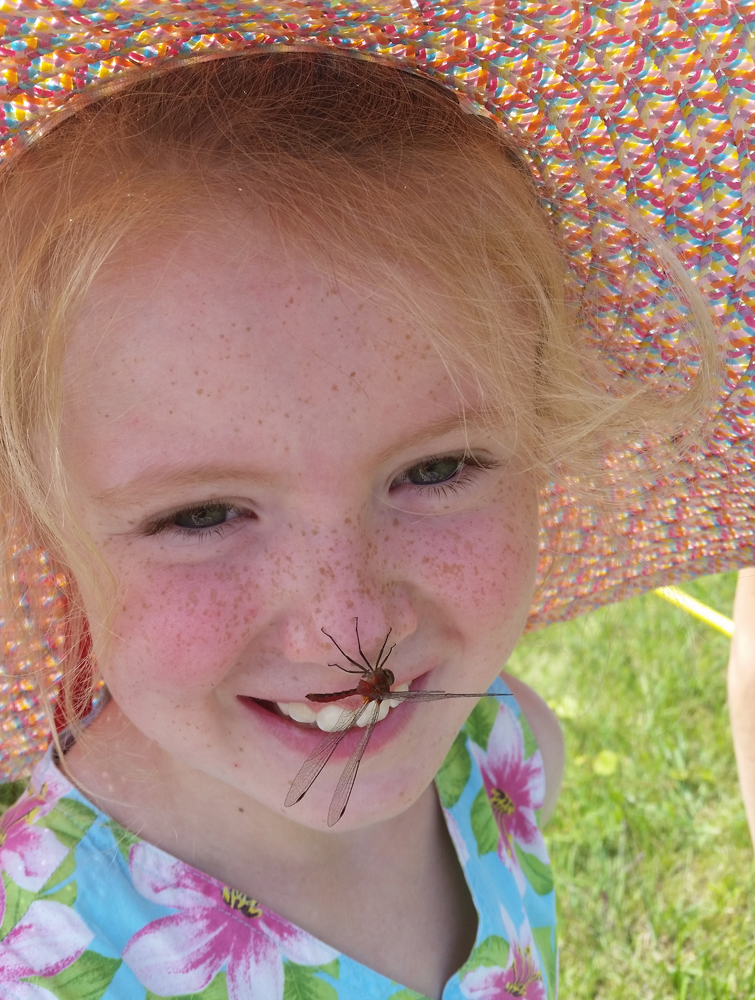 the Medium terns in Late Summer

I walked Tiscornia to Jean Klock yesterday without shorebirds of interest, but there were some quite tame terns in with the gulls.  In the spring the terns are fairly flighty, these ones have clearly become accustomed to people.  Which was good since I was having trouble telling them apart from a distance.

The problem is that you don't really think of them as having different plumage in the fall as the spring, but they change enough to be troublesome.  The Common is on the left above and the Forster's on the right.  When I'm up close, the shorter legs and trimmer build of Common stands out.  At the right angle the darker mantle of Common is helpful, but at a lot of sun angles there's not a ton of difference even with direct comparison.  With direct comparison the redder bill and legs of Common is frequently a shade darker in the field than the orange of Forster's

Here's a Forster's showing another problem with fall ID: 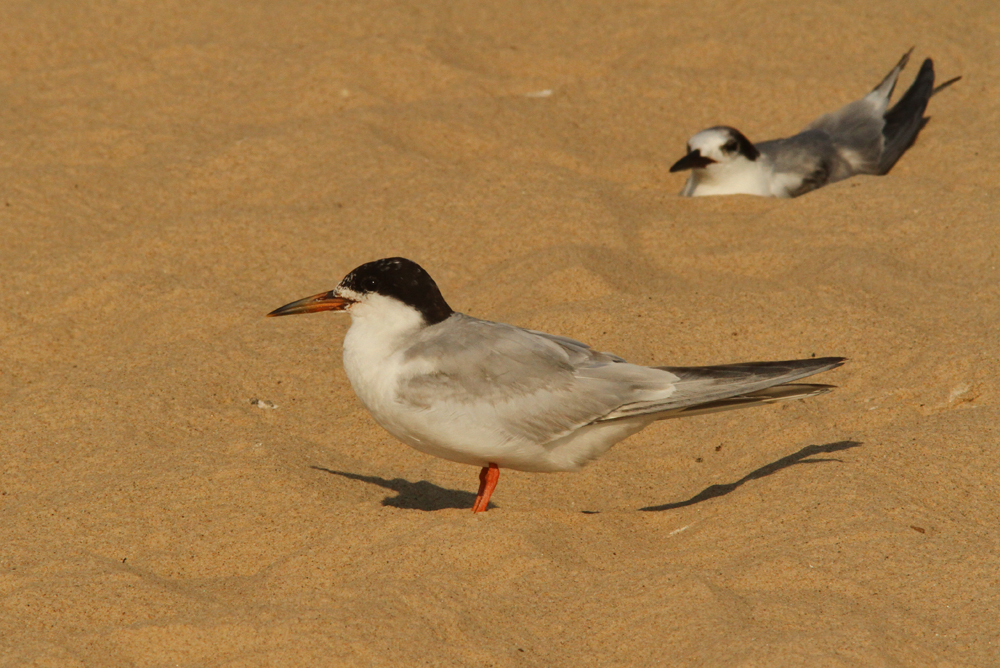 It's either moulting or has broken off its outer tail feathers meaning that the tail falls short of the end of the wings as Common generally does.  In spring Forster's tail will extend an inch past the primaries.

This bird, a little farther along in moulting (as evidenced by the cap) has the tail at the proper length. 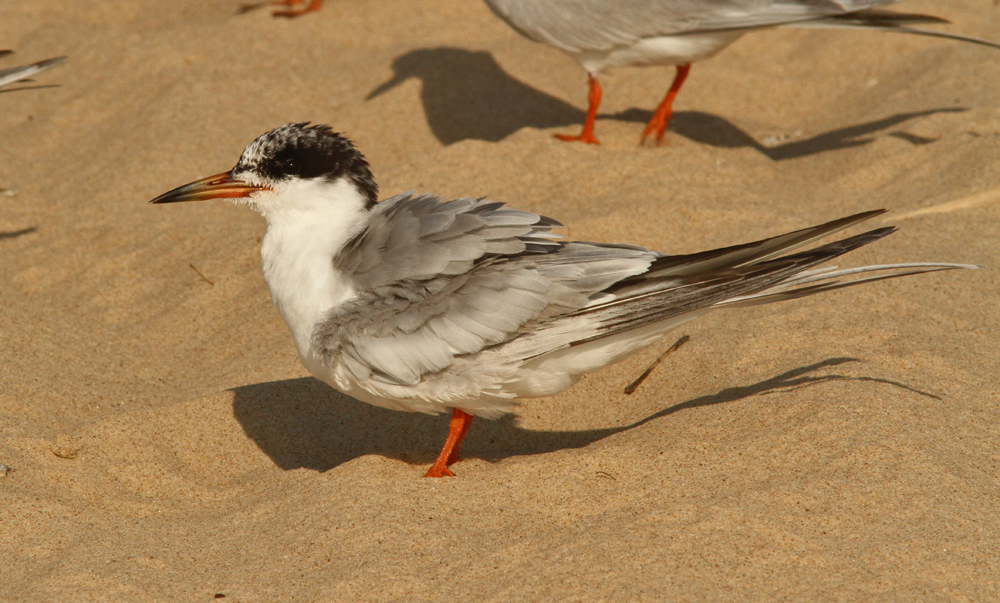 The primaries are also noticeably darker in the fall.  Tern primaries have a fine bloom on the feathers which gives fresh feathers a much whiter look.  With that worn off Forster's primaries become medium cold gray at some angles rather than the brighter white of spring.

It varies though, upon both individuals and the angle. 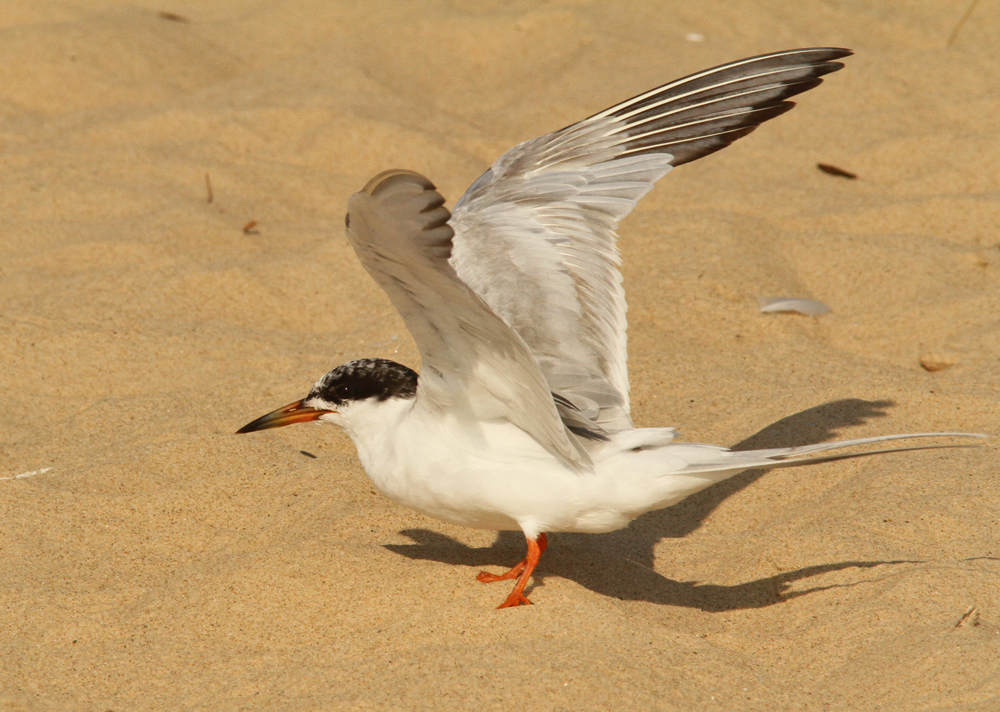 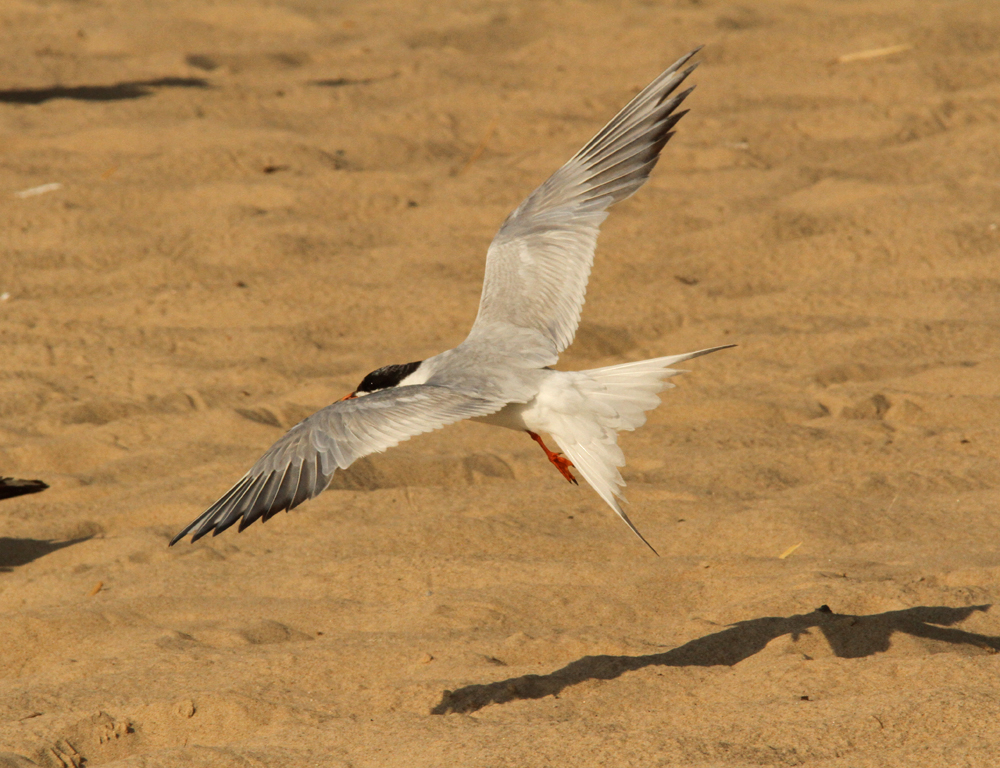 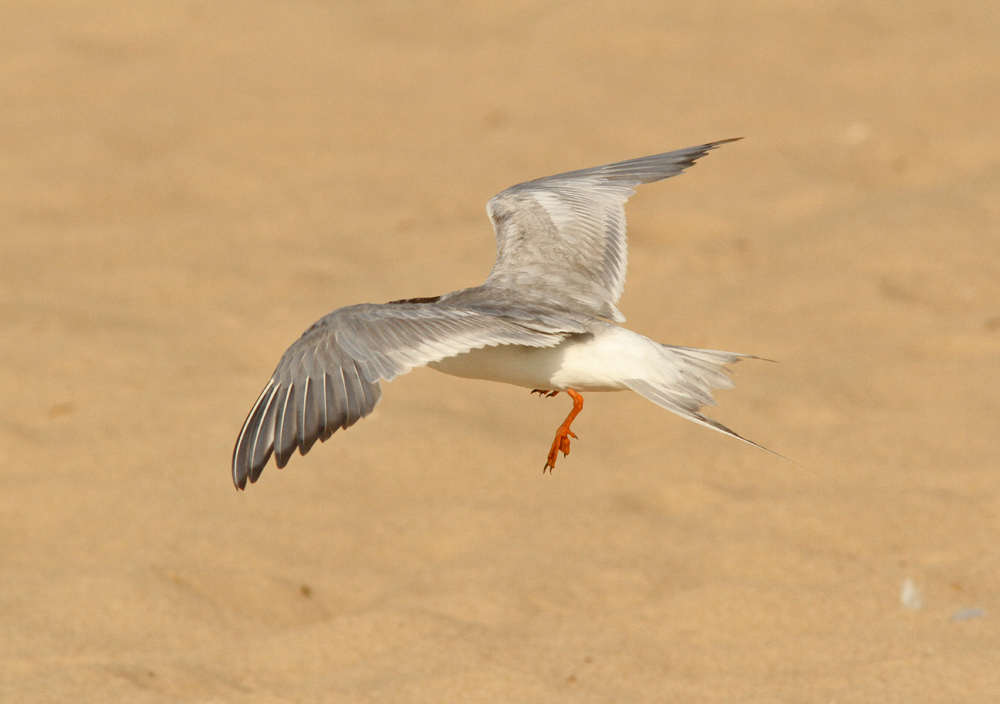 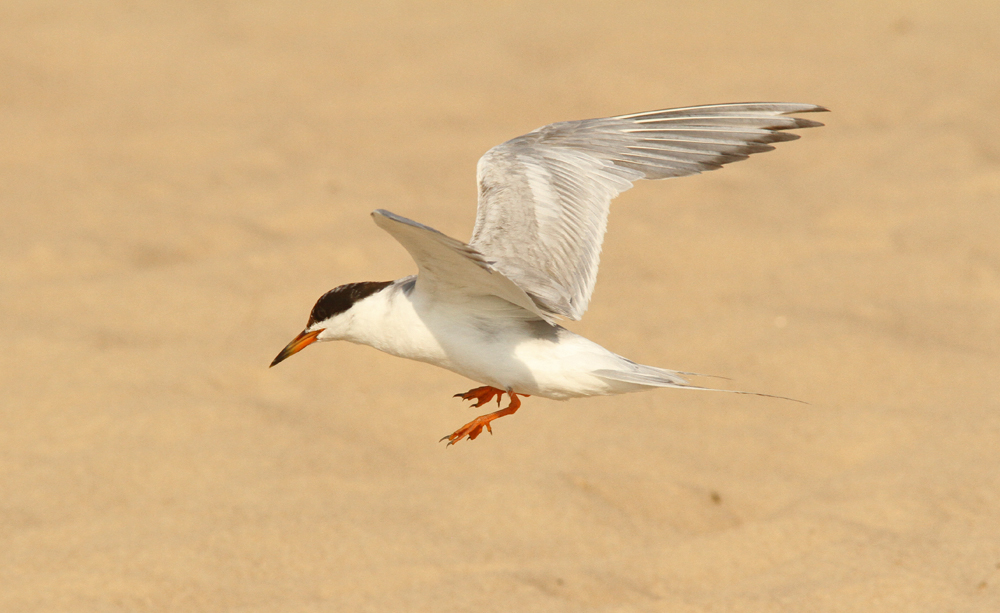 Moving to Common, they also have darker wings than they exhibit in spring, quite blackish when folded. 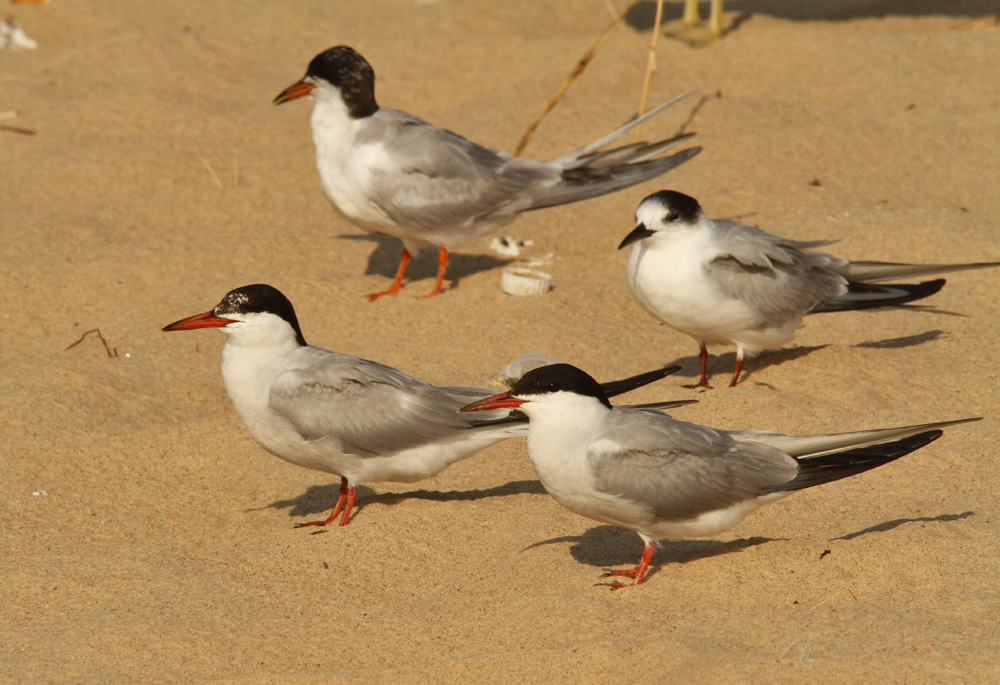 The above group are 3 Commons in front (with the front most bird still having grayish underparts and a full cap with the Common on the right being 1 year old) and a longer-legged rangier Forster's in the back.

The primaries aren't as dark in the spread wing than as when folded, which doesn't make it easier to tell them apart. 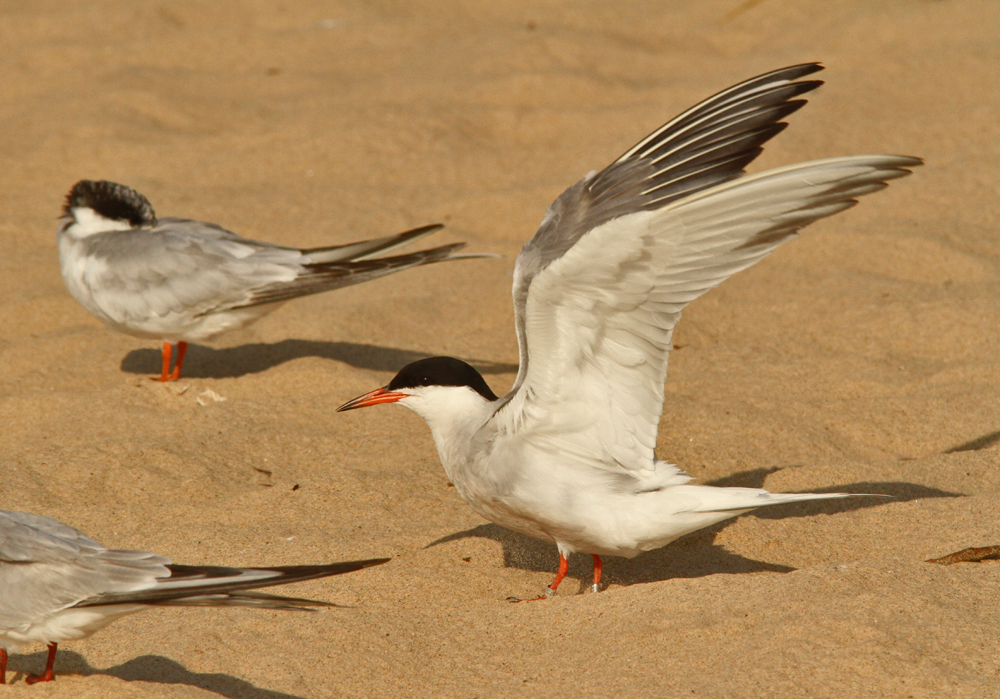 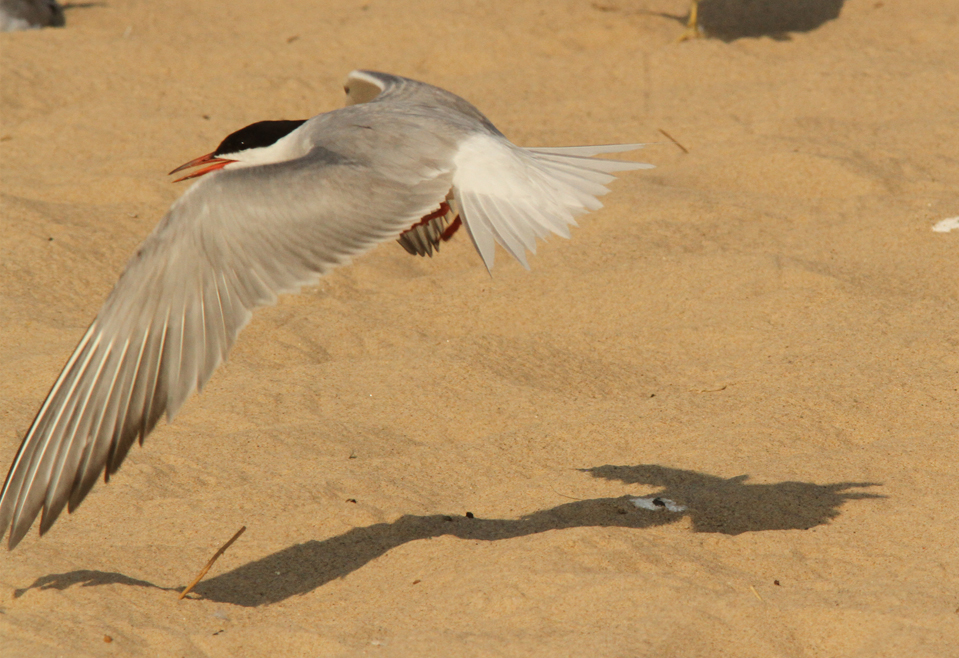 Finally the one-year old Common's that are present. 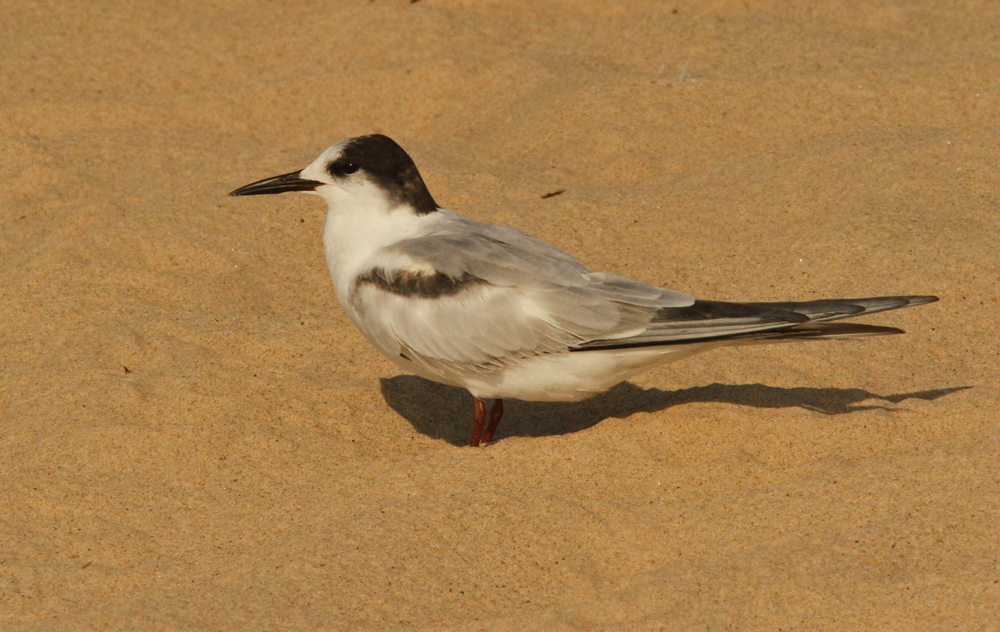 The dark carpal bar (which juvies will also show when they arrive) is a dead giveaway that it's a Common.
The (quite faded) one-year-olds are quite pale in flight. 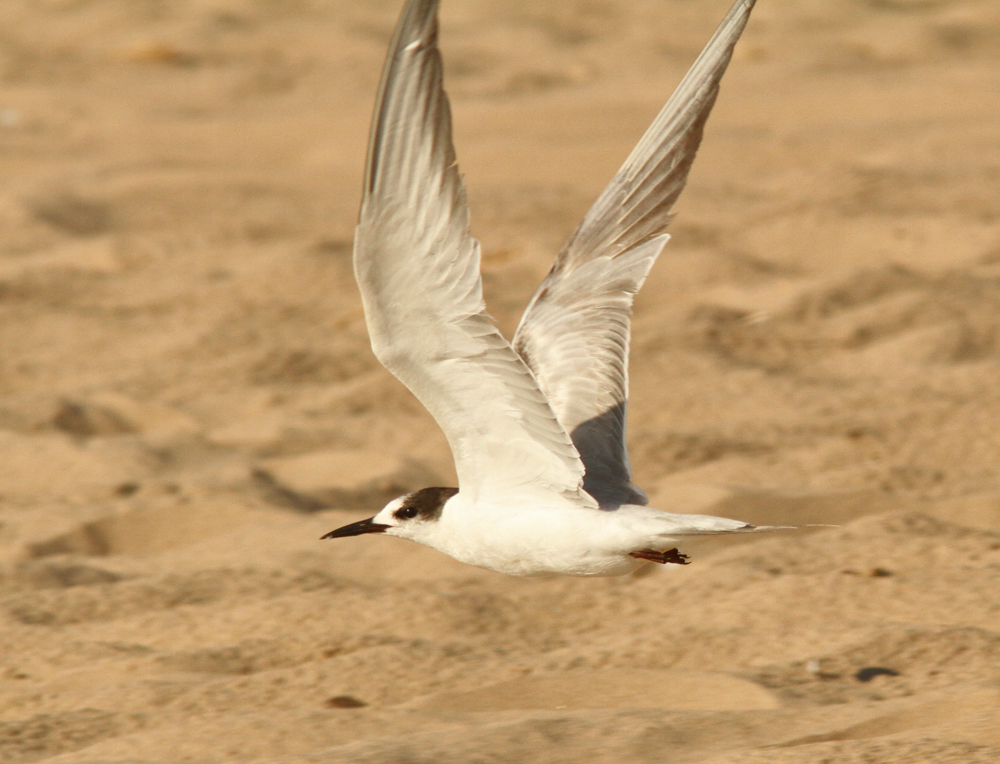 The other ID difference you may have noticed is that a portion of the Common Terns are banded, I didn't see any banded Forster's.
Speaking of which, I added a comment from one of the plover researchers, one of the Piping Plover juvies is from Ludington and one from Sleeping Bear.
﻿
﻿
Posted by Matt at 3:19 PM No comments:

Rhoda found a pair of Piping Plovers at Tiscornia yesterday.  They were still there in the afternoon when I went by.  In the 8 years I've lived here I've seen them exactly every other year.

I was expecting them to be half or 3/4 of a mile north of Tiscornia since that's the area most free of people when the beach is busy.  Instead they were a hundred yards north of the Tiscornia just standing there resting.  I took a couple pics with the SLR but kicked myself for not lugging the scope out to be able to read the bands.  This one has some blue on both legs. 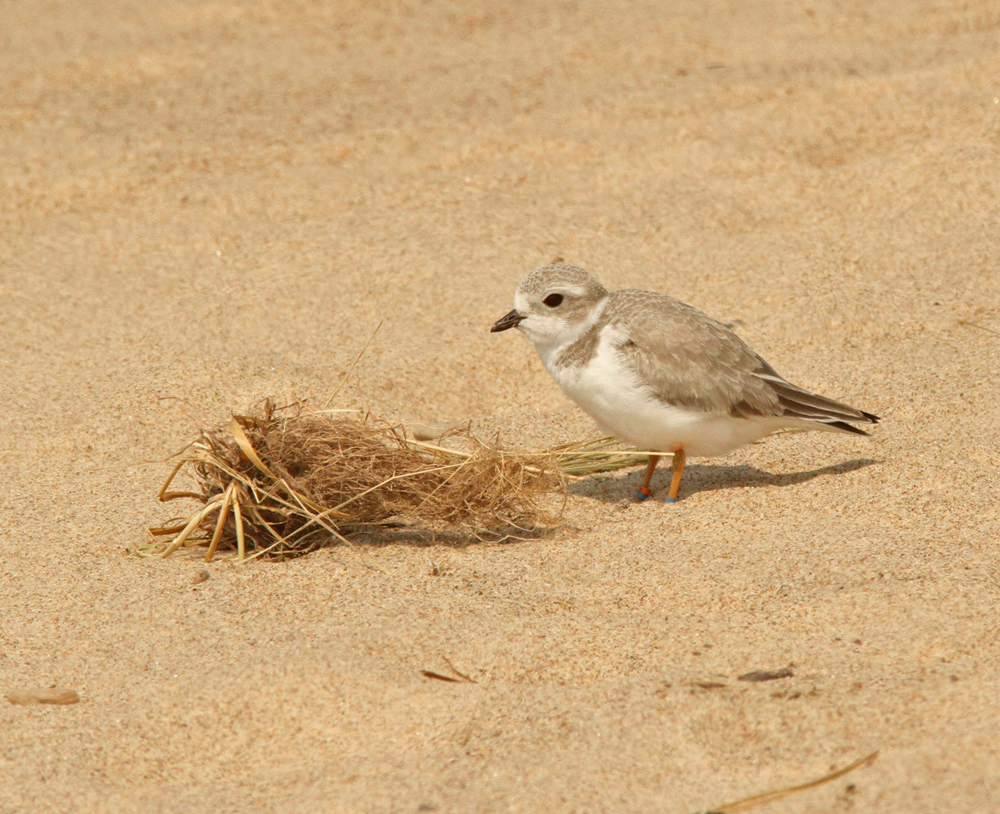 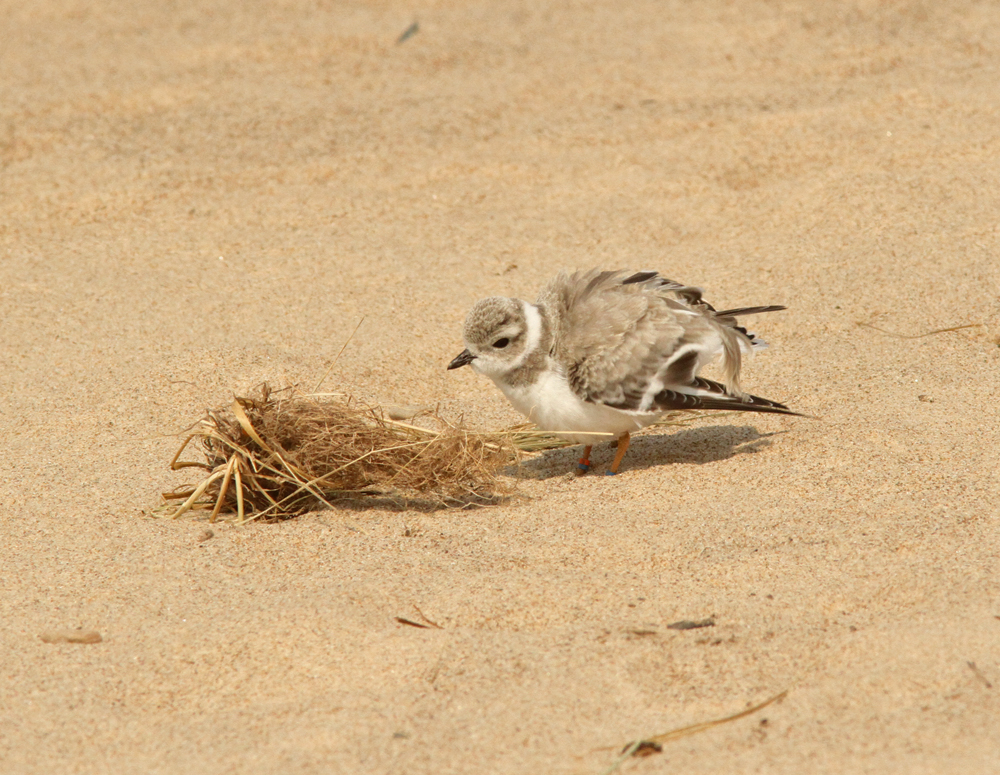 The other one had no blue. 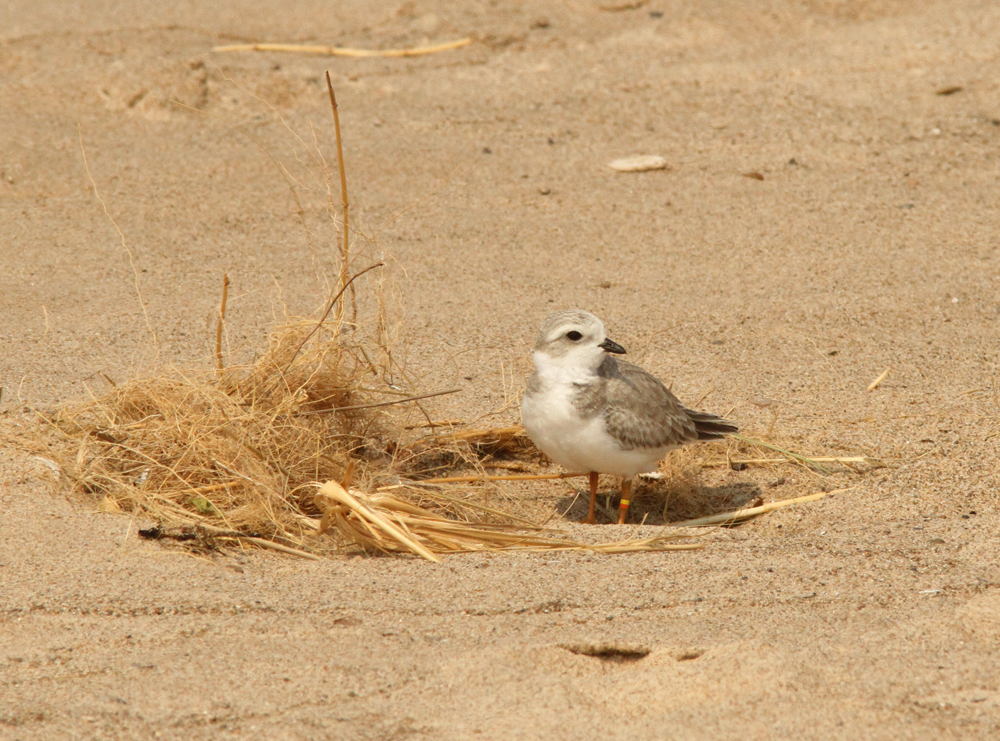 If they were any other species I'd have crawled up to them on my belly, instead I returned to the car to get the scope.  Beachwalkers got them up and moving about though and only the second one stuck around for me to try to phone-scope it 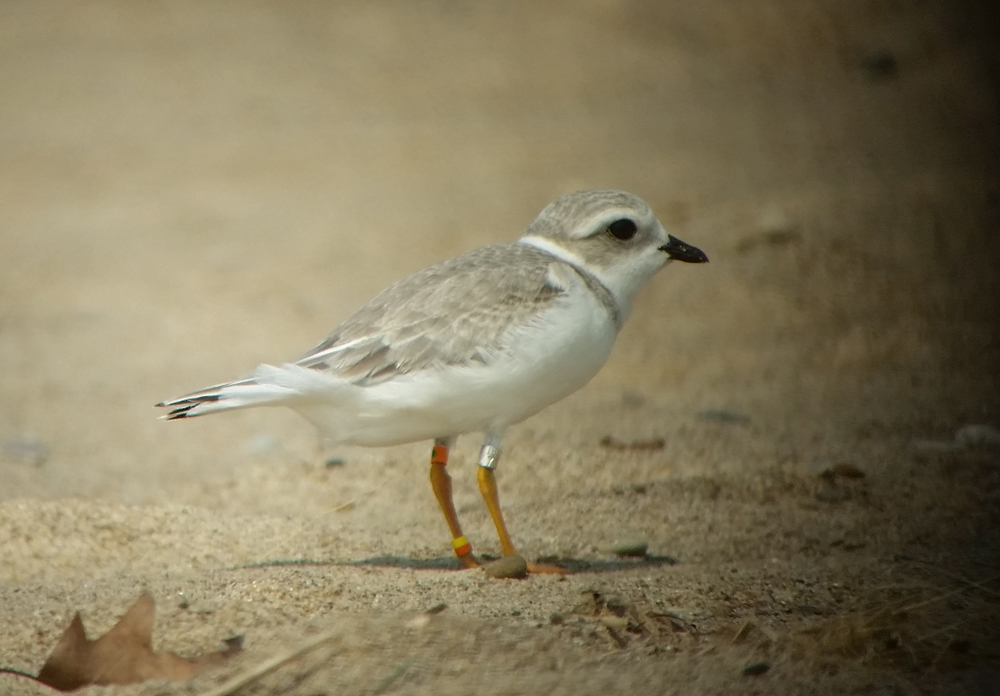 The left leg has an orange band with a green circle above the knee with a yellow over orange band on bottom.
I'll do some investigating online and see if their origin is deducible. 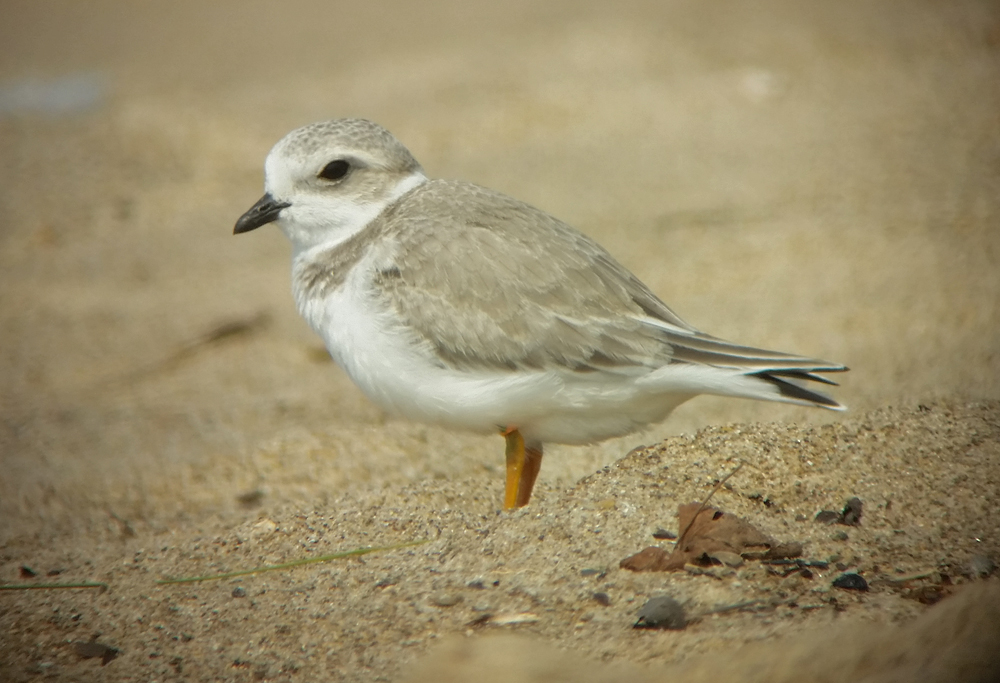