I drove a bit of a central county route this afternoon.  Mary Jo and Marie were looking at a pair of White-fronted geese at the Scottdale Rd flooding when I drove up. 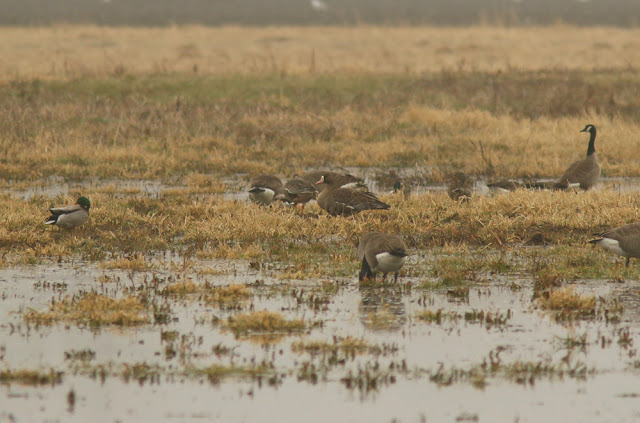 Four more white-fronts flew in, thought about landing, circled, and then landed across the road, drawing my eye to the Ross's that was sitting distantly close to some grapevines.

I tried a few more spots not finding much aside from Mute Swans and was heading toward home when I noticed a bunch of geese at the Anna Lane Flooding.  Not terribly surprisingly there was a Ross's type in with them as well.

It has some blue wartiness to the bill base... 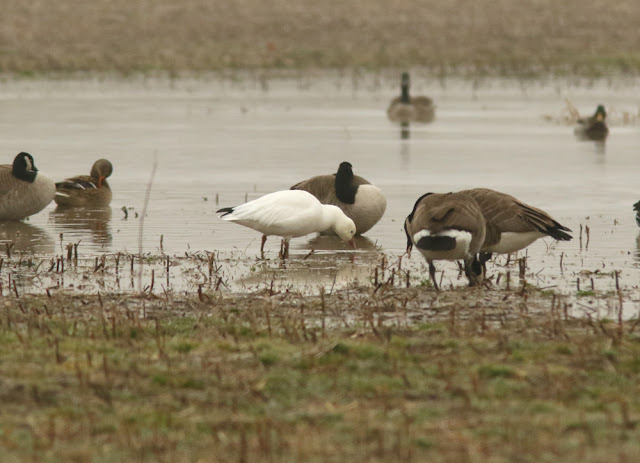 but the head is less round than yesterday's Ross's Goose 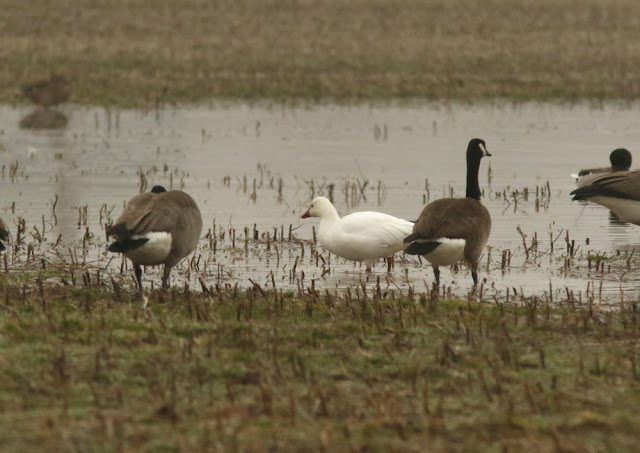 And you can see that the bill base has a decent amount of curvature where it meets the face. 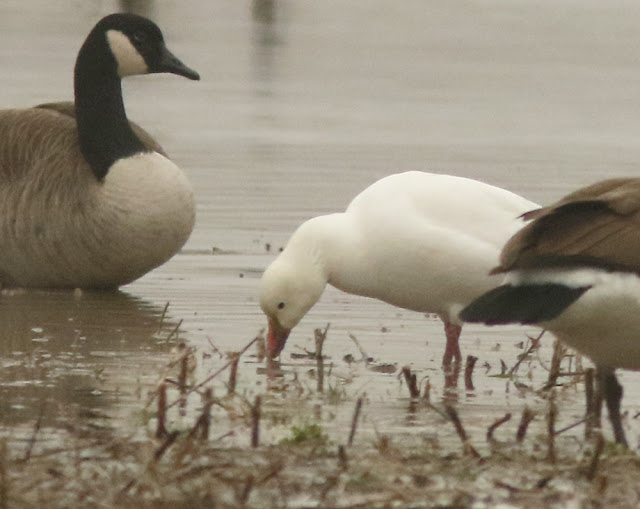 A curved bill base is generally accepted to indicate some Snow Goose in its not-so-recent ancestry; this bird is likely an integrade.
After finding this bird I actually drove back to Scottdale to make sure that the original Ross's was still there; it was.
Posted by Matt at 2:30 PM No comments:

After striking out entirely on geese in the Scottdale plains where Rhoda had found a Ross's Goose earlier I did the next best thing and headed for the beach.  I wasn't expecting very much, and indeed there were few birds by the piers given the amount of boat and foot traffic on a 60 degree January day.  I was just finishing my last scan when I picked up a distant Snow-type Goose flying off the lake.  It landed off Jean Klock and I drove up to get better pics.  My camera was giving me trouble and not auto-focusing or stabilizing so I went back to phone-scoping with the scope zoomed in to 60x.

I was pretty surprised to see it also was a Ross's Goose. 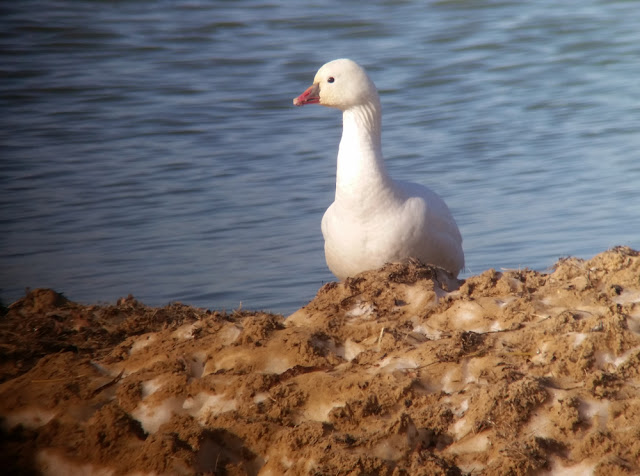 Note the round head, vertical bill base with blue wartiness, and the pale bill tip.  In the above pic shadow gives it the hint of a grin patch which was much more shadow than real.

Here's the bird with the bill not shadowing. 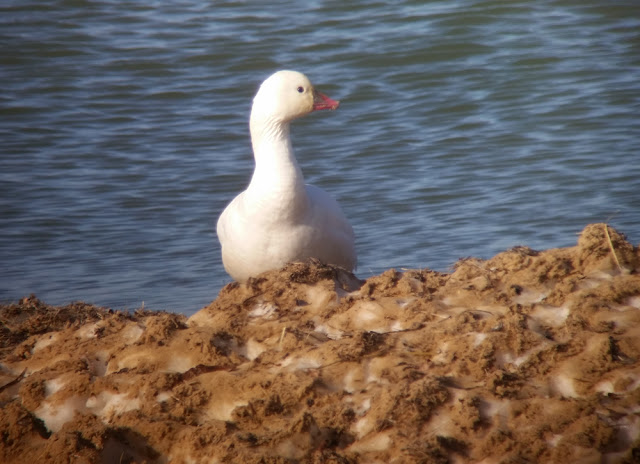 The bird flew after about 10 minutes and headed inland right past me.  This was total spray and pray with the shutter as I tried to manually focus through the bird and hoped a few frames would be sort of in focus. 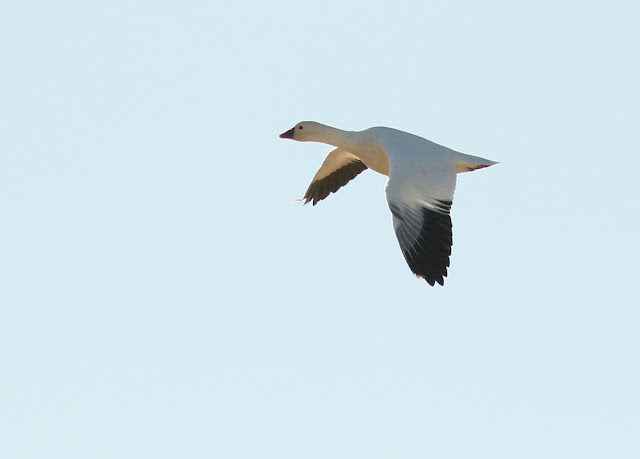 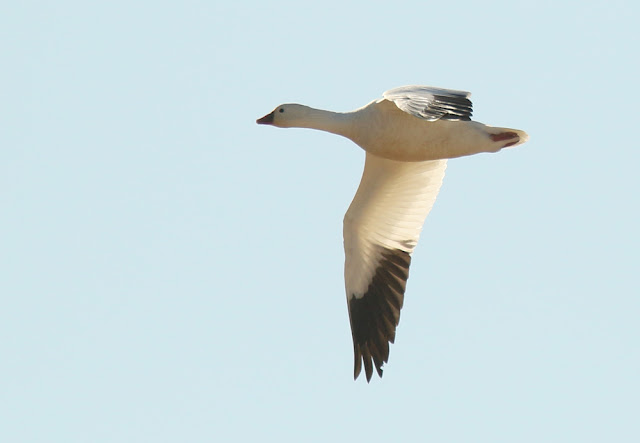 It'd be nice if I'd had a good excuse for not blogging, like maybe that I'd taken a fun and exciting trip to Panama to look for Harpy Eagles.  I haven't though.  (Yet.)  Rainy days and few birds have conspired to make it hard to take a bloggable photo locally.  The best so far this year was the 2nd bird of 2017, and the first that I saw. 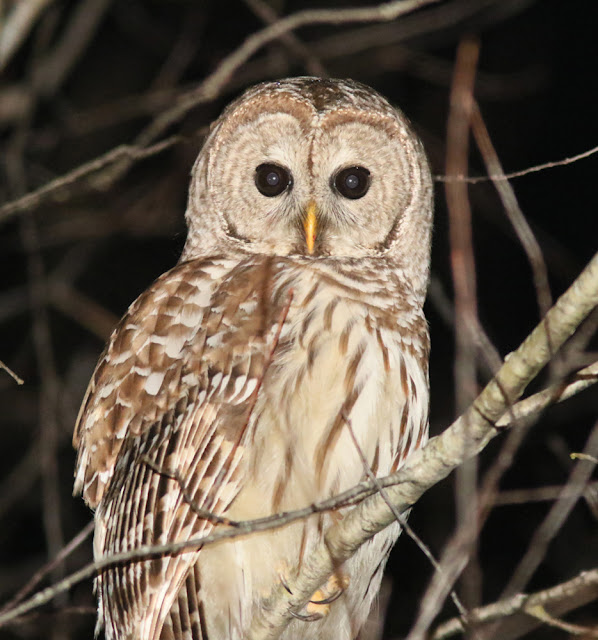 I haven't taken many night pics of owls.  I think this one flew in to investigate the screech owl I was whistling.  Needless to say, no small owls responded here.

I guess in light of today being Inauguration Day a shot of a Murican Eagle from Tiscornia yesterday wouldn't be amiss. 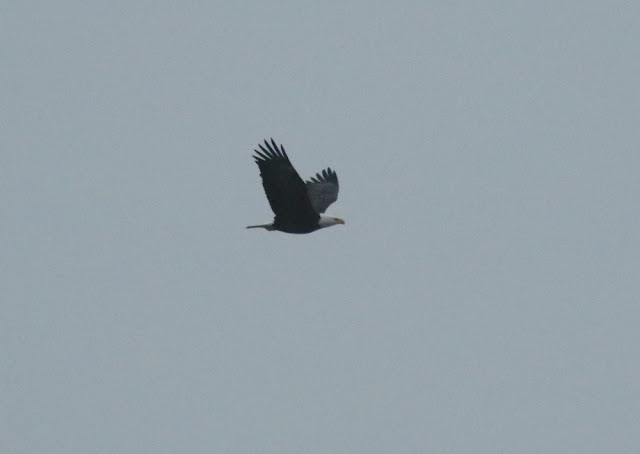 Maybe more appropriate is one from the dump flying away. 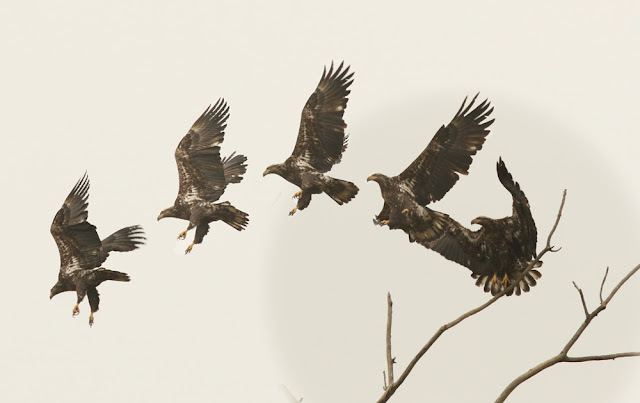 And maybe even more appropriate would be a herd of geese. 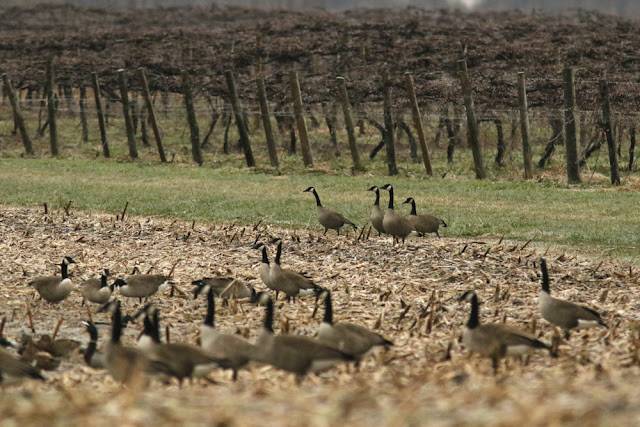 The attractive looking sub-group in back is interesting, they were a size smaller than the larger group and had a lot less pallor in the breast.  A person could try to make them Cacklings but their bills were just as long and thin in shape as the other Canadas.  Parvipes Canada might be considered but that one rarely has a dark breast so I think they're likely runty Canadas just from a little different location than the rest.