Though not all of them can pull off the stare-into-your-soul look that a Cobra Clubtail can... 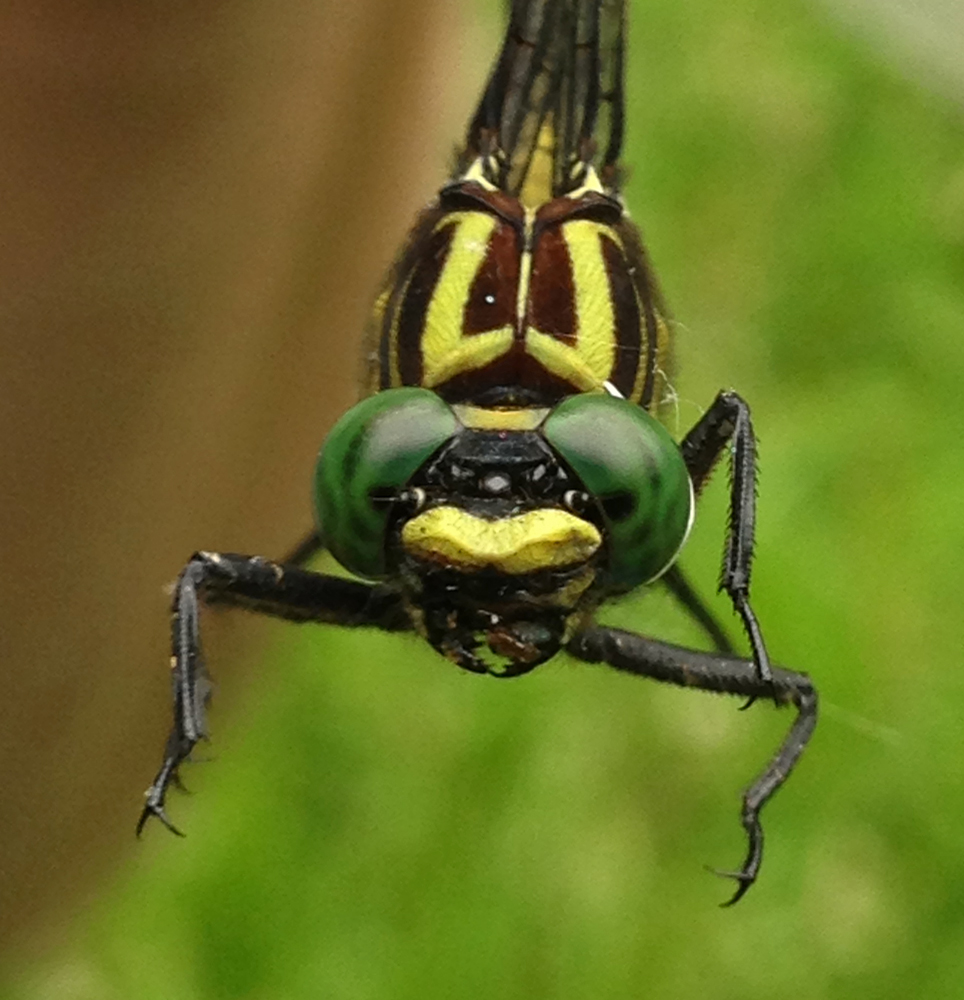 Frosted Whiteface's are much less intimidating, for a midday sun pic, the lighting in this one is not bad. 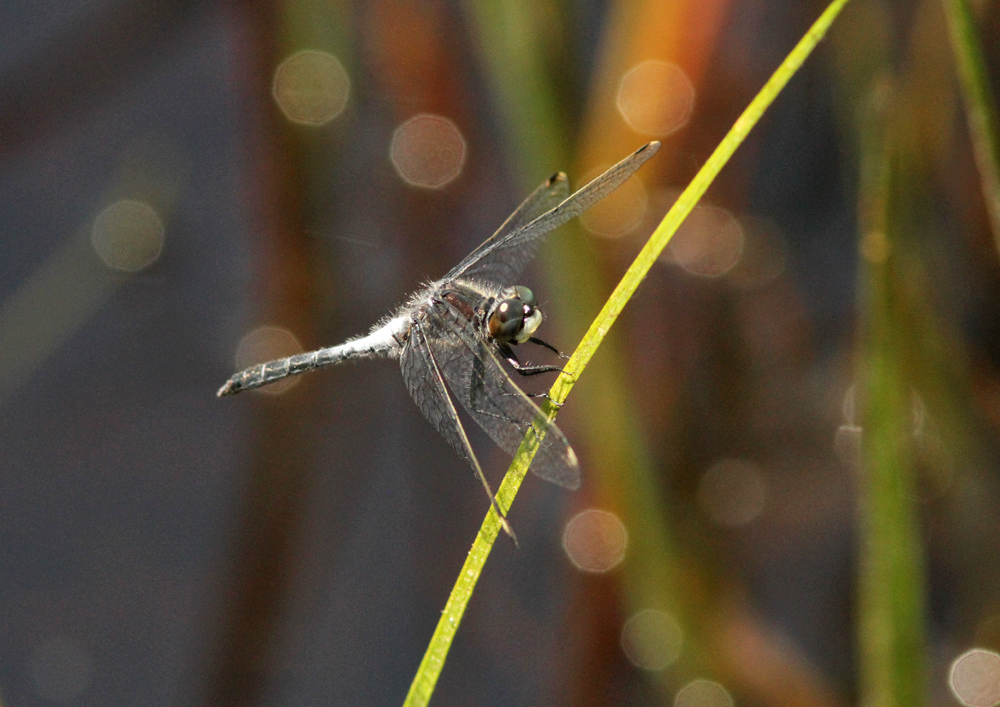 It's skimmer time of year though, this is 4-Spotted Skimmer.  I wasn't quite sure what it was.  It's relatively small for a skimmer, a somewhat hairy body with some yellow edging to the abdomen and some patterning at the base of the wings.  Holding it with the wings pulled back it looked an awful lot like a Common Baskettail.  I'd decided that was it was and gave it to Hazel to release.  It didn't fly right away and I took a shot of it on her finger. 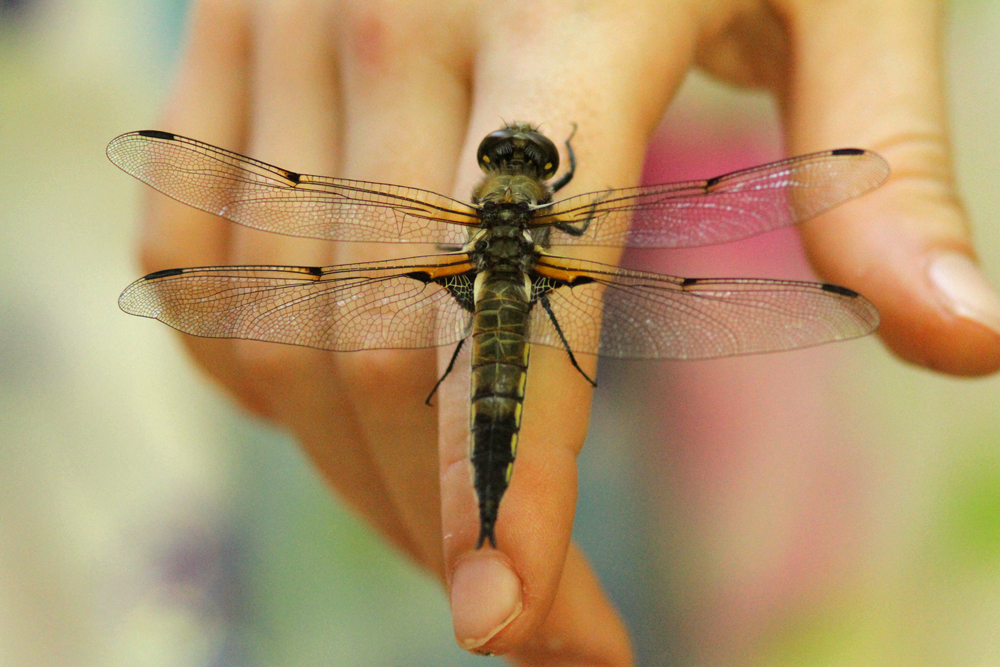 It was at that point I realized it was something different. Oops.  Fortunately it didn't fly.

No such ID problems with Golden-winged Skimmer. 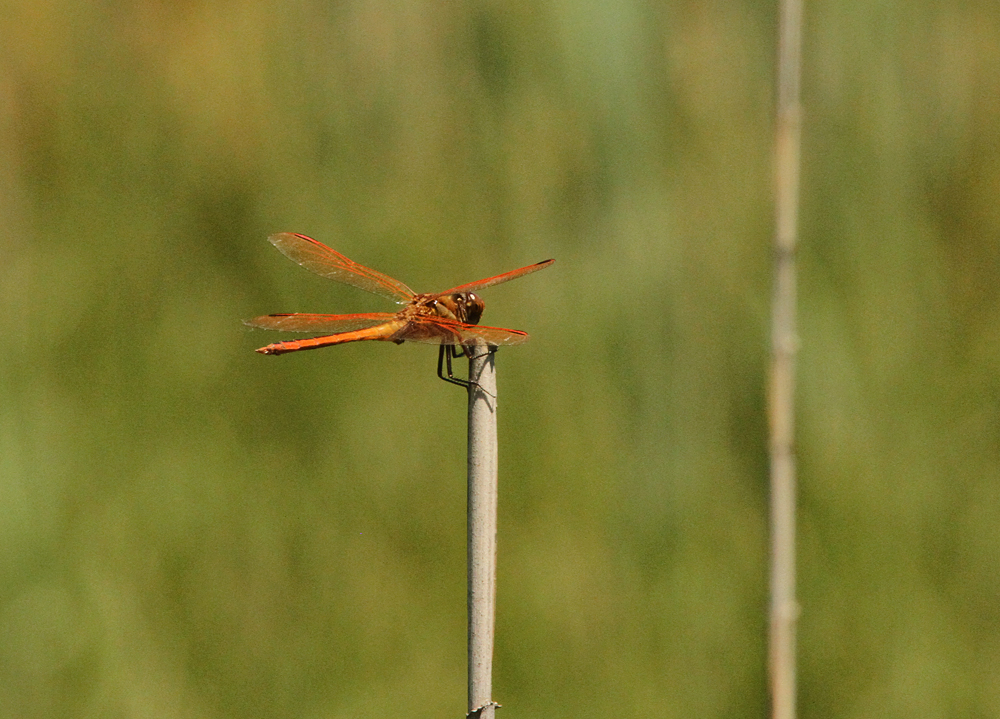 Or Painted, which I've featured before. 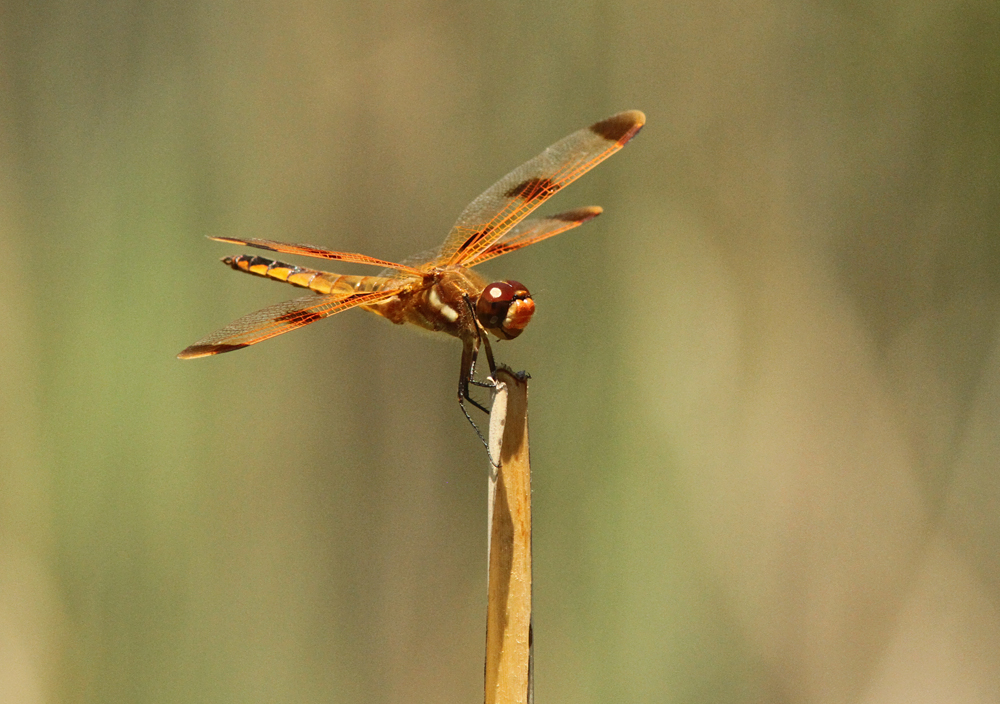 I don't have a good feel for darners.  Common Green is everywhere but I've only seen other species a couple of times.  This Cyrano was flying along the river on the way into New Buffalo Marsh yesterday. 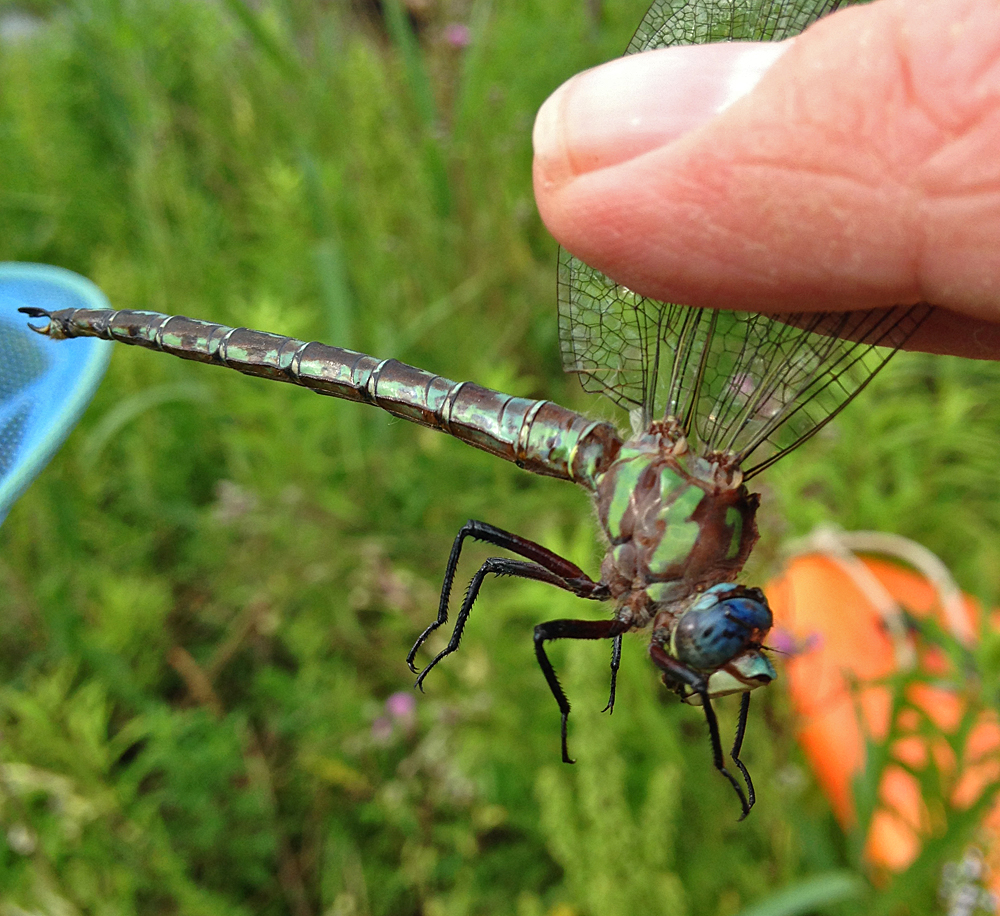 The brown and green patterning of the thorax and the way the frons ("nose" area) protrudes out from the face are ID points.

This is Rainbow Bluet, a tiny damselfly with attractive coloring that grades from orange in the face to yellow underneath and green above to blue at the very end of the tail 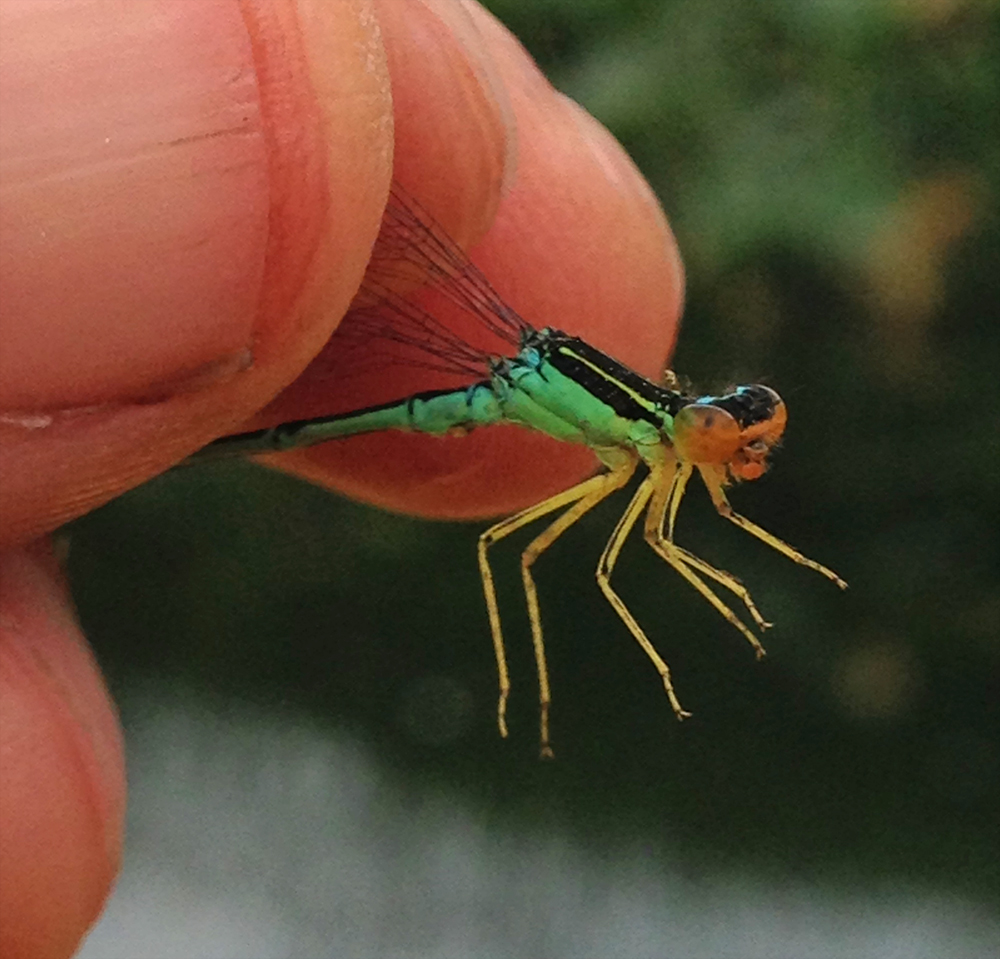 Finally proof that I haven't forgotten entirely about birds, a Common Yellowthroat trying to take eat some of its share of the local fly population. 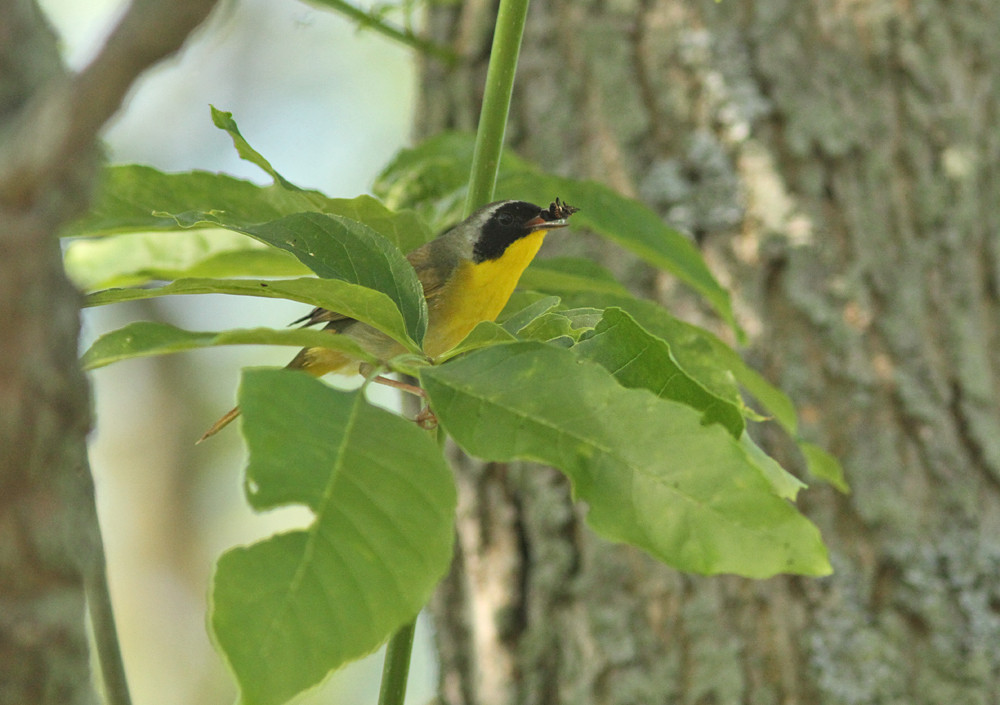 A week or so ago despite a lengthy survey for Blue Grosbeaks, the "bird of the day" was a Painted Skimmer.  A couple days ago on a 10 mile canoe float down the St Joe river looking for dragonflies struck out almost entirely, but had Prothonotaries every 1/2 - 3/4 mile.  We happened upon one nest which I returned to this morning.

It was foggy, overcast, cold and followed 2 days of rain which wasn't really ideal for lighting or kayaking upstream.  It was the morning I had though, so it was the morning I went.  Workers can't be choosers.  Both male and female were attending the nest, which I reached after about an hour of paddling. 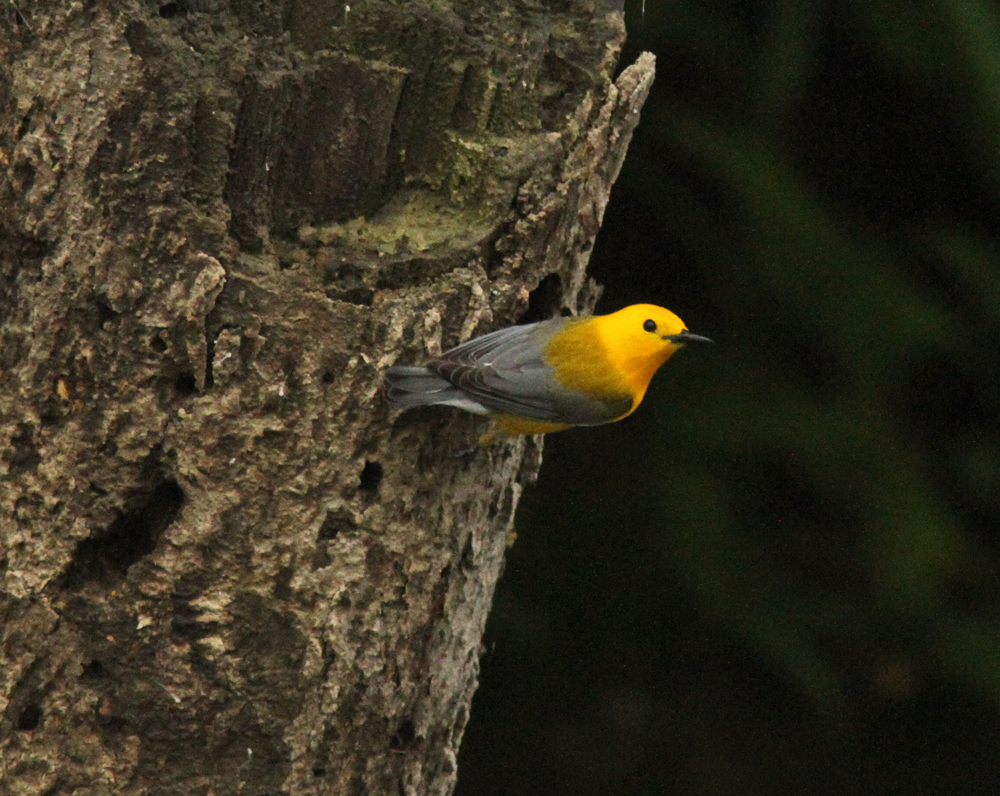 This is the female 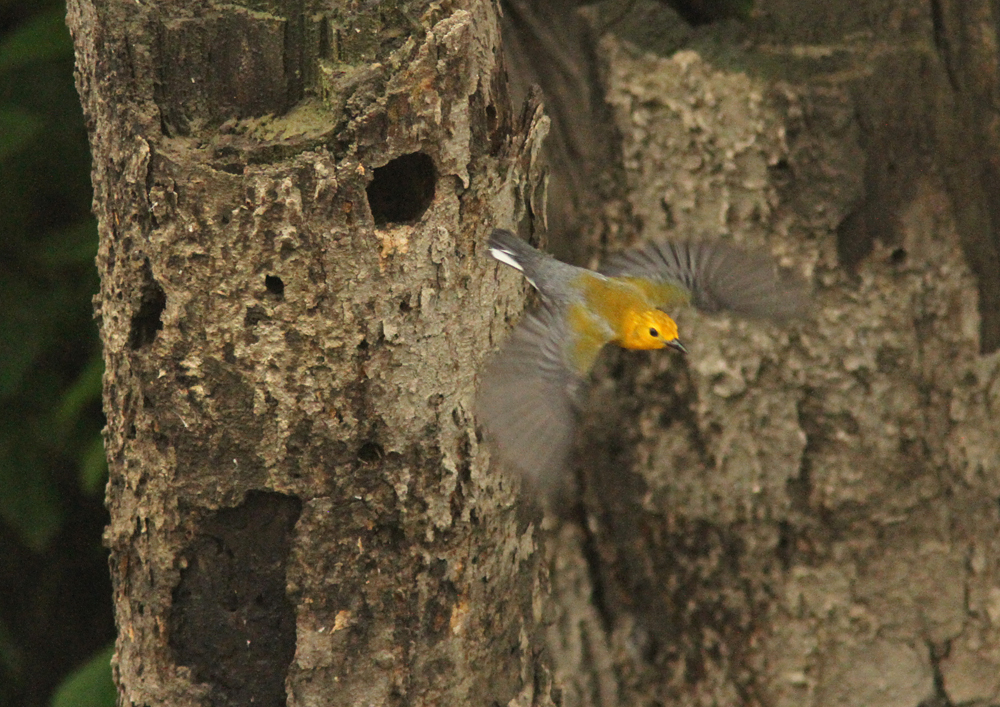 They pretty much ignored me standing on the opposite side of a channel, I think they categorized me in the Morbidly Obese Heron category.

I stayed back which allowed me to take some pics of the birds as they flew up.  They would land somewhat sideways for whatever reason.  I tried to keep the birds in their exact position in the frame on these montages; they look cramped but it shows the wingbeats. 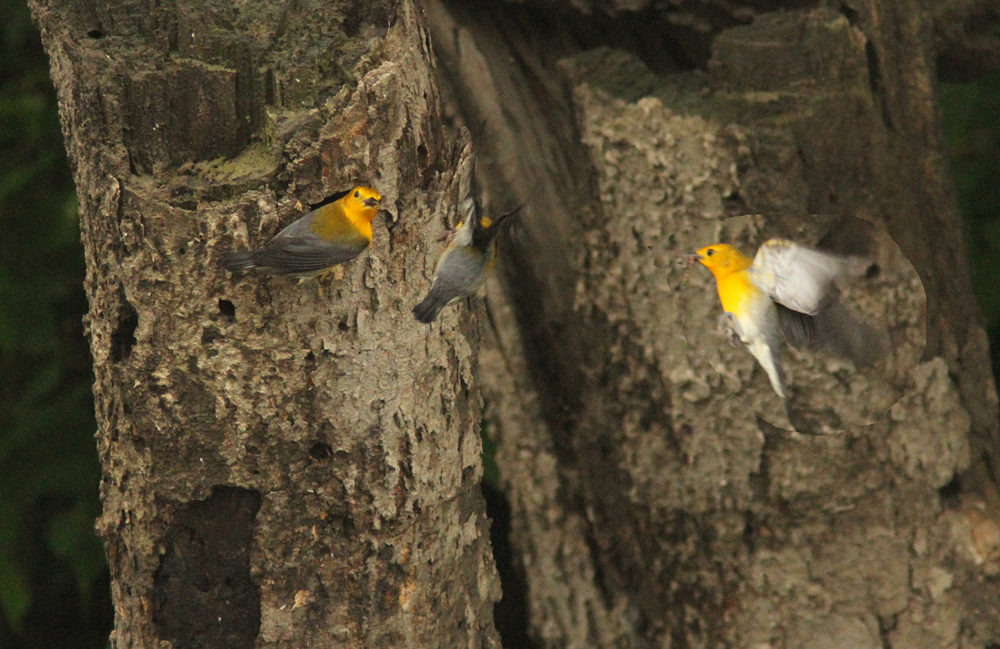 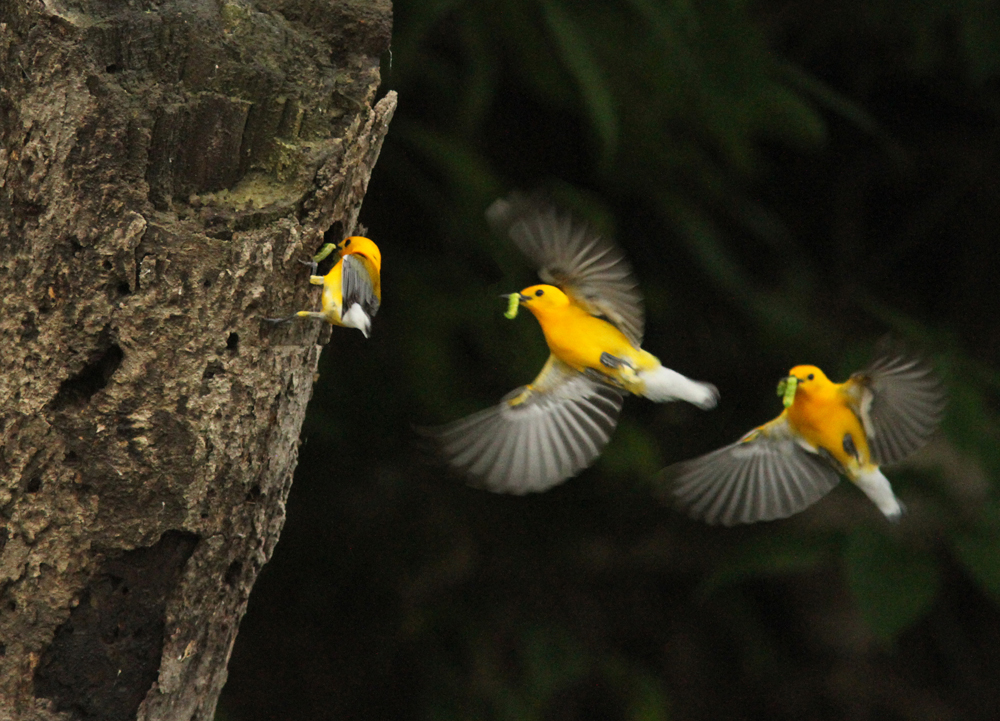 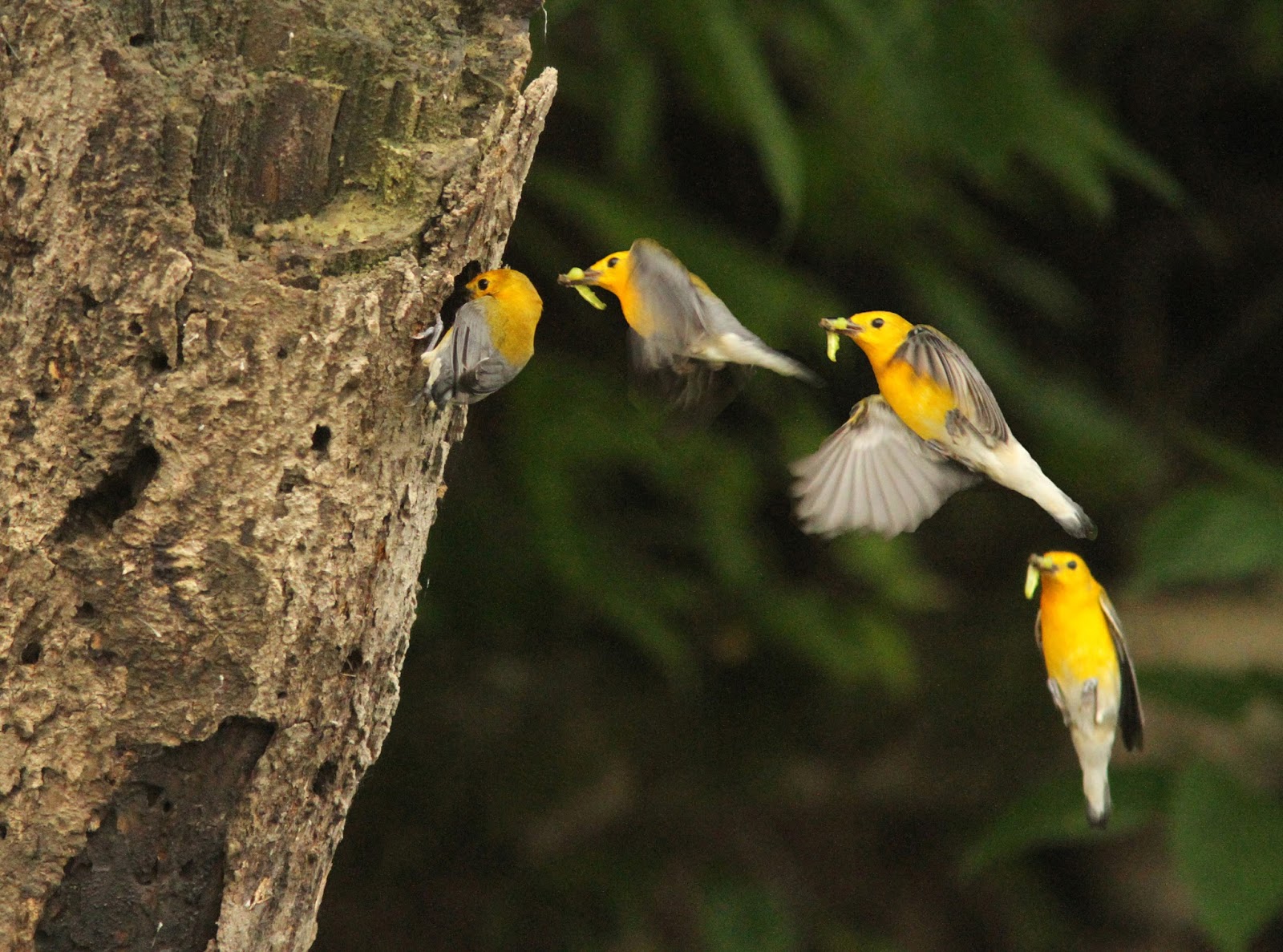 Inchworms seemed to be the main menu item, though the male ate a damselfly at one point. 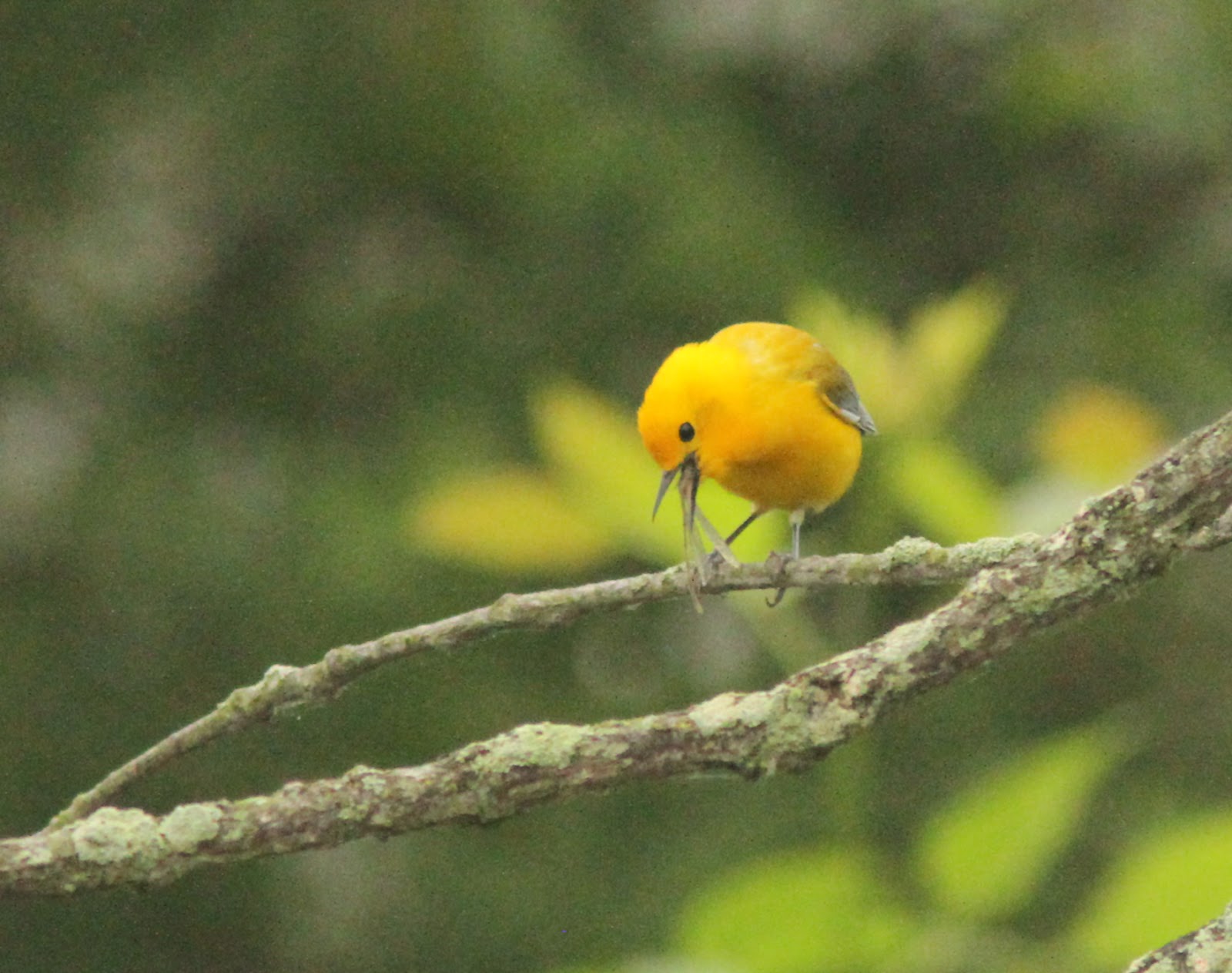 I was surprised how much they foraged right around the nest (that's how we spotted it in the first place); I don't think I've seen any other passerines that active right in its vicinity, though the narrow band of habitat along the river's edge is probably the reason. 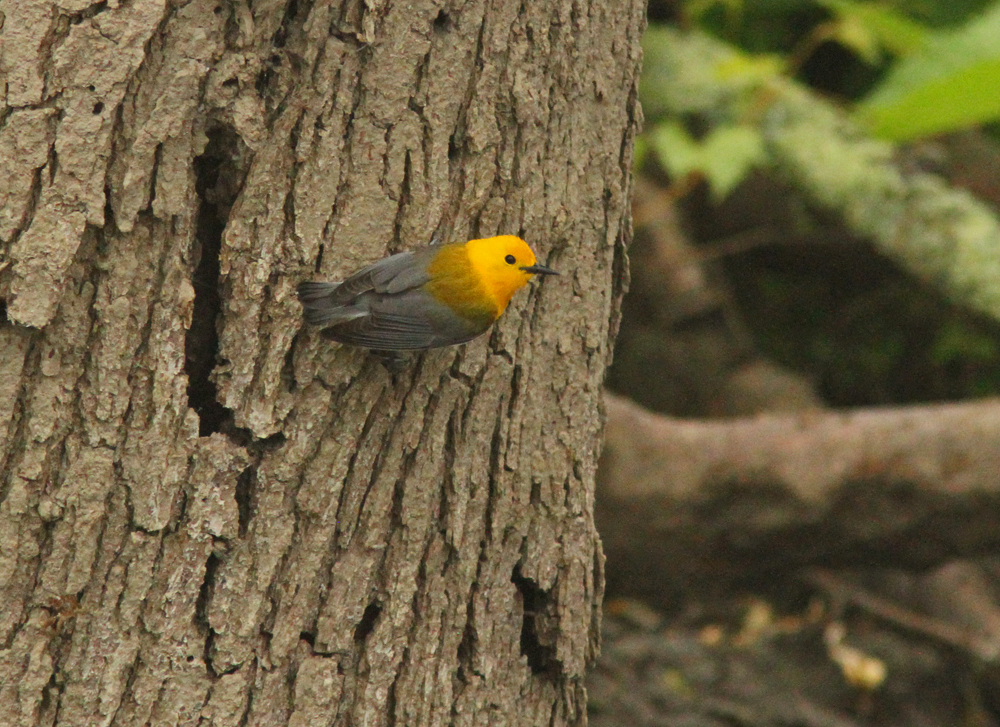 Finally, this one could be a caption contest. 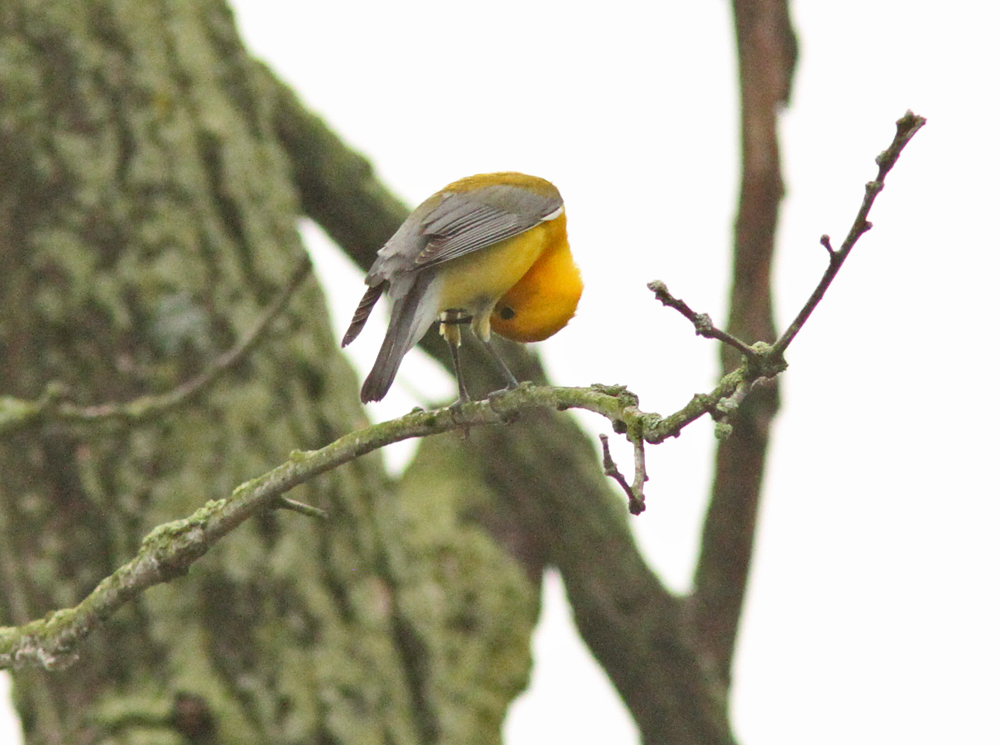 I'd be tempted to go back with a scope to digi-scope the birds and get much more full frame shots; all of these are cropped more than I'd like.

I haven't gotten out a lot lately, partially due to my schedule and partially due to, well, migration's over man.  But there's still interesting things out there (some even with 2 wings instead of 4).

I was hearing this chestnut sided singing down in the river bottom for about an hour before it really clicked on me that it might be worth trying to photograph.  I had about 10 minutes before I left for work but he turned out to be fairly cooperative. 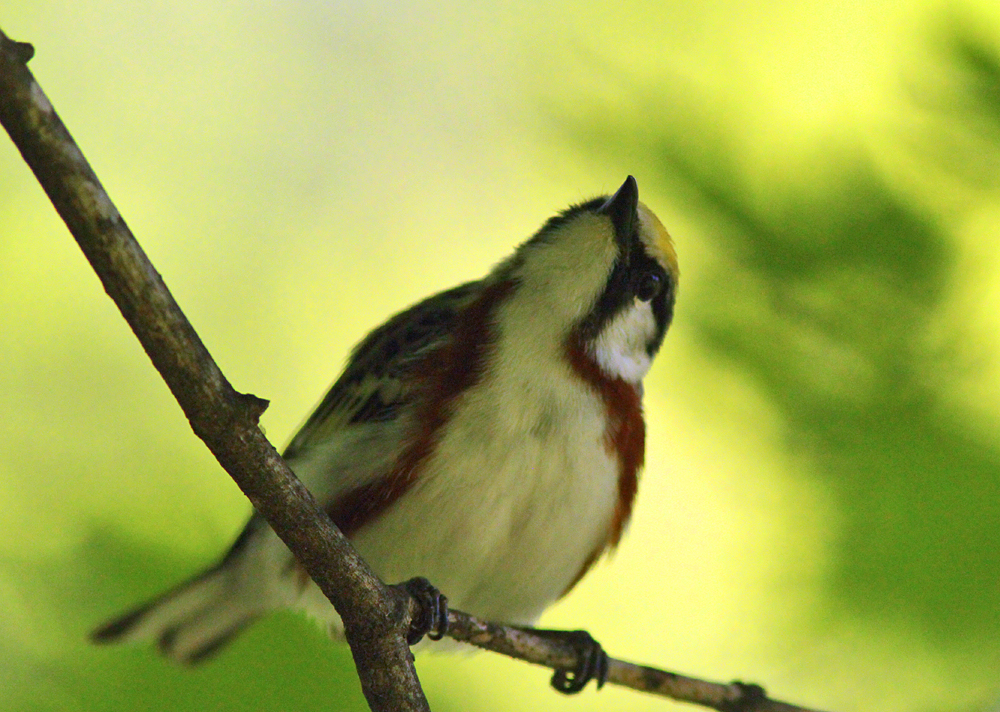 He was still singing away when I got home that evening.  It was gone the next morning though, which I guess make sense since I've never had one on territory down there.

Prothonotary is another bird that breeds locally, but one that I don't have good pics of.  Part of the reason is their penchant for the most mosquito-infested habitat possible.  The cold spring has the bugs behind making this individual tolerable to wait for, just a few miles from my house. 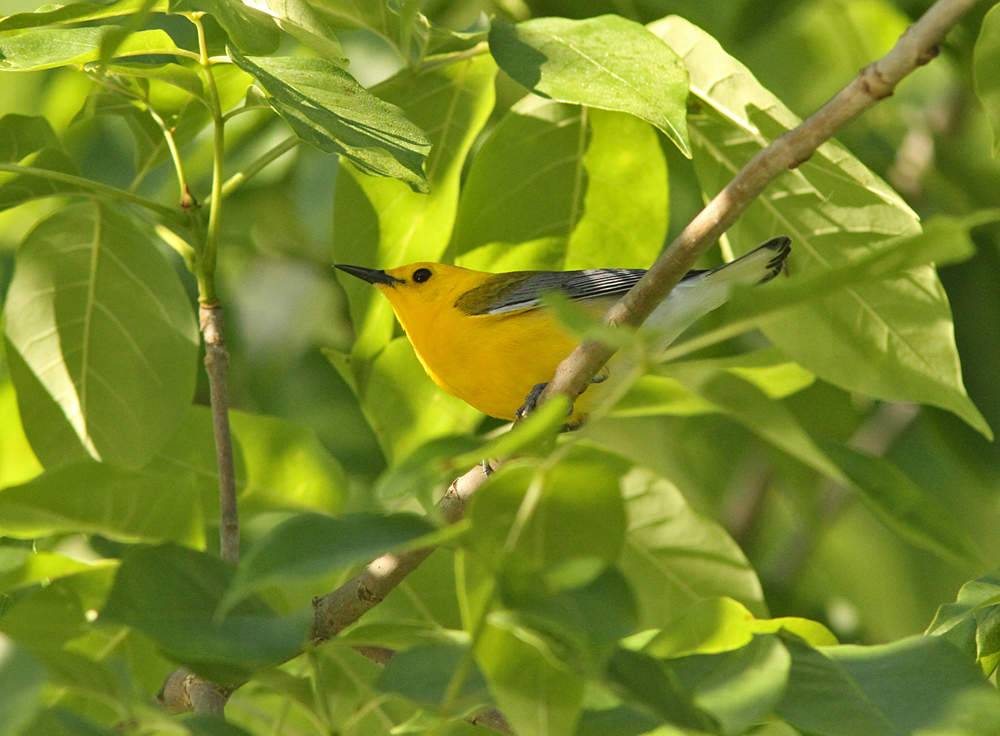 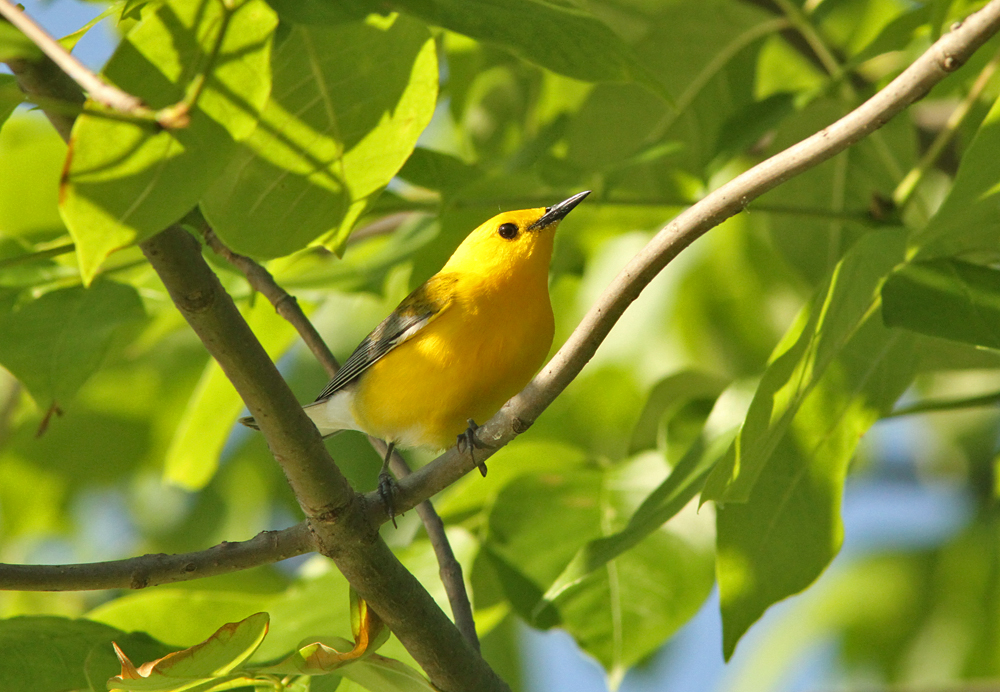 I think Indigo Buntings were singing at about our first 8 stops trying to find a Blue Grosbeak last week.  Right on cue there was one singing away at the Prothon spot. 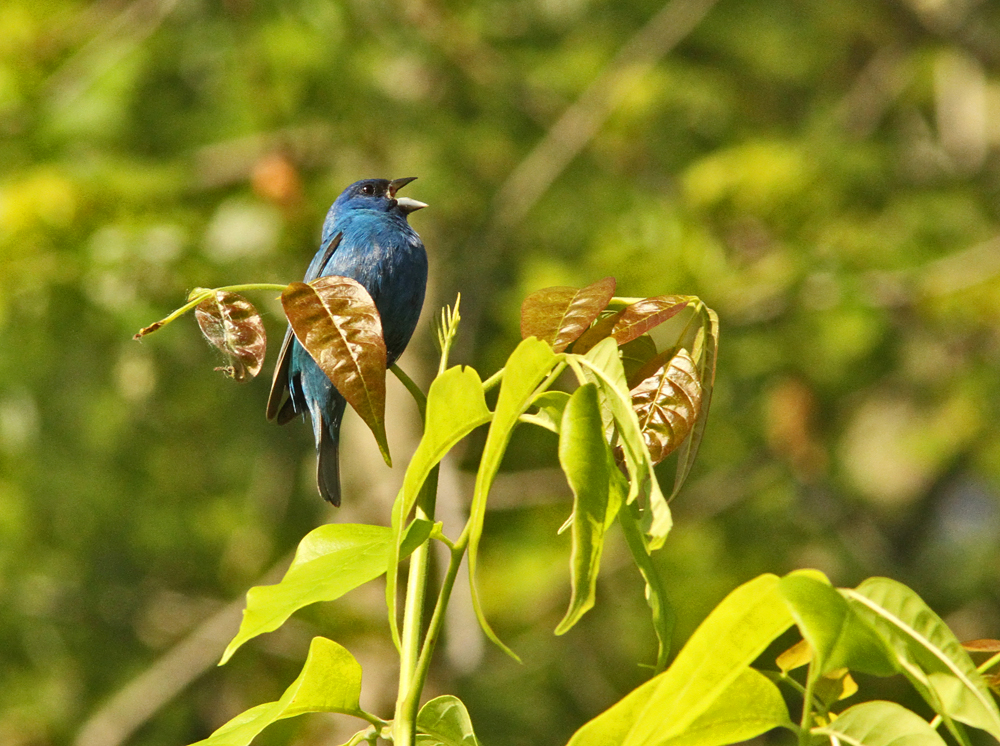 Plus another of what I'm calling Midland Clubtail.  They apparently don't have a problem with poison ivy. 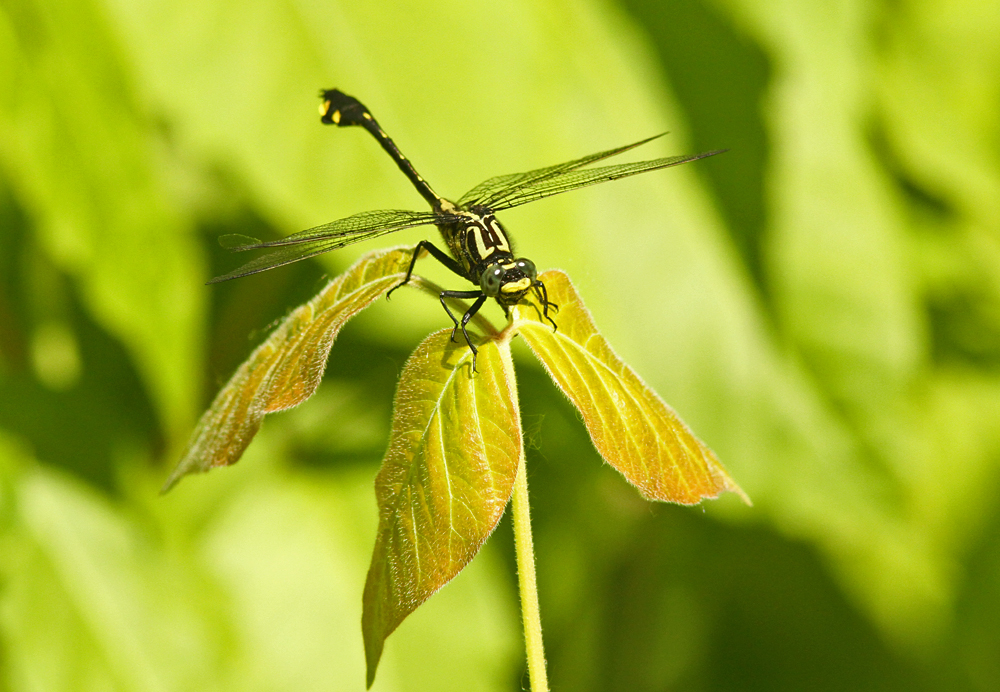 Odes in red, orange, and yellow

Rhoda and I spent most of the morning looking for Blue Grosbeak in the county.  We found a lot of Indigo Buntings, several Rose-breasted Grosbeaks, and a Blue-winged Warbler.  No Blue Grosbeak though.

There were Odes around though.  It's been a good year for Red Saddlebags, I caught my first one a few days ago so didn't swing at these.  Carolina Saddlebags looks very similar, apparently the black spots on the tip of the tail go all the way down in Carolina, in Red they just stay on top.  Currently Red Saddlebags outnumbers Black Saddlebags, though I'm sure the ratio will switch as the summer goes on. 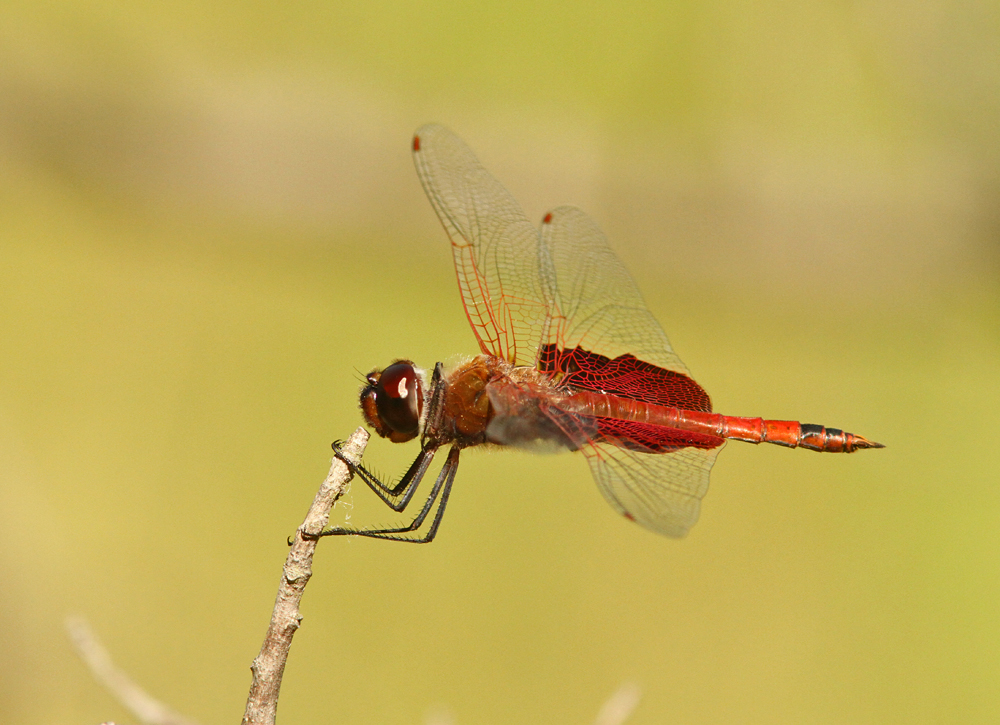 Calico Pennant was another red ode we had today, though I'd gotten better pics previously.

I wasn't sure what this orangish one was initially. 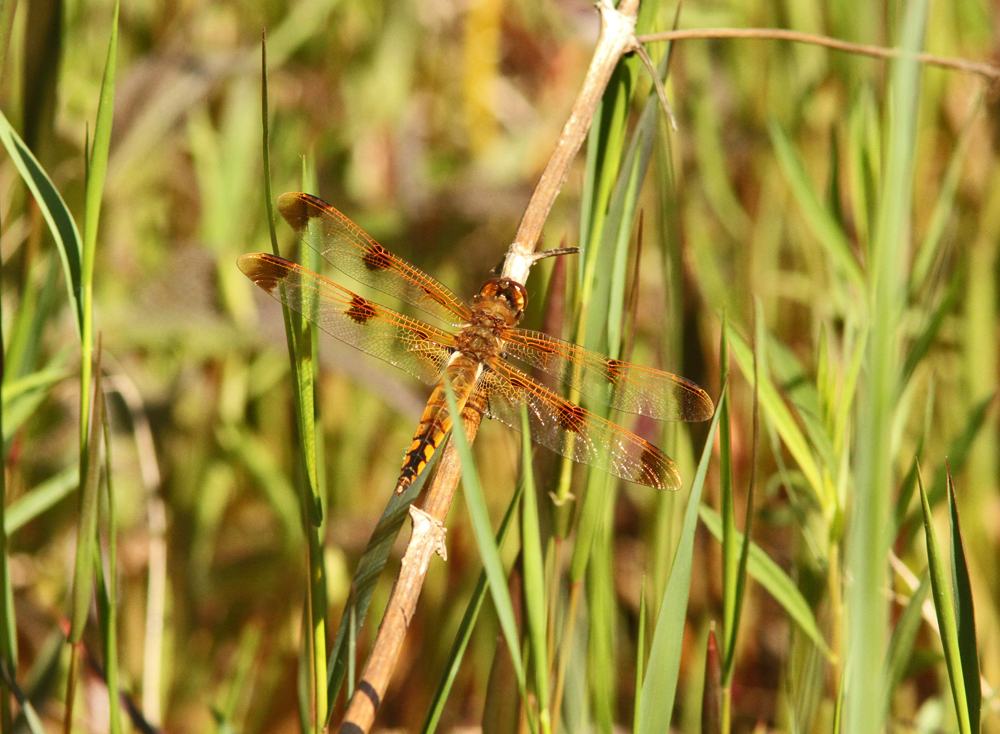 I was hoping it was a Painted Skimmer, but got a little concerned when I saw one that was paired up with a male 12-spotted Skimmer.  We took it back to the car to look it up.  Rhoda snapped these next two pics. 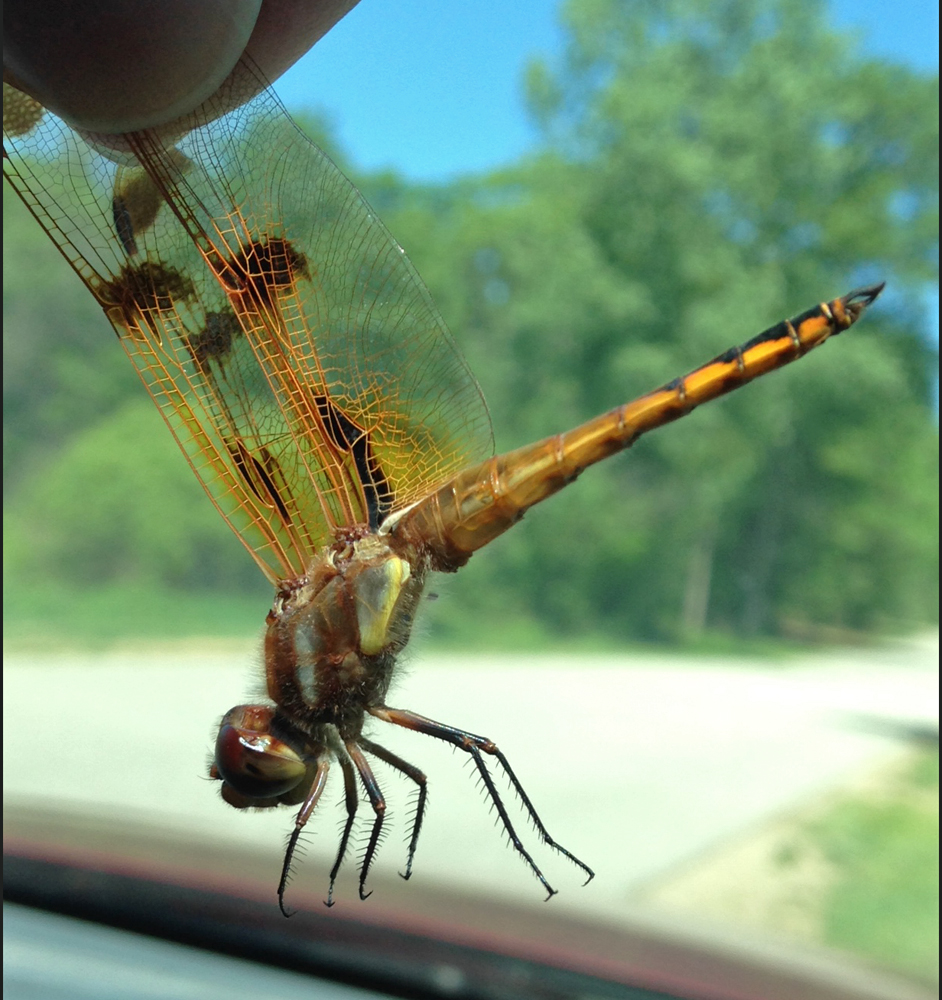 It was a Painted Skimmer.  Almost all the Michigan records are from SE Michigan.  The much more common orange ode locally this time of year is Halloween Pennant.

Here's the female 12-Spotted, you can see why the male grabbed the wrong one. 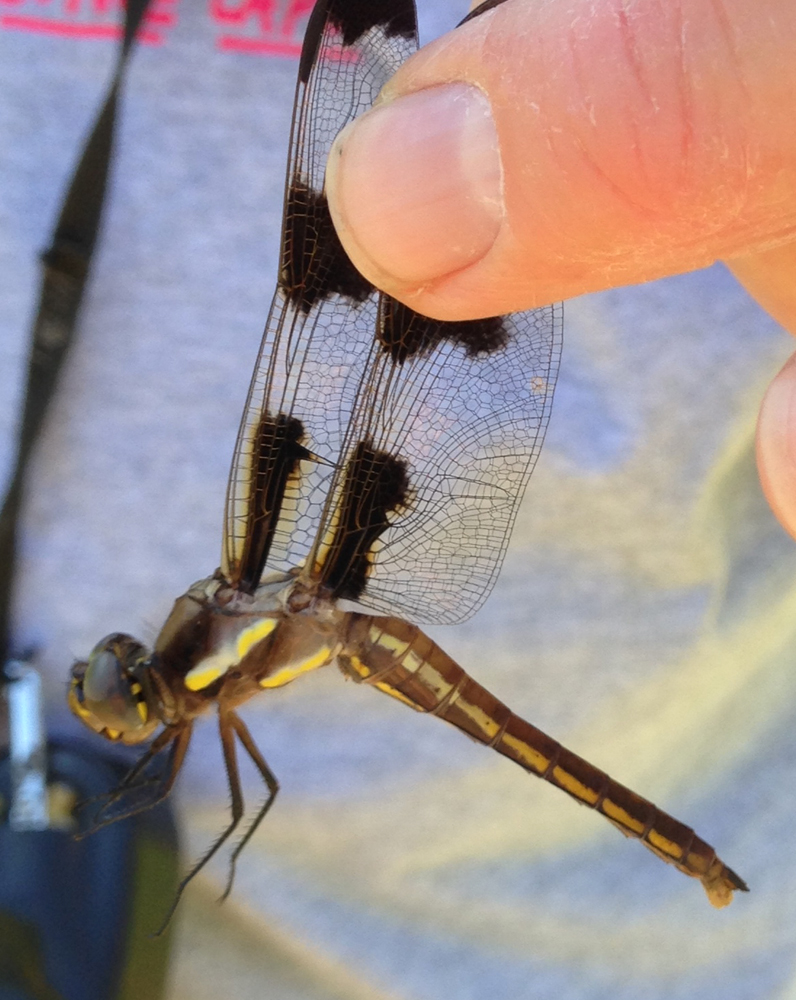 Finally a clubtail that I didn't manage to net.  I'm pretty sure it's Midland Clubtail, though it's a huge family and they're all pretty similar. 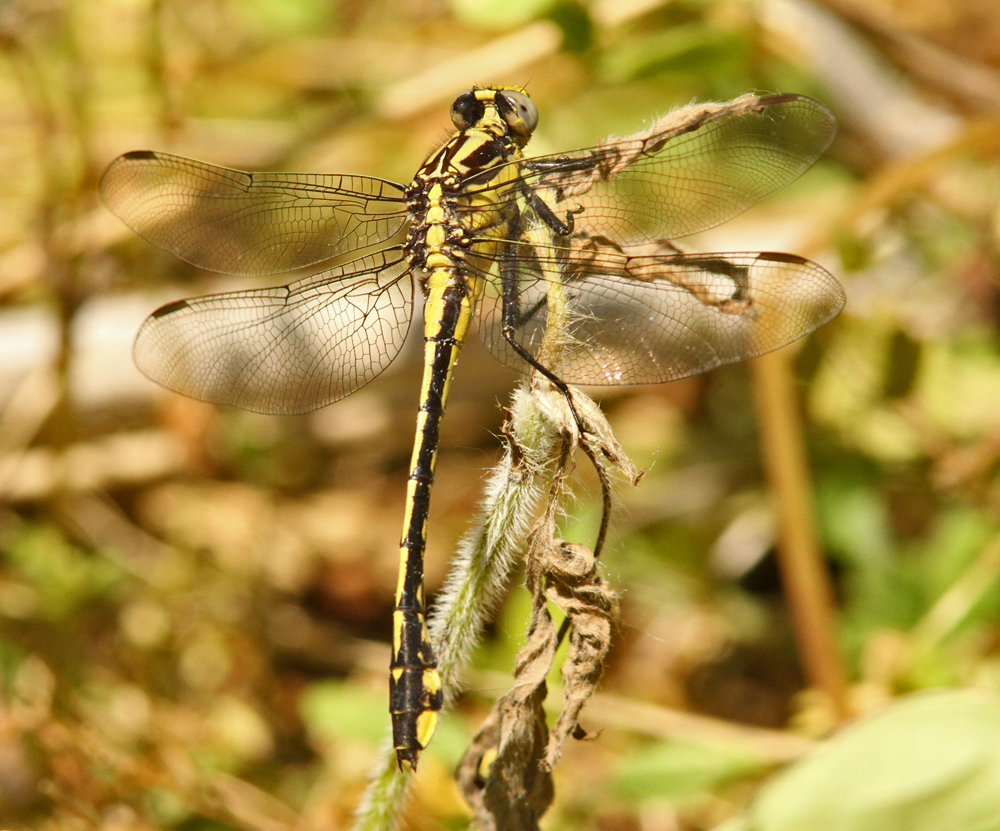