Strong S winds aren't really what one might predict would bring northern owls south, but who's going to argue with results.

Tim had a Snowy Owl land at Tiscornia this morning, the first one I've had at the park, #249 for Tiscornia for me if my spreadsheet is right. 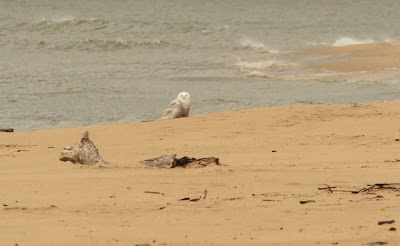 It just sat there for the 15 minutes I managed before church.  I saw all of 7 species in that time, though the 7th was this Thayer's type gull: 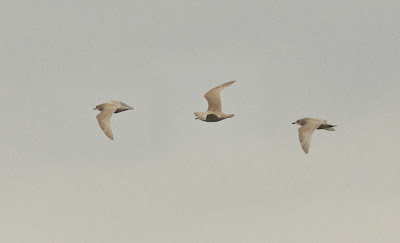 Note the venetian blind primaries, and tail and secondaries darker than the rest of the bird.  There are darker individuals though.

Continuing the theme of sub-par pics of above-average birds, here's the Harlequin Duck that was found earlier in the week in New Buffalo. 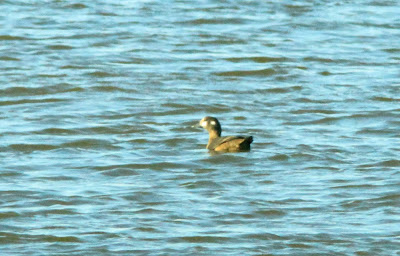 Sabine's Gull is a bird I've been anticipating for a long time.  I definitely didn't expect it would take nearly a decade over here to see one though.  Their peak time is about 3rd or 4th week of September based on what Indiana gets so they had pretty much passed off the radar for the year.  This morning with decent winds I was mainly just hoping for a Kittiwake or a Harlequin Duck.  Imagine my surprise when this juvenile flew into my binocular view... 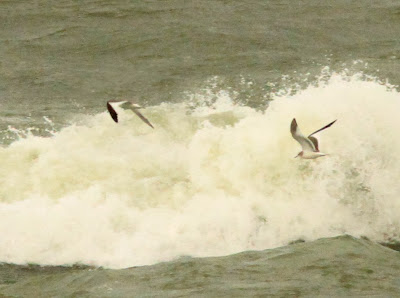 Never having seen one before I was surprised by just how great the contrast was between the black leading edge and the white trailing edge, kind of an inverse Bonaparte's pattern. 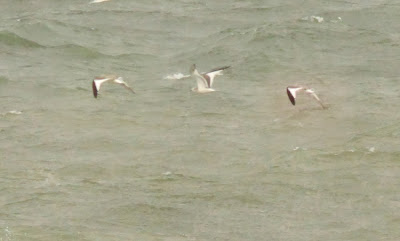 I've made over 700 visits to Tiscornia, this was my 16th species of gull here.  Eighteen or nineteen have been seen here.  You can just make the bird out about 5-600 yards from the overlook flying right, towards the lighthouse. 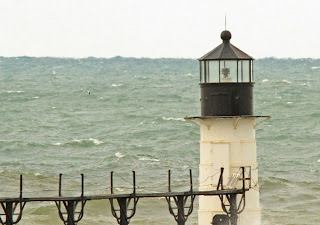 Closer to a Gos

Credit to Warren Whaley on this bird.  I nearly became the sacrificial birder when need for sleep wore out over my hopes for new birds after a few hours at Tiscornia.  Warren, Tim, Mike Mahler and I were up on the dune talking when Warren pointed to a hawk coasting by already on top of us as I was waiting for a break in the conversation to leave.  My naked eye impression based on large size, broad wings, and heavily marked underparts was of a Rough-legged.  Then my eyes focused on an immature accipiter and I automatically said "Coop."  At least 2 of the other 3 said after raising their bins, "Gos."  I honestly thought they were joking and didn't bring the camera to bear until it was well past.  If I'd looked closer I'd probably have seen the strong eyestripe, pale upperwing coverts, amidst any number of other things, but on no sleep I failed that test (not the first time that's happened).  Oh well.

The secondaries are very broad yet the wingtips are pointed.  The tail is broad.  You can get a vague sense of the checkering of the upperwing on the 2nd to left image, a sense of the pale upperwing coverts (sort of similar to what Redtails and sometimes red-shoulders show) on the 2nd from the right.  I think this is only the 6th Gos I've ever seen and the 2nd closest.  I think I have a little better feel for the bird now though.
I tried a few spots to the south trying to intercept it again but didn't find it.

Rhoda and I later walked the breakwall at New Buffalo looking for Purple Sandpiper.  We didn't see any but a couple times medium-sized calidrid sandpipers did flush, the much more common Dunlin.  Two at the very end were fairly cooperative.

This bird was noticeably larger than the other, I'm presuming adult vs first winter (but I suppose it could be a sex difference as well) 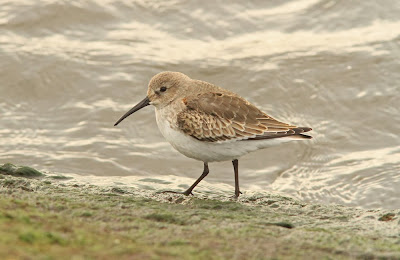 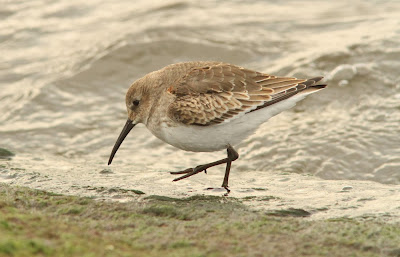 The other was slightly shorter billed, noticeably lighter in weight and with less retained rufous in the scapulars 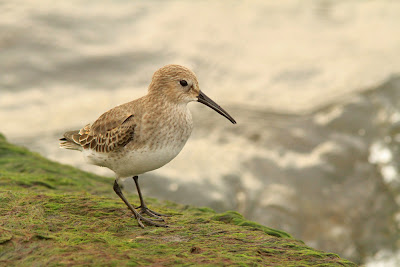 I actually should get out again tomorrow (2 days in a row!), having scored 2 yearbirds (the other being Tundra Swan ironically at 2 different locations), perhaps I can build on the momentum.
Posted by Matt at 4:26 PM No comments: