I grew up in northern Midland Co and towards the end of high school started exploring the woods behind the house.  I really under-birded it, but at the time with no internet and no mentors didn't really have a clue as to what to look for when.  Internet access in college was pretty helpful though.

In late May of 98 I was cutting through a section of woods which was 2nd growth forest taking over an orchard with some scattered large white and (I think) Scotch pines when I came across a gray shape resting on a branch.  I didn't see it until I was probably 3 feet away.  My initial impression was that it was the stupidest squirrel in the history of the world and I'd just about decided to backhand it right off the branch on general principle when I realized it was feathered.  I backed up pretty quickly and went back inside for the camera, (this is a digital photo of the photo)... 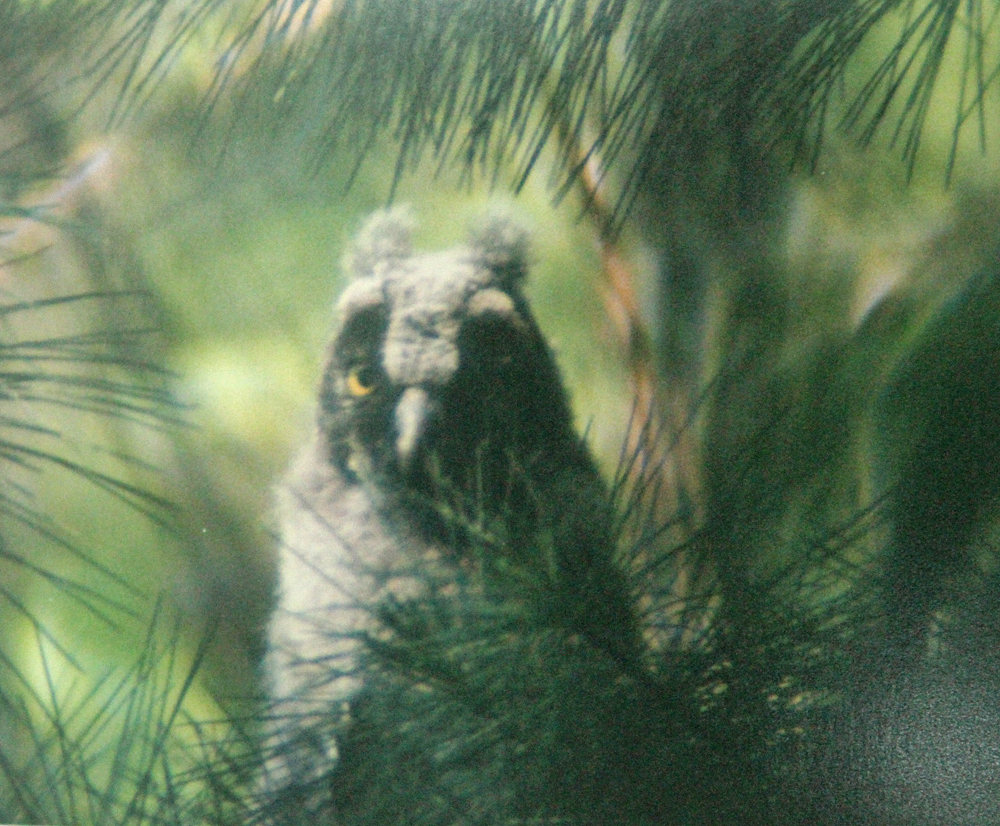 The camera even at the time was at least 25 years old so the image quality isn't awesome to say the least.

I found the adults the next day, they were a lot more cautious and flew pretty quickly despite the fact that the "lens" I was using was an equally old Swift telescope. 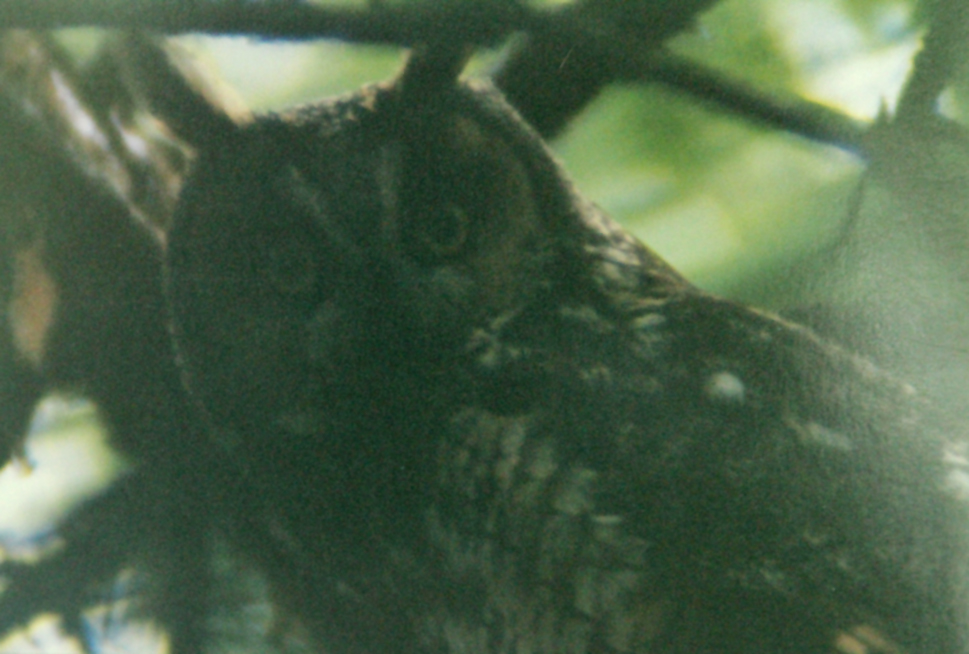 Somewhere in my childhood house there's a photo of a Varied Thrush we had coming into our feeders one winter; I have no idea when/if I'll relocate it though.
Posted by Matt at 12:41 AM No comments:

If June was for skimmers then July is apparently for clubtails.

A couple days ago Rhoda found Dragonhunter in an inlet off Lake Chapin.  We kayaked out yesterday hoping to net one.  There was a nice species diversity there, with Cyrano Darner, River Cruiser, and 3 species of clubtails among others.  The only one we netted yesterday was Black-shouldered Spinyleg.  One landed on my head at one point; they seemed to like to fly out from the trees to land on horizontal surfaces close to the water's surface. 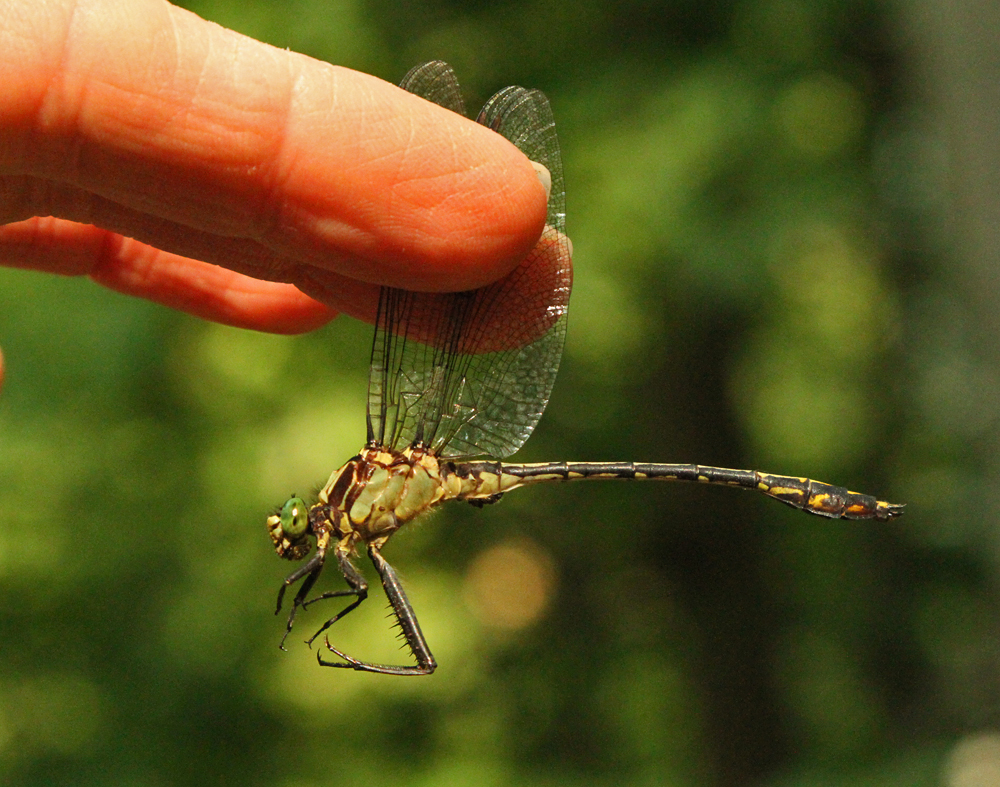 It's fairly large, almost 6cm long with huge hind legs (apparently they prey on large insects up to medium sized dragonflies).  It looks like a kangaroo.

I glimpsed this next one but missed it yesterday.  When I returned today it was back on the same log.  It was so old it actually didn't bother flying the first time I swept the net an inch or 2 over it.  I had to practically hit it with the rim of the net on the 2nd swing. 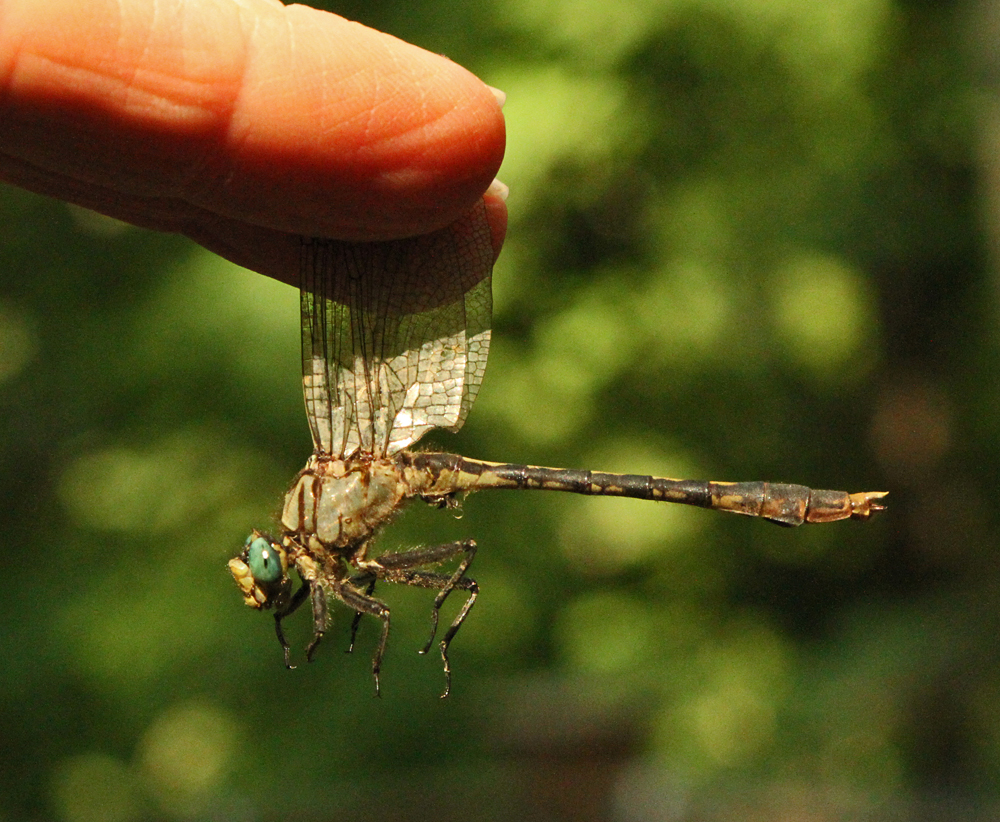 It's actually somewhat similarly patterned to the larger spinyleg in that the rear areas of the thorax (body) are fairly lightly patterned.  The arrangement of the partial and full stripes makes it a Unicorn Clubtail.  I'm not sure why it's named that way though.

And finally the bad M-Fer that drew Rhoda back the same time it did me today.  Dragonhunter.  She nabbed it out of the air with a well-timed swing.  All these pics are hers. 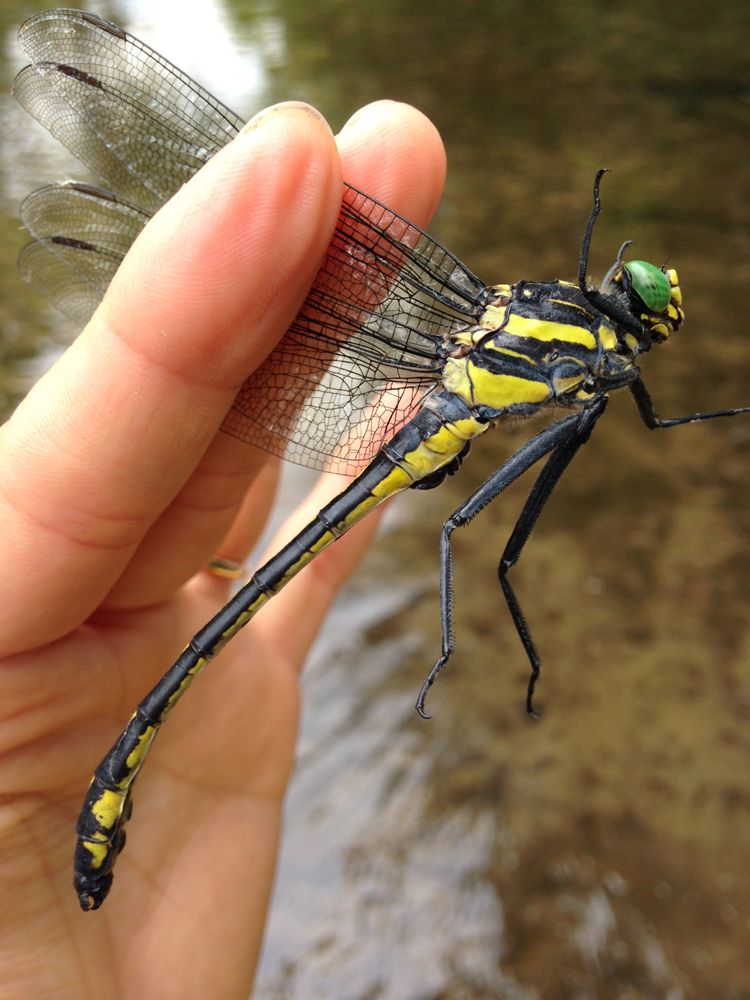 It's a freaking monster, by far the biggest ode I've handled. 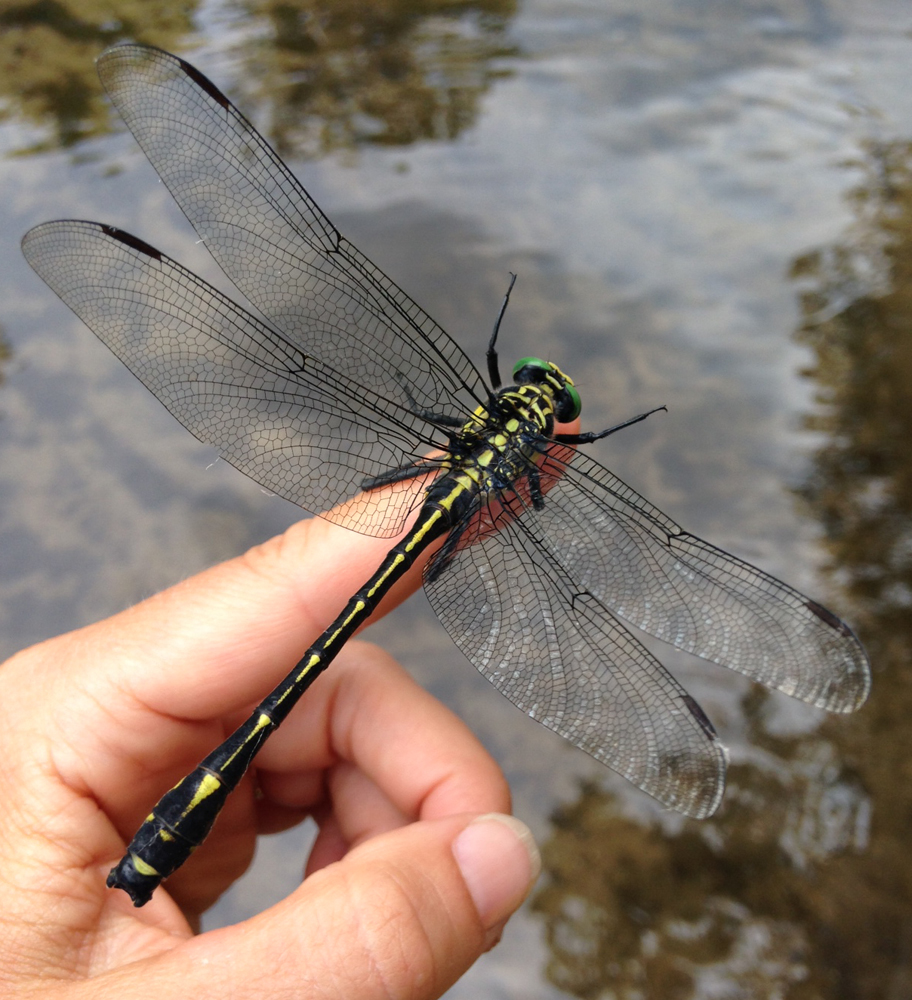 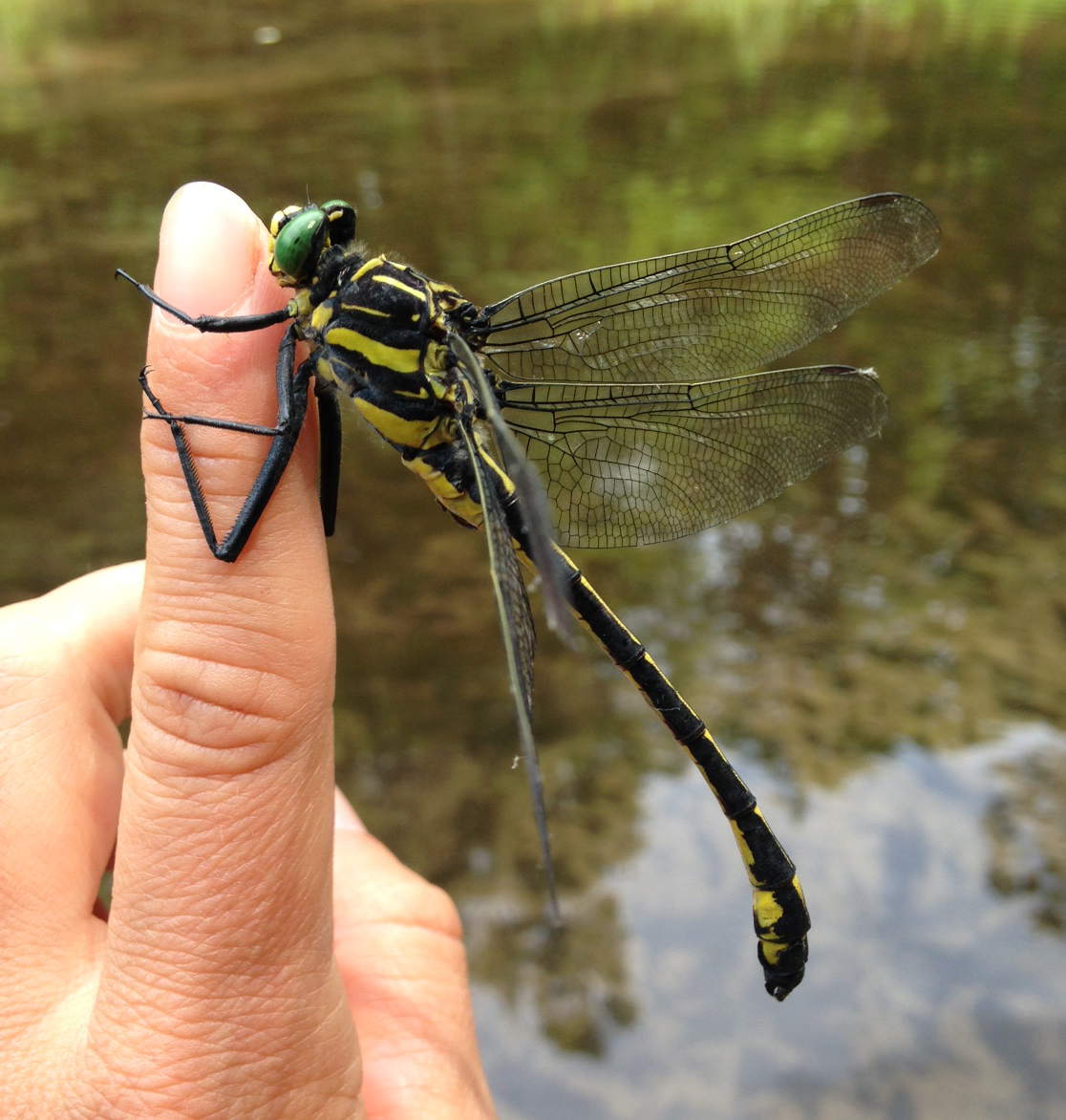 I'm not sure where a person goes from here, but it was cool.  I have been to the beach about 4 times in the last week, but so far just willets.  I bet there's more odes out there waiting for discovery though.
Posted by Matt at 4:52 PM No comments:

I'll be curious to see how I compare the difficulty of identifying Odes with some of the harder species of birds in a few years after more experience.  I'm still at the lug-around-a-Peterson-in-spring-migration phase of odes.  My family's gone camping so I spent most of the day looking for dragonflies.

The two red Trameas are really really similar.  Earlier in the year I caught a Red Saddlebags.  My impression in the past has been that Carolina gets more likely later in the season and I'd been ignoring them for a few weeks.  It seems like they've gotten more common again. 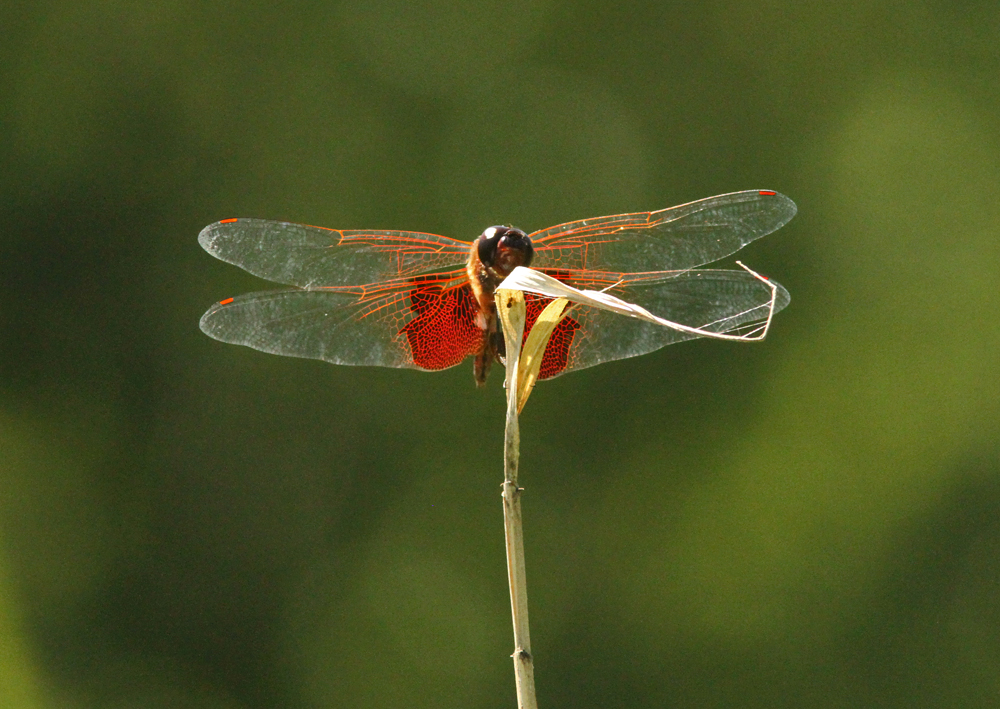 ID points that (I think) are supportive of Carolina are the dark frons (nose), quite small clear patch at the base of the hindwing, and (again I think), how far down the black at the end of the abdomen reaches.  It took a lot of effort to eventually ambush one. 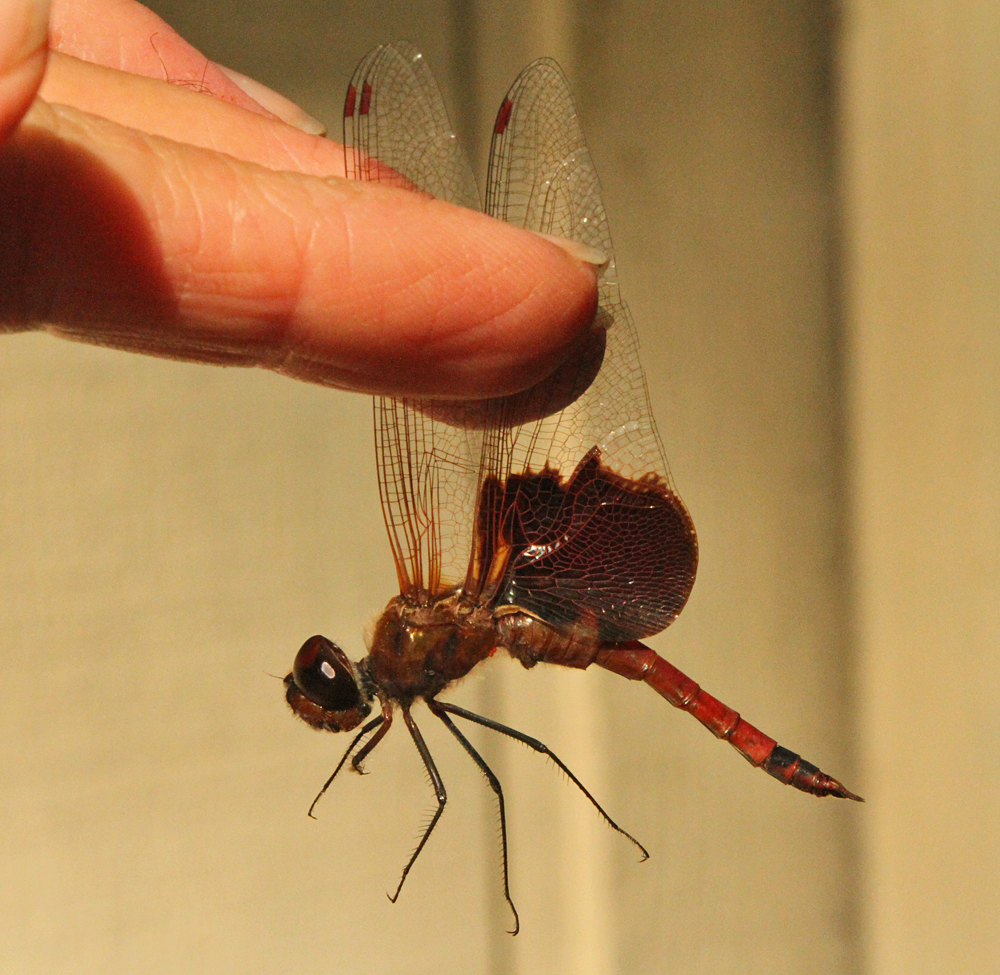 This is my best pic so far of Comet Darner.  They don't land.  It was hard to get even this pic.  They're not common on this side of the state. 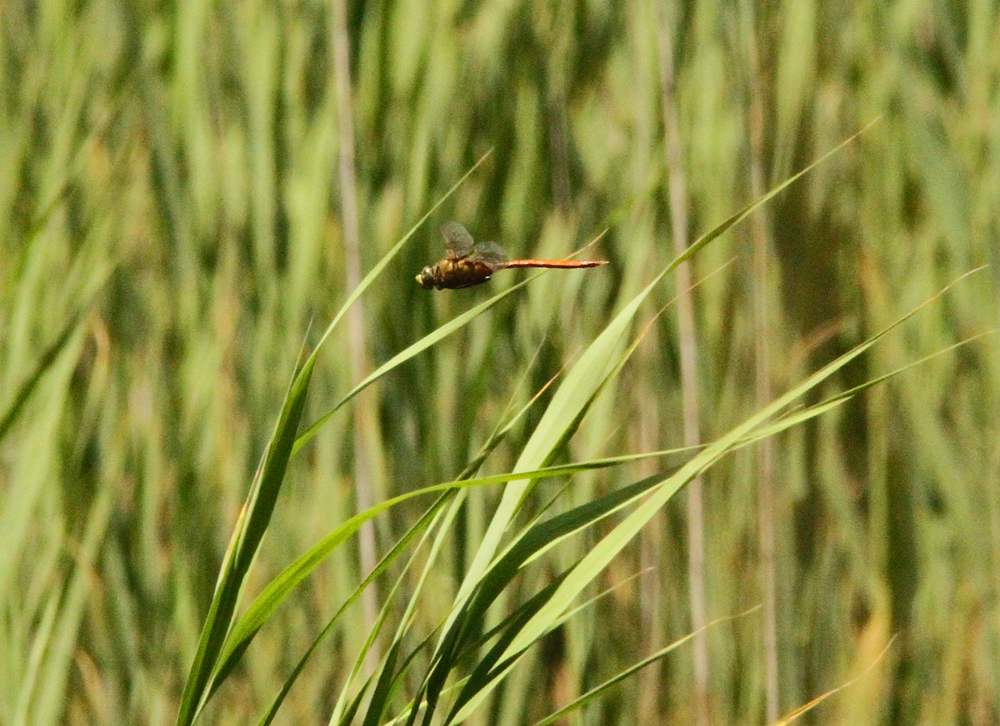 I think the above pic is good enough for ID purposes, they were really orange at close range.  Common Green Darner females (below) could maybe look similar, but they're brown, not orange 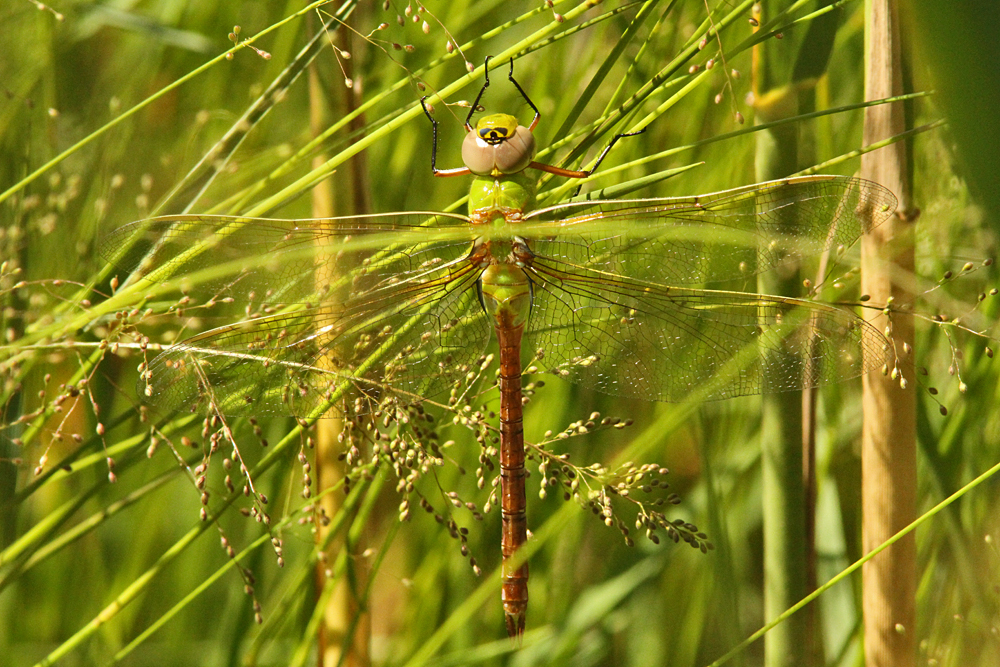 I spent about 3 hours trying to stalk or ambush the Comet and this next creature. 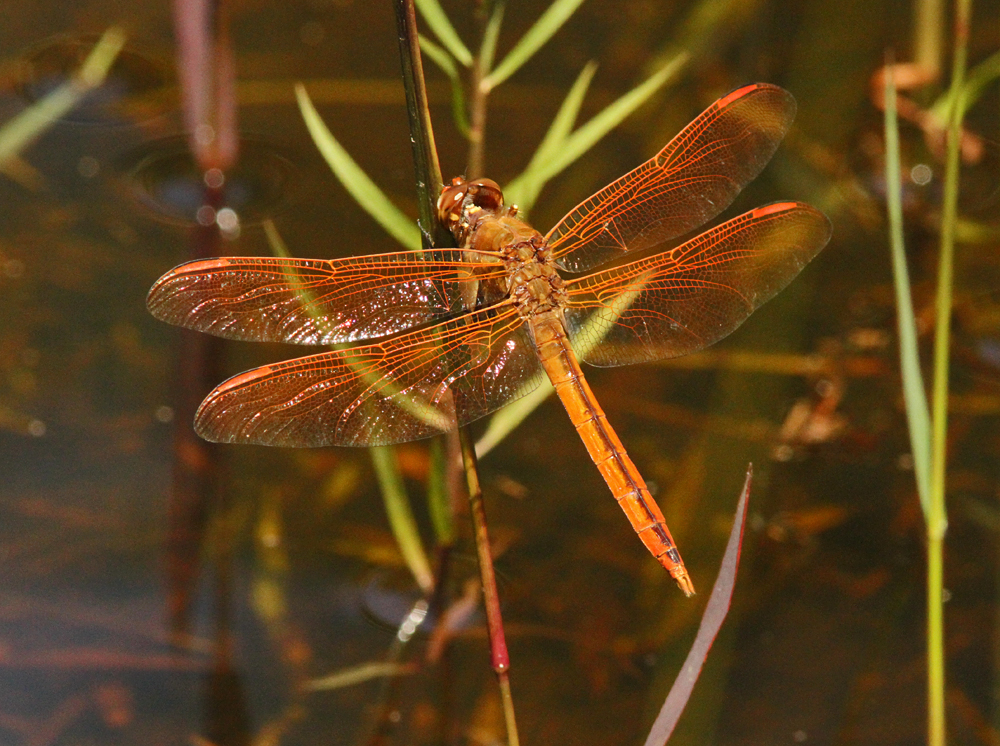 This Golden-winged Skimmer flew just as I started my net swing.  It's probably the best picture of one ever taken in the state of Michigan.

Most meadowhawks are impossible to identify when young.  Variegated is an exception to the rule. 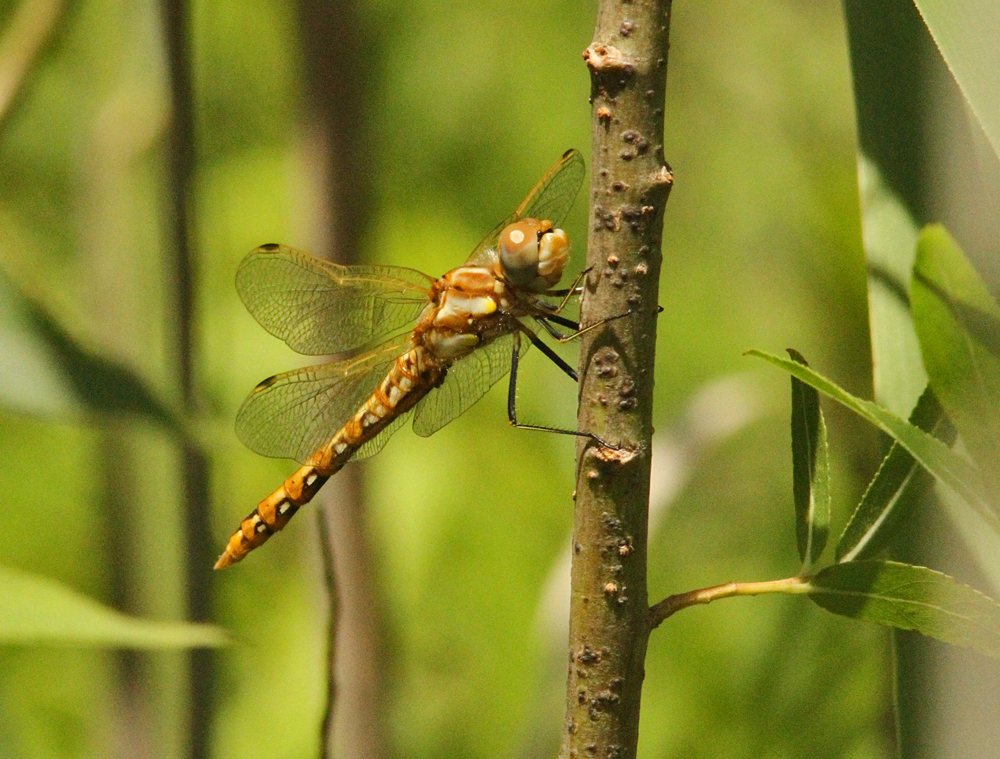 I mostly ignore the damselflies unless they're a tandem pair.  This Amber-winged Spreadwing was large enough to catch my eye though, a lifer for me. 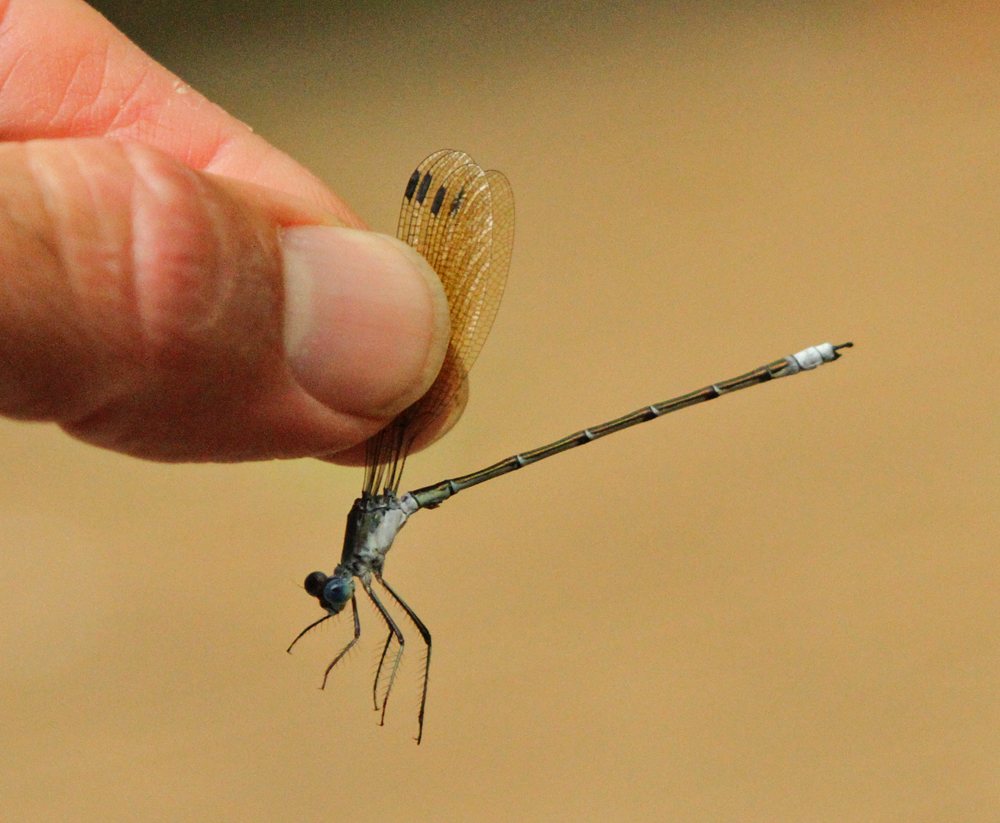 Finally a clubtail that I cannot identify.  It's a teneral (recently emerged) female that's 55mm in length.  Clubtails generally have 4 stripes on the thorax.  On this one they're broad and merge into 2.  It does not (to my interpretation) have a T5 stripe at the very end of the thorax which Ashy Clubtail is supposed to have but otherwise is probably closest to it. 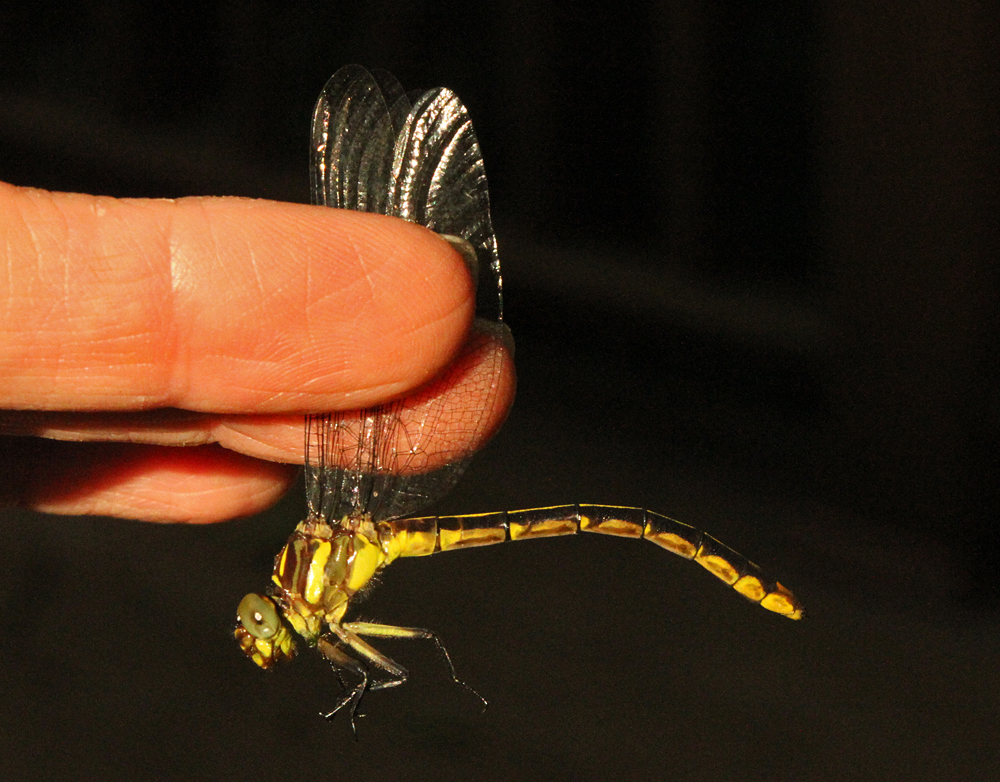 There's a lot of yellow along the sides of the abdomen, more than any other clubtail I've found. 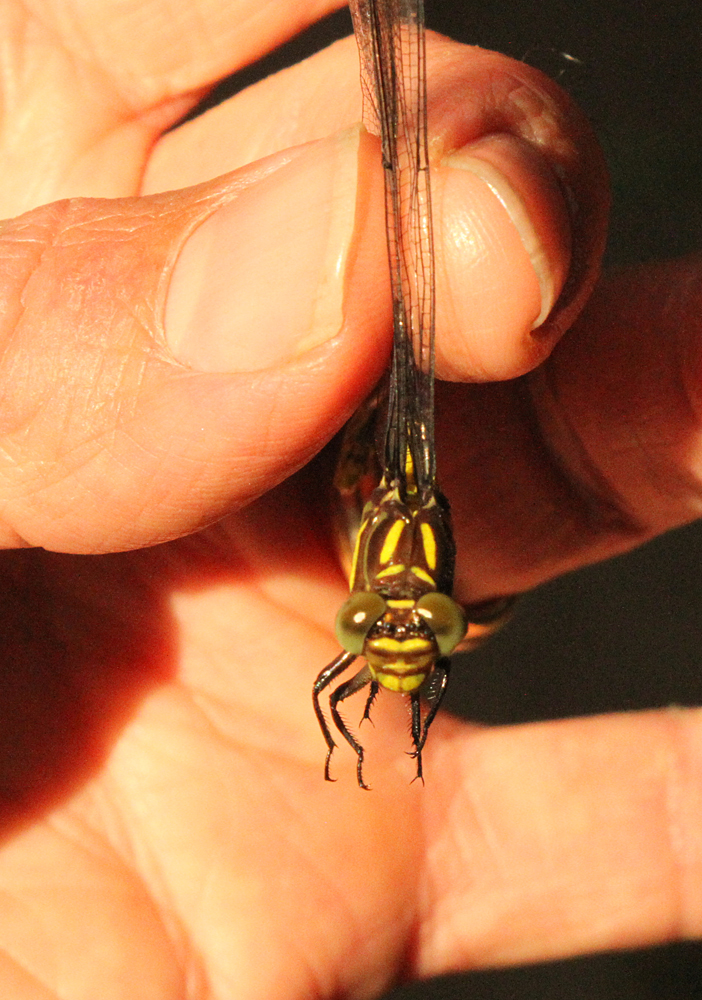 The broad blurry bit of yellow across S9 seems fairly unique.  It doesn't have much of a club. 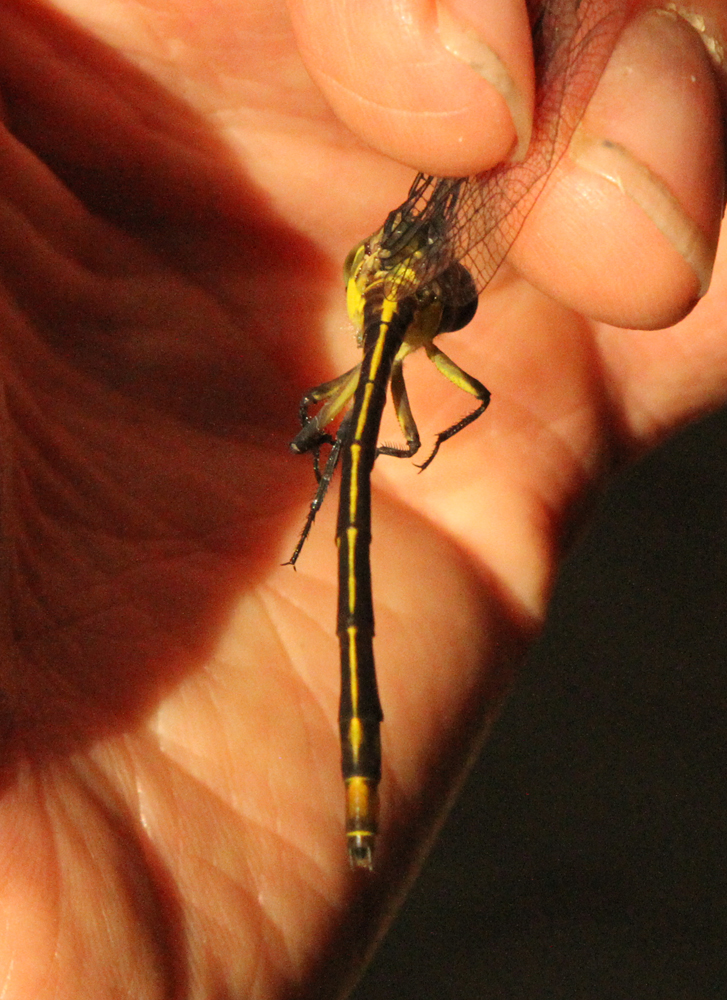