I haven't had a ton of luck with photographing the Snowy Owl incursion.  Rhoda let me know earlier in the week though that birds were visible in the Scottdale plains. 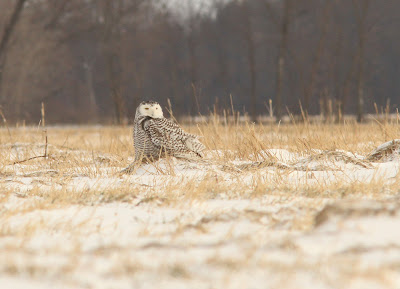 Snowy Owls aren't the only raptors there. 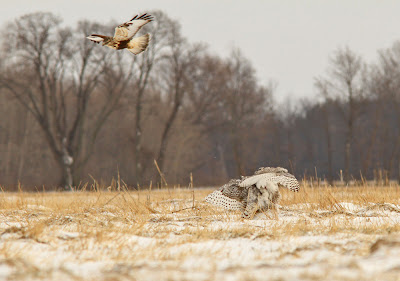 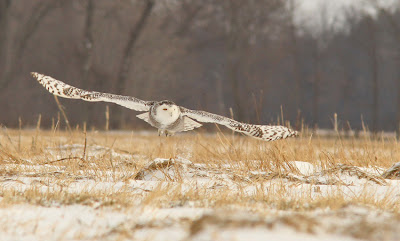 It flew up to a cross beam where I could drive much closer, maybe should have taken a shot of a nice grassy knoll in similar light and photo-shopped in the owl... 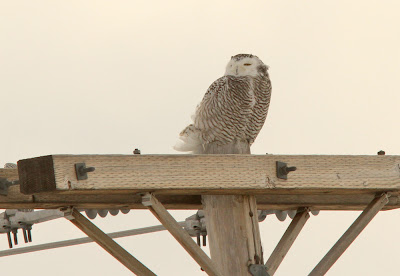 Hopefully I'll get some more Snowy shots, they're a fun target no doubt.
Posted by Matt at 4:57 PM No comments: 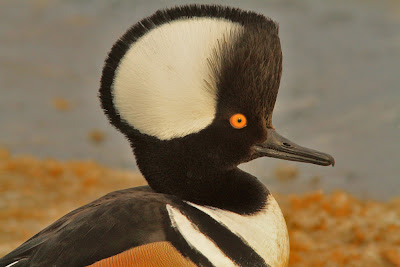 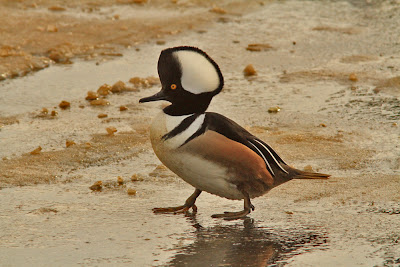 Today was the Berrien Springs CBC which covers St Joe.  Despite windy (and very bright) overnight conditions we had the best night of owling I've been a part of with double digit owls, mostly screech, but also a Great Horned or two.  It was bright enough that we saw probably a third of them fly in or away, the last of which was just as it was getting light.  This pic is hand held at 1/25th of a second (and then post-processed brighter) 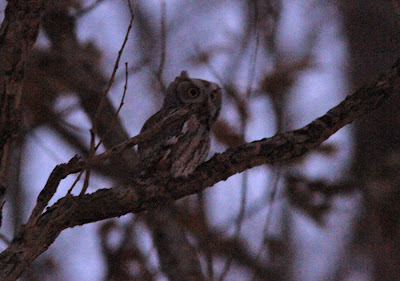 I tried the flash which allowed me to push the shutter all the way up to 1/50th.  This was the first time I've had to try to fix red-eye on a bird. 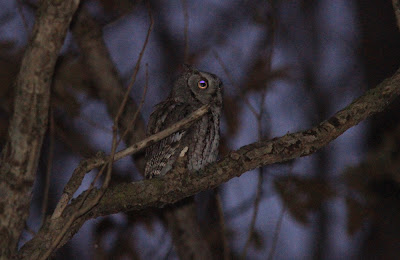 The Snowy irruption has been well documented.  I've yet to run across a close bird (or really that many birds at all; I've driven the Linco/Scottdale/Totzke section several times and seen none there despite others' success).
This one was at New Buffalo sometime last week. 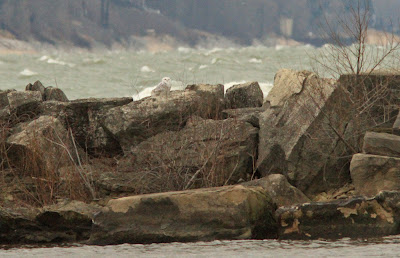 I think on that same trip we had a Red-shouldered tee up nicely along the edge of some random parking lot. 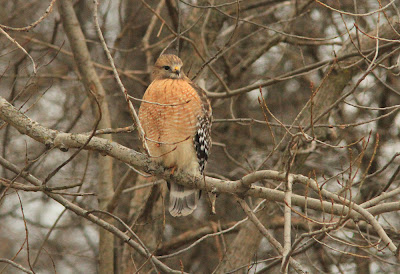 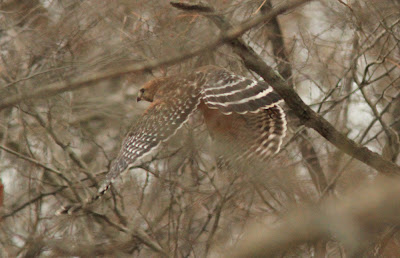 Finally a young Harrier somewhere in the south county plains 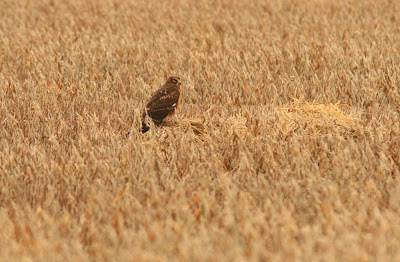 I haven't had a chance to get out much of late so 5 degree weather this morning was a bit of a shock.  It made for some interesting lighting effects at the beach with very cold dry air getting pushed over the 35 degree lake by brisk South wind.  There was a decent amount of, well, steam is probably the wrong word, rising off the water muting the morning light. 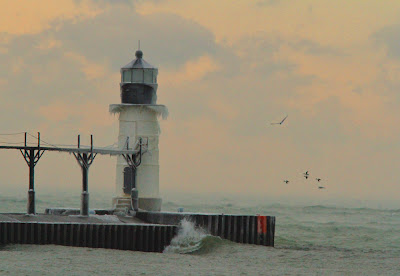 A group of goldeneye on top and mergs on the bottom. 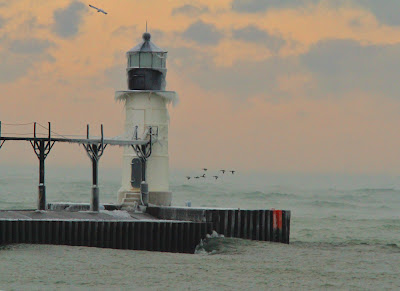 This loon is about a quarter mile less distant and maybe gives more an impression of the water vapor. 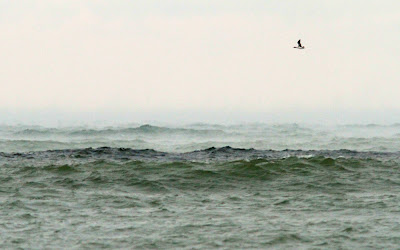 Continuing the artistic theme, here's a flicker montage that I shot through the kitchen window earlier last week during snow squall, 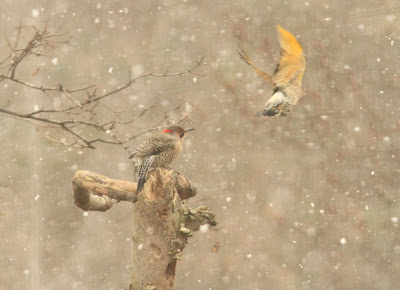 As well as a bluebird from Warren Woods a couple weeks ago that I probably shouldn't have montaged (though the branch is too thick for it to be a quality portrait). 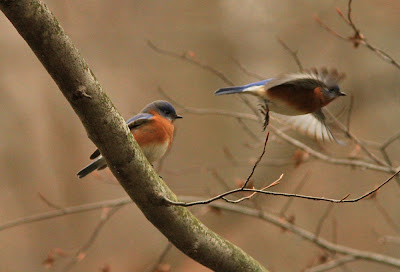 We were pretty close to chasing the Iowa Ross's Gull yesterday and if it'd been seen on Thursday we would have.  It wasn't so we didn't.  Ah well.  We found Ross's Geese instead. 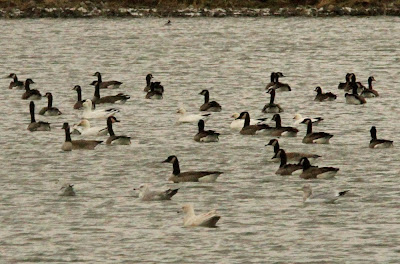 They were mixed up in the large Canada Goose flock.  Their body size is less than the young Glaucous Gull in the foreground.  There's one white morph Snow Goose as well.  After not a whole lot of time all the gulls on the berm flushed (we didn't see the responsible raptor), and the white geese followed them (the Canadas were unimpressed).

The Snow is obviously the larger upper left bird.  The bird trailing it associated more with it than with the other 5 when they uncertainly circled the ponds (the flock split a few times).  It seems like it might be just a bit bigger than the other birds and when in the water through the scope may have had a bit less vertical a bill base. 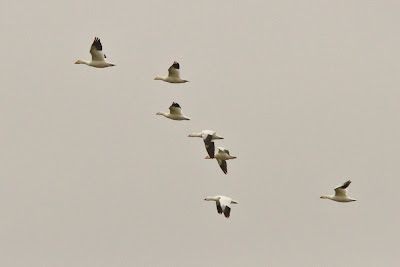 The bottom 5 birds had consistently vertical bill bases.  One is a first year bird with some dusky feathering in the lore and face. 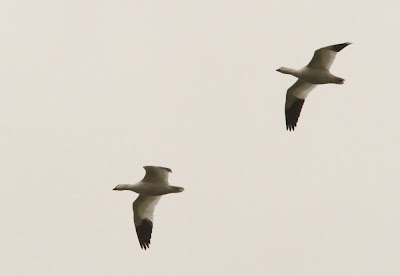 This afternoon I made a few central and north county stops with the highlight being 10 White-fronted Geese at the LMC ponds.  I've actually seen White-fronted on fewer occasions than Ross's in the county. 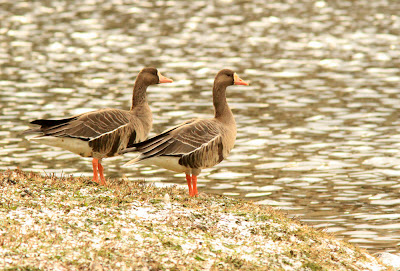 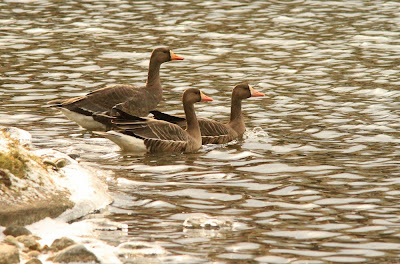 Here's the other 7, they were segregated at the other end of the pond

Finally a mega-crop record shot of 2 Harlequins in the New Buffalo harbor from yesterday. 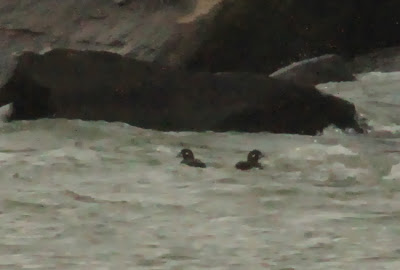 The White-fronts were 271 for the county for me, my personal best.  Don't be impressed though, that'll be good for at best second (and quite possibly 3rd) place this year!
Posted by Matt at 5:15 PM No comments: