Every birder knows all about warblerneck.  And trust me, in the tropics it's more than warblerneck; it's flycatcherneck, trogonneck, cotinganeck, notsurewhathatisneck, OmyGoditsa...ohnevermindneck, you get the picture.  At dawn on the 2nd day of the tour we cut that right out of the equation by mounting the ~180 steps to the top of the Rainforest Discovery Center Canopy Tower.

Why were we there at dawn?  Because Blue Cotingas don't really like direct sun any more than we do. 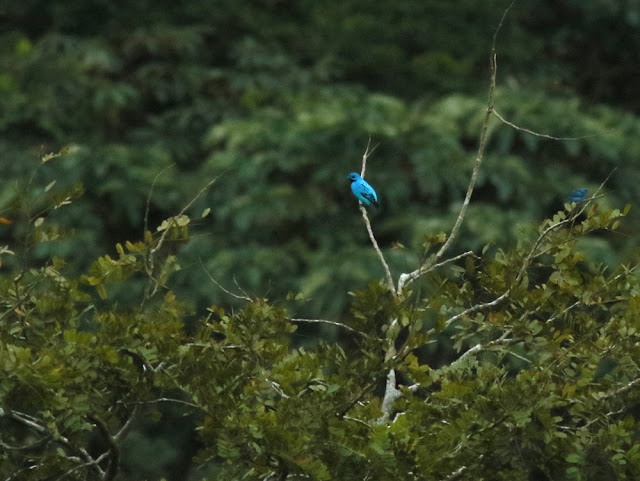 They do tend to stick in the very tops of the trees though, and are utterly silent, so the best way to see  one is on an exposed snag at daybreak.  If you look carefully, there's a male Blue Dacnis (a type of small tanager type bird to the right of the cotinga). 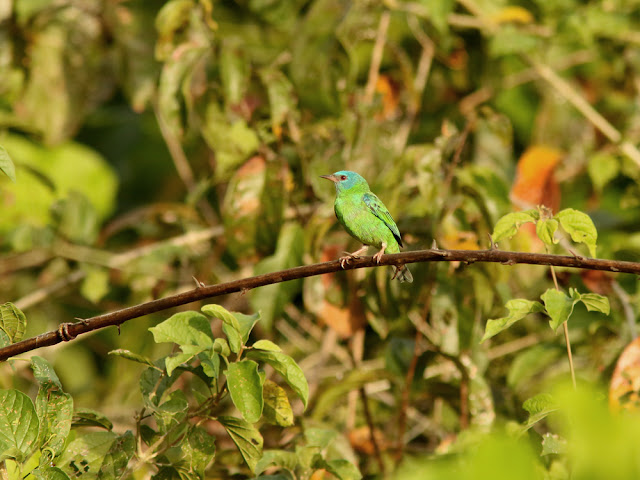 Pigeons and parrots were flying about, moving from roosts to their feeding areas.  We saw more Pale-bellied as well as a few Scaled Pigeons though they didn't come very close.  These are Red-lored Parrots, the dominant Amazon in Panama 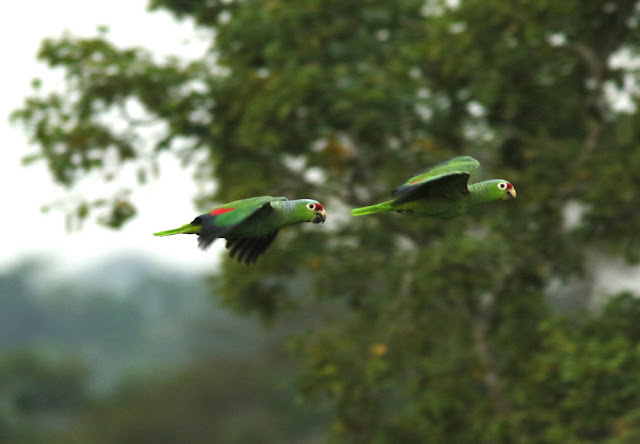 We saw a couple groups of Mealy Parrots distantly, in addition to a few Blue-hooded Parrots, a new species for most if not all of us.

I'd expected the Blue-hooded's to be a lot more common than they turned out to be, probably based on eBird bar graphs from people who could recognize the flight calls.

White-shouldered Tanagers are very common birds of the upper level of forest in Panama, we saw several small groups working the treetops. 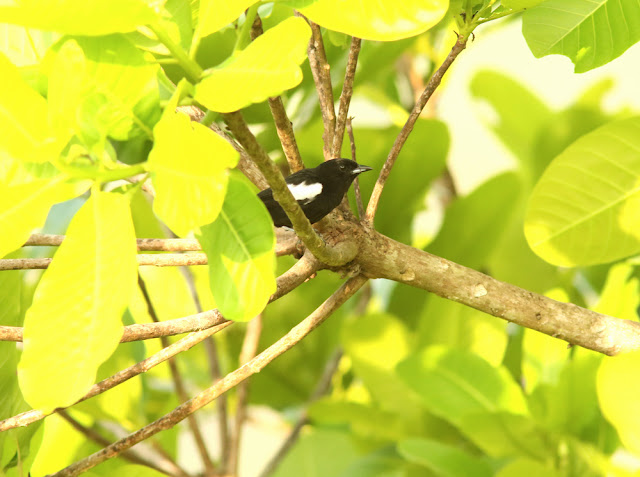 We worked hard trying to spot some of the treetop passerines.  Green Shrike-vireos called frequently but we couldn't track one down.  Brown-capped Tyrannulet is another bird you hear frequently in central Panama, this was one of only two we saw the entire trip. 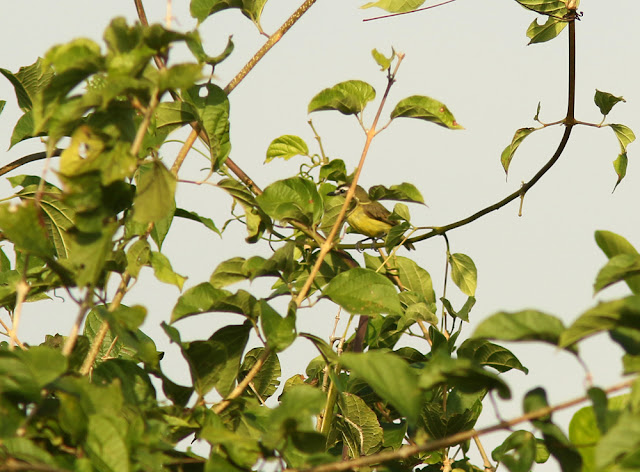 A Moustached Antwren (picture a winter wren plumaged like a female Black-and-white Warbler foraging like a gnatcatcher on speed) flitted past, but a Slate-colored Grosbeak remained unseen in the distance.

We enjoyed look-down views of a Violaceous Trogon. 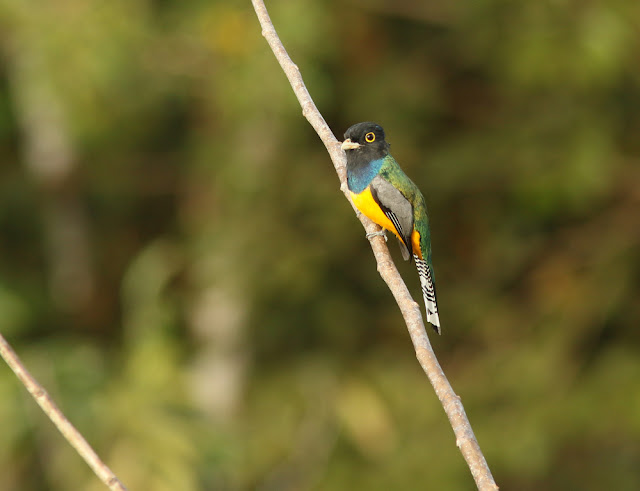 As the Sun started to really get hot, raptors started appearing.  This is a Double-toothed Kite. 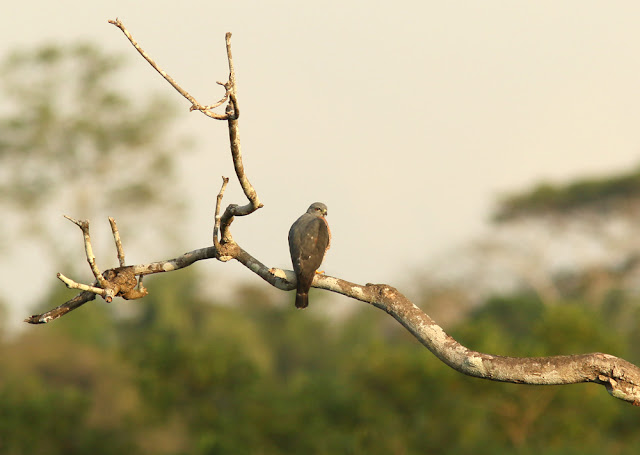 We had a Gray-headed Kite do its best hawk-eagle impression distantly and then had a Short-tailed Hawk fly by. 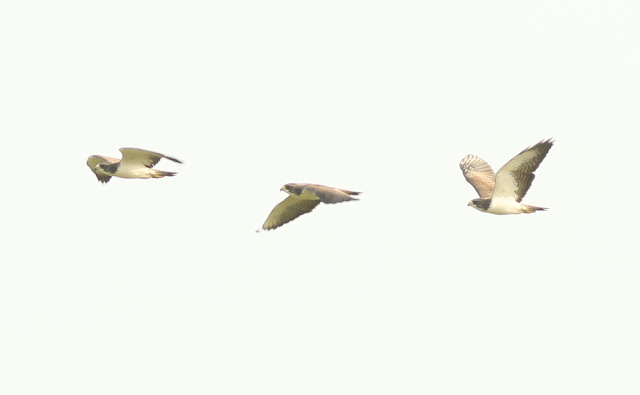 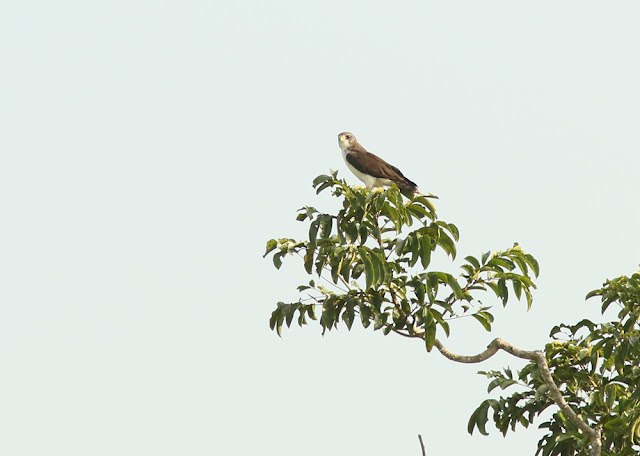 You can't help but appreciate these small tropical Buteos given they're so hard to find in the U.S.

All told, I think we spent about 2 hours atop the tower before giving way to the direct Sun and allure of more birds in the cooler understory...