During the 8 years I lived in Ann Arbor, my favorite place to bird was the Nichols Arboretum, a 125 acre city park nestled in the center of the city.  On the 3rd official day of the trip we birded the Metro Park, a large city (?) park near Panama City.  The habitat here was more open than the jungle of Pipeline Rd and the combination of wide trails with frequent joggers, some open lawns, and overlooks at both the city and into wider ravines very much reminded me of the Arb.  There aren't many Olivaceous Woodcreepers in Ann Arbor though. 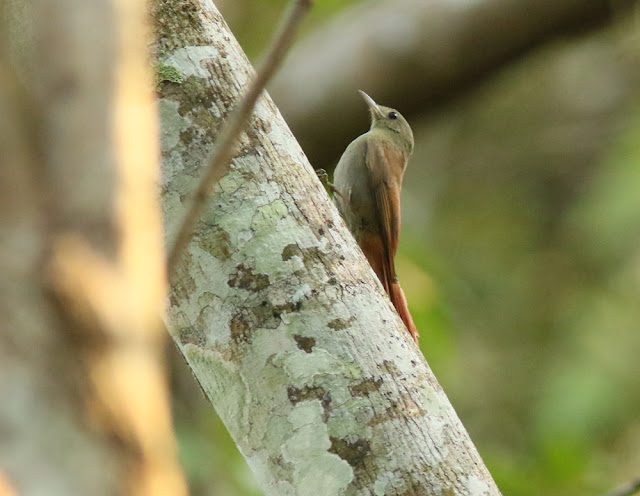 We started out mostly birding the sunny edges as the morning broke, studying distant honeycreepers and warblers, as well as a flock of (oft squabbling) Orange-chinned Parakeets. 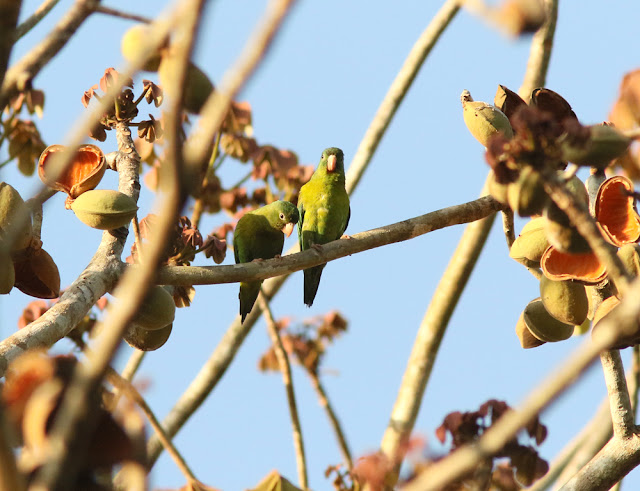 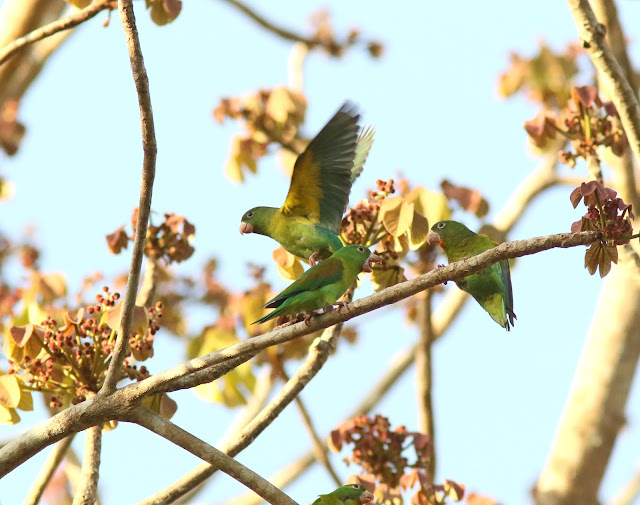 A few Yellow-backed Orioles appeared in the same fruiting trees. 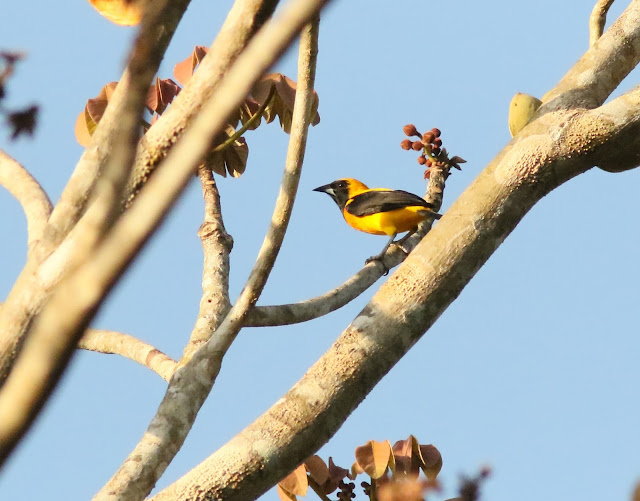 As we started ascending some of the hilly trails we followed a Panamanian family's gaze to this snoozing 2-toed Sloth, our second sloth species of the trip. 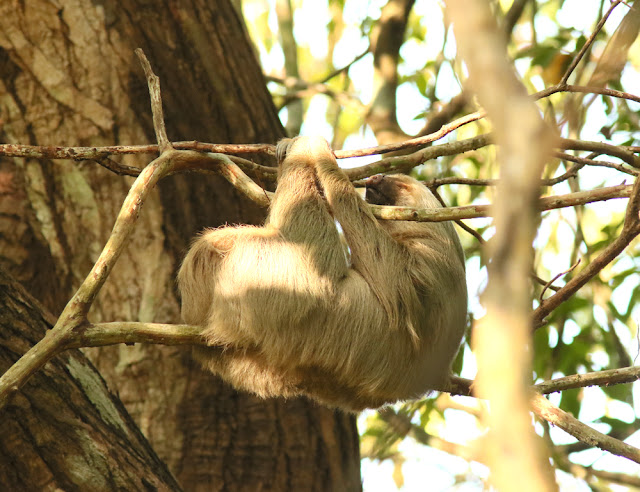 The birding wasn't super easy here.  Even though a lot of the trees were smaller leaved than along Pipeline, it was still very dense.  Fasciated Antshrikes could disappear without even flying, Long-billed Gnatwrens by flitting a few inches, and Rufous-breasted Wrens by a few subtle twists.  We heard but never saw Rufous-and-white Wren.  After playing hide and seek with a Bright-rumped Attila's excited song, this Whooping Motmot perched in the open. 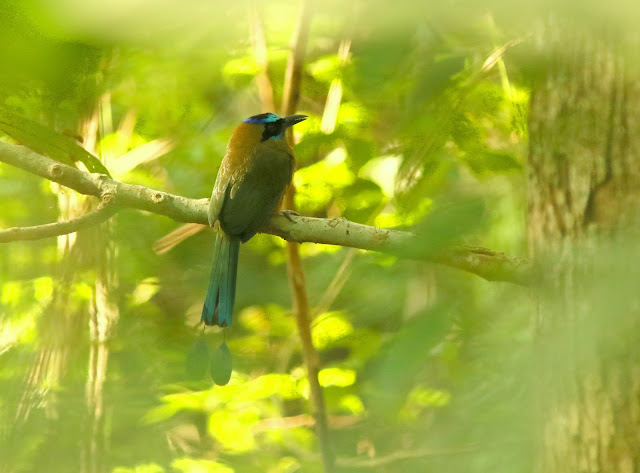 The Rosy Thrush-tanagers, however, did not.  The Metro Park is one of the best places in the world for this uncommon species.  We heard a male and a female occasionally counter-singing from each side of the trail.  Most of the group briefly got on the male, but it wasn't even long enough for me to draw the camera which is saying something.

We climbed to the top to an overlook of the fenced off U.S. Embassy and the more picturesque downtown Panama City (both pics below). 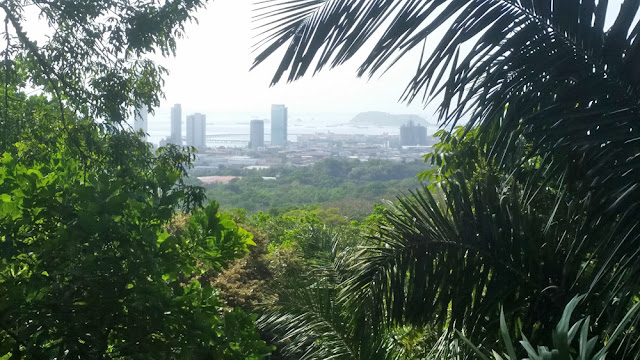 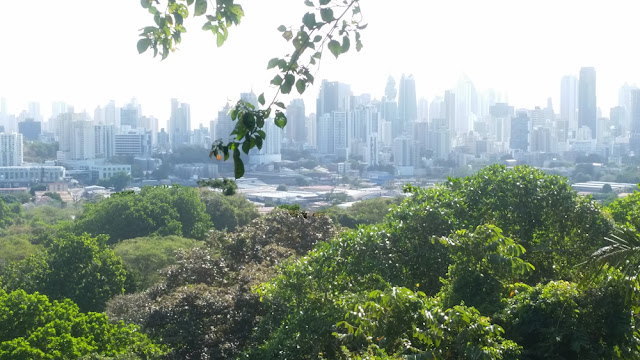 We found a female White-vented Plumeleteer on the way down 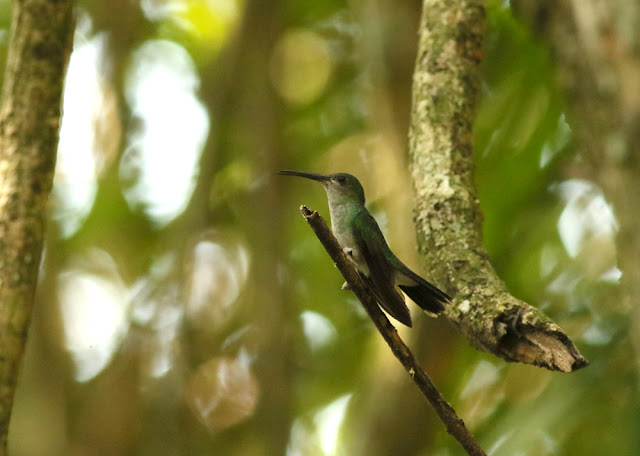 This may have been the only White-vented the entire trip.  From there we found a few small groups of birds, a few Ant-tanagers that didn't really come into the open, as well as some various small flycatchers and greenlets (including my best views of Golden-fronted).  Jose heard a Panamanian (Yellow-green) Tyrannulet, a Panama endemic that's probably easiest found at the Metro Park, but the group only got on a Paltry Tyrannulet, a bird with a very different call.  My suspicion is that the 2 Bird Theory was true this time.  After the thrills of Pipeline I was kind of underwhelmed by the Metro Park, but it would have one last bird as we left ... stay tuned.