We had signed up for 2 days of the pelagic but after day one was 4 hours of the most miserable I'd ever felt in my life, I decided to risk that I'd be miserable for the rest of my life if the others saw an albatross while I chickened out on Day 2.

Seaside Sparrow is a bird that has always eluded me on various trips to the coast and I made a few stops after dropping the others off at the dock looking for one.  Stop number 3 was the marsh behind the lodging where a bird had been earlier in the week but that we had missed the first evening.  Somewhat to my surprise, it was singing away right where it was supposed to be. 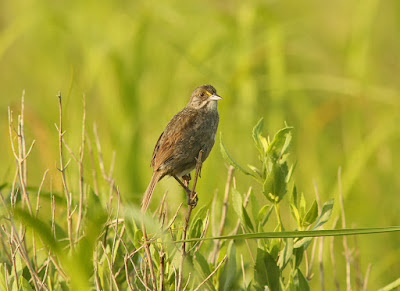 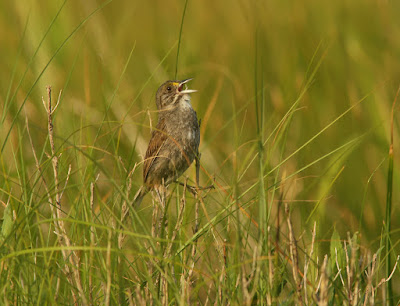 The bird sounded like a cross between a Red-winged Blackbird and a Grasshopper Sparrow. 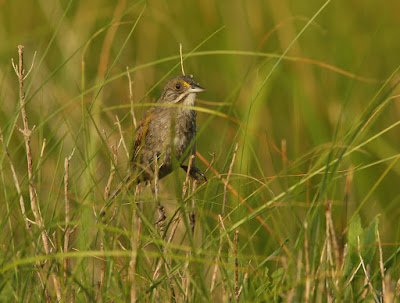 It was more cleanly marked that I expected; a lot of the pics I've seen of this species are of very faded drab individuals.

After a while it bailed on singing and flew out to forage on the vegetation that had washed up with the tide. 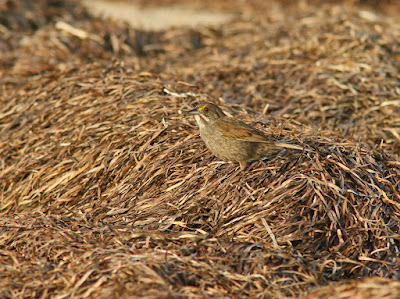 It flew back to its saltmarsh after a bit, spread-eagling with its long legs for a bit before flying farther back into the grass. 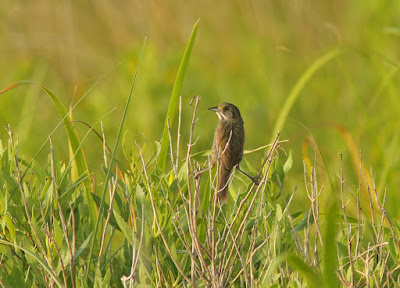 As to what I missed?  The boat got most of the way offshore before getting threatened with approaching 30 knot winds and turned back before they got started chumming...
Posted by Matt at 5:18 PM