A few of us drove to North Carolina this last weekend to go on a Brian Patteson pelagic trip.

This was the weather that greeted us as we headed out from Hatteras after delaying an hour to see how much of the local area the storm would envelop... 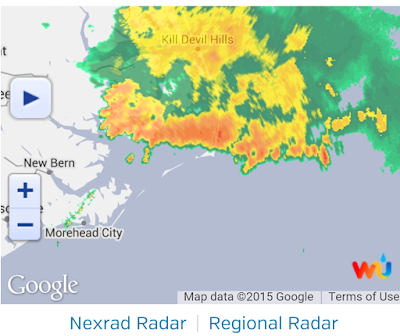 The two hour trip out to the offshore areas was incredible.  The seas were cobalt dark, once the rain stopped some of us headed up to prow of the boat as it motored through 6-10 foot waves (with occasional ones looking taller at time).  It was very exciting.  A Black-capped Petrel ripped past the boat and this Cory's Shearwater cruised along as well, this photo was taken with the boat still up on a plane 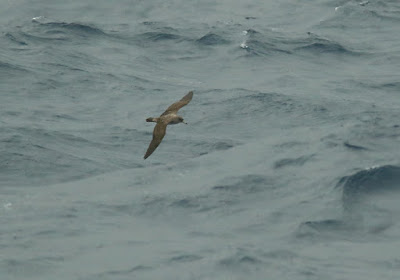 Great Shearwaters started appearing in numbers as the boat slowed and they started chumming. 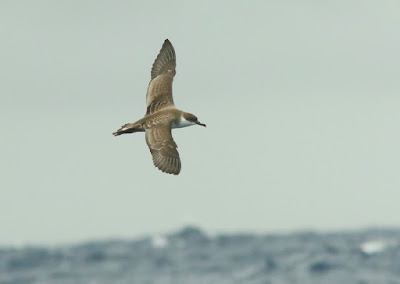 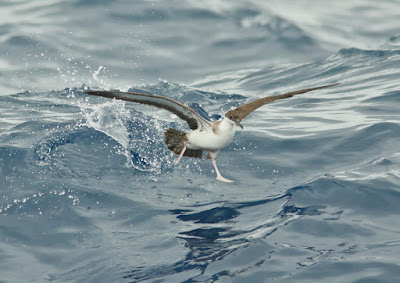 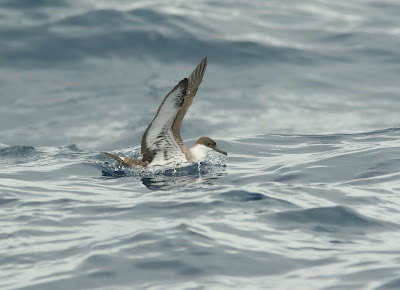 They would sometimes settle into the water to grab a choice bit of shark liver (others saw them dive somewhat under the water too for particularly choice bits).

With the boat slowed though we were very much caught up in a washing machine slosh of back-and-forth, and a lot of up-and-down.  I shook off developing nausea as a storm-petrel flock built (with the storm and lighting behind them).  They were mostly the long-legged Wilson's. 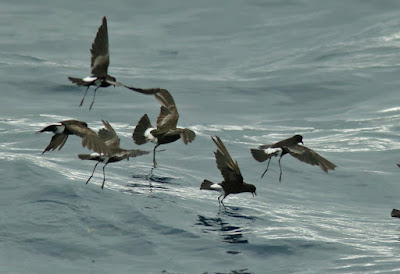 The right bird shows off the yellow foot linings. 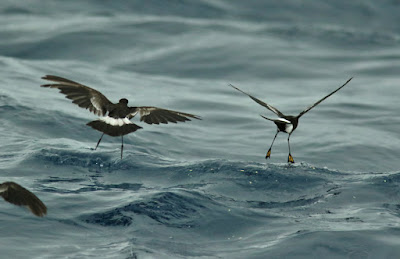 The Wilson's were joined by a Leach's and a few Band-rumpeds before my breakfast ended up over the edge.

I took a nausea pill and tried to re-gather myself.  I managed a few shots of some more Black-capped Petrels 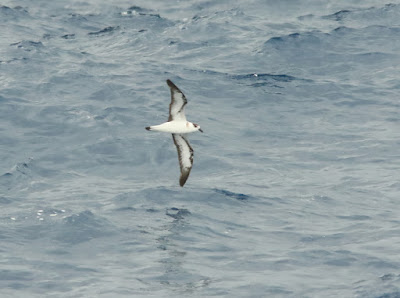 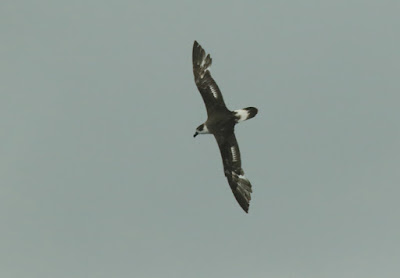 Unfortunately the nausea didn't pass, even with a strong anti-nausea medicine, it simply intensified.  The next 4 hours were probably the most prolonged miserably that I've ever felt in my life.  I was dry heaving over the edge every 15-20 minutes and abandoned both the camera and the binoculars.  My views of Audubon's Shearwaters and a Sooty Tern (a bird I should have been pretty excited to see) were brief naked eye glances before closing my eyes again and trying to concentrate on just lasting this 5 minutes before considering the next.
Mercifully when it was finally time to go, once the boat got back up on a plane and the up-and-down stopped I was feeling essentially normal after 10 minutes.  It's too bad the captain never had to move to a different area once we reached wherever we reached as I probably would have been able to enjoy the trip a lot more.  I've been on both oceans on boats ranging 40 to 100 feet for lengths of time ranging from 2.5 hours to 2.5 days in addition to many trips out into Lake Michigan (at distances from shore the same as this trip) on the boat I used to own and had thrown up once in all those times.  Clearly I'd never been in weather like this before though.

Ah heck Matt - so sorry. I've only been on one pelagic trip and I too became very ill, but I don't think it was quite as bad as this. Still the photos you did get are pretty great. Thanks for pointing out the yellow on the feet of the Wilson's storm-petrel. Cool!