aside from them being Skulking Bastards (said with all due respect). 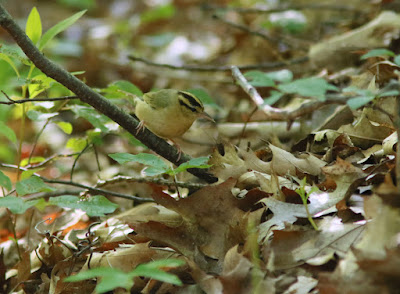 There's a lot of Pine Warblers in Warren Dunes this year which makes tracking Worm-eating down a little more difficult.  We got excited the day before Birdathon hearing a warbler trill at one of the traditional Worm-eating sites, and then a bit let down when the bird eventually showed itself to be yellow instead of caramel colored.  Of course Pine Warbler isn't easy on Birdathon either so it was useful nevertheless.

Some time was spent tracking Pine Warblers down this morning.  Some were singing the loose musical trill that's pretty easy to separate from Chipping Sparrow or Worm-eating, others were singing a much tighter trill.  Frequently more distant Pines would sound dryer making the next territory over the hill that much more exciting.  Until you got there at least.

I walked right past this bird.  It was foraging generally within inches of the ground 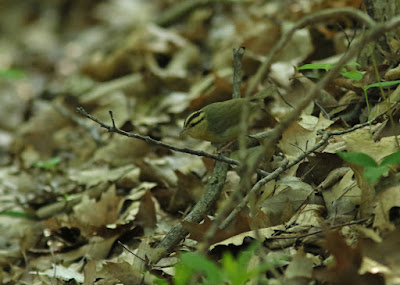 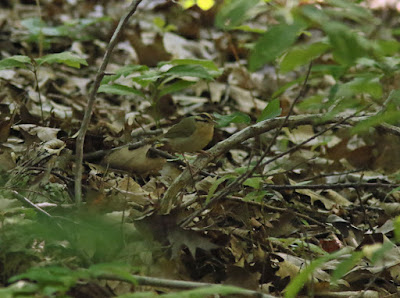 It once or twice gave a very short version of the song fairly softly.  The reason for that became obvious.  Another bird that was singing away nearby (the one we were tracking down when we nearly walked past this one) flew in and copulated with it before flying off to resume its song.  This bird, the female, kept looking for inchworms in the gloom.  I know that female cardinals will sing and expect (and even select for) males that will respond per the Kroodsma Singing Life of Birds.  I'm not sure if other warblers do this, but it seemed like this one was. 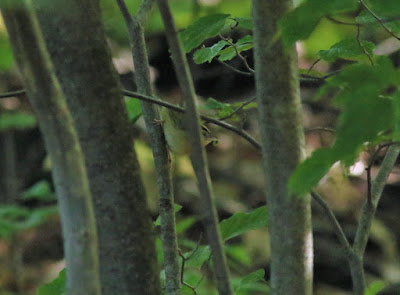 With a chance to listen to the male, it seemed like it would end its song more abruptly than Chipping Sparrow or Pine Warbler, something I've never noticed before.  We'll see if that's something that will be useful in the future or if it's more unique to this individual.
Posted by Matt at 7:56 PM