Who wants to be a Cuban Anole?

I couldn't bring myself to do a post on Collared-doves, so the blog returns to spring break in Florida.

As we walked the mangrove-lined mile between our hotel and the beach one morning we heard a soft Whump as a Red-shouldered Hawk flew down and grabbed a talonfull of leaves and sticks from the road's shoulder.  It flew up to a roadside snag and extricated a Cuban Anole (the invasive flavor is brown in color, the native Florida ones I was more familiar with are green).  Ironically it looks like the anole has re-grown its tail after apparently surviving a previous attempt by a predator. 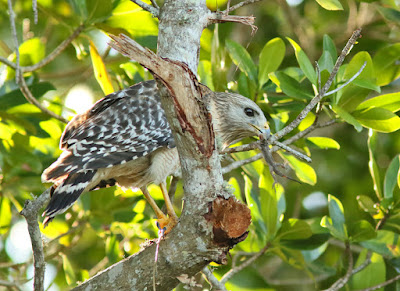 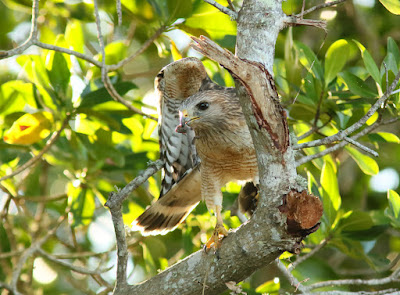 It flew off, presumably towards its nest, anole clutched firmly in its beak. My impression is that Redtails almost universally carry prey in their claws, though I don't usually see them carry 1/4 ounce-sized prey.  It seems like Roughlegs usually carry mice in their talons.

The above bird is fairly representative of the paler color that the Florida subspecies exhibits.  This next bird is somewhat brighter, even in overcast though the head is still lighter than ours are. 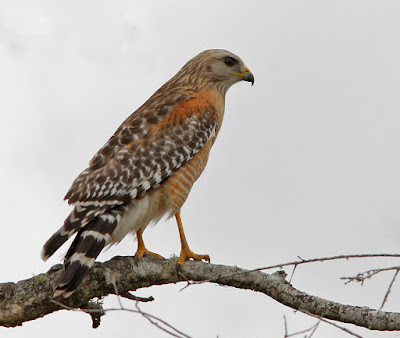 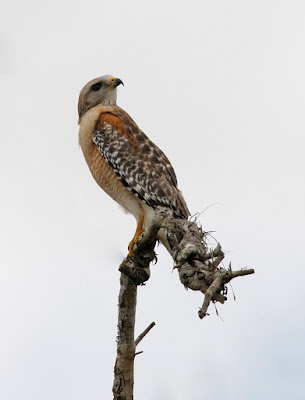 The trim Red-shouldered's are always fun to watch, though perhaps if Redtails were more novel I'd be going on about their characters instead...
Posted by Matt at 11:41 AM