Another year, another Birdathon in the books. For the first time in 4 years we didn't have a record. Three years ago we continued after the wrap up for a Berrien county Big Day record, 2 years ago we had first state record Fish Crow, and last year we tallied 170 during the Birdathon period. Yesterday, well, we saw birds. 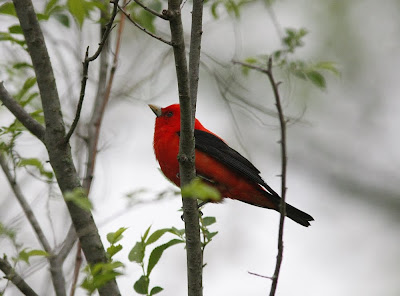 The night was very rough, a combination of an early start date (there aren't Chats or Sedge Wrens on territory yet) and a cool temperature after a few days of finally warming (no Chucky), and windiness (no rails) led to a poor nightbird tally though we did finally hear a Sora and see a Moorhen in the afternoon. We also forgot to look at the doppler radar after bailing on Jones/True road for our south county starting areas and didn't realize that a rainstorm was bearing up out of the south with the north county clear. After spending 40 minutes of prime dawn to get north of the rain, we did get into a lot more passerines than I expected at Sarett and Brown. Brown especially had good numbers of warblers, including good looks at Blackpoll, Cape May, and the first two tanagers pictured here. 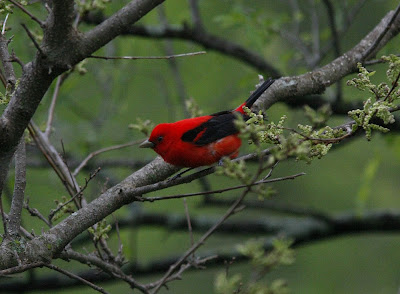 Note that this one has a Western Tanager style colored upper wingbar, a variant you see now and then.

Once the rain got back to us (raining out Prothonotory) we headed back south. Ceruleans were quite active at Lakeside road. Sometimes very light rain or mistiness can be good for seeing canopy birds as they get pushed lower and this first spring (?) male was foraging on the guardrail. 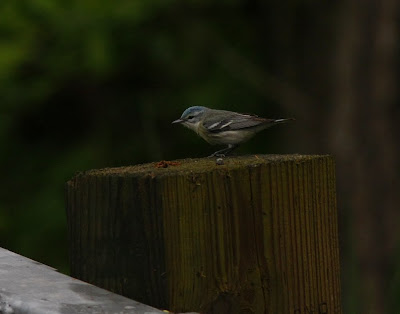 Of course since it was dark and misty, camera settings get pushed way past the optimal ones so the pics are pretty grainy, but I think this was the first keeper image of Cerulean that I've obtained since the 1990's back when I used an old film camera coupled to a telescope that was even older than I was.

Tiscornia produced as usual. We had both Common and Forster's Tern sitting side-by-side at the beach, a distant Common Loon resting out on the water, a Ruby-crowned Kinglet to make it unanimous, and this Laughing Gull. 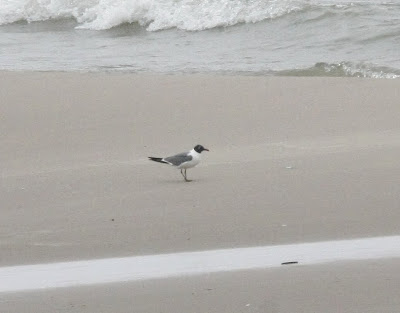 One other team reported a Franklin's Gull at Tiscornia. It is certainly possible that both birds were present (we had Franklin's a year ago to the day and one was seen yesterday at New Buffalo), ID points on this photographed bird include the longer heavier bill, long legs, and lack of white primary spots or white between the black and the gray of the primaries in flight (here's more on the differences).

We saw this tanager at one of our final stops, more of a Peachy rather than a Scarlet Tanager. My impression was that it was a first spring bird whose coloration wasn't that intense. Sibley shows an "orange variant" bird, implying that full adult males could be colored similarly. I'm not sure which this is. 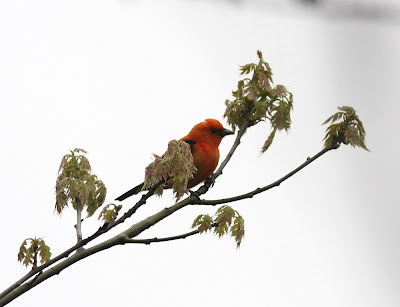 One final grainly low-light shot of a Black-billed Cuckoo, also at our final stop, always a nice bird to see (we had a Yellow-billed fly by as well). 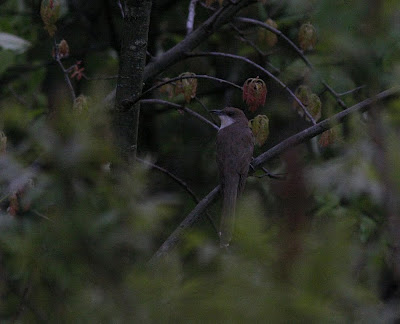 We ended over 150, better than I expected after the night birding and the rainy start.