the flight of a thrasher's life 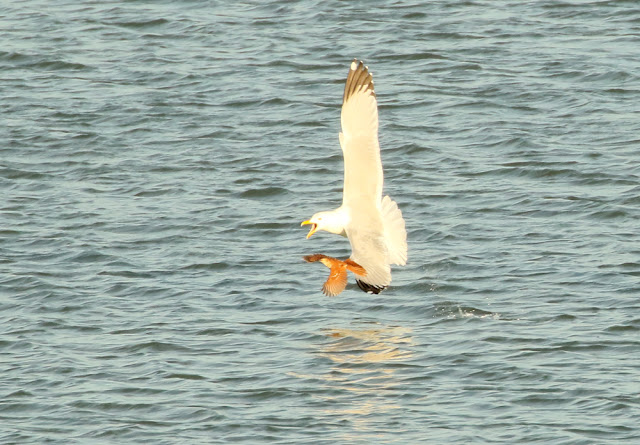 Imagine yourself as a Brown Thrasher, placidly enjoying a tail wind as you migrate north on an April night; what could you be thinking about?  Would you consider unique themes and variations upon the Song Sparrow and Towhee vocalizations you'd absorbed on the way north?  Maybe reprise a Wood Thrush phrase from last year?  Get ready to show off a unique piece-de-resistance like the White-breasted Wood-Wren you learned in the tropics?  (I swear I heard one mimic that sound this morning at Floral).

Would you have an odd sense of disquiet as dawn slowly broke ... but no song emanated from the oddly blue substrate below?  Nothing to sample, nothing to mimic?  With mounting panic you'd turn around and fly for shore.  How would you feel in that warm morning light?  Every morning of every week of every month of your (imminently close to infinitely shortening) life you'd welcomed the dawn with a couple hundred of your 9000 songs to be sung.  This morning, however, it's lighting you up in cream and near-crimson, contrasting you against the cold grays and blues of the water below.

And your flight will not go unnoticed.

Seven sets of eyes marked your flight.  Four atop the dune were a combo of brown, hazel, and blue, and they would passively watch; some rooting for (and some against) your escape.  Three sets of yellow would actively seek your death, shrieking all the while, as they attempted to cut you off from the sheltering trees and force you into the water, and ultimately swallow you whole.

I thought the thrasher was done for.  After a couple passes by the gulls it dipped down to the surface, its tail touching the water, its legs searching for purchase.  Most passerines forced into the water will never rise from it, but this bird did.  I know that OH SHIT jolt of adrenaline (I remember headlights suddenly materializing before me, a fraction of a second before the impact of my car crash last winter).  Perhaps a similar jolt when it found that water wasn't shelter from the screaming gulls bearing down allowed it to get airborne again, somehow dodge 2 of the 3 back-to-back, fade the 3rd a few seconds later and frantically get back to land.

The bird's bill was open on half my pics.  Could it have been singing the whole time as the gulls howled like wolves?  More likely it was desperately trying to oxygenate muscles strained to the breaking point.  But could it have learned a new song?  Is somewhere a thrasher composing a horror story ballad of screaming gulls and crashing waves?  Let me know if you hear it.  I'd like to think that subconsciously it is.