Waaaaaaay out of season Mergansers

After having scored the Marbled Godwit a couple days ago, yesterday I checked New Buffalo looking for more of the first wave of fall migration.  I wasn't expecting to see two representatives of migration's (cold and) bitter end... (8/3/15 addendum: and was unprepared for an ID issue I'd not run across before as Tim pointed out) 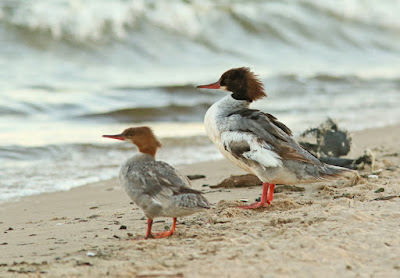 The larger Common is on the right with a more clearly defined white throat patch, heavier-based bill, and more contrasting head.  Sibley lists Common as about 50% heavier than Red-breasted though a person would probably guess closer to double with these two .  So.  The bird on the right is a lot bigger, but a person doesn't realize when Common Mergs are in the water how much bigger males are than females.  Sibley does note males are bigger than females but doesn't quantify how much.  The male's bill is bigger, but the whole bird is bigger; in retrospect the bills are pretty much identically shaped.  Red-breasted would have feathering extending lower on the bill making the bill base look narrower.  Also, the smaller bird has a fairly well defined white throat patch that doesn't just fade into the face as a real Red-breasted's would.  Which means that the smaller bird is a female Common Merg and the other bird an eclipse plumaged male. 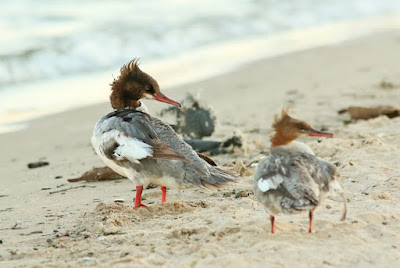 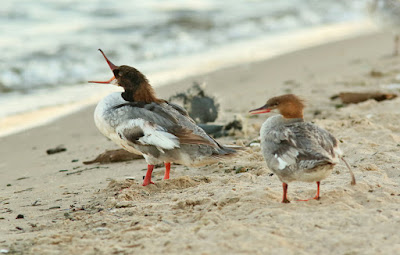 The Red-breasted's female's right wing is just trashed, with most of the flight feathers worn down to the feather vanes.  My guess is that the bird got stuck in the ice back in the winter and managed to rip itself free, at the cost of not being able to reach the breeding grounds. 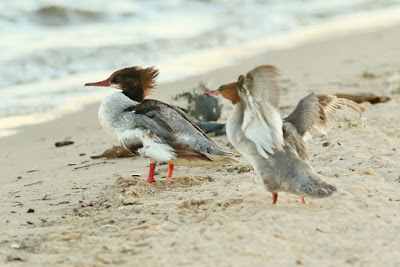 I think the (male) Common is flightless too, though I'm guessing that's just because it's doing normal duck moult.  I can't even speculate on what left it stranded in southern Lake Michigan.

The two stuck together but the (male) Common was somewhat aggressive towards the smaller Red-breast female at times. 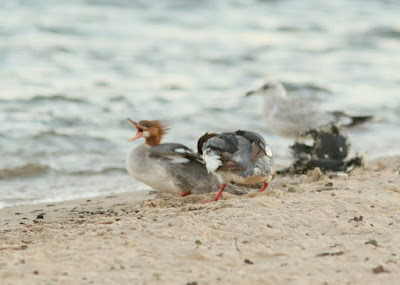 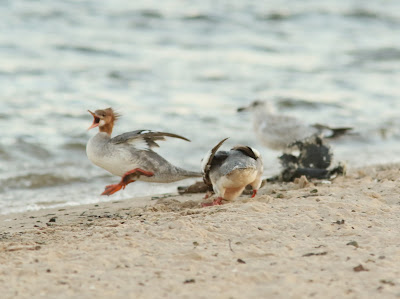 Apparently getting bit in the ass by a sawbill hurts.  I'd never seen a merganser jump before.

(8/3/15) one last pic of the female that in retrospect also has a much cleaner delineation between the head and the breast than a Red-breasted would have. 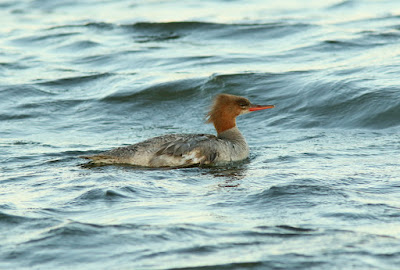 and a last view of the male... 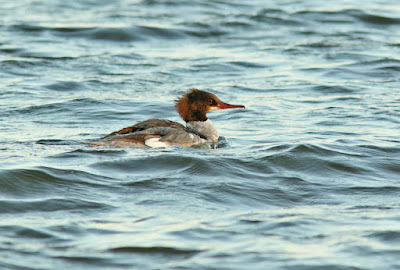 The University of Tiscornia said...

Both of those are COME, the bigger one is a male and the smaller is a female (sexual dimorphism!!!)