a Florida bird ... in Michigan!

I've been waiting for migration to finally catch up with the blog.  It's been slow going.  I had hoped to transition back to the county last week, but better late than never I suppose.

With a much higher lake level than years past and the aftereffects of storms last fall, there's not much beach left at Tiscornia, forcing a person to make the irritating choice between standing on the crest of the dune where flyby passerines are a lot easier to see or standing much lower where a person can see the beach.  I chose the beach for the limited time I had this morning and was rewarded by having a Laughing Gull fly in and land in front of me.

This is a phone-scoped shot. 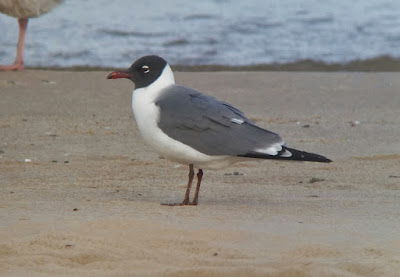 I'd seen the dark primaries as it flew in, but the more I stared at it the more I started doubting myself and wondering if it could be a Franklin's.  The innermost visible primary has a pretty good sized white tip and Tim pointed out that the hood leaves more of the nape white than a lot of Laughings will show.  I've seen Laughing's with longer bills as well.

A pierwalker resolved any doubts though as the bird took flight. 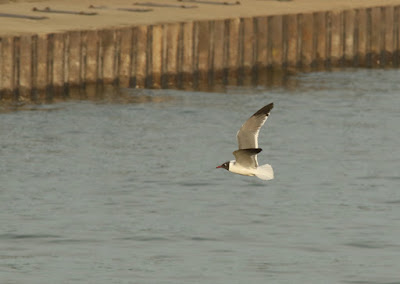 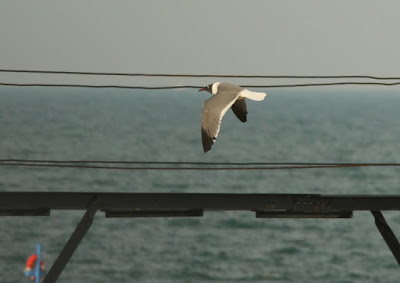 The primary pattern is solidly laughing; Franklin's Gull would have much less black in the primaries and an extra layer of white proximal to the black on the wing feathers.

It circled once and landed.  The second time it flew I never saw it again. 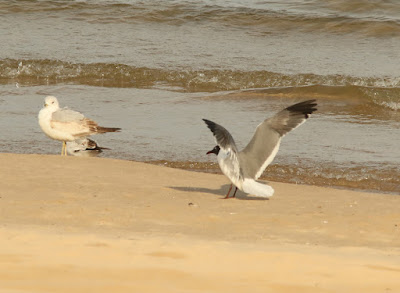