Rhoda, Andre, and newcomer Chace Scholten and I did the annual Birdathon yesterday.  The night started out quickly with 4 nightbirds in the first 4 spots.  We then had a bigtime lull adding maybe 2 birds of consequence in the 4 hours that followed.

Daybreak (fortunately dry after a scary looking front passed just to the south in Indiana) found us on the beach where we flushed my first nighthawk of the year off the beach.  A flock of Black-bellied Plovers and SB Dowitchers landed briefly. 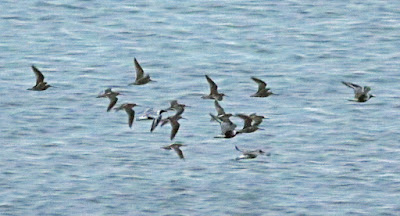 It was still pretty dark as evidenced by the very high ISO (and brightened too) photo.

As we left New Buffalo a coal train was crossing the road out of town.  It seemed to be slowing down and eventually the very last car came to stop completely blocking the road.  Arrrrgh.  We turned around and I wasn't very happy about missing a couple spots that can sometimes hold useful birds.  The detour wasn't all bad though; a pair of Brown Thrashers crossed the road.  We stopped to try to make them unanimous and Andre noticed a different mimic singing behind us... 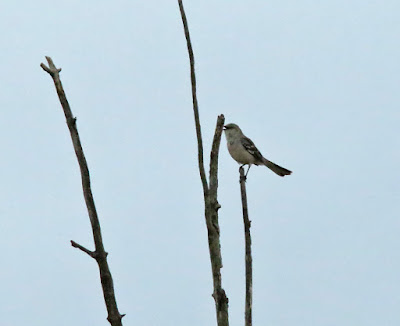 It was the only mockingbird we had all day.

Floral and some of the surrounding trails turned out to be very active.  By the end of the day we'd tallied 31 species of warbler.  A person could get some pretty serious WarblerNeck after a day like this.  Sometimes I cheated on the high backlit birds.  Here's probably the view a person has through bins... 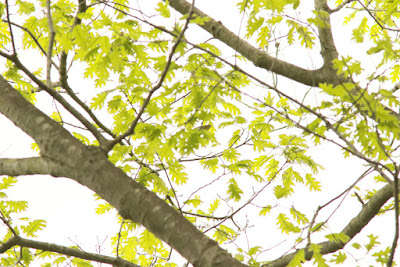 Not sure what it is?  Not sure where even the bird is?  Just take a pic and ZOOM it in ... 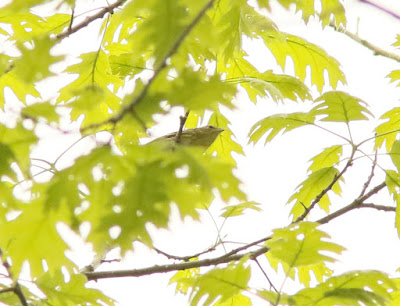 and Voila, female Blackpoll Warbler.  New for the day.

There were other birds around too.  I took the required Scarlet Tanager pic given that they usually dominate the end-of-the day compilation tales. 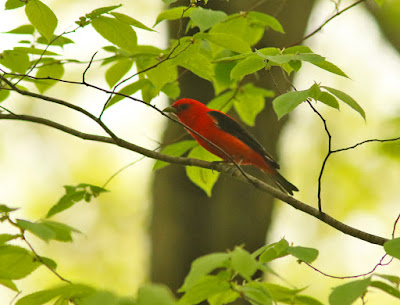 The bird that figured most prominently in the story-telling however, was Black-billed Cuckoo. 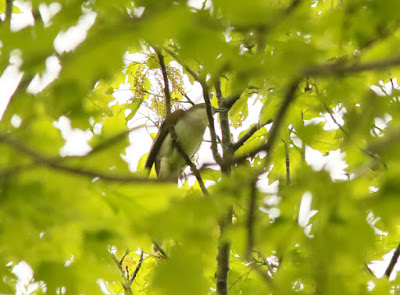 Clearly they were moving through.  We saw 2 and heard a third over the course of the day.

Along those lines was Olive-sided Flycatcher.  Here's the first one we saw. 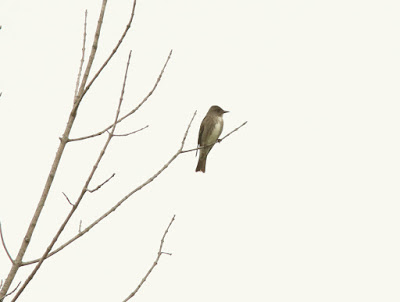 The second one was right next to it. 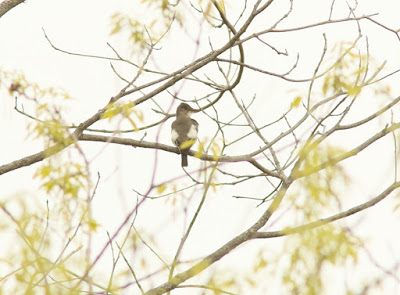 The third one was in the dune hawkwatching.  There's been a couple years in Berrien I haven't found Olive-sided.

Similar was Yellow-bellied.  Andre thought he heard one earlier in the morning, but it gave the keep-back call that I just don't hear often enough to reliably separate from Least's che-bek.  Another one made it easier by popping up fairly close 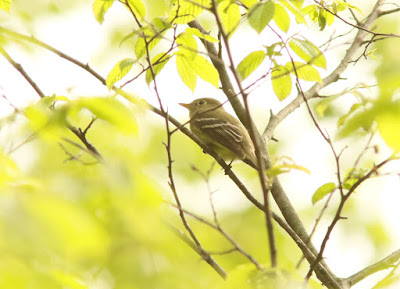 Then we saw another one and started worrying that we were mis-calling Acadians somehow in the fog of Big Day lack of sleep.  It made life easier by calling (the more recognizable chu-wee, even better) 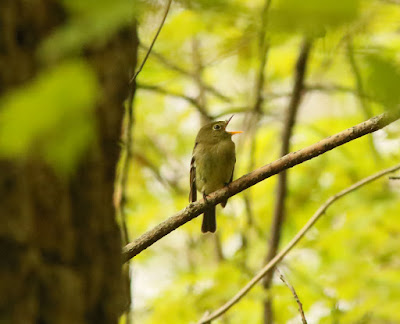 We kept seeing them as we walked Floral (and then on another trail too). 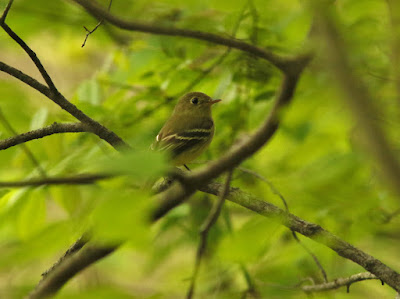 I've seen 3 of these birds at Floral before (and usually later in the month), but 5 was pretty funny.

After we left Warren Dunes the day became the somewhat less enjoyable appointment style birding.  Need a Solitary Sandpiper?  Head for the nastiest skankiest pool of pseudo-mud you can find. 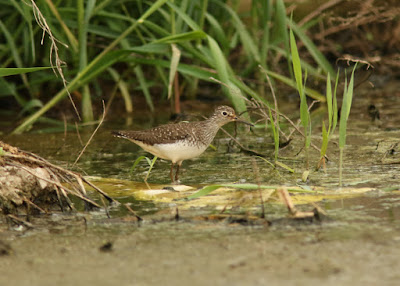 Semi-palmated Plover was one of over a dozen yearbirds for me. 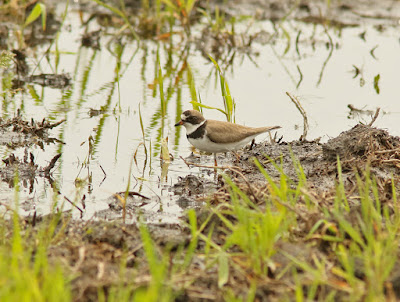 We did remarkably well on hawks given that none were flying from the dune overlook.  At one point we were going to turn right when Rhoda and I noticed a raptor flying away to the left.  We turned left too and after a mile tail chase caught up with a young Bald Eagle.  It felt like it was going 35mph with the presumed tail wind.
This young Broad-winged popped up in Warren Dunes.  Having seen a bunch of young ones in Costa Rica this last winter this bird was less confusing than it would have been 5 years ago for me. 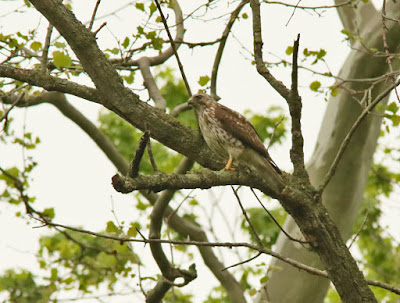 Three Oaks had the most uncommon bird that our (and most) teams encountered. 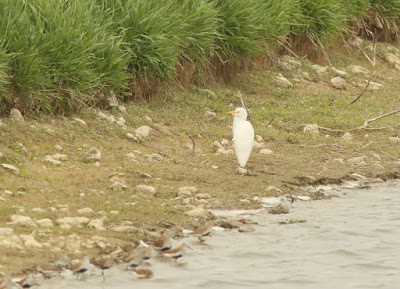 It was there at the afternoon check, our morning check netted 2 ducks I'd never had on Birdathon before, Ring-necked and Canvasback. 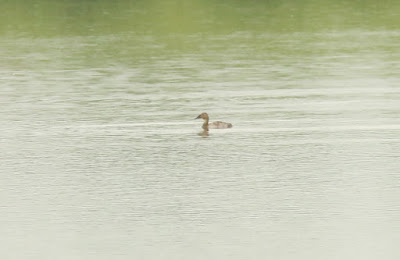 Ironically there was a drake Canvasback at Brown in the afternoon too.

Here's the final new bird of the day ... 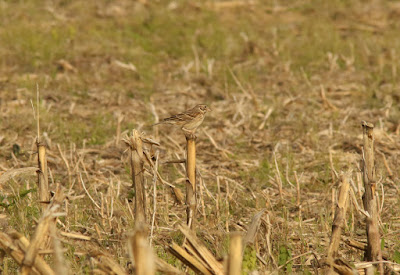 a Vesper Sparrow in the field across from Love Creek where Tim had found one for the last bird of the day several years ago.

All told, we ended with 155 species (we forgot to check off RB Merganser on the tallysheet we turned in so the reported total was 154), a couple behind our average, but an enjoyable day nevertheless.
Posted by Matt at 6:07 PM

155 species for the day? That's amazing! What a great day.