an actual Laughing Gull this time

yeah, it's laughing at me.

Yesterday I checked Tiscornia after work and noticed a Laughing type gull on Silver Beach.  I drove over (after waiting for a train to pass.  Nothing like a stopped train on the tracks between a birder and a good bird).  I didn't have my camera with me so these are phone-scoped. 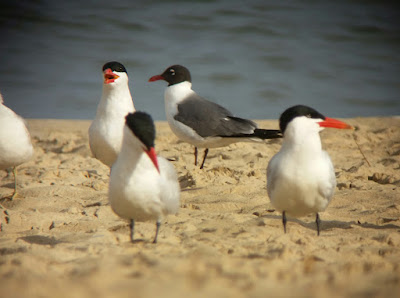 The bird has a full hood, very little white tips to the primary, a nice long bill (and long primary extension) and limited eye arcs.  It would have been nice to get flight shots for comparison with last week's bird, but oh well. 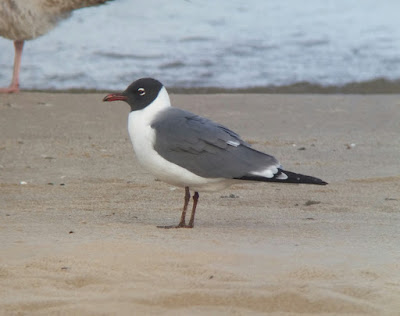 The hood doesn't go down the nape as far but is fully black in the face.  Most subadult Laughing and Franklin's Gulls will have some white in the face.  This has a fully black face so I reflexively aged it as an adult, noted extensive black in the wingtips and called it a Laughing. [5/14 addendum - having discussed this bird with 3 other people I trust that's as far as you have to go.  It's and adult and therefore this amount of black means Laughing Gull] 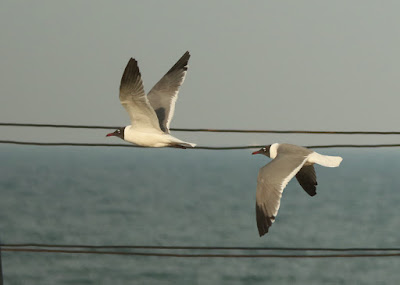 In retrospect the P6 with an extensive white tip (which I had noted and decided was just an aberrant feature given that the rest of the primaries were laughing type without the white patterning) is a fresher feather than the rest of the primaries (and those primaries have less black than a legit Laughing gull would have.) [5/14 addendum, see above.  Also the black on the underside of the wing is more extensive than a Franklin's would have] 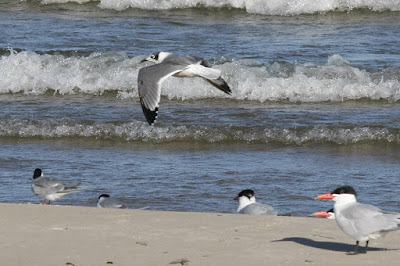 This one has vastly less black in the face and a much more adult wing pattern with white between the gray of the wing and black of the wingtips.  The one from last week has an adult head and much more juvenile wing pattern.

Here's a line of Laughing Gulls from 6 weeks ago in Florida.

I guess I should have worked harder to get FL flight shots. 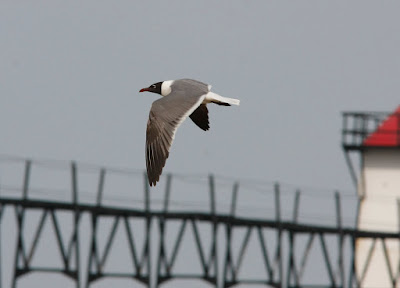 time to go find some warblers.
Posted by Matt at 4:01 PM