I've been in Maine for the last few days on a family trip. I'm still getting a sense of the area and what will make cohesive blogposts so we'll just go ahead and lead off with the coolest of the local birds, Atlantic Puffin.


We took an organized boat trip out to see them last night and were not disappointed. We visited Eastern Egg Rock, the southernmost breeding location for these birds, a mile or so off of Pemaquid Point (the lighthouse on the Maine quarter). The birds were re-introduced here in the late 1980's and now there's about 100 pairs. 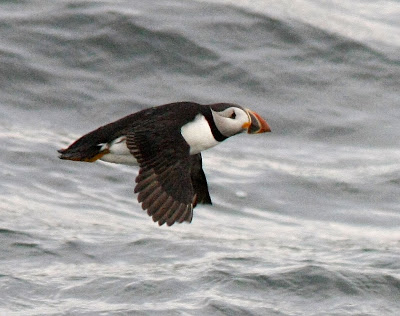 This is my lifer puffin perched up on the rocks behind some Black Guillemots. It turned out to be the only one I'd see on land, the rest were all in the water. 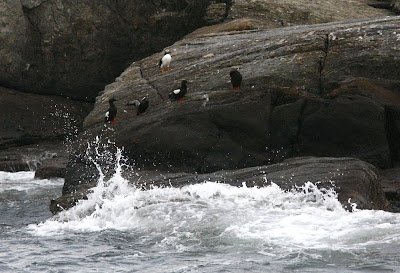 The lighting wasn't the best with near sprinkles and 6 foot swells throwing people around when they'd try to stand if they weren't suitably braced, so photography was a challenge. I was shooting at max ISO to let me shoot as fast exposures as I could, but that tends to flatten colors. 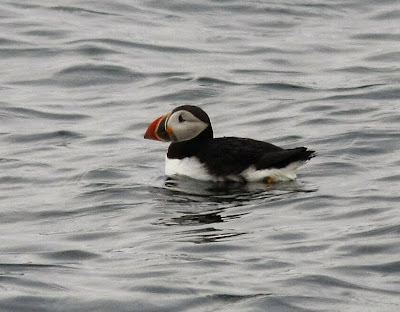 This shot gives a sense of the swells as they crashed over the first edge of the island. 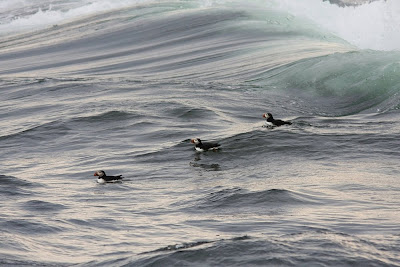 There were also 3 different terns breeding on the rock, as well as numerous eiders and Laughing Gulls, but I'm going to leave their descrambling for another post. 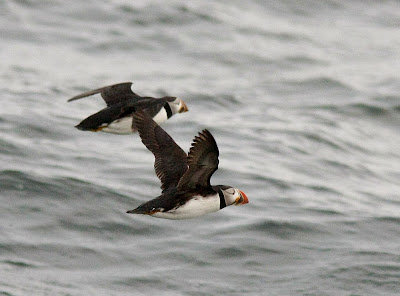 Matt, what great photos of the Puffin. I, too, saw my life Puffins this year. Isn't it a great bird?