Back to the shotgun school

... though not for this bird, easily identified as a juvenile Common Tern based on the strong black carpal bar and fairly extensive brown tones to the cap and back. 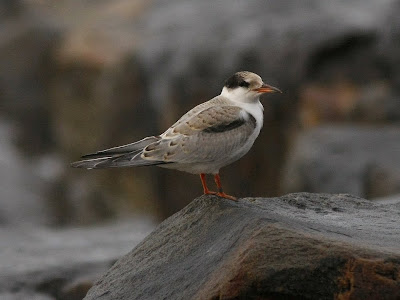 One of my birding hopes for this trip was to get a chance to study various medium terns, especially Arctic and Roseate, birds I'm very unfamiliar with.


Unfortunately, the only birds I've seen from shore have been Commons, here's the juvie with the parent. 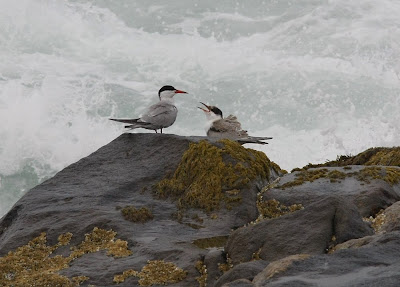 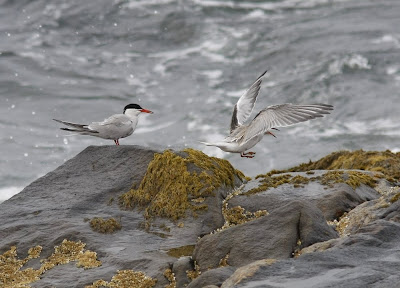 My only chance at the other two was the puffin cruise out to Eastern Egg Rock where Common, Arctic, and Roseate breed. I quickly realized I was going to be on my own with regards to the terns when about half the boat was taking advantage of rental binoculars from the tour. The leader showed large posters of the 10 most common or so birds to be expected on the trip, one of them labeled "Tern." They mentioned that there were 3 different species, but they all basically looked the same.
While scanning the island I could see why they took this view, it was basically impossible to try to speciate the birds 200+ yards away from a rolling and pitching boat. I was reduced to the old shoot first-ID later practiced in the 1910's rather than the 2010's in hopes of being able to ID the pictures since they at least would hold still. The overwhelming majority of the birds I saw were Common Terns.
Here's a bird that you can contrast with the spreadwing juvie Common above, that may seem quite familiar to Berrien birders, a juvenile Arctic Tern. 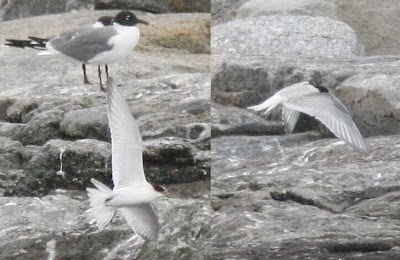 Note the white secondaries from above, the vague gray (rather than blacker trailing edge to the primaries) as well as the impression of more black in the face and a shorter bill than the Common.

Here's a composite of the only adult Arctic that I managed. 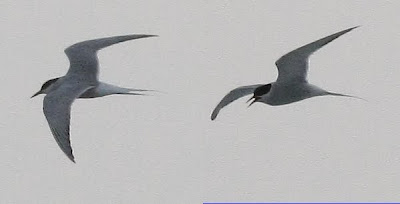 Note the minimal black in the primaries, in contrast to the next bird, an adult Common. The Commons this time of year show a fairly contrasting wedge of black for the outer 5 primaries: 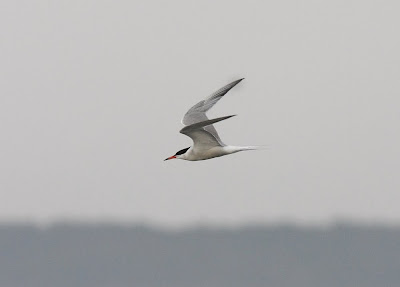 Next up is the federally endangered Roseate Tern. These are much paler than the Commons. Their wing patterns are different as well, with only the outer couple primaries dark, giving the impression of a dark line rather than dark wedge. The Roseate is on the left obviously. 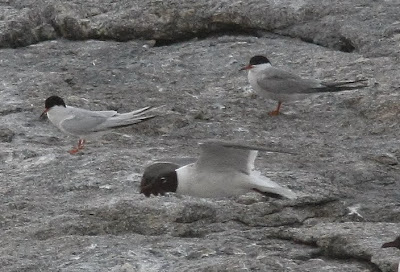 You get the sense of a narrower darker bill as well. Virtually all the Roseate's are banded, many of the Commons are as well. (There's a number of projects ongoing out on the nest rocks, some entail interns banding every young bird they can find; Roseate's are limited to a lot fewer colonies so a higher percentage of the young are banded. One of the banded female puffins is an original transplant from Newfoundland and is known to be 31 years old).

Here's a sample shot. If you want to channel your inner Kip Miller you can try to pick out the 3 Roseate's: 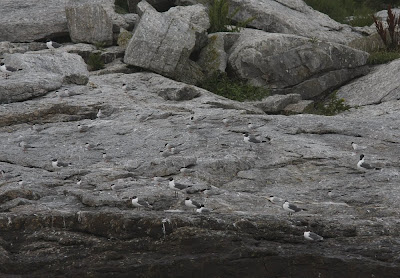 Here they are cropped out and magnified:

They're birds lowest on the left, low and right, and farthest right respectively.
I actually took the boat trip again last night hoping to improve the pics; the first day I took was the first cloudy day of the trip. Yesterday the conditions were light rain and dense fog which didn't lift until 5 minutes after we turned back. Needless to say, I didn't improve the pics (or the views - so my lifer Roseate experience is somewhat retro-active).