I spent a little bit of time at Tiscornia this morning where the highlight was a juvenile Bonaparte's Gull. It's been a week since I've been to the beach and today was the first day for me with juvie Bonaparte's (and Herrings too for that matter).

The bird was quite tame and waited a good 30 seconds longer than all the other gulls to flush before the Terror of Tiscornia, otherwise known as a poodle that's frequently walked down the beach, wandered too close. 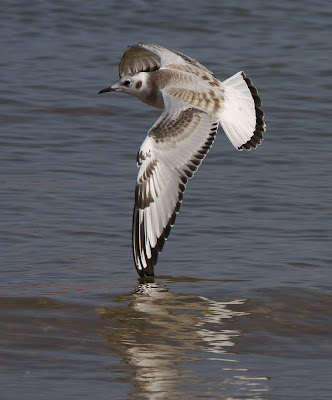 Presumably due to inexperience it's actually clipping/shearing the (essentially calm) water with the outer two primaries. 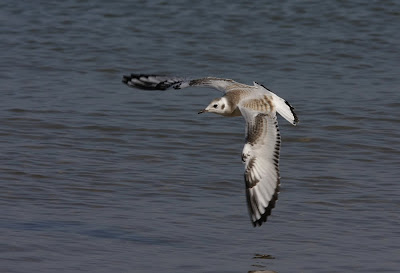 Later, in the evening I received a phone call about a Yellow-headed Blackbird at a private location.

The bird couldn't have even taken an hour to re-appear amongst a cowbird and RWBB flock. Based on Sibley this would probably be a 2nd year male given the small white pocket handkerchief (primary coverts). It's not as straightforward in Pyle where a person might be able to make a case for several age groups. Perhaps better photos will resolve the issue, digi-scoping in this case would have been better. Whatever its age, it's my 300th bird for Berrien Co.