We had a couple interesting gulls this morning at Tiscornia, starting with a presumed adult hybrid between Great black-back and Glaucous. It's not pictured in many books, but is in the Howell and Dunn Gulls book. Basically it's a GBBG but with a white trailing edge to the primaries. For whatever reason I don't have a great close pic of a flying adult GBBG (though 2 posts ago has a marginal one), but suffice it to say it shouldn't have a completely white trailing edge. Tim had this bird back in mid-November (and got vastly better shots then) as well as yesterday. It was the first time I'd seen it. 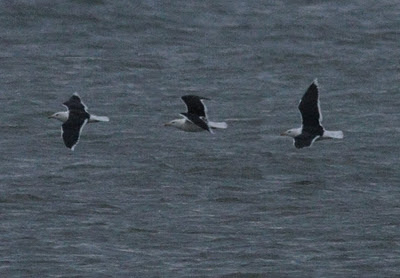 Also on the beach this morning was this bird. 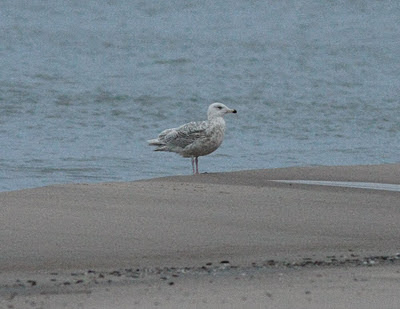 The size, whitish primaries, and perhaps the bi-colored bill certainly indicate significant Glaucous heritage. I've never seen a Nelson's Gull (GLGU x HEGU) with this white of primaries, though admittedly that's what Sibley shows. (Howell and Dunn jive more with my experience, showing 8 photos of first year presumed GLGU x HEGU and none have white primaries, though one shot of a 2nd cycle does). The fine dark markings in the wing coverts on the perched bird are really reminiscent of a GBBG. The pic of first cycle GLGU x GBBG in Howell and Dunn, however, shows these to be much more extensive (though they make the caveat in most of their discussions of the hybrids that they can all be variable and run through the spectrum of adult appearances).

It flew by the end of the pier a couple times. 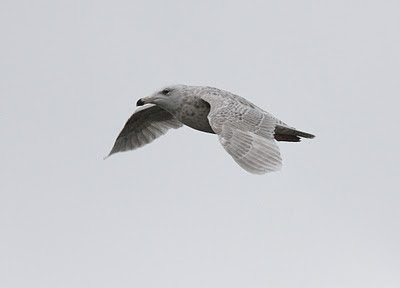 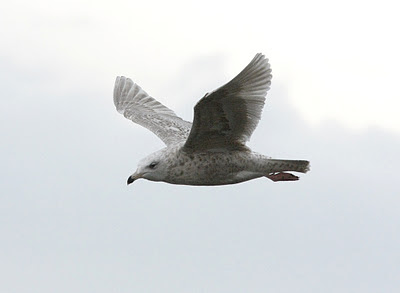 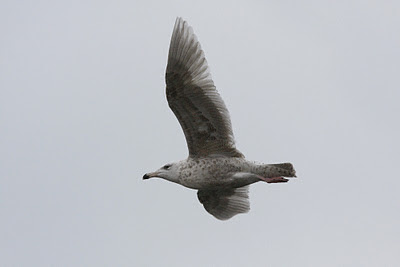 This was a very large gull which we thought might support GBBG x GLGU for this bird too, though Brandon Holden has a shot of a really big Nelson's as well. The blotchiness of the underparts is displayed by Glaucous (though usually not this diffusely) in 2nd cycle birds. Given that Nelson's (GLGU x HEGU) is more likely I wonder if this is actually a 2nd cycle Nelson's. It's really frustrating to not be able to solidly age it, but with GLGU starting with a bi-colored bill and skipping the dirty brown bill altogether it's hard to fall back on the bill. Perhaps Tim's shots will show the back a little better to see what feather ages might be there.