If anyone's looking for a novel upper body workout, I've got one for you. Walk the New Buffalo jetty, while carrying optics and a three-year-old. Four-year-old Hazel was enthralled by the prospects of clambering over the rocks, Hannah not so much. I was hoping for a Purple Sandpiper, but when a duck swam out at a rest point I was pretty happy with a bonus Harlequin Duck. I've never missed Harlequin Duck in Berrien, but this was a year bird. 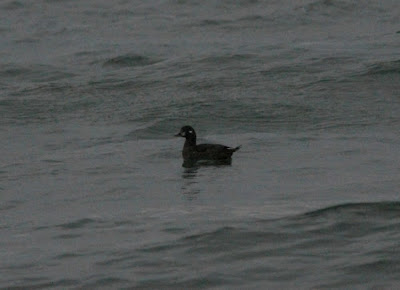 This duck (the darker less-patterned female on the left) was at Tiscornia this morning. 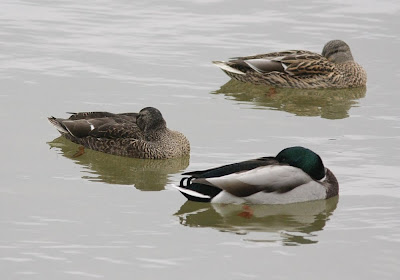 It appears to be a female Mallard x Black Duck hybrid. Males are pretty easy to identify, but this is the first time I've had a good look at a presumed female. 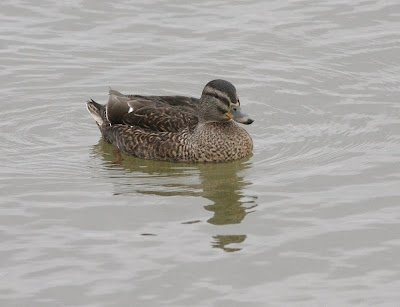 The bill has the pattern of a mallard, with the so called melting chocolate icing effect, but it's muted by the ground color of the bill being a Black Duck's dappled olive rather than the orange of a mallard.

The cap is much more contrastingly dark than a female mallard's (you can compare it to the top photo). It almost had some vague greenish tones in the dark overcast. 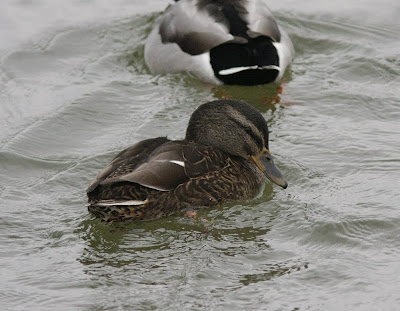 The scapulars and side pocket have a suggestion of patterning to them, but nothing like the female Mallard's.

For what it's worth, here's the speculum. I've never had a digital camera yet that didn't way over-blue violets or purples in nature; this photo shows the color bluer than it was in life. I don't have any file photos of the extent of white in the speculum of Mallard's, but it's a heck of a lot more than a Black Duck would have. 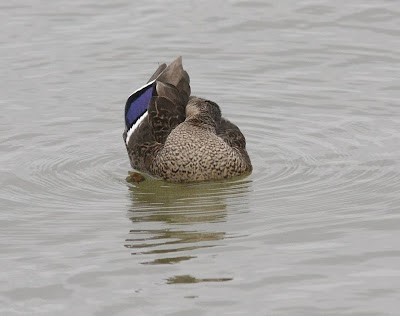 Given that we've got a car in the shop hopefully Purple Sand (and even Thayer's Gull) will come to me at Tiscornia, I'm not sure how many trips to New Buffalo will be in the works for the next week or two.