This time with pictures

I arrived at Tiscornia this morning to find the lakewatch overlook empty except for Tim's chair, and picked him up in the bins walking out the pier. I followed him out and eventually caught up to find he'd spotted a frigatebird way out over the water. Having seen one a couple years ago at Tiscornia I was glad that this time we'd get pics. I picked it up and we watched it cruise about, slowly getting closer. And closer. And closer. About the time it was about to start filling the frame I lost it behind the lighthouse. A quick sidestep over and here's an abridged series of what I saw through the viewfinder next... 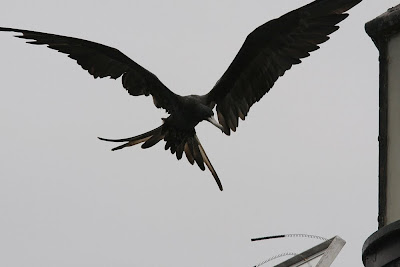 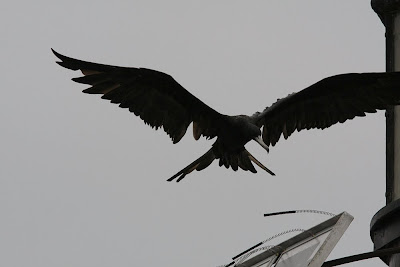 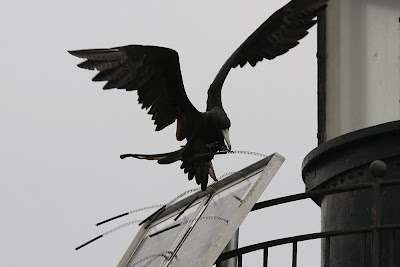 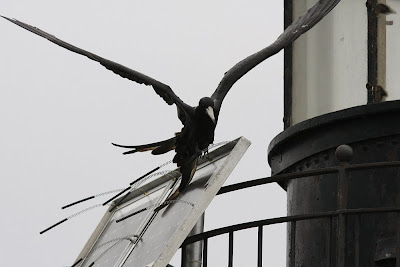 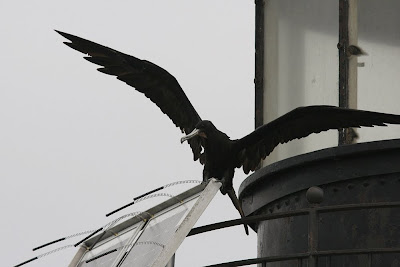 Flabbergasted doesn't begin to describe seeing a Magnificent Frigatebird pull a murrelet and land on the lighthouse, but land it did. It remained despite workers working on the lighthouse, using a generator, blow torch, and scaffolding.

It was still there when I walked away 3 hours after it landed. 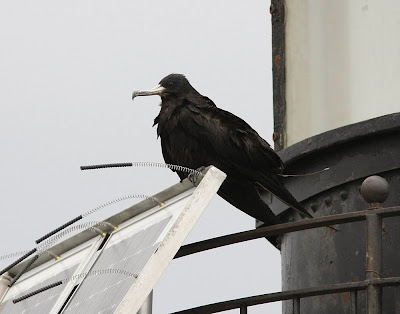 Just in case the gape color is useful in separating these from a couple of the Southern ocean species here's one more. 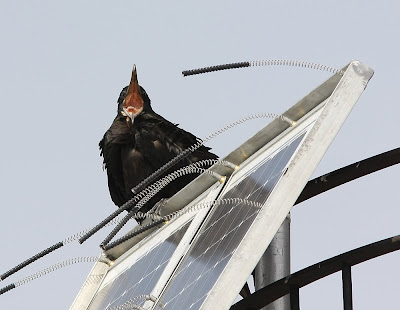 The lack of white in the underwing and the lack of alar bars on the upperwing reduce this to male Magnificent Frigatebird of the birds seen in the ABA area. Apparently Ascension Frigatebird is extremely similar to male Magnificent, though somewhat smaller. I still need to sort through all of the ~700 photos I just downloaded from the camera, I'll probably put a few more up in the next day or so depending on time and their value.
For what it's worth, the right wing is pretty beat up. I remember looking back over Berrien Frigatebird records a few years ago, to my memory all followed gulf hurricanes whose eye ended up Lake Michigan so this bird's a bit of an oddity. While that recent hurricane that threatened the eastern seaboard pushed frigatebirds up to Nova Scotia I don't know of any on the east side of the storm. The North American Birds Changing Seasons column from a few years ago that followed the last Berrien Frigatebird noted that frigatebirds were the main thing pushed inland by Hurricane Ike and that the pattern seemed to be that really massive (though not necessarily those with the highest winds) tend to push frigatebirds inland (such as Hurricane Gilbert that preceded 2 of the other Berrien Frigatebird records).