I read an article in an old Birding (I think) magazine where one of the west coast guys makes an allusion to the lions which make the kills and the hyenas and jackals which arrive later to try to steal some dinner. Tim, our local lion, has been out of the county for a week and Andre has been on fire lately trying to grow a mane. Between work and having the kids by myself this weekend, I've been in full jackal mode, my only birding in the last few days chasing a Baird's Andre found yesterday and Long-billed Dowitchers he found tonight. 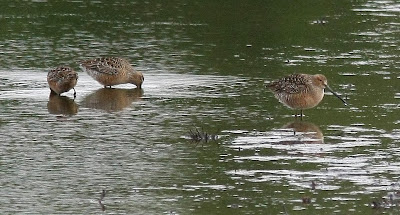 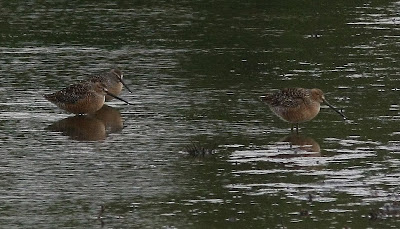 The bird on the right is basically callable based on the bill alone which is saying something since there's a lot of overlap between the two species. These birds are pretty close to full breeding plumage (there still are some wing coverts coming in, and the birds aren't fully red back to the rear-most flanks). There is more than enough warm coloration, though, to know that the only candidates are Hendersoni Short-billed Dowitcher (the subspecies we get), or Long-billed. These pics aren't the greatest; once I get a digi-scoping camera back this would been a good chance for Pepsi challenge photos between full-frame digi-scope and these heavy crops from the 300mm lens. However, they do show enough of the upperparts to evaluate one of the easier ways to separate the two in spring. Long-billed has dark scapulars with some fine rufous markings and some contrasting white tips. Short-billed has broader gold markings in the scapulars.
Honestly, I'd bet you could guess the ID of dowitchers in Michigan at about a 95% clip based on dates alone, the first week or so of May are Long-billed. The 3rd week of May is Short-billed. In the fall, July and August are Short-billed, September could be either, October is Long-billed.