Tiscornia was fairly productive this morning. As soon as I crested the dune the dark mantle of a Laughing Gull popped out. This picture is of the 2nd bird which appeared later, the first one was a presumed 2nd summer based on some black remaining in the tail. I have a couple crummy pics of both Laughing gulls in the same frame but they're not worth displaying. 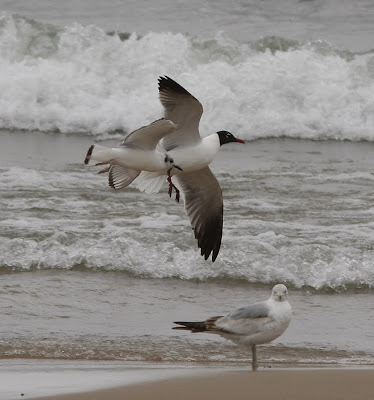 Note the smaller approximately one-year-old Bonaparte's gull wheeling in front of it.
After a little bit a Piping Plover betrayed itself by running; it was essentially the same color as the sand. 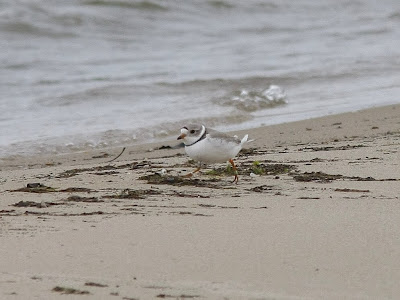 This is only the 2nd Piping Plover I've ever seen in the county. The above photo was shot from the pier as it came closer. Any other shorebird and I'd have been on my belly in the sand waiting for it to run up. With some squinting at the heavily cropped photo you can see the bands, orange over green on the left leg (the orange band is actually above the knee) and what I took in the field through the scope to be green over orange on the right.
A little more time and a willet appeared. It did walk down the beach and approached myself and another birder fairly closely... 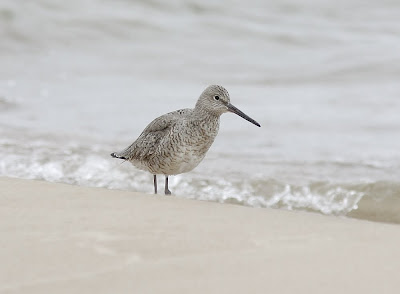 ... before taking flight and landing in the tern flock. I had high hopes for this pic on the camera; unfortunately I don't think the IS had kicked in and it's not as sharp as I'd hoped. 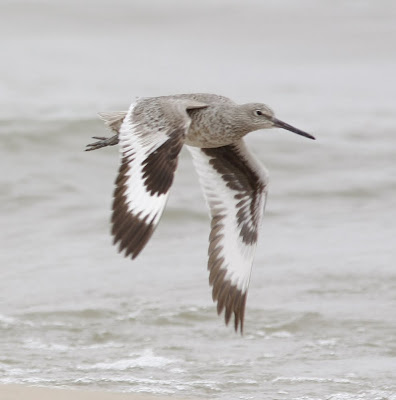 Here's another big time crop of the two shorebirds, not a combo seen in the same frame in Michigan very often... 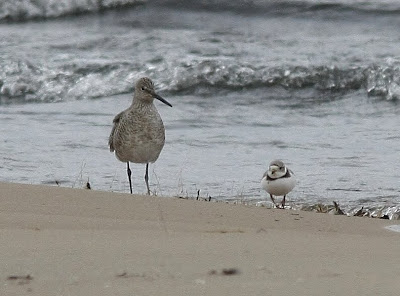