Or maybe it should be entitled Mediocre Pics of Southern Passerines

First off is White-eyed Vireo. 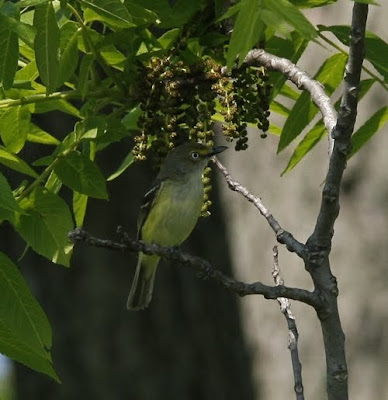 I found him randomly while killing time at the little park next to Ace Hardware while I was waiting to pick up Hazel from school. I heard a call that sounded like a backwards Scarlet Tanager. It sounded a little off, but the tree was in nice light so I stopped. I saw a green bird flutter and thought, "darn, a female" though the next thought was that it was way too little to be a tanager. I raised the camera and was pretty surprised to look into that white eye. It's a-purrrrrrrrr-chk call was pretty close to the chk-burrrrrrr of a Scarlet, if only it was backwards. I hope to go back to do some recording of it since they can have pretty complex songs.

Next up is quite possibly the worst picture that anyone has had the shamelessness to post of a Worm-eating Warbler. 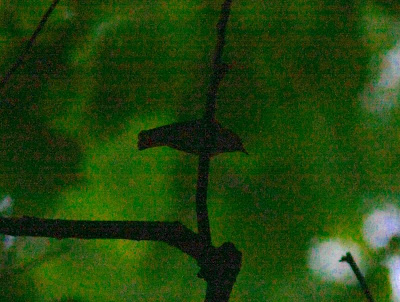 It's basically a record shot to show that the silhouette wasn't a chipping sparrow.

A Chipping Sparrow sonogram recorded in the parking lot is on the left (with a robin singing below it). In its song it rapidly switches back and forth between a high note and a lower one at a rate of about 20 notes/second; the high/low cycles occur 10 times per second. The photographed Wormer on the right (with a pewee's pee-a-weeeeee beside it) sings mainly with a similar pitch (though does have some higher pitched harmonics), and also about 20 notes per second, but it's not alternating pitches. Instead it hammers out both pitches at once so there's no cycling and the tone is much dryer. In sonograms, horizontal lines are musical notes (like the pewee), vertical lines are dry. The Chippie doesn't have much slant to the notes, but it has more than the Wormer does.

Finally is a Kentucky Warbler that Tim had somewhere in Warren Dunes. 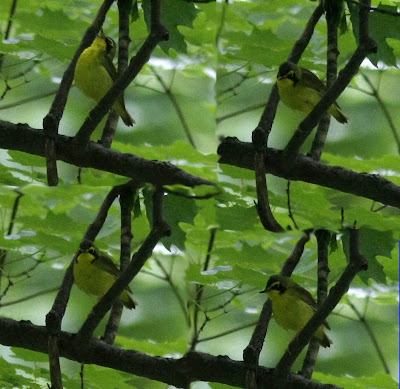 He called me saying he had a Kentucky. I asked where. There was a deep inhaled breath from the other end of the line. If you've seen the movie True Romance where some mafia hitmen are asking a stoned early years Brad Pitt for directions and he says something to the effect of, "well you go ... then you go some more ... hey can you pick me up some beer and ... cleaning products?" except without the beer and cleaning products part, then you have what we had to work with. I hemmed and hawed and then realized I could hear the bird through his phone. I figured if it was that loud I'd be able to hear it if I was at all close.
It took a while to get at all close. Tim guided me in via cell phone as we triangulated a Barred Owl that called once, some crows we could eventually both hear (just gotta make sure you chase the right crows), and eventually a sora imitation. It still took about 2 hours, 4 slip-and-falls on deer trails, and 1 tick to find the spot, but successful in the end, leaving Connecticut as the only hard warbler remaining.

Matt, if your Worm-eating Warbler is the worst photo ever posted on a blog, then I'm tied with you when I posted my Cerulean Warbler last summer. Nice post of some good birds. I like the way you have the ability to show vocalizations and also the way you can piece images together to show a variety of poses.