Things came together remarkably for Tim, Craig Bateman, and Kevin Welsh and myself on Saturday's Birdathon. We weren't really expecting to get a serious crack at the record, but a number of things helped us more than we were considering. 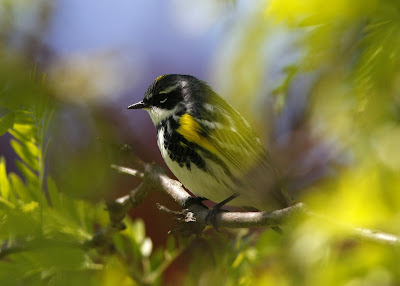 Yellow-rumped warbler is one of the early passage migrants. We've never missed it, but it's always been a hard bird, at least once we only had one the entire day. We had several yesterday. Ditto for Palm Warbler. There were a few birds, such as Red-breasted Nuthatch, Hermit Thrush, Brown Creeper, and Blue-headed Vireo which I've never seen on Birdathon; we had them Saturday with the earlier date. The early migrants made up for things like Summer Tanager, Orchard Oriole, Grasshopper Sparrow, and Chat which we didn't go into the day with a staked out location for. But, the experience of running these days helped, by having a lot of possible spots for them or keeping our ears open, we found each without knowing exactly where we'd find them. 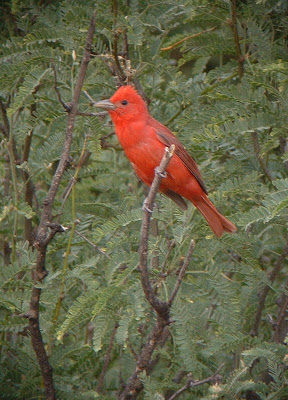 As the background suggests, this is a file photo from Arizona, an especially fun one which I picked up picky-tucking seconds after Tim asked me if I needed my hearing checked with my usual failure to hear the Yellow-throated Warbler the first 8 times it sang.


2. Some other numbers were in our favor, there's 3 more resident birds that weren't possible when the record was set: the Chuck-wills-widow that's returned for about the 5th year, the Fish Crows we found last year, and the Collared-Doves we re-discovered earlier this year; we managed 2 of the 3. This was also the first year we've had a 4 person team. My experience is that 2 people will see about 10% more birds than one, a 3rd person will add maybe 5% more, a 4th will add a smaller percentage. We've never had a problem with the 95% rule with 3 people so figured it'd be worth expanding which was probably also good for a couple birds.

3. For the first time ever we were free of precipitation and high wind. The temperature stayed cool through the day and we were able to add a few passerines during the midday that would have been more likely to quiet if it had been hotter.

4. Tim had some just pure tour-de-force moments, directing some spur-of-the-moment stops that produced birds like Grasshopper Sparrow, Sandhill Crane, and then in the afternoon jogging down the trails in the Sarett pines, disappearing into a particular thicket, and popping a Hermit Thrush out into a trail-side pine. I asked him how he'd found that bird and he simply asked, "Do you know how much time I've spent in the pines?"


So the question is what's next. We had a couple misses, I couldn't believe we missed Mourning Warbler since they've definitely been at Floral this year, Wilson's and Bay-breasted were probably found by decent numbers of teams. Two stake-out birds, Collared-dove and Dickcissel no-showed for us and there were a few birds on Avery Rd that we missed as well. 175 is probably possible; over 200 different species were recorded that day (and a few more the day before as well).
Posted by Matt at 5:05 PM