... though you wouldn't know it from the 85 degree temperature today.
I went down below the house this morning again hoping to find an orange-crowned without success.  There were tons of kinglets though and good numbers of yellow-rumped warblers, solid signs that the fall passerines are winding down.  Pretty much only winter wren, fox sparrow, hermit thrush, and ultimately purple finch remain with greater numbers still to come.
I checked Tiscornia at midday.  There was no sign of waterfowl movement at all though the sanderlings were starting to attain winter plumage.  The sanderling on the left is a pretty typical appearing juvenile while the second bird has nearly completed its moult of the back and scapulars.  Only a couple juvie scaps remain.  Interestingly it was easily a size larger than the other bird, perhaps it fledged in an area rich in food and got a little ahead of most of its cohorts.  One other bird was about half way through its moult. 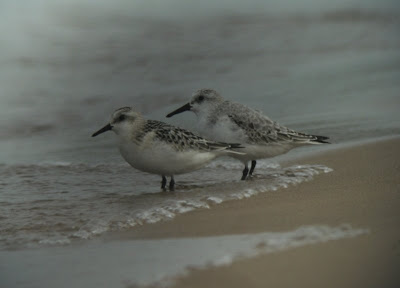 This dunlin alternated between being way to far for decent pics and then would settle down at head and shoulders distance.  In the full resolution pic you can count about 20 eyelash feathers on the lower eyelid and about 35 on the upper.  The dunlin is obviously in pretty full winter plumage (with the exception of one or two feathers at the upper bend in the wing).  They moult up on the breeding grounds before migrating, leading them to be the last shorebird to come south in numbers.  I have seen juvie white-rumpeds and juvie long-billed dowitcher later than this, but I have at most a week to try to find one of them for the Bigby year before I have to write them off. I work, however, all daylight hours the next 2 days, I'll probably miss a decent north wind or migrant push after the front comes through tomorrow.
Posted by Matt at 4:47 PM