tracks in the sand

"One, two, three, four, sive, six, seven, eight, nine, ten, leben," Hazel counted out as we walked down the beach a couple days ago.  I looked down to see her pointing at the footprints of a retreating sanderling, dashed off on perfectly moistened sand.

I'm not sure that I've ever noted such clear tracks from the 2 ounce birds (per Sibley).  It's interesting how much they toe in.  Are all birds "pigeon-toed?"  You can also see there's basically no sign of a hind toe.  I think I read somewhere on the internet that's nearly unique amongst the sandpipers.  I couldn't find explicit support for that in either Sibley or Hayman's Shorebirds of the World, though it is suggested by their illustrations.
As I headed back I noted another completely backlit sandpiper on the beach, somewhat smaller than the sanderling, and had to hurry past it on the dry sand to get a decent look.  It turned out to be a fairly late Baird's, to my knowledge only about the 2nd October record for Berrien this decade. 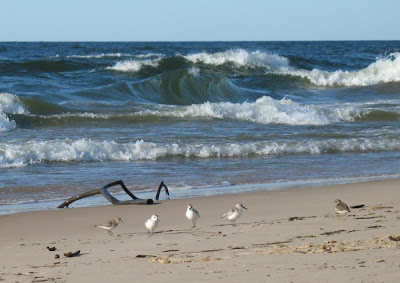 The Baird's is the left-most bird with 3 sanderling in the middle, then a semi-palmated plover on the right.  This could be the first time I've had 3 different species of shorebird in one photo at Tiscornia (where's a decent mudflat when you need one?).  At least the beach gets points for prettier backgrounds.
There were considerably fewer birds today on an official Lake Michigan count with birders spread up and down the Lake Michigan shoreline.  The most interesting bird was a Cooper's hawk that flew straight in off the lake and went directly over the heads of the BBC field trip.  The best birds would have been 3 smaller geese in with a flock of Canadas that unfortunately went inland about a mile to the north.  They were most likely cacklers but it was impossible to be certain at that distance.
Posted by Matt at 7:49 PM

Labels: Birding with the girls