why savannahs shouldn't have roads

Unfortunately, today's road-killed specimen was my fault (yesterday).  Driving home from Hazel's tumbling class ("that was FUN, daddy.  I LIKE fun"), two birds popped up from the roadside, one went straight up, the other inexplicably dipped somewhat and before I could get to the brake it went bounding off the car.  I circled back hoping it would be a house sparrow, but found this little guy instead: 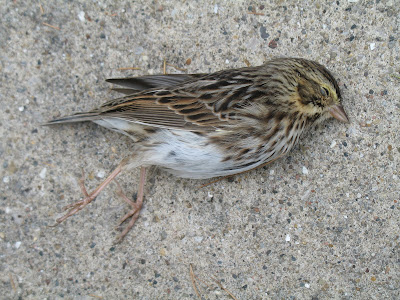 The first thing I noted as I slowed past it, was the somewhat rufous-edged (in the sun) secondaries and my initial thought was "its way to late for a Henslow's." Looking at the entire bird I could see it was a bright little Savannah sparrow.  While savannahs have much shorter tails than something like a song sparrow, the angle of the photo somewhat shortens the tail even further as I was trying to get the face and the wing in the same focal plane.  I don't have a Pyle guide (maybe Christmas...  ) but songbirds usually moult their body plumage once a year and the wings once or twice yearly.  Comparing this bird with the next photo (taken in May a few years ago) you can see how the yellow lore becomes more prominent with wear while the malar area becomes whiter.  The flank and side streaks become more distinct as well.  You can also see how the areas that are rufous in the greater coverts and secondaries are worn off, adding to the much paler appearance that most of us are used to when we picture a Savannah sparrow in our heads: 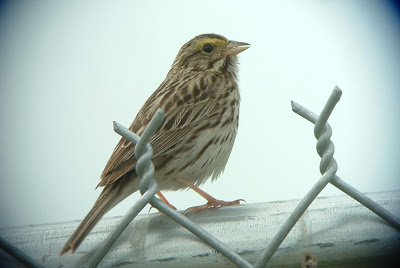 Chain link fences aren't really ideal perches photographically speaking, otherwise the second pic would be much nicer (maybe should try to photo-shop in a nice rustic-looking fencepost some winter night).
Posted by Matt at 12:01 PM