seet, seet, seet does not an orange-crowned make

I finally finished up a string of night shifts (which neatly blanketed about 3 straight days of beautiful NW winds/gales) and headed to Tiscornia with the family this morning.  Predictably I didn't see much sign of migration with SE winds, but a flock of snow buntings drew me to retrieve the scope from the car.  They weren't very cooperative, though this bird landed about 15 feet from Ginger and the kids while I was moving off towards the gull flock (if you call about 8 birds a flock). 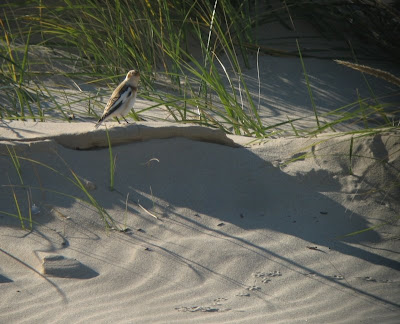 During naptime I headed down below the house in the ongoing quest for a Bigby orange-crowned without results, though a group of fox sparrows (along with a few whitethroats) popped up from a honeysuckle thicket.  Unfortunately the one that perched up was in pretty dark shade and shooting at 1/60th of a second made for not-so-sharp images of another species that I'm yet to acquire great pics of.  I stood there for a while trying to figure out which seeh-seeh came from fox sparrows and which seet-seet came from white-throats without a lot of luck. 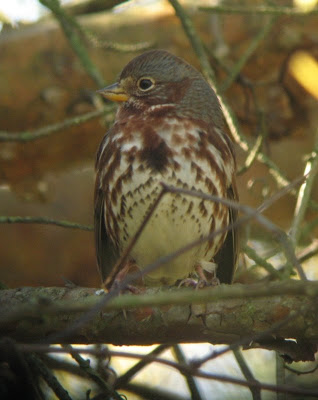