a photo quiz ... and semipalmation

I went down below the house again this morning in my ongoing search for an orange-crowned warbler for the Bigby year.  The last 2 years I've seen them in the fall without really trying, but this year, try as I might, I've been striking out.
Here's an inaugural photo quiz for the blog, we'll explore some of the many facets of bird mis-identification, of which I can be quite the expert.  The theme of this one is "you see what you expect to see:"  I'll post the answer in a couple days. 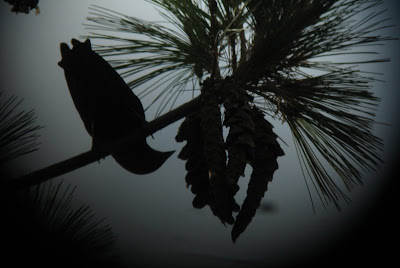 In the afternoon during naptime I went down to Tiscornia after a black-headed gull disappeared about 30 miles north.  There was no gull movement at all though about 250 scaup went by along with a few dabblers.  A black-bellied plover was on the beach feeding near the pier. 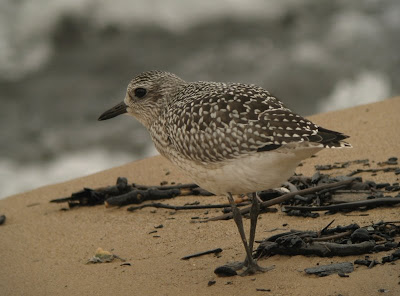 A semi-palmated joined it as well.  I'm not sure where the semi-palmation is, I can't figure out if the little flap of skin visible on the back foot between the inner and central toe is the part that is webbed or not webbed.  [Addendum: having pulled Hayman's Shorebirds off the shelf, I see that semi-palmated refers to the webs being partial rather than only part of the foot being somewhat webbed ... so ... that tiny little flap of skin is indeed the semi-palmation the bird is named for, present between each of the toes.] 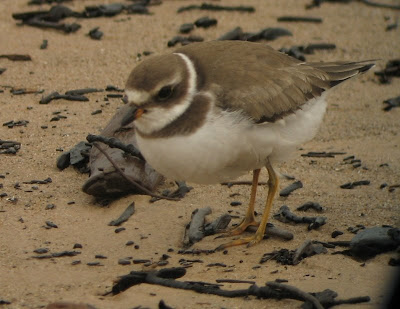 Hopefully the north winds tomorrow will bring that gull down to Tiscornia...
Posted by Matt at 1:39 PM