someWHERE over the rainbow ...

... there probably existed a rare bird. 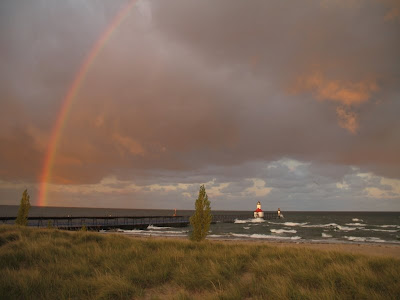 Except for the first snow buntings of the fall (and the first for my Bigby year), despite N winds (probably NNE), there seemed to be less movement than the last few times I've been to Tiscornia.  There were actually greater numbers and larger flocks of scaup flying north than south.  We did have probably 100 Bonaparte's gulls, but without the hoped-for black-headed.  We???  Actually there was a fairly rare sighting today, that of the Greater Northern Skunkape, one Tim Baerwald, taking a break from counting waterfowl at Whitefish by watching waterfowl at Tiscornia.  Despite the fact that the last 2 times he's returned to the county he brought, within hours, county-level megas (glaucous-winged gull and Nelson's sharp-tail), it was not to be today.  I will spare you a photograph, and leave you with one last look at the rainbow present this morning (it was a full bow before daybreak as I biked in at pretty close to rarity-chasing speed hoping for dramatic pics). 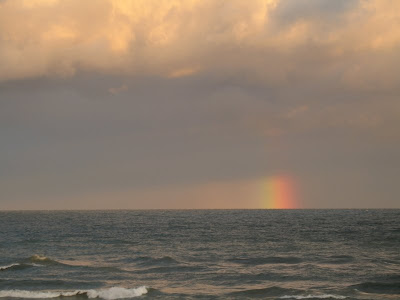