I've been spending a fair amount of time the last few days checking the flooded field at Linco and Scottdale.  Two days ago I checked it on the way home from running an errand and picked out a big pale black-bellied plover standing up over wheat stubble that hides a golden plover much easier.  I went straight home, grabbed the bike, decided not to re-fill the water bottles just in case the minute or so that would take was the difference between seeing the bird and having a raptor scare it off, and rode out.  As soon as I got there I could see that there were fewer birds in the stubble.  The first bird I scoped was a pectoral sandpiper hunkered down peering up at the sky (doh!).  I looked up finding about 3 flocks of birds circling about.  Two of them were clearly pectoral class birds with a plover or two with each and one was a flock of 2 dozen plovers and a few pecs.  I focused in on that one thinking that it might actually be easier to find the black-belly with its black axillaries.  It wasn't, I think because it wasn't with that group of birds.  A couple of the birds were bigger with blotchy black bellies, but these were also golden plovers.  I wonder if most of the birds we see in the Michigan are juvies in crisp plumage as before this year (with more goldens than I've ever seen before) I'd never seen one in blotchy plumage but given that all the blotchy ones were bigger I'm guessing that's the case.  The double whammy was that I couldn't find the raptor either; a peregrine or merlin would be a Bigby year bird.
I biked out again yesterday, and fortunately this time, the black-bellied was back though I saw considerably fewer goldens (though they may have been hidden in the wheat stubble).   A kestrel of all things was panicking the killdeer out of various corners of the field though I doubt was much of a threat.  The black-bellied was good enough to flush up and land right in my scope field giving me a good look at the black axillaries.
The main down-side to this flooding is that it's well off the road and photography is very difficult.  The best I can manage of birds there are heat-distorted record pics worthy only of  thumbnail size viewing in my Word document birding journal.  This black-bellied was photographed in Florida this February, it's much more worn than the birds currently are: 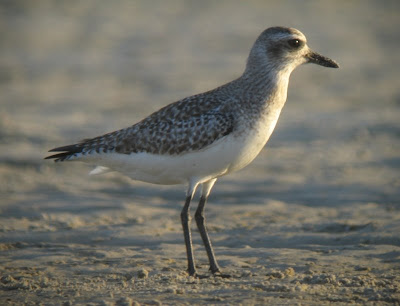 This golden plover was at least photographed in Berrien, in mid-September at Tiscornia 2 years ago: 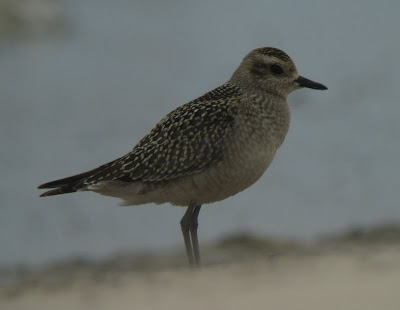 The whitefish point blogs (accessed off www.wpbo.org) have some nice side-by-side shots of the two species.
Posted by Matt at 10:54 AM