Yesterday I spent 2.5 hours at Tiscornia as part of a coordinated lakewatch on Lake Michigan with observers spread up and down the shoreline at a dozen locations from (I think) Muskegon to New Buffalo, coordinated by Chip Francke.  SE winds meant little movement and the morning was pretty much a dud as far as migration was concerned.
A few more species' juveniles are showing up in greater and greater numbers.  This Forster's Tern was right next to a Bonaparte's gull and the similarities were pretty striking: 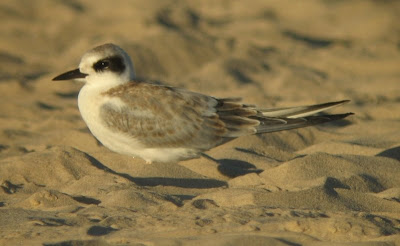 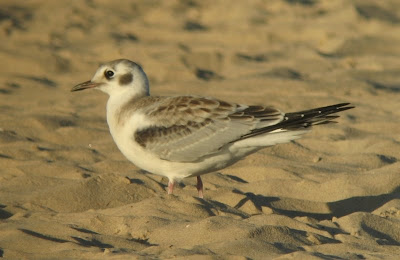 I suppose the question would be whether the split between gulls and terns took place between some ancestor in this size and age-maturation class or if this represents convergent evolution to the birds slowly adapting to similar pressures.
A Baird's sandpiper was much more cooperative than the one last week.  This photo gives a sense of their fairly unique flattened-oval body shape when viewed head- or tail-on, an easy way to suspect this species amongst the peeps from a long distance.  Sanderlings, however, are closer to this shape than most of the peeps, so this trait is not as useful on the beach (sanderlings also have longer tertials than their tails, though again, not to quite the degree of a Baird's). 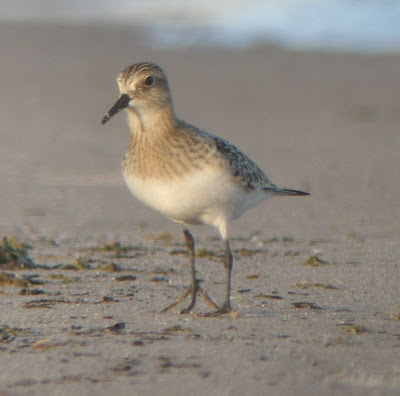 This afternoon I biked out to Brown to finally tally great egret for my Bigby year.  There was one immediately visible as I got off my bike which then ducked behind some loosestrife and cattails giving me momentary panic, but the bird soon re-appeared in the open.  As luck would have it, 2 olive-sided flycatchers appeared as I was waiting for the egret to re-appear.  One flew at the other with a quick-qit-qit scold call that I hadn't heard before.  I managed very poor record pics of both with the digital camera, but not having bothered bringing my scope they aren't very good.  I also re-learned why I have 3 bottles of water on my bike; biking in the midday sun is different from the pre-dawn cool.  Go figure.  SO, in 10 minutes of birding (and 2+ hours of biking) I scored 2 Bigby birds whereas yesterday 2.5 hours of birding tallied none, ah the irony.
NW winds predicted for tomorrow, here's hoping for a big morning at the lakefront...
Posted by Matt at 1:54 PM