arrived at Tiscornia yesterday pretty psyched to find strong NW winds.  The migration seemed hopeful initially as I immediately had a mixed flock of teal fly by.  Dribs and drabs of dabblers continued past through the morning, totalling about 45 each of blue-winged and green-winged teal with considerably fewer shovelors, but that was really the main part of the the movement.  There were no passerines flying in off the lake (and consequently no falcons or jaegers?) perhaps because the NW winds came up to late in the night and didn't blow as many out over the lake from Wisconsin that then struggle in at daybreak to run the gauntlet of various predators and opportunists.
These Forster's terns made a nice study of juvenile and adult plumage.  The adult is moulting into winter plumage, note the white speckling coming into the forehead and the panel of fresh feathers in the wing coverts.  The other point of interest is the darker worn primaries, much darker than the whitish feathers worn in the spring: 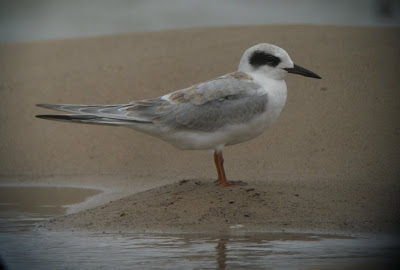 There was a little bit of shorebird migration with about 15 or 20 sanderling accumulating on the beach.  Early in the morning I had found a juvie turnstone and later a juvie semi-palmated plover arrived, but it wasn't until I was practically leaving that I found the first good bird of the day: a buff-breasted sandpiper.  I was trying to photograph the turnstone which had walked past me and as I looked back, what should appear but the bright buff-breast of this little fellow.  It moved about much quicker on the sand than they do at the sod farms.  This was probably the 4th one I've ever seen, definitely a nice bonus given that it would probably be a 2 hour ride to the sod farms, one that I'd pretty much decided I wouldn't make, even if a buffy showed up there!  The photo's not the greatest, it was moving around pretty fast but the bright edged juvie coverts and tertials are well appreciated. 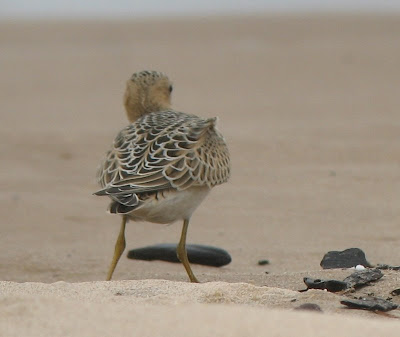