I biked out this morning to Grand Mere to look for gray-cheeked thrush, as I think it's the best place to see good numbers of thrushes (I've typically seen a lot more there than at Floral at any rate).  I got there shortly after "sun-up" but given the overcast it was still pretty dark and I spent the first little while birding from the parking lot where there was more light.  There were clearly good numbers of warblers about, though they were difficult to see well, staying mainly in dense canopy.  There was one bare tree that also held them at times, initially I found my first yellow-rumped's of the fall there, as well as my first palm of the fall.  Eventually it brightened enough to give the woods a try, but looking back there was another bird in the bare branches ... the scope revealed a pine warbler!  This was a bird I'd pretty much given up on finding for the Bigby year, I didn't find one in the tiny pine stand below my house this spring like I did last year, the closest nesters I know about are at least 25 or 30 miles from the house which I never gathered the energy to try for, and it's not a bird I encounter very often in fall migration.  The bird in the upper left was the bird I saw initially, a chunky long-tailed warbler greenish-brown in color with dusky wingbars, pale eye crescents, and a vague yellowish wash on the throat extending across the breast.  I worried for a second when 2 other birds appeared next to it; suddenly I was worried they would all be yellow-rumped, however, the lower bird is an even brighter pine warbler and the upper right bird a palm. 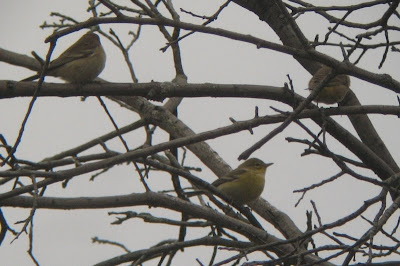 This photo is a cut-and-paste job to show all 3 in quasi-identifiable poses. 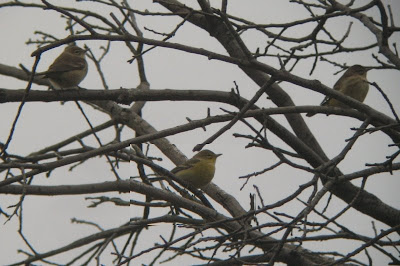 Continuing into the woods, I did in fact find good numbers of thrushes, mostly Swainson's, but with 2 gray-cheeked and one wood thrush as well.  I nearly got a photo of one of the gray-cheeks but it flew off while I was drawing the camera and watching it through the scope.  I probably saw 20 thrushes, about 60% of which would land it a position where they could be identified.  Also in amongst the leaf litter was an ovenbird, a northern waterthrush, and a couple towhees.  Black-throated blue, black-throated green, nashville, chestnut-sided, and the dullest female magnolia I've ever seen rounded out the warbler roster.  The magnolia was very close in color to what a female parula would typically show, but had the typical shape and magnolia undertail pattern to ID it.
The pine warbler and gray-cheeked (along with a pipit the other day on the Scottdale plains) brought me to a round 220 for the Bigby year, and more significantly pretty much completed the forest birds I could expect (with the exception of orange-crowned warbler and purple finch, both of which I should get in the yard, and black-billed cuckoo which is probably gone), so it'll be Tiscornia, Tiscornia, and more Tiscornia from here!
Posted by Matt at 10:54 AM