FIlling in the boxes, Part I

Well, last night I decided to shift some of my strategy.  I've been going to Tiscornia a lot lately, however, day after day of S winds make lakewatches less productive.  Moreover, there's only one bird that I have a reasonable chance to get but upon whom the window is closing fast (black tern), whereas in the woods, there's still two (Philadelphia vireo and gray-cheeked thrush).  I had been planning to wait to go back to Floral until NE winds would give a decent hawk push, but I realized that going today would give me my best shot at the two tough passerine migrants, would put me in the peak of the broad-winged migration even without ideal winds for huge numbers, and would allow me a tailwind on the way home.  Between being excited about scoring some birds, and some sleep and food schedule issues I managed all of 3.5 hours of sleep before the alarm went off.
I made it to Floral in pretty good time, having perfected a route earlier in the year that avoids some tough hills though is a couple miles longer than the most direct (and traffic filled) route.  Upon arriving I realized that I was without my bike lock since I'd just gotten my bike back from a tune-up (Doh!).  I decided to hide it in the woods, walking the line between hidden well enough no one would notice it and still making it findable for me.  I took some photos on the camera of the route just in case...
It took some time to start getting into decent numbers of birds, but as fortune would have it, one of the first migrants I found was indeed a refreshingly bright Philadelphia vireo.  No having to agonize over drab birds over-lapping bright fall warbling's for this bird.  The face pattern was crisp, the bill and tail short, and most importantly sported bright yellow at the upper breast at the junction of the breast and throat (bright warbling vireos are usually brightest about the flanks and undertail coverts).  I circled Floral, getting into a few widely dispersed warbler flocks, high-lighted by a few black-throated blues (including my first male of the year) and probably my personal latest northern waterthrush, as well as some nice looks at a few blue-headed vireos.
This "baypoll" is a bay-breasted, you'll have to take my word that in better lighting it showed some pale bay wash about the flanks.  The dark leg color can be helpful as well (I think there's an insect leg protruding from the end of the bill, when it finally swallowed down or brushed it off on the branch it returned to regularly scheduled warbler behaviour (not perching in one place long enough to be digi-scoped)): 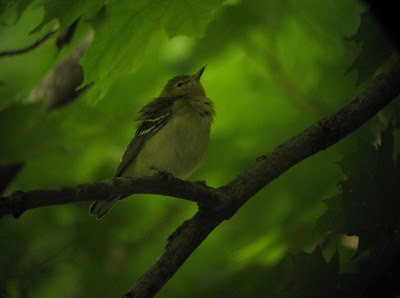 By the time I'd made it all the way around I'd tallied 14 species of warbler (as well as winter wren and ruby-crowned kinglets, definitely a sign I'd been none too soon).
I came across this lifer orchid, the first time I've found an orchid that I wasn't already aware was present (and the first of any sort I've seen in Berrien).  I believe this is some flavor of Lady's Tresses.  Perhaps I'll show them to Hazel next year; I think her reaction now would be,
"I Pick FLOWers DadDEEE!" 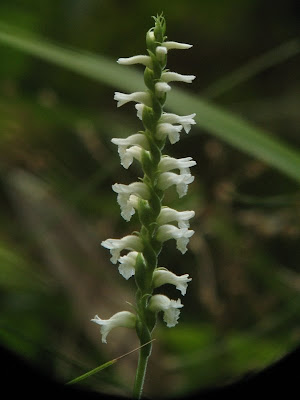 I headed off for the campground dune area (but not before finding a juvie white-eyed vireo (so a black-eyed white-eyed vireo)) and finding out that I'd probably not missed a gray-cheeked thrush by more than about 10 minutes as I came in.  This painted lady butterfly was feeding on the remains of what I took to be Joe-pye weed. 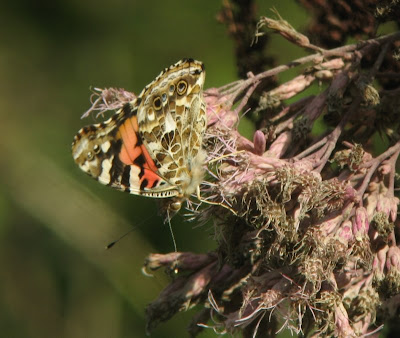 When I finally reached the top of the dune I believe is called Mt Edwards (or Cardiac ridge as I like to call it), I didn't have long to wait to start picking up hawks.  There was a steady trickle of birds, first a red-tail trailed by a Coop, then a red-tail trailed by my Bigby year broad-winged (which is the bird pictured below), a few more redtails, a sharpie, and then off to the north the other bird I was seeking, a first year bald eagle which has been reported mainly in the 2nd dune blow-out to the north, but which I expected would get high enough to come into view.  For whatever reason, eagles are not very common at Tiscornia, in fact I've never seen one there.  I was running out of time since I wanted to check some shorebird spots on the way home (more in the next post) so I decided to leave even though there were still birds moving. 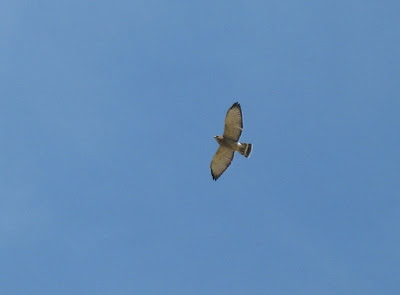 You can see in the photo how these birds' moult is carefully timed as well, not haphazard at all as it is re-growing one symmetric secondary on each side and one symmetric tail feather on each side (note the slight wave in the tail band).
Posted by Matt at 6:39 PM