I checked Tiscornia this evening after work so I wouldn't completely miss a N winds day (and the first clear day after the dregs of a hurricane no less). By the time I arrived at about 4pm there was no waterfowl movement, but there were as many birds on the beach as I'd ever seen including 400+ common terns spread along the beach in 3 large groups. I counted 421 but there's surely at least some error in that number. There were at least another 100 over the brown river water flowing out into the lake. I looked as best I could for a little gull (or any tern that stood out) without finding anything of great interest though I could easily have spent another 2 hours or so to watch the birds turn over more. The juvie common terns had lost most of their brown edging and were distinguishable mainly based on the black carpal bar, though their 2 month old or so primaries were clearly a shade paler than the adults'. Most of the adult birds were developing white foreheads though probably 10% of the birds still sported bright bills and black foreheads. I didn't see any Forster's or Caspians. This pic is fairly representative: 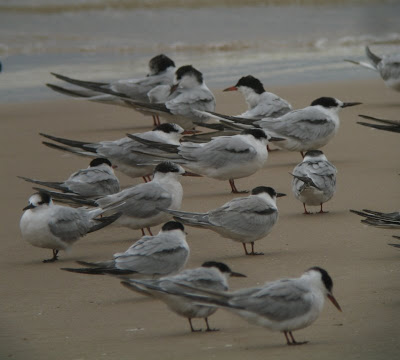 Bonaparte's gulls were also on the beach in greater numbers than they have been. The adults have mostly completed the moult to winter plumage though this bird is missing/re-growing primaries 8 and 9. When that last primary falls out it will have a quite short-winged look and could give an initial impression of a little gull. 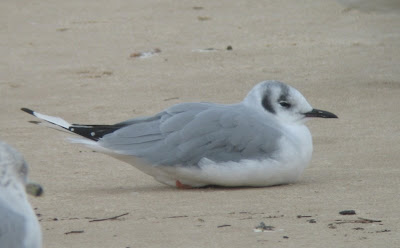 This bird however had completed the primary moult as had most of the other adults: 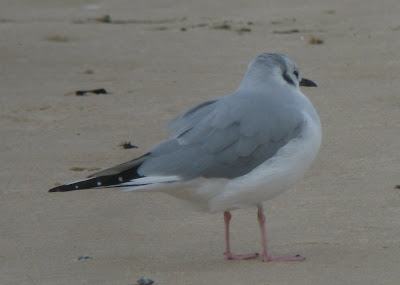 There were good numbers of savannah sparrows in the dune grass. They were obviously freshly moulted as well, given how dark, crisp, and contrasting their plumage was. I wondered in the field if they were maybe a different subspecies than the somewhat paler more washed out birds I'm accustomed to seeing in spring and summer, but per Sibley range maps there's not a different subspecies to the north. I know warblers only moult their body plumage once a year (in fall), with the spring plumage becoming slowly revealed with feather wear, that's probably the case in these guys then as well.
Posted by Matt at 6:44 PM