Ok this bird is cool.  And with travel restrictions making the planet feel bigger as international ares become inaccessible it feels a little bit surreal that I've recently seen them.  They're really like nothing else, enough that I was motivated to pull up some papers on SORA to learn more. 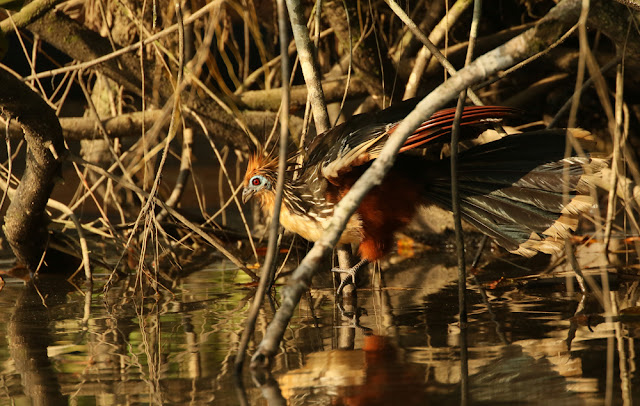 It turns out that they're giant cuckoos.  They're bizarre enough though that they were originally put in the cracid family (turkeys/guans/etc), then moved to rails (!), before egg white protein studies carried out by the elder Sibley showed them to be cuckoos.  Sibley speculated that their foot structure (3 toes forward, 1 back) probably played a big role in their original assignments (cuckoos typically have 2 forward and 2 back). 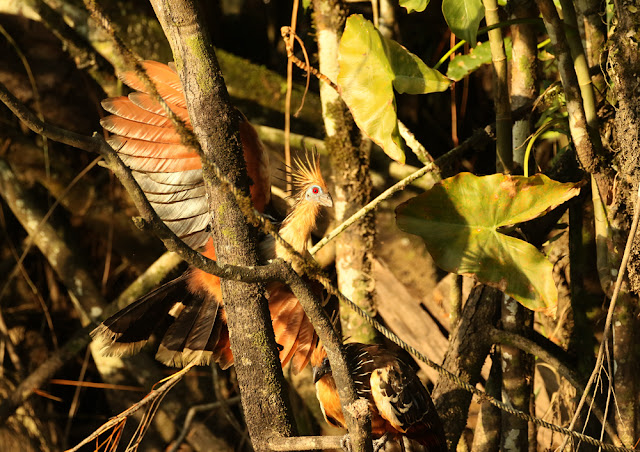 They eat leaves.  Lots of leaves.  And take a completely different approach than any other bird.  Geese eat grass, and the grass, well, passes through the goose in proverbial fashion.  Since there isn't a ton of nutrition in leaves geese pass them through the digestive track quickly to get what they can, move it along, and eat more, ignoring the energy that is stored in the hard-to-break-down plant cell walls.

Hoatzins take the opposite approach and ferment the leaves in a crop that's so big that it takes the place of some of the breastbone and pectoral muscles, leaving the hoatzin a very weak flier.  The crop is big enough that it makes the bird front heavy when full and the birds develop calluses on the skin atop the base of their breastbone from leaning against branches.  And that process takes time.  Some grad students (not sure how you'd pitch this study to someone ... hey!  want to join our lab?  We do Hoatzin Poop Studies!) fed captive hoatzins some undigestable tiny plastic pellets in their feed ... and then counted how long it took the pellets to end up on the floor of the cage.  It took 4-5 days to pass them all (maybe we have a replacement for watching paint dry?), a rate that's much more analogous to some of the herbivorous cud-chewing mammals than to a bird. 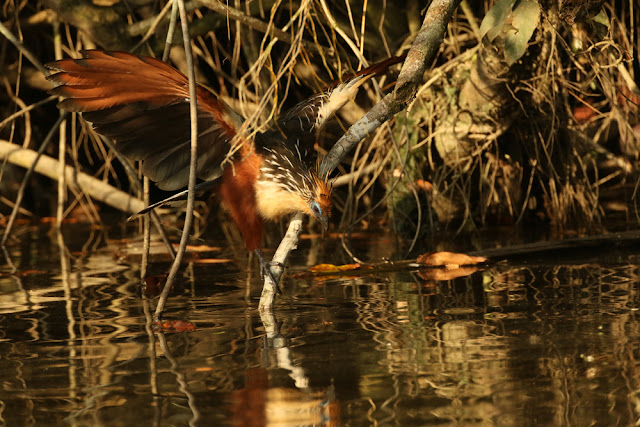 A likely offshoot of trying to raise young on a diet of fermented leaves is that hoatzins often will have helpers at their nest since the younger adults may not be able to produce enough leaf malt on their own to raise young and may help their parents in raising the next year's brood.  Young at nests with helpers grew faster and fledged at higher rates than those without 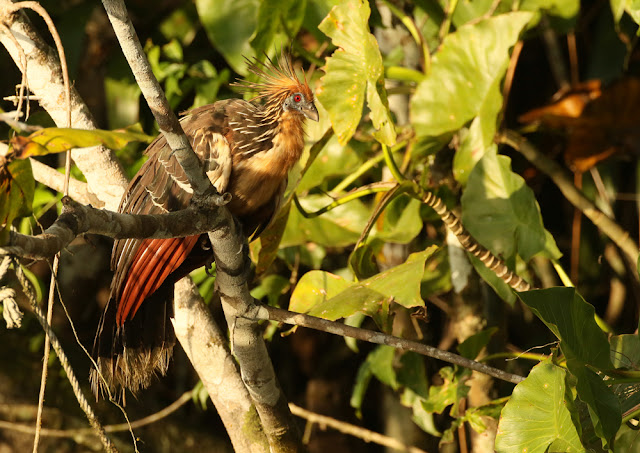 and this doesn't even touch on the babies having wing claws that are useful to clamber about the foliage when young (I forgot to ask Fito or Jason when the young Hoatzins are about).  I guess I'll just have to go back...

References
Grahal et al.  Structure and Function of the Digestive Tract of the Hoatzin:  a Folivorous Bird with Foregut Fermentation.  Auk 112(1): 20-28. 1995.